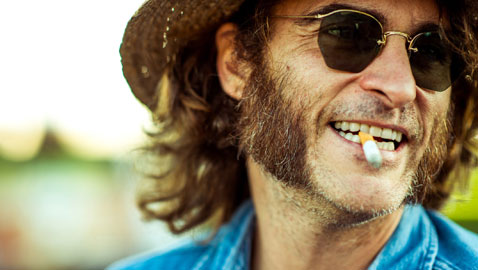 Clearly Paul Thomas Anderson has a thing for the storied eras of Americana, but not quite at their apex. “Boogie Nights” roiled in the rise of the porn industry during the flare-pant, disco-fueled ’70s, while the more nuanced “The Master” took up the arc of an L. Ron Hubbard-like charlatan in the wake of World War II but before America’s “Ozzie and Harriet” salad days; dialing back the clock even further, “There Will be Blood” negotiated the nasty, avaricious early roots of the American oil grab. Anderson’s latest, “Inherent Vice,” is no exception. In texture it’s a threnodial ode to the psychedelic ’60s, free love and rampant recreational drug use, but set early enough in the next decade that the bloody deeds of Charles Manson and his satanic brood remain raw and the Vietnam conflict still hangs on the cusp of becoming the dividing national issue that would define America with such ignominy for so long. 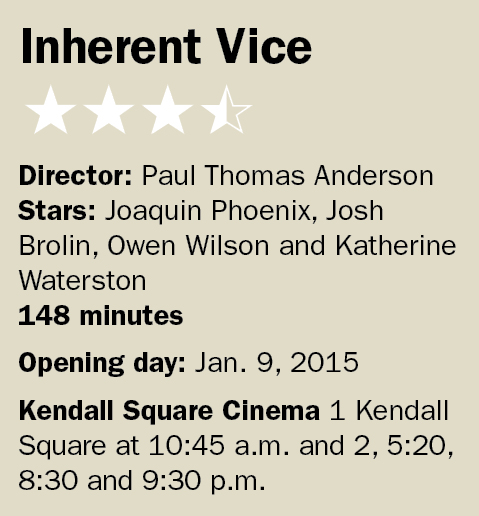 Anderson has always been a contemplative filmmaker with a playful sense of quirk, adept at educing the humanity from the perverse and idiosyncratic. The indie stalwart has also proved his ability to harness the works of literary lions, spinning Upton Sinclair’s “Oil!” into “There Will be Blood” and here delves deep into Thomas Pynchon’s far-roaming 2009 novel – a gumshoe noir on LSD if ever there was one – with baroque gusto. One could argue that “Inherent Vice” is a stoner movie of sorts that could live on in the company of “Fast Times at Ridgemont High” and “The Big Lebowski,” but besides some droll, tongue-in-cheek dialogue and the copious amount of weed burned, “Vice” shares little with those films. It’s true bones lie more in accordance with Robert Altman’s elegiac “The Long Goodbye” and Roman Polanski’s “Chinatown.” The latter takes place decades before “Vice,” but in stature they’re twin-worthy, built around a contemptuous antihero ensnared in a pulpy enigma that pulls a rich potpourri of persona down into a vortex of serpentining madness.

Larry “Doc” Sportello (Joaquin Phoenix) might just be the apogee of the antihero archetype. He smokes so much weed he’s in a continual, near catatonic state and elides and muddles his through matters with disheveled nonchalance. For most, this would be a professional liability or the proverbial nail in the coffin, especially as Doc’s a private eye, but throughout, the scruffy tec, remarkably and gainfully employed, maintains a steadfast commitment to the task at hand and remains cool even as goons come crashing through his door or a naked ex-girlfriend explains how she was a sex slave to a notorious real-estate mogul.

Like “Chinatown,” land rights and family plots lie at the film’s MacGuffin-driven core. Doc’s ex, a nubile hippie chick by the name of Shasta (Katherine Waterston in a breakout role) gets Doc on the hook about her current boyfriend’s wife (a lithe Serena Scott Thomas) and her scheme to shelve her hubby (Eric Roberts) in a sanatorium and take all his cake. Thing is, Shasta goes missing herself and another trippy lass (Jena Malone), after giving Doc a rambling dissertation on the perils of heroin use on one’s dentures, enlists him to locate her husband (Owen Wilson), a jazz musician who may or may not moonlight as a police informant, CIA operative or UFO abductee.

The plot of “Inherent Vice” isn’t as far out as most of its characters, and there may be more breaks into sudden feverish sex than there are doobies fired up. The most bizarre scene features Martin Short as a coke-propelled dentist who acts out his sudden sexual urges with a comely aide. Then there’s Josh Brolin as Christian “Bigfoot” Bjornsen, a flat-topped, hippie-hating, counterculture-squashing L.A. detective who has an estranged bromance with Doc. If you could fuse Jack Webb from “Dragnet” with Nick Nolte and stir in a dash of Ted Cruz, you’d be close. One moment the hammerhead’s beating Doc senseless or kicking in his door and trashing his stash; the next they’re at a comfy roadside dinner and Bigfoot’s ordering pancakes in Japanese.

Of the two, it’s Brolin who bites into the role with greater relish, but on paper alone a sociopathic megalomaniac is far juicier than a burned-out dick. The women – Malone, Waterston and Reese Witherspoon as an uptight DA – shine through in their support of Phoenix’s Doc. With big mutton sideburns and shaggy-dog affability, Doc’s not the kind of guy Raymond Chandler or even Gordon Parks would hang a hat on, but Anderson, whose art form appears to be wide-ranging mini-epics, wraps his auteur arms around his flawed protagonist with warmth and care. “Inherent Vice” isn’t everyone’s kinda trip, but it is righteous fun for those who enjoy the high.