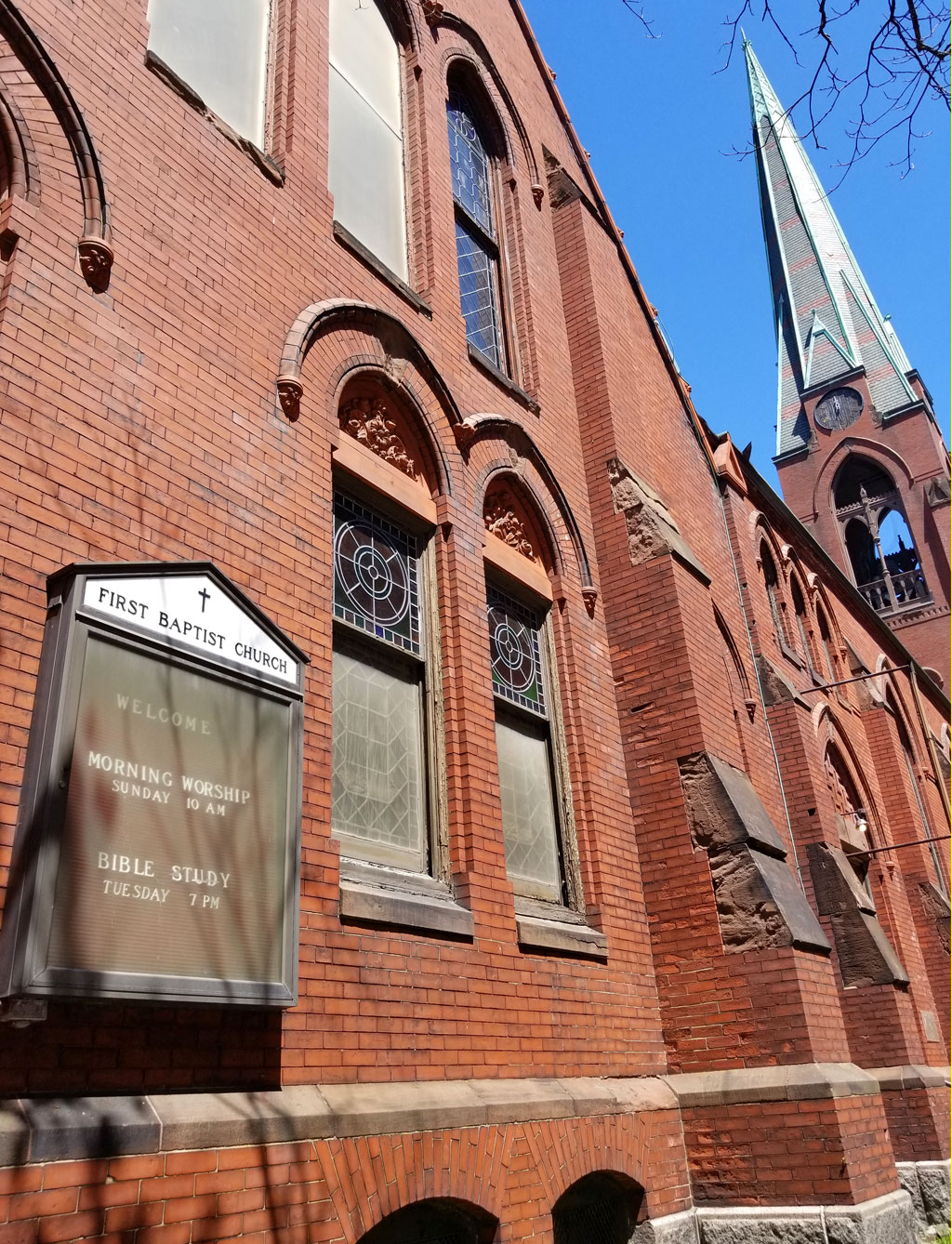 First Baptist Church of Cambridge, at River and Magazine streets in Central Square, is in need of an “extreme makeover” inside, its pastor says. (Photo: Lynx Mitchell)

First Baptist Church of Cambridge has shaped the intersection of River and Magazine streets in Central Square, spires and all, since 1881. But Sunday services and other building activities ended this winter, after pipes burst and the building’s water had to be shut off. The number of parishioners is down to “a handful” who can’t take advantage of the 24,104-square-foot building until repairs can be made, Pastor Henry Johnson said. The only activity inside is from fans working constantly to keep mold at bay.

The church hasn’t been maintained properly since a 1975 architectural refresh and is in need of an “extreme makeover,” Johnson said Sunday.

It’s a dramatic change from less than 20 years ago, when First Baptist welcomed a “healthy number of parishioners” to fill pews for 1,000 at regular worship services, and another 1,200 people for some 30 group meetings a week. The beauty of the chapel drew approximately monthly visits from local and independent filmmakers, according to the Cambridge Chronicle, and there was even another independent church that met in the basement. 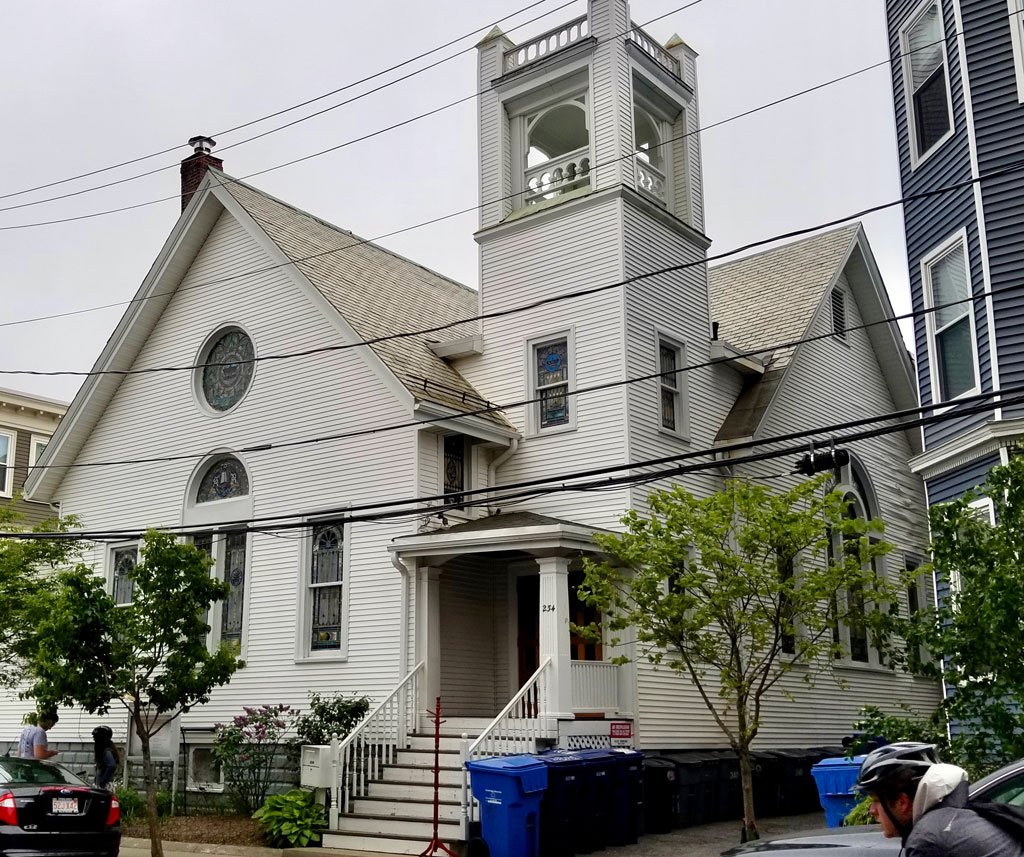 Now Johnson said First Baptist’s congregation has been fellowshipping with Cambridge Community Fellowship Church, which shares space with three other congregations in a smaller, white-paneled church at 234 Franklin St. On Sunday, Johnson was found at CCFC, in a bustling hive of rooms filled with people, while his building sat sealed up and empty less than a block away.

CCFC is a possible partner in renovating the First Baptist building and “rejuvenat[ing] it as a space for ministry,” according to a CCFC worship pamphlet.

The congregation is growing larger than the building can hold comfortably, CCFC building committee co-chair Rachel Dowley said. This was evident at a May morning service: More than 100 people attended, filling almost every available seat – and one member said that between the rain and the Mother’s Day holiday, it was a smaller than usual crowd.

First Baptist and CCFC are different evangelical denominations, but the two share “unity in the essentials and conversation in the nonessentials,” said CCFC pastoral staff member Denise Dawson. The churches have had a friendly relationship for the past 10 years and have partnered on a variety of events, including an October Harvest Festival. Before First Baptist congregants joined CCFC’s Sunday morning worship, CCFC held summer Friday evening services at First Baptist. In March, CCFC congregants helped with a First Baptist “basement cleanup and building stabilization.”

One possibility of many

The churches have floated the idea of deepening their partnership since 2009. Both are autonomous churches with the freedom to make such decisions for their congregations – even CCFC, which is part of the larger Evangelical Covenant Church.

Last year CCFC held sessions for “talking, praying, asking questions and dreaming into the future about a potential merger,” according to its weekly announcements. Dowley remembered a PowerPoint slide from the visioning sessions, with one church represented as a red circle and the other as a blue circle. The slide suggested that if the two churches were to merge, the goal would not be to bring the circles together and blend them into purple, but to make a green square – a church that incorporates elements of both but makes something completely new.

Dawson said that merging the churches is only one possibility of many, and the congregations are still assessing needs and generating partnership options. She said CCFC is committed to ensuring stakeholders have opportunities to share opinions and shape the decision. The churches continued brainstorming in building design engagement meetings held on May 19 and June 9.

First Baptist began as “17 men and 29 women praying” in 1817, but the congregation had difficulty building in largely Congregationalist Cambridge. The churches it did build burned down twice, but the growing congregation rebuilt again; in 1960, when the Rev. Martin Luther King Jr. came to town, more than 2,000 people overflowed the hall to hear him speak.

The current Gothic Revival structure has stood 138 years – but signs of trouble go back at least two decades. In June 2000, city inspectors shut the building down for a week for safety code violations. The pastor at the time said the “inspector happened to come by on the one day that the electricity went out and the fire system wasn’t working,” the Chronicle reported.

Years passed with business as usual, though the number of parishioners was in decline. Finally, this past winter, one attendee described a service of “six of us including the pastor. It was dark and cold due [to pipes] that had froze.” 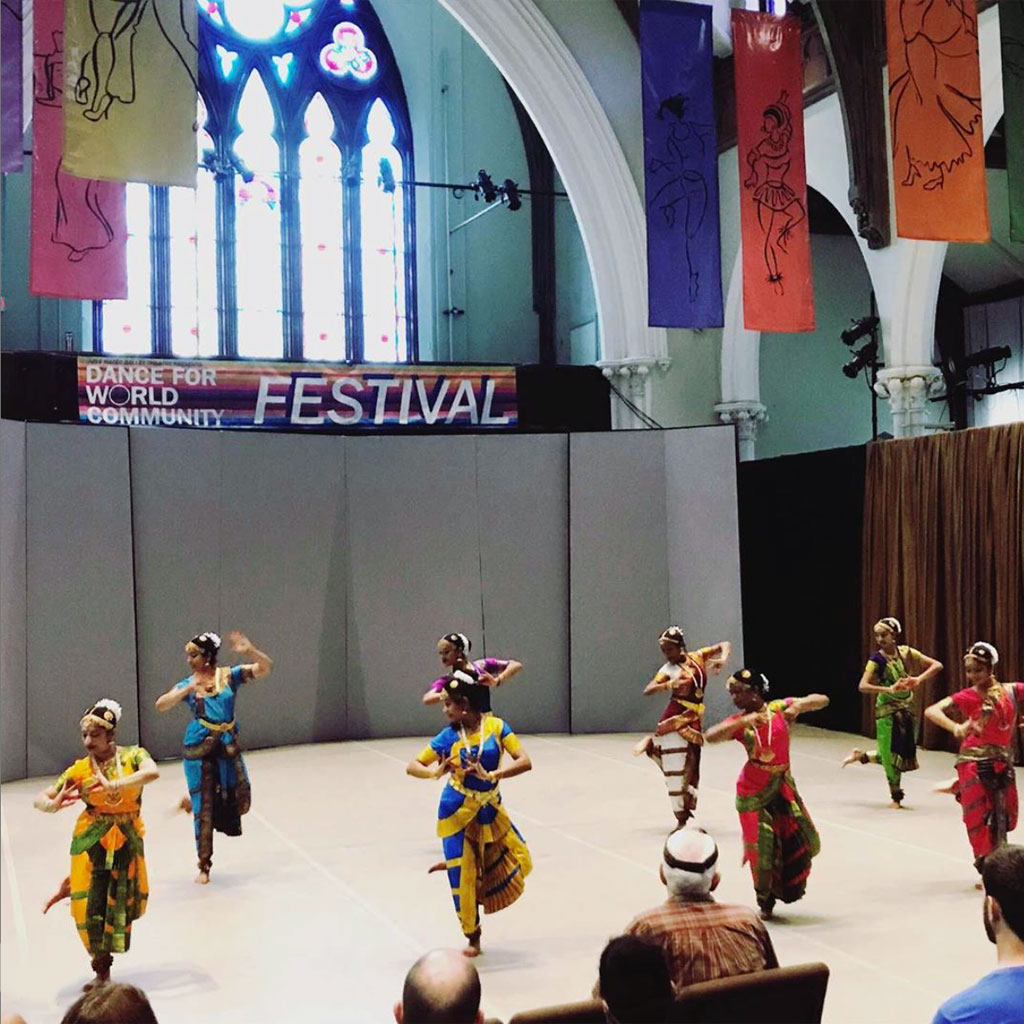 Many churches struggle to pay for building repairs. St. James’s Episcopal Church in Porter Square cited its difficulties maintaining its grounds and missions as reasons to fight more than a decade for a $14 million apartment project. The deal will pump up its endowment even as it sacrifices much of its Nolen’s Knights Garden and crowd a historic Richardsonian Romanesque structure dedicated in 1889.

A congregation that cannot raise enough money from members an apply for Community Preservation Act funds. Many Cambridge churches have since Cambridge adopted the act in 2001, including First Baptist, which got $75,000 in both 2005 and 2008 for “exterior restoration … of roof and masonry” and $56,000 in 2017 to replace a steam boiler.

Old Cambridge Baptist Church in Harvard Square, First Baptist’s daughter church, was established by First Baptist members when the church grew too crowded in 1844. Between 2005 and 2016, it received $244,220 in CPA funds. But it needed significantly more money for repairs and had to get creative, with church officials describing the resources as coming “through private donations, grants from both the city and the state, and grants from business entities to the José Mateo Ballet Theater, a building tenant. In conjunction with the construction of a hotel on an adjacent site, Harvard provided funds to reinforce the roof trusses and the unique stone steeple.”

Churches that do not complete repairs can be a risk to the community. In January 2018, First Korean Church down the street from First Baptist was raising money to repair its church steeple, but damage from a nor’easter forced the city to step in and remove the visibly swaying structure quickly for public safety. 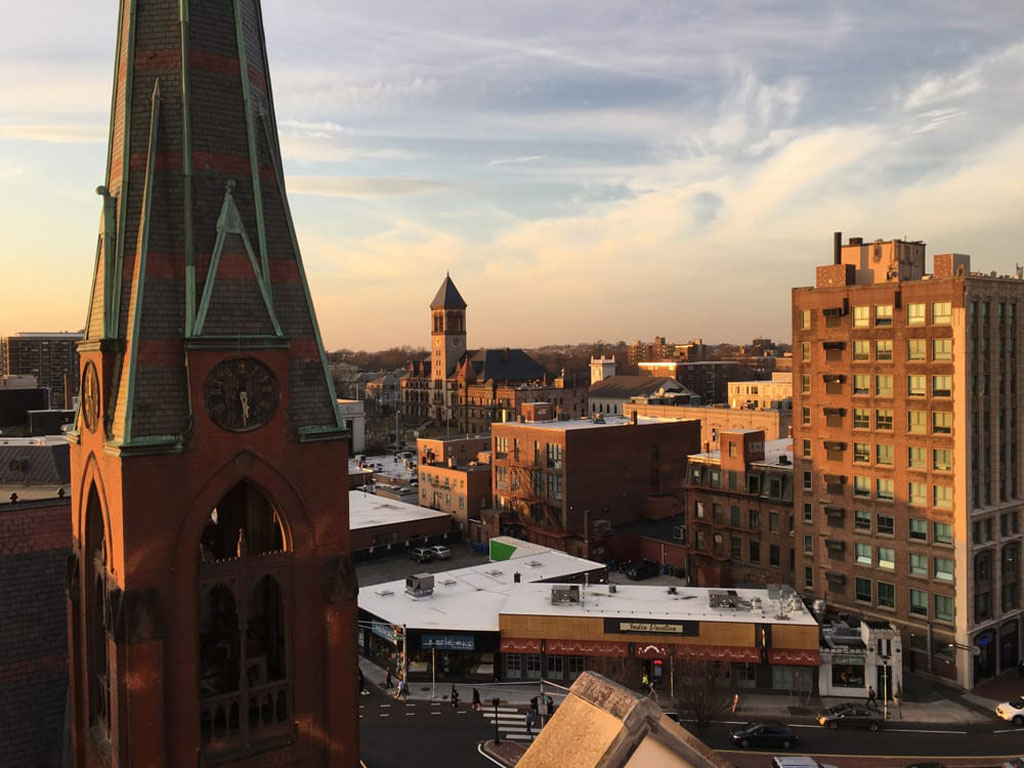 A dormant, unrepaired church can also more subtly affect the economy and vitality of a neighborhood. This risk is accentuated by First Baptist’s prominence in Central Square – as prime real estate with historical value and architectural significance. On the other hand, if the church completes repairs, it could serve as a strong force in Central Square’s revitalization.

“It’s probably the most important building architecturally in the square, and its location is even more important. It could be an animator,” said city councillor Dennis Carlone, an architect and urban planner with long experience consulting with the city before running for office. “The potential is there, [but] its future is tied to mixed-use. I’m amazed at what Old Cambridge Baptist Church has done for Harvard Square.”

While few arts groups might be as successful financially as the Jose Mateo Ballet Theatre, even Carlone’s church rents space to local organizations, and he called opening church doors to theater groups or others one “logical” way to revive the church and keep it integrated with the community.

First Baptist’s pastor Johnson said the church has an architect and expected renovations will be completed in two years. How the repairs will play out in the context of First Baptist’s partnership with CCFC remains to be seen.

But Johnson is confident things will work out. “When churches follow a biblical mandate, how you [run a church] might change, but what you do stays the same,” he said.