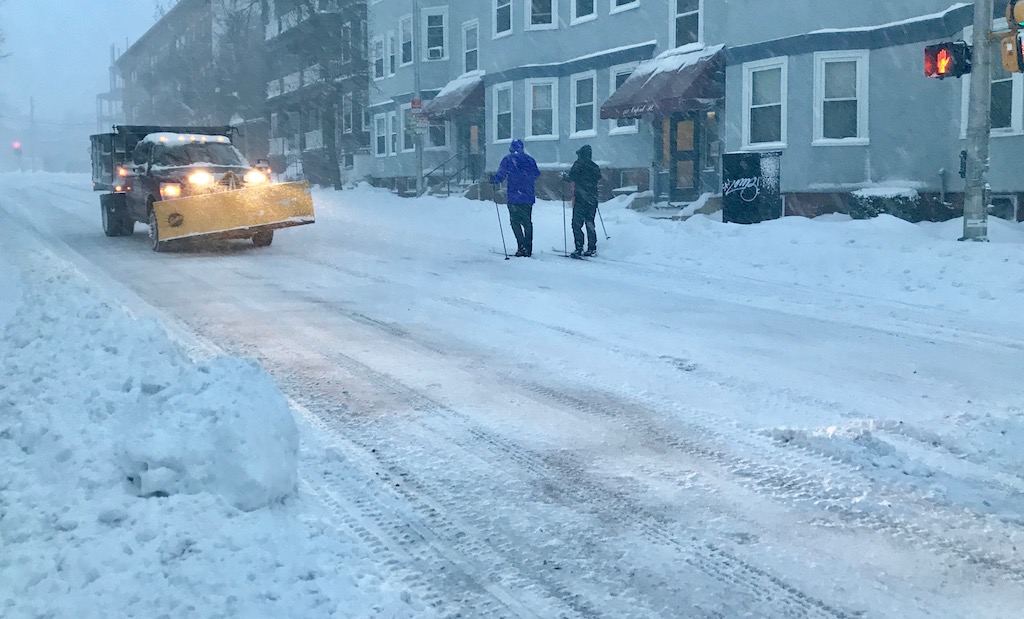 The city survived with little damage from the “bomb cyclone” winter storm that struck Thursday, but the effects will be felt for days.

The biggest danger? Being out as gusts of wind make expected lows of -2 tonight and -6 on Saturday not just wholly unpleasant, but potentially dangerous.

“Our biggest impact now is that we’re looking at really low wind chills over the next couple days, – down near -20 tonight and near -25 for tomorrow night,” said Lenore Correia, a meteorologist at the National Weather Service in Taunton. Winds ranged between 25 and 45mph throughout Thursday, and officials expected the speeds to persist. People were warned by Correia that they can be out “for probably no more than 45 minutes to an hour” before they risk frostbite.

Still, that is as predicted, and Correia said forecasts for snowfall also lived up to the hype of the winter storm undergoing “bombogenesis,” meaning a significant pressure drop that adds to its power. “We forecast pretty well. We said 12 to 18 inches for Eastern Massachusetts and Rhode Island, and that’s really what we’re seeing across most of the area,” she said.

Cambridge saw 14 inches of snow, which took city officials somewhat by surprise. In planning Monday and Tuesday for the storm’s arrival, the first expectation for snowfall was 5 to 10 inches, maybe a bit more, said Owen O’Riordan, commissioner of the city’s Department of Public Works. But the storm was being watched closely, and “once we got 6 inches, especially with the antecedent conditions, we knew that we would have to make preparations for a larger response,” he said today, noting the ice hard-packed snow already on the ground from Dec. 25.

About 160 pieces of equipment have been on Cambridge streets since early Thursday – 100 belonging to private contractors and the rest city owned – first salting and then plowing, with crews working all Thursday and through the night, pausing at about 10 this morning, he said. Crews return to work tonight on plowing and snow removal, and the work could go on through Tuesday or Wednesday night. “Given the cold conditions that prevail, I suspect we’re not going to get much melting, and so we will inevitably be doing more.”

“Maybe not tomorrow night – we may need to give crews a rest. I think people are pretty tired,” O’Riordan said of the snow crews. But residents can expect to see plows and DPW trucks back on the streets Sunday night and perhaps Monday night on streets narrowed by snowfall.

“I think it’s been reasonably successful,” O’Riordan said of the department’s efforts. “There’s a lot more work that we have to do.”

Schools remained closed Friday, though municipal and some other offices and services opened – a sign that the storm had been far from catastrophic locally.

Cambridge was spared fallen branches and trees that are more common in fall, when snow adheres to leaves and freezes; the power outages that result, with only about 60 households lacking power at one point Thursday night; and the flooding seen on the Cape and Islands and in parts of Boston, as the city is upstream of two dams. But taking into account just the snow crews and the mechanics and administrators staffing his department during the snow emergency, “it was an expensive storm,” certainly costing well into the hundreds of thousands of dollars, O’Riordan said. 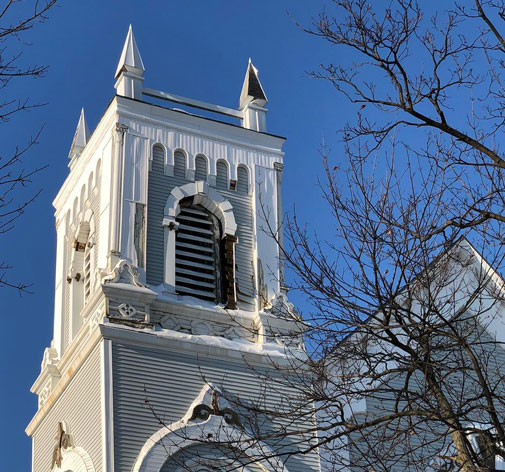 First responders and other city departments were also on call during the storm, with firefighters dispatched at 7:25 p.m. to answer the calls of neighbors concerned about the steeple of the First Korean Church at 35 Magazine St. in Cambridgeport, visibly swaying in the wind, according to an email from Lee Gianetti, the city’s director of communications and community relations. Inspectional Services workers and other city staff gathered Thursday night and again this morning to assess the steeple, now taped off by police, which the congregation had already identified as needing repair.

“It is obvious there are significant structural issues that present a public safety hazard, and it was mutually agreed the steeple in its present condition must be removed,” Gianetti said. The removal was expected to begin early next week, and the area will remain cordoned off in the meantime.

In one, a Foster Place resident “reported being punched in the head by a resident of Foster Street over a dispute about the placement of snow,” Warnick said.

During the snow emergency parking ban, which began on certain marked streets at 6 a.m. Thursday and was lifted at 8 a.m. today, 68 vehicles were towed. The figures suggested Cantabrigians had taken the “bomb cyclone” weather warnings seriously: The numbers have been closer to 100 or so in past storms, Warnick said.

There was little reassurance from the National Weather Service’s Correia when asked about the likelihood of more such weather conditions – now considered extreme in an era of global warming. Will there be more bomb cyclones this winter?