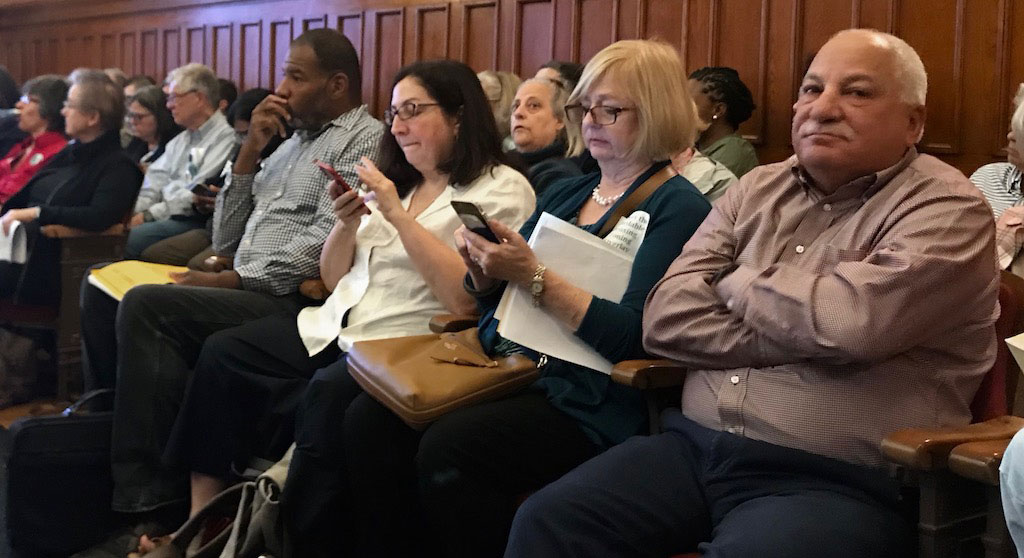 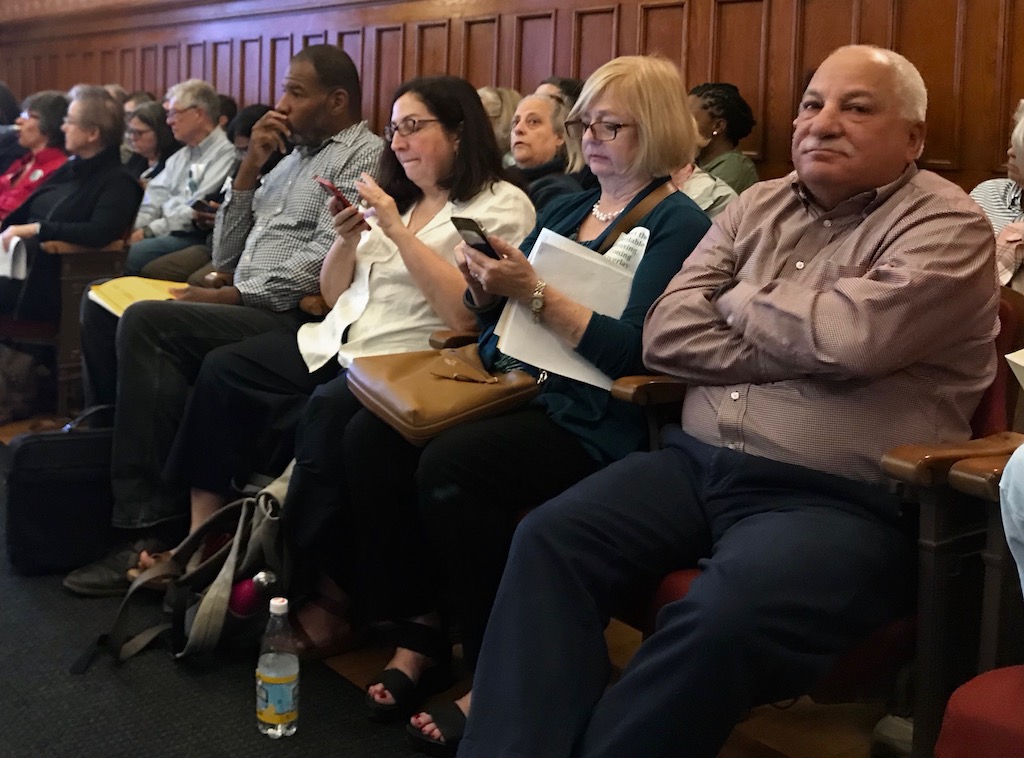 Renderings sent to city councillors to show what a New Street project could look like without their approval of a zoning request backfired Monday, sending the project to an immediate vote that failed 2-7.

“I was deeply insulted to get these renderings of what the developer says can be built as of right,” vice mayor Jan Devereux said, calling them “scare tactics.”

Before Devereux raised the issue of the images – with concerns seconded by councillor Alanna Mallon, who said she was “shocked” to see them Sunday – the zoning had been dragging forward toward a week’s delay as the council absorbed new information about the project’s vagueness and looked to the developer for more information.

That week’s delay would have brought the zoning petition to its do-or-die deadline. With that impossible, the developer delivered the message that it would go back to its original plan and replace a popular Evolve gym with a large self-storage facility on the site. 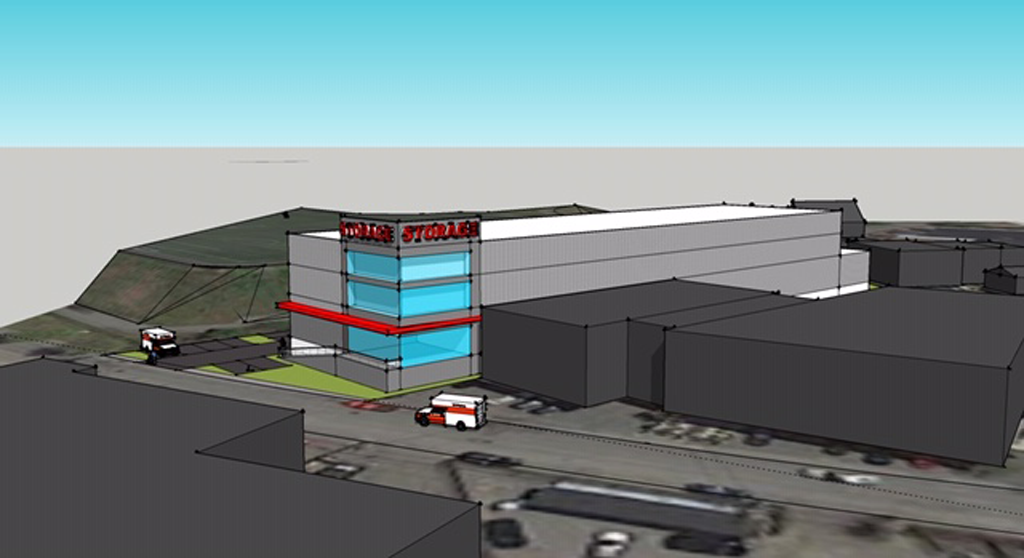 Developers eyeing New Street for a self-storage told councillors they could build this facility as of right.

The plan was for a self-storage facility with a small gym and 22 units of affordable housing next to Danehy Park in Neighborhood 9, presented by SSG Development partner George Bachrach. It was the second go-around for the project, which had arrived in early August 2018 as pure self-storage (called the Pizzuto petition) to questions and criticisms before retreating and reemerging in early May as a mixed-use proposal.

Bachrach did not respond Monday night to a text asking what was next for the project, but sent a statement Tuesday:

SSG Development respects the decision of the Cambridge City Council.  We are grateful for the support of several hundred residents who wrote their councillors on behalf of our mixed use development.  We are particularly grateful for the encouragement of Just-a-Start, the Mass Affordable Housing Alliance and [Massachusetts Association of Community Development Corporations], among others, all of whom are devoted to the cause of expanding affordable housing in Cambridge and the commonwealth.

Devereux said she understood that SSG didn’t own the property, but only had an option on it; if figures for a viable storage facility described a year ago before the Pizzuto special permit retreat held true, the sheer size suggested the land on New Street couldn’t be profitable and therefore wouldn’t make sense for the company to buy after all – making moot the renderings sent Sunday, showing a giant block of blank storage next to the city’s premier recreational land.

“The proximity to both Danehy Park and Fresh Pond and to shopping makes it an ideal location for housing. And I am confident that the site would be attractive to a housing developer,” Devereux said.

Under current zoning, the site could hold 80 units of housing, with 20 percent needing to be affordable by law; the self-storage zoning would fall beneath that 20 percent “inclusionary” amount for affordable housing.

Bachrach’s message challenged Devereux’s understanding of the site. “With a mixed-use option now precluded, we will focus on a single-use option, allowed by right, and build a simpler self-storage building to serve the neighborhood,” he said Tuesday.

There were already signs Monday that the plan was breaking down, as Community Development Department head Iram Farooq admitted it was still not clear in a zoning request that was then about 20 weeks old exactly what responsibility the developer had for creating the units of affordable housing it had been touting. “There did not seem to be a commitment to actually building or funding those affordable housing units, which is typically what we anticipate when we see a letter of commitment,” Farooq said. “That was just one of the things that popped into my mind.”

The details that would make the agreement work as “contract zoning” instead of prohibited “spot zoning” remained fuzzy, city solicitor Nancy Glowa said, especially if the developer didn’t plan on seeking public money for the affordable housing but did plan on working with the affordable housing developer Just-A-Start – which gets much of its funding from the city. Spot zoning “would be impermissible if it can be proven,” Glowa said, and this particular contract zoning arrangement was “highly unusual.” Councillor Sumbul Siddiqui, herself a lawyer, said a few moments after Glowa’s initial assessment that to her New Street “still feels like spot zoning, even if it’s legally not.”

As Devereux and other councillors grappled with the fact that the zoning’s effect on a neighboring parcel hadn’t been discussed, even though it was the larger of the two parcels, and that despite the months of examination they were just learning that the developer was not itself building the affordable housing universally considered key to the project, Mayor Marc McGovern argued for another week to try to pin down details.

“I just don’t know what to do with a process that feels as broken as this one does. The Planning Board rejected this thing hands down, and now we are spending staff time and valuable council time to try to make a deal work that isn’t in our interest. We could get a housing developer to buy this site … and we wouldn’t have to be renegotiating uncertain terms and basically funding them,” Devereux said. “I have a lot more stuff written down, but I just I don’t know why we need to spend another week trying to figure this deal out.”

When McGovern moved to table the matter for another week of information-gathering, the vote failed 4-5. Devereux had initially voted “present,” then changed her vote to “no.”

Then she asked for an immediate vote on the zoning, which went strongly against the self-storage zoning proposal. McGovern was part of the votes against, and only councillors E. Denise Simmons and Tim Toomey stood in support.