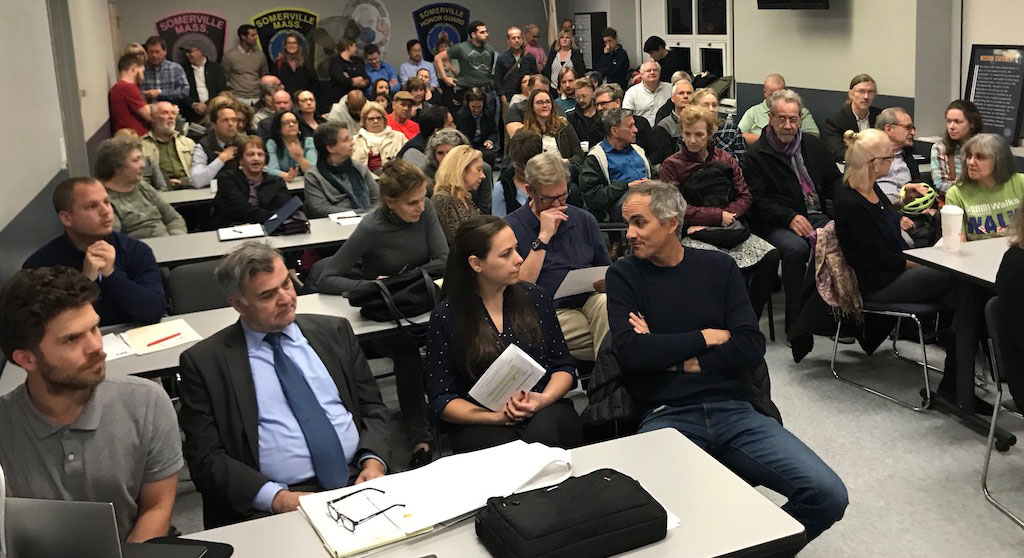 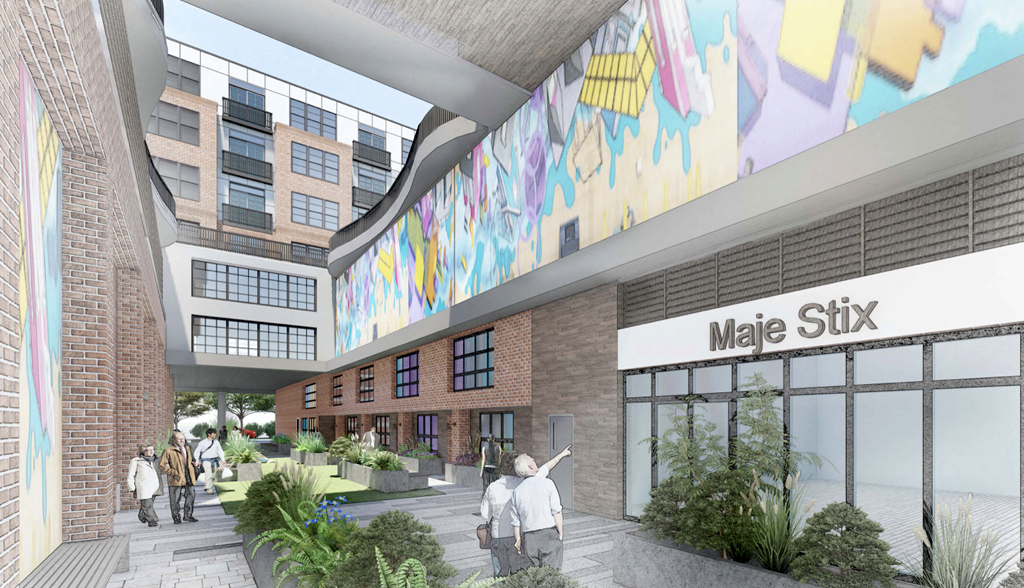 Cambridge and Somerville have each seen Star Markets painfully shut down – in Cambridge’s University Park near Central Square just last year, and in Somerville in Winter Hill, where a years-old empty site on Broadway remains a raw wound. But the chain’s Beacon Street store near Porter Square isn’t going anywhere.

Except maybe up one story.

A standing-room-only community meeting held Wednesday at Somerville police headquarters heard the starting point in a conversation about what might happen to Star Market’s 2-acre lot at 275 Beacon St., now home to a badly aging store of around 26,000 square feet, a laundromat and a 105-space parking lot. 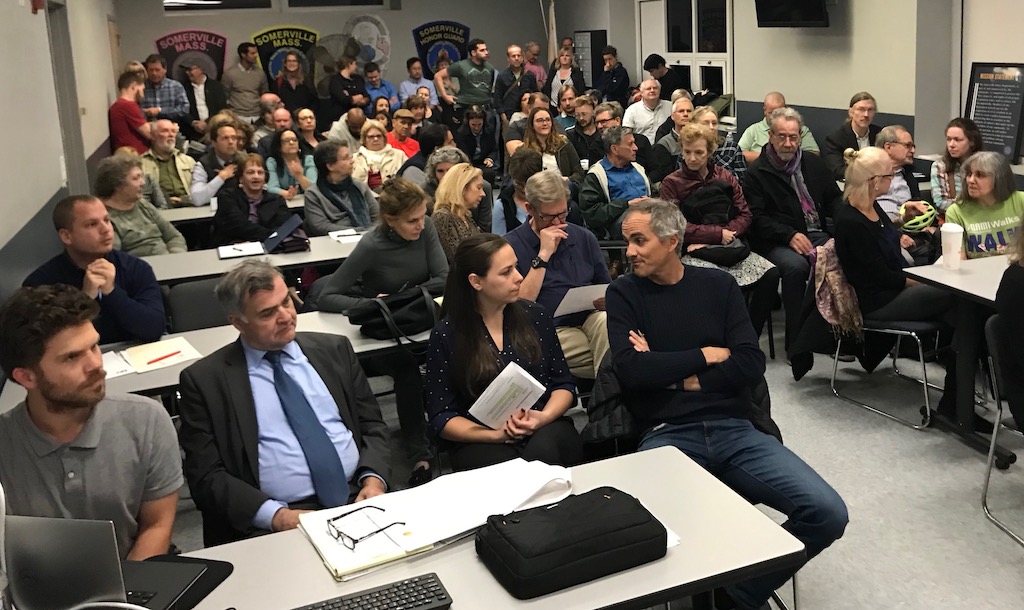 That store would stay roughly the same size but move up one flight, making room for ground-floor restaurants, retail, services and five to 10 live-work spaces for artists and entrepreneurs opening onto a pedestrian “paseo” for a daily stroll of arts, crafts and open studios; there would also be apartments and a parking garage for residents and grocery shoppers.

The Star Market is a sure thing to stay, according to the concept’s presenters, because this process is being led by the grocer. “Star approached us not too long ago with a hope that they could basically rebuild the store as a new, modernized facility,” said Louis Masiello, a senior vice president at WS Development of Chestnut Hill. It bought 275 Beacon St. from Star in 1998 with a 25-year leaseback agreement on which Star not only has several years remaining, but a 40-year option to extend.

But after the relief the news might have brought to Cambridge and Somerville residents who use the store and work there, the meeting went rather off the rails. 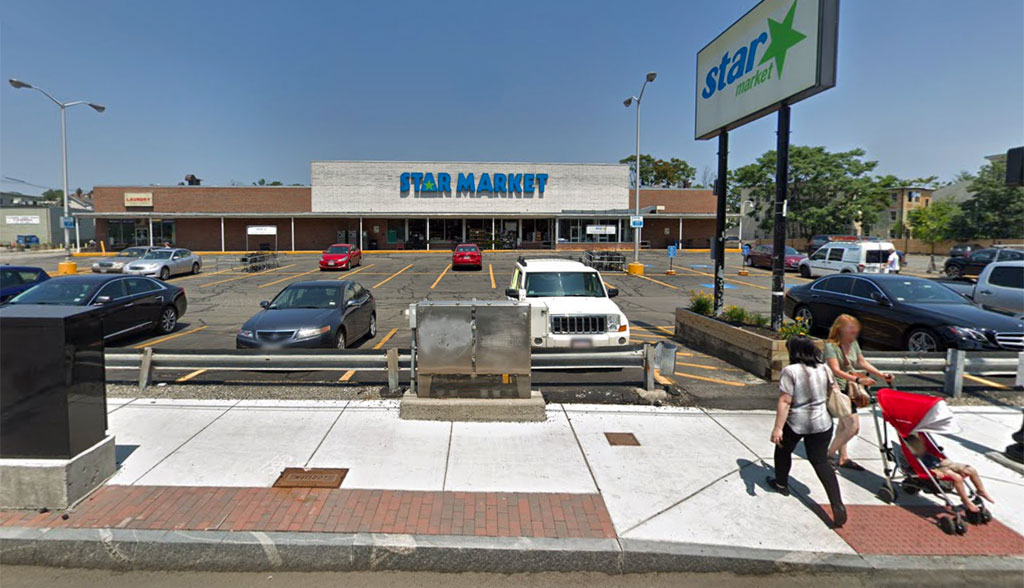 Star Market today, on a lot described by developers as unchanged since the 1960s or 1970s. (Photo: Google)

WS Development and its partners in the proposal, including Khalsa Design of Somerville, were greeted with suspicion, the occasional jeer and even something that sounded a lot like a threat – enough that the maker followed it up with “this is not a threat; this is just how Somerville is” – despite numerous explanations that the preliminary meeting was being held specifically to gather residents’ ideas and opinions before deciding how to proceed. A final design that would decide what permits and zoning variances to seek was at the very least several months away, especially considering potential changes coming to Somerville zoning, according to Britt Snider, another WS Development senior vice president.

“Nothing’s been officially submitted to the city,” Somerville city councilor J.T. Scott said to launch the meeting. “What can we do to make this proposal better? What kind of proposal would you like to see instead? … This is our neighborhood. It’s our canvas. And hopefully we can all collaborate to find what works for the neighborhood.”

Masiello tried too. “I know that often in conversations like this the topic can be stressful and change can be scary,” he said. “We felt it incumbent upon us to bring some sense of what we have in mind, but we don’t see that as by any means complete. We see that this is the beginning of a process where we get to listen and hear from you … not just in this meeting, but for an extended period.”

The reassurances didn’t work. Though team members were already being peppered with questions as they struggled to get through a presentation, it was the revealing of the apartment numbers and the slides that gave first-draft glimpses of the site in renderings that incited chortles of outrage and disbelief.

In addition to the grocery store, live-work spaces and around 15,000 square feet of “curated” ground-floor retail, WS Development suggested putting a mix of 241 studio, one-bedroom and two-bedroom apartments on the site, 193 of which would be market-rate and 48 affordable – meeting the city’s 20 percent requirement.

Laughter greeted the reference to 241 apartments, and one woman could be heard saying, “Are you insane?”

“The community’s never going to let you do so many,” someone else called out.

Soon came the showing of the Khalsa Design renderings, introduced by the firm’s Tanya Carriere, presenting only one concept – and an unpopular one. It came across as dark, massive and boxy in various views, despite a small central green roof and patio and being split in two by the paseo, with commercial uses at the front and four floors of residences and parking in the back. It was greeted with heckles: “It looks like a prison,” one person said. “Really ugly,” someone else called out. 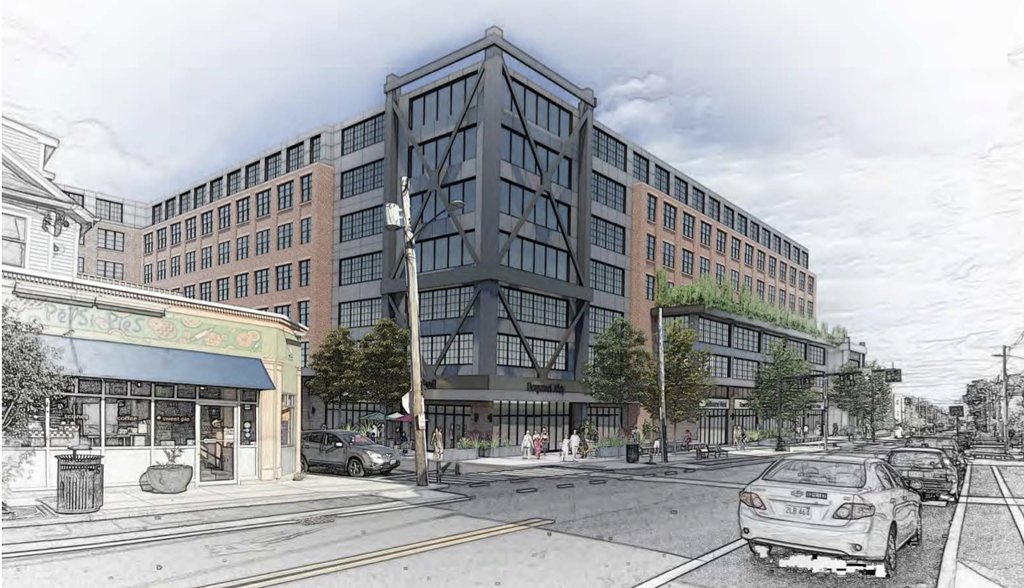 Many neighbors were shocked by the massing seen in one proposal for 275 Beacon St. The Petsi Pies bakery is at left. (Image: Khalsa Design)

The six-story height was controversial for Beacon Street, where residences are primarily triple-deckers all the way to Inman Square. A long-term stay hotel coming to the end of Beacon Street closest to Porter Square is five stories; perhaps the more deflating answer to critics was the existence of a six-story apartment building at 278 Beacon St., directly across from the Star Market – though it has nothing near the massing of the mixed-use concept at 275 Beacon St.

Traffic impacts and parking were more cause for alarm. Only 81 residential spaces were included in the same pitch that included 241 apartments, which could hold still more hundreds of people. And to spare drivers living on nearby streets, it was suggested that no one living at 275 Beacon St. be allowed to have resident parking stickers – a concept still working its way through Somerville’s city council. Neighbors were still alarmed, especially after the loss of so many parking spaces from Somerville’s reconstruction of Beacon Street with bike lanes.

“This is an opportunity”

After two and a half hours, the room was emptying and the questions petering out, though people remained concerned about changes to the tenor of the neighborhood (“This isn’t Kendall Square,” was heard, followed by an argument that maybe it was), rental rates in the proposed building, effects on Star Market employees, an influx of rats and where construction workers would park for 22 months. Scott collected email addresses, WS Development promised to publicize future meetings better and there was talk of forming a neighborhood council or board to let residents be heard more efficiently by developers.

There was also some excitement at the idea of getting a branch library or meeting room at 275 Beacon St. and using the construction as a chance to underground the area’s ugly utility wires. “This is an opportunity to do all of the things we want to do to improve the neighborhood,” Scott said.

When a resident proposed keeping the same basic massing, but putting less toward Beacon Street and more toward the rear of the lot, where there are only train tracks, it was greeted with interest by her neighbors and by the development team. And the same for a proposal to reduce the maze of apartments. “Two hundred forty-one is not a magic number,” Snider said.

A few attendees Wednesday said they liked the project, and that much of it was in line with the city’s SomerVision 2040 goals.