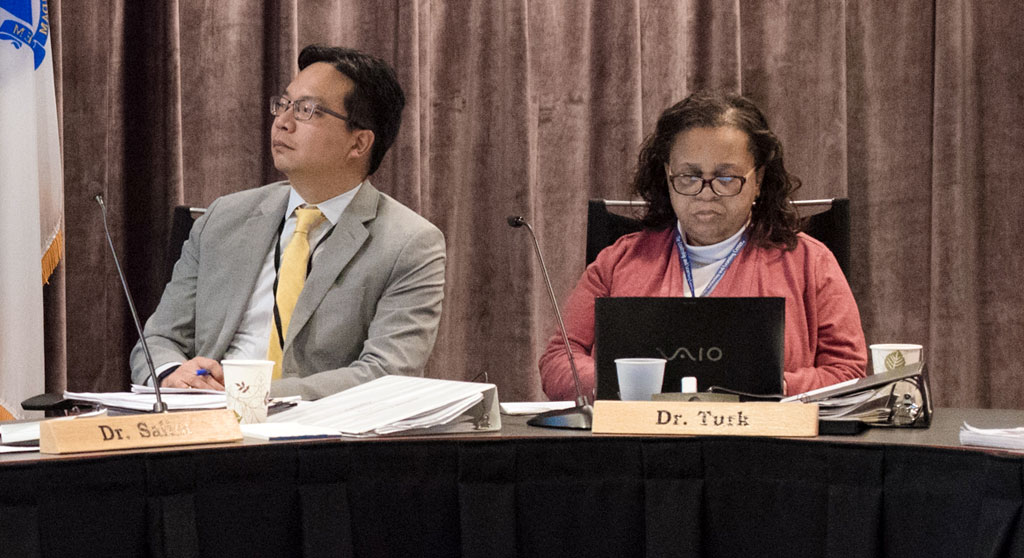 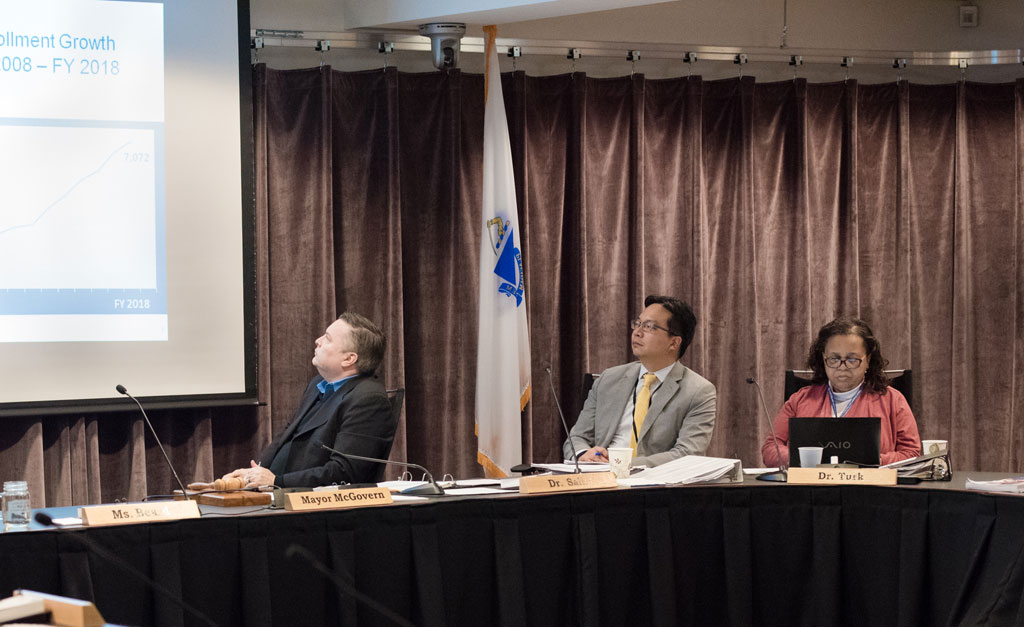 A school district report “and the process leading up to it reek of white supremacy culture and institutional racism,” the Cambridge Education Association says. District superintendent Kenneth Salim and deputy superintendent Carolyn Turk are seen at right with Mayor Marc McGovern in 2018. (Photo: Ceilidh Yurenka)

Though the public version of report on a classroom use of a racially charged term “is less than complete” and was slow to be released, superintendent Kenneth Salim said, the school district has “already begun taking action in response to its findings.”

“We are actively working on improving our process for notifying staff of existing policies and procedures, and will be continuing our efforts to inform students of the process for reporting experiences of bias and discrimination,” Salim said in a Thursday email. “This experience has been painful to many involved, and I believe our community can – and must – learn from this experience.”

The district was able to move ahead though negotiations with a teachers’ union slowed the release of the report to the public, Salim said.

The report, on a January incident in which committee member Emily Dexter used the term in an academic context, arrives before the School Committee on Tuesday for what will likely be a difficult discussion. It notes that history teacher Kevin Dua, in the run-up to holding a Jan. 10 discussion in his Cambridge Rindge and Latin School class titled “Reclaiming: [N-word] vs. Cracker: Educating Racial Context in/for Cambridge,” bypassed a step in the school’s “Teaching About Controversial Issues” policy that could have avoided the controversy.

Though seemingly united in criticism of the process behind the report and its released form four months after delivery by the Boston law firm Louison, Costello, Condon & Pfaff, critics conflict in some of their complaints.

Committee member Manikka Bowman signaled a contentious discussion in a Monday essay published in the Cambridge Chronicle saying she wanted to “take steps to address my colleague’s behavior and engage district leadership on how this curriculum unit was approved.”

The report’s supporting exhibits shows Dexter, who is white, reaching out to Dua repeatedly to express remorse over using the full “N-word” once in reference to terms filtered out of sight from students using district computer equipment. (Afterward on Jan. 10, she used the shortened form of the term.) But Bowman says “Dexter has misled the public to believe she demonstrated remorse to the students” because when she returned to Dua’s class a week later to talk with students, she didn’t apologize outright until “more than 20 minutes into the exchange.”

While the report was “heavily redacted,” Bowman said the committee has seen the full report and viewed the unedited video of Dexter’s visits, and she is “clear [in believing that] these incidents involving Ms. Dexter, our administration and instructional staff demonstrate a severe lack of leadership and judgment.”

More outrage was expressed online, with Planning Board member Corinne Espinoza responding to Bowman’s essay by saying she was “angry at Ms. Dexter for not resigning and for Cambridge voters who overwhelmingly reelected her.” Vassal Lane Upper School math teacher Matt Dunkel called the report “unjust and harmful” and an example of “classic white supremacy culture” and called on followers to show up Tuesday to speak in support of Dua. Like Dunkel, educator Anthea Lavergne referred to the lawyer writing the report as white and put the term “investigation” in quotation marks, suggesting doubts in its legitimacy.

A Cambridge Education Association statement that president Dan Monahan said he intended to deliver to the committee used similar language, saying the “report and the process leading up to it reek of white supremacy culture and institutional racism” and does not hold administrators accountable for their actions or inaction.

Yet while Bowman names the redactions alongside her critique that the report is “focused more on educators rather than providing a holistic account of all parties,” the CEA says “the redactions [in the report] are still insufficient.”

It was the association’s calls for redactions that contributed to delays in the release of the report, Salim said.

“Questions have been raised about the process leading up to the release of a redacted independent report … We have heard concerns that the report is incomplete, inaccurate, misguided or faulty in a number of ways. We have also heard concerns about the long delay between the report’s completion and its public release,” he said.

“The Cambridge Education Association asked to negotiate aspects of the content to be released,” Salim said. “The significant redaction of the report reflects this negotiation process, combined with our legal obligation to protect the privacy of our students and staff members, and the prohibition against releasing confidential student records information or confidential personnel information without permission.”