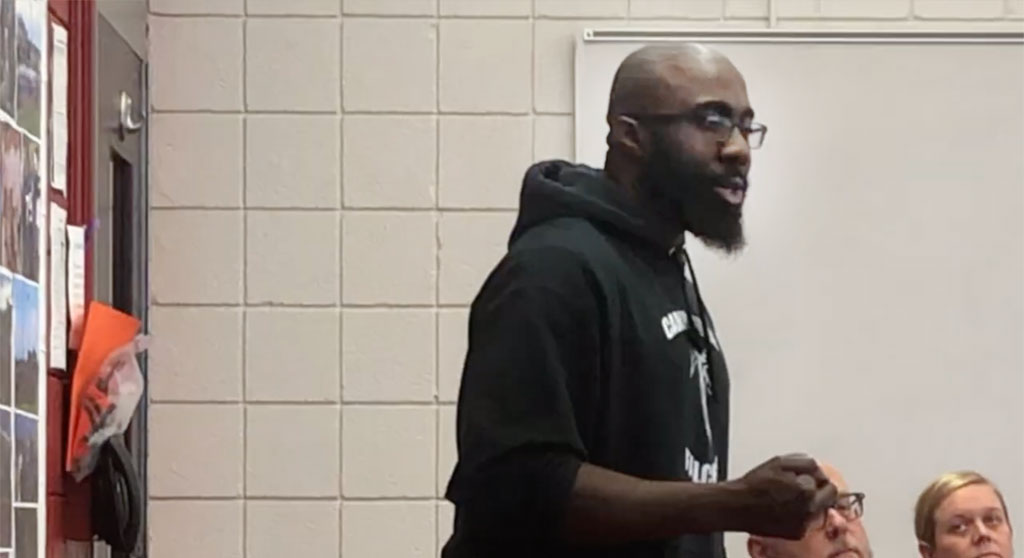 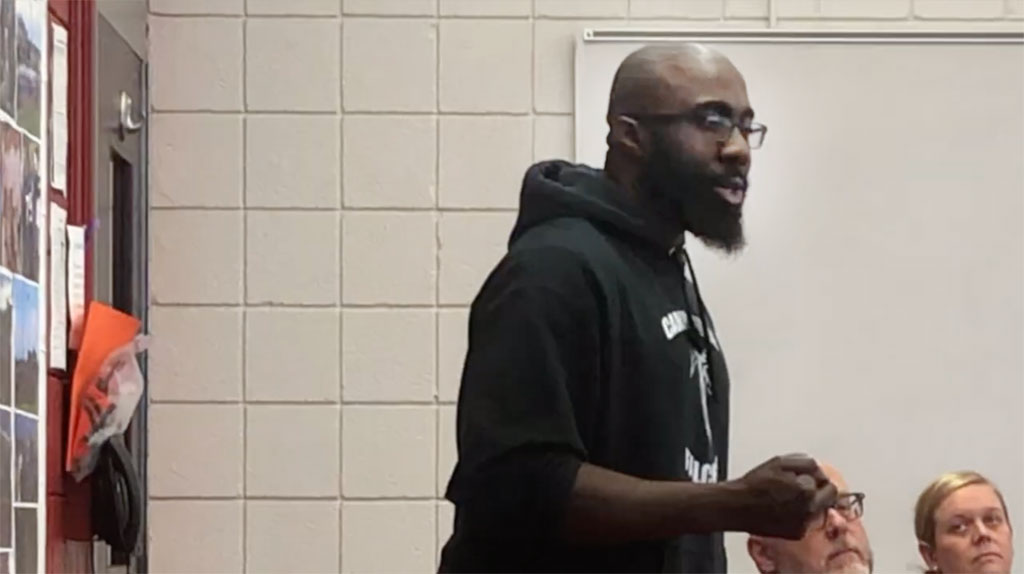 A forecast of Tuesday snow brought the cancellation of a School Committee meeting that would have dealt with a long-delayed report on a district furor: a Jan. 10 high school classroom discussion where the “N-word” was used.

While discussion in the past has focused on a School Committee member who used the term, the new report looks also at the teacher who led the event at which it happened.

The report, dated July 30 but with a cover letter dated Dec. 3, has been released as part of the committee’s agenda in a heavily redacted form that various school officials have suggested results from a district privacy policy. A section describing what took place during a classroom panel discussion in the U.S. History II Honors Class taught by Kevin Dua is fully redacted; the first six exhibits in the report are removed.

The four months between the arrival and release of the report, those officials said, were taken up by seeking permission for public release of the information and of related classroom videos, and possibly working with the videos to allow their release without showing certain participants.

The report notes that Dua, in the run-up to holding a discussion in his Cambridge Rindge and Latin School class titled “Reclaiming: [N-word] vs. Cracker: Educating Racial Context in/for Cambridge,” bypassed a step in the school’s “Teaching About Controversial Issues” policy that could have avoided the controversy.

The policy “provides that when a visitor from outside the classroom presents, they should be guided on standards of language usage that prevail in the classroom,” according to the report. “After being shown a copy of the policy, Mr. Dua advised that he does not believe that the project … is controversial but understands that ‘some may think it is, but I don’t.”

That finding came from an interview with Dua, according to the report.

The panel discussion addressed racial slurs, the Internet and filters that Cambridge Public Schools puts on its student Chromebooks and Web networks that make it difficult for students to “research certain words for historical context,” the report says. School Committee members Emily Dexter and Laurance Kimbrough were guests, along with superintendent Kenneth Salim and representatives of the district’s information technology department.

Dua – who is black – used the racial term several times in full.

Dexter – who is white – then made the point that students get a filtered version of reality in various ways. But in talking about where and how the N-word appears, in one instance she used the full term. A video from the event shows no immediate perceptible change in the mood of the room at or after Dexter’s use of the term. Within the frame of the phone filming the event, students seem unaffected, if not distracted by other things, and neither Salim nor Kimbrough seem to react.

After the event, the report shows that Dua sent participants a note of appreciation at 5:04 p.m.: “I had a few students shortly afterward express how appreciative they were with the shared insights from local leaders.”

Dexter responded at 5:33 p.m. with a seemingly unprompted acknowledgment of her error: “I feel bad if I caused harm to students or adult guests or you by pronouncing the N-word. Ignorant of me. Will know better going forward.” 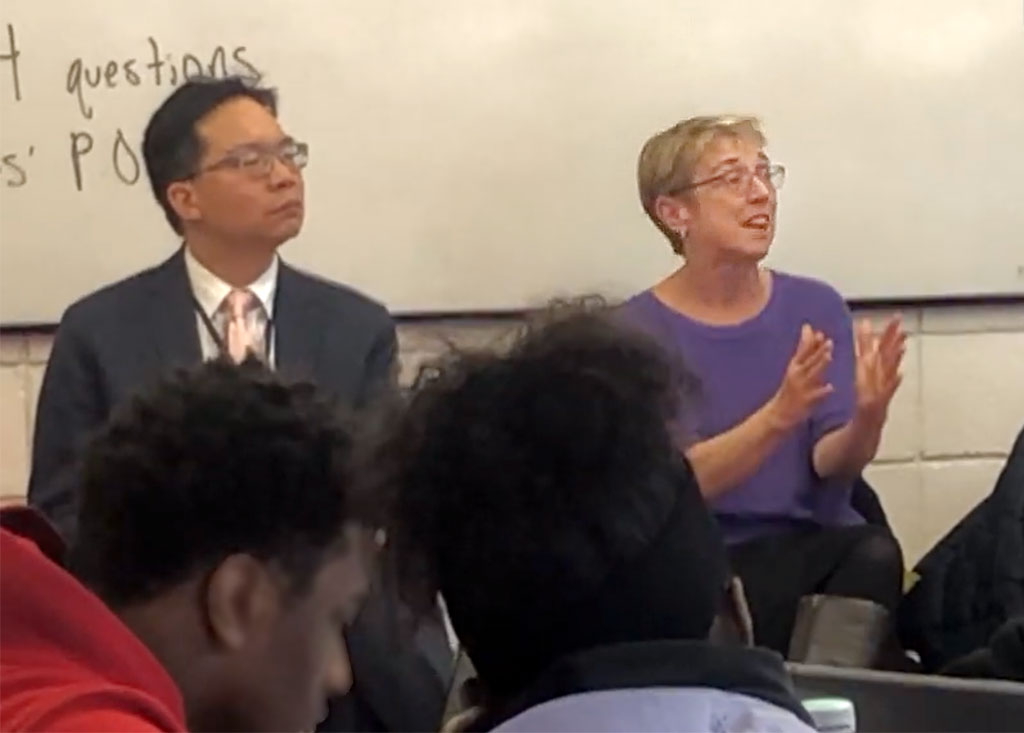 Superintendent Kenneth Salim and School Committee member Emily Dexter were guests Jan. 10, seen in the same student video. A student’s face has been purposely blurred in this image.

Dexter went back before Dua’s class Jan. 17 to discuss her previous visit. The visit went poorly, with Dexter taking an abstract, professorial approach rather than apologizing directly, at one point telling the students that, although she was “genuinely sorry,” it was possible that someone in her position would not be genuinely sorry – and if she were in their situation, “I probably would not believe somebody coming forward today and saying they were genuinely sorry.” The conceptual angle was more confusing and provocative than it was calming. “The way you’re going about it feels very disrespectful,” one student told her, amid seeming general discontent.

As the visit went on, Dexter apologized profusely and responded directly to student questions, she said. Dexter made more efforts to be in contact and express regret afterward, as shown in emails included in the report as exhibits.

The timing of the return visit was suggested by Dua as the best day based on his class schedule, Dexter said, and he also had some influence on the tenor of her talk with the students Jan. 17. “I … met with him for 80 minutes the day before to talk over how to talk to the students, during which time he indicated they might be skeptical about ‘another apology from a white person,’ which is one of the reasons I suggested to the students that they might not believe any apology I offered,” she said.

The School Committee approved an investigation Feb. 5 and returned to the topic April 2 to amend that to becoming an “objective fact-finding review” to be conducted by an attorney paid up to $9,500. In May, the firm Louison, Costello, Condon & Pfaff came forward to take on the job, which was to be completed by the end of the school year. Delay resulted from the need to talk with all 11 sources deemed necessary for fact-finding. (In the public version of the report, three of those names are redacted; “Kimbrough appeared for his scheduled interview but advised that he did not want to answer any questions,” the report says. A redacted clause follows.)

“I am glad the report is finally being released, although it’s unfortunate that so much material had to be redacted due to personnel and student confidentiality issues. I am hopeful that the recommendations will be useful to the School Committee and administration,” Dexter said Tuesday.

The report makes several suggestions to avoid similar issues in the future, such as including a summary of the subject matter to be addressed when approval is needed for outside panelists to come speak to a class. A student complaint form, wider availability of mediation and detailed policy about removing terms from student technology filters are all advised.

The most direct suggestion related to the Jan. 10 incident is “to include specific examples of what may be deemed controversial” as guidance to teachers. “Also, efforts should be made ensure that teachers address the expectations for the discussion prior to a presentation involving a controversial subject,” the report says.

“Prior to the panelists arriving at his classroom on Jan. 10, aside from the email inviting them to participate, Mr. Dua did not conduct any preparatory discussions or meetings,” the report says, citing Dua as the source for that finding. “No guidelines were given to the speakers on what they could or could not say.”

In response, a Cambridge Education Association statement said that the report failed to include the inactions of administrators, including that “that they did not notify educators of the relevant policies that the educator is held accountable to … nor was the fact that the administrators did not adhere to these policies themselves mentioned.”

The focus on Dua concerned the association, according to a statement released by president Dan Monahan. Had the committee meeting Tuesday not been canceled, Monahan planned to say that “while we appreciate the redactions the School Committee has made based on our feedback, it is our view that the redactions are still insufficient to protect confidential personnel information from a CEA member.”

“We reserve our right to file a grievance and an unfair labor practice charge based on this report. Specifically, The CEA is concerned that this report is not a programmatic review, but a review of the actions and work of one educator,” the statement says.

“This report and the process leading up to it reek of white supremacy culture and institutional racism,” the statement says. It “is an investigation of a black educator’s actions done by a white lawyer.”

Dua and district officials were also invited to comment on the report before it is discussed at an upcoming committee meeting.

This post was updated with comments from Emily Dexter and the Cambridge Education Association.