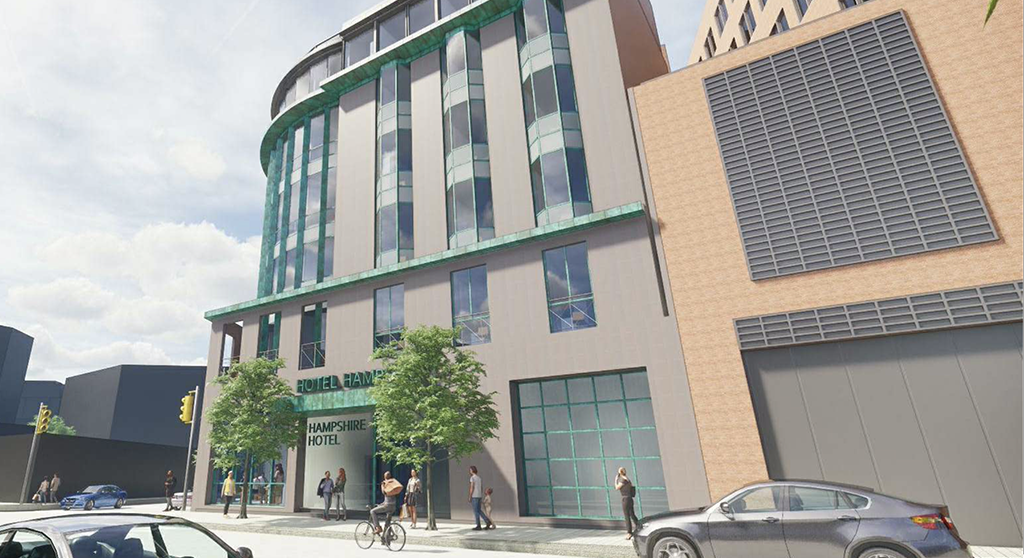 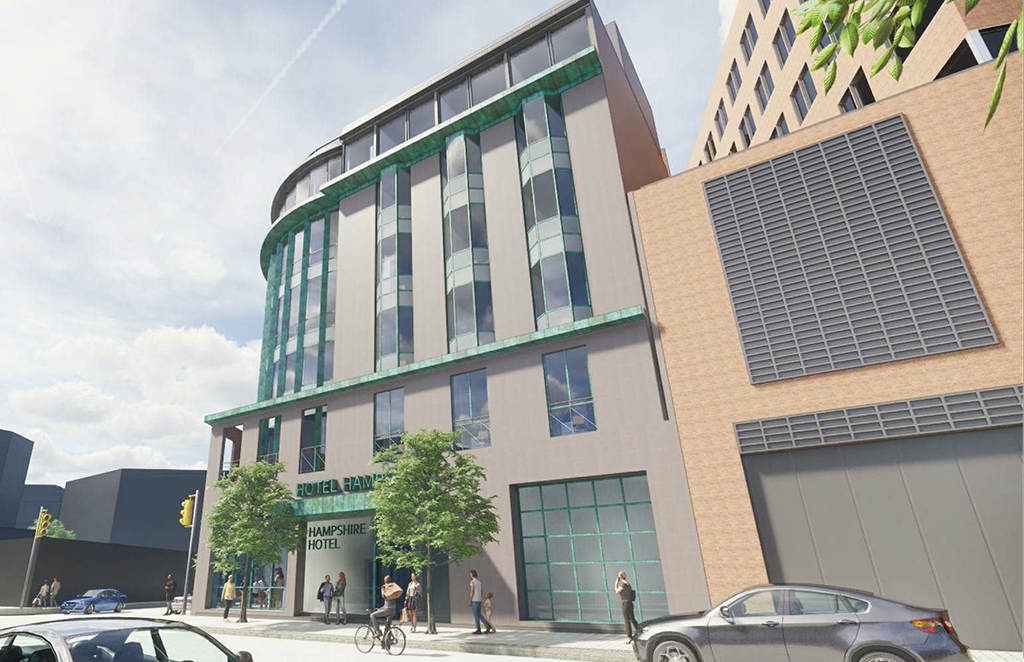 The Planning Board is set to hear a proposal Tuesday for a 68-room, six-story independent hotel for Kendall Square. (Image: Boyes-Watson Architects)

City Council, 5:30 p.m. Monday. The city is asking for $1.2 million to expand tree planting and to take other steps called for in Urban Forestry Master Plan recommendations. That will come as a relief to more people than the legal opinion about strengthening the Welcoming Community Ordinance – which makes clear that while Cambridge wants to limit its role in immigration enforcement, the federal government has the power to force action. An order has arrived to look at changing the name of the Agassiz neighborhood to one that doesn’t seem to celebrate a racist, and councillors want to see if the city can expand Head Start program hours and scholarships to improve access to early childhood education.

City Council/School Committee roundtable, 5:30 p.m. Tuesday. City and school officials meet to begin discussions on a preliminary School Department budget for the 2021 fiscal year. The district budget was a point of contention for city councillors last year; two cited the persistence of an academic achievement gap affecting mainly students of color (of those, E. Denise Simmons remains on the council) and the failure of the district to incorporate the climate change crisis into curriculum (likewise councillor Quinton Zondervan).

Planning Board, 6:30 p.m. Tuesday. After securing zoning, developers are coming to the board seeking to a break in parking requirements – 34 spaces would be required, and a sophisticated auto-stacker system could accommodate 16 cars – to build a 68-room, six-story independent hotel, replacing an empty lot, the former Kendall Hair Co. and former Emma’s Pizza at 34-40 Hampshire St., Kendall Square. (Hedging bets, the design by Boyes-Watson Architects identifies the project as the Hotel Hampshire and Hampshire Hotel.) The agenda also holds business for cannabis sellers in Central Square and on New Street, in Neighborhood 9 near Fresh Pond.

License Commission, 3 p.m. Wednesday. There’s a disciplinary hearing for Harvard Square’s Hong Kong Restaurant, where a worker and customer clashed in a December incident; a beer and wine license hearing for ramen joint Menya Jiro to open at 57 JFK St., also in the square; and a switchover of an alcohol license as Senses arrives in Kendall Square to replace Café ArtScience. (Update on Feb. 12, 2020: The Hong Kong and Café ArtScience matters were delayed to future meetings.)

Ordinance Committee, 5:30 to 7:30 p.m. Wednesday. This committee run by city councillors Dennis Carlone and Marc McGovern will look at raising the fee big developers pay to help make up for residents displacement caused by hiring for their office or lab space; what’s on the table is a hike of the rate to $19.10 per square foot from the current $17.10, with $1 annual increases for four years and inflationary increases. Councillors worry that a year of automatic increase was skipped while a report on those increases was being written.

An executive director at The Foundry building

Cambridge Redevelopment Authority, 5:30 p.m. Wednesday. A hearing of the annual report is on the agenda, along with a Foundry community building update (it’s time to hire an executive director for the site, which is expected to open next year) and appropriation of $60,000 for bus stop construction at 500 Main St., Kendall Square.

Tobin Montessori and Vassal Lane Schools community meeting, 6:30 to 8:30 p.m. Wednesday. The fifth community meeting to discuss the $250 million, four-year school and park project will see city officials and architects Perkins-Eastman respond to comments received since the Jan. 16 community meeting and present a preferred – though not necessarily final – building and open space option.

The meeting is set for the third-floor chapel at Spaulding Hospital, 1575 Cambridge St., Mid-Cambridge. Ask at the front desk for directions.

Living with Coyotes, 6:30 p.m. Thursday. John Maguranis of Project Coyote is brought in by the Cambridge Animal Commission for a presentation on the encroaching wildlife that’s been called one of the most “misunderstood and remarkable animals in North America.” Topics include such things as natural behavior, diet and habits, origin and history, myths and facts, and pet and human safety.

The meeting is set for the Water Department facility at 250 Fresh Pond Parkway, in West Cambridge at Fresh Pond.