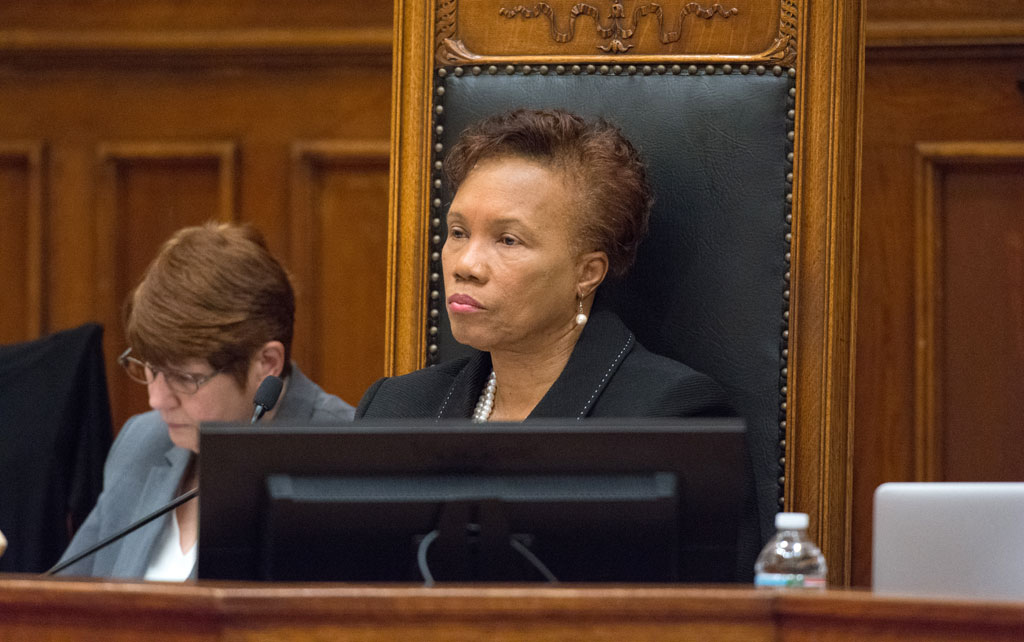 A $678.4 million municipal budget for the 2020 fiscal year was adopted Monday on a 7-2 vote, with a third councillor voting in favor but under “protest” – the sticking point for all three being the $202 million school budget.

Their intentions had been signaled at a Finance Committee hearing May 8, at which they talked about frustration at the persistence of an academic achievement gap affecting mainly students of color – cited by Craig Kelley and E. Denise Simmons – and also the failure of the school district to incorporate the climate change crisis into curriculum, as cited by councillor Quinton Zondervan.

“I can’t support a budget that’s paying for the oppression of a class of people,” Simmons said, before offering support of the full budget.

All three gave impassioned arguments about the failings of the district over decades, through various superintendents and multiple School Committee members, to raise the academic achievements of students of color.

“It’s not just one or two, it’s not just dozens, it’s not just scores – it is hundreds of kids that aren’t meeting proficient standards,” Kelley said, ridiculing the idea that it would “plug the gap … to put half a person as a math interventionist into a middle school.”

“It is broken. It’s just broken,” Kelley said. “We should all just wake up in the morning ashamed. And I do.”

After Mayor Marc McGovern chided Kelley for announcing his vote against an overall “pretty spectacular” budget that includes a lot of things aside from school funding, Simmons’ comments got personal – saying McGovern’s big-picture approach took away her ability to convey outrage at the academic disparities and taking swipes at the School Committee, which is led by whomever the council elects as mayor during its two-year term.

“When you adopt [an overall] budget, they go, ‘Whew, dodged that bullet,’” Simmons said of School Committee members. “I am in no way satisfied with what the school department has done, and I hope they hear that loud and clear so that whoever chairs the School Committee in the next term will take that back with them and say, ‘You’re going to have trouble with the City Council if you don’t do better, because [members] will continue to vote against your budget until we see that gap close.”

McGovern repeated a point he made May 8, when Simmons first raised these issues: She has been mayor and leader of the School Committee herself, meaning she passed four budgets that also failed to close the achievement gap.

And this budget does something new, McGovern said.

“Unlike past budgets, this budget is putting about 58 of the 59 positions we’re adding not only directly into classrooms, but directly into classrooms in the schools that have the highest percentage of kids who need the support,” McGovern said. “That has never been done. We’re not going to see that gap close dramatically in a year. But I have been part of 14 School Committee budgets and I have never seen a budget that has targeted or directed the resources in the way that this budget does.”

City Manager Louis A. DePasquale gave a strong response as well, noting that he’d overseen three years of district budgets adding some 150 positions, to the tune of some $30 million. “I take my bottom line authority very seriously,” he said.

“Then it’s not about money. There must be desire, and that’s worse,” Simmons shot back. “There’s a problem deeper than this, and we might have to have one those come-to-Jesus conversations in here to really say what’s happening … being brave and courageous to point it out, call it what it is, and then fix it. Because if we’re not willing to be brave and courageous, we’re going to continue to have hundreds of children sentenced to a life of despair and travesty.”

Though no School Committee member was present Monday, former co-chair of its finance subcommittee Emily Dexter has said that because of a projected increase in student population – which would have to addressed in any budget – what seems like a 5.6 percent increase in the district budget is really a 2.6 percent increase per pupil. The non-school portion of the city budget is rising 7.5 percent, she said.

Dexter was not part of the presentation of the district budget May 8. When asked why, she said she had been removed from her position by School Committee vice chair Kathleen Kelly, because she did not vote for the district budget in April. (The vote was 5-2, with Dexter joined in opposition by Laurance Kimbrough.) “Presumably, she did not want me speaking at the budget hearing, which I find disturbing,” Dexter said, pointing to it as an example of how some officials “respond to people voting their conscience.”

Kathleen Kelly did not respond to a May 10 email seeking comment about her dismissal of Dexter.

During the full budget hearing Monday, councillor Craig Kelley was also critical of the city’s failure innovate on transportation, and Simmons questioned if the city’s anti-bias training was rigorous enough. Councillors also had extensive questions about funding and management at the Multicultural Arts Center in East Cambridge and for the Office of Tourism, but not to the degree they would vote against the budget, they said.

The operating and capital budgets approved for the 2020 fiscal year represents an increase of $36.7 million, or 5.7 percent over the current fiscal year’s adjusted budget.