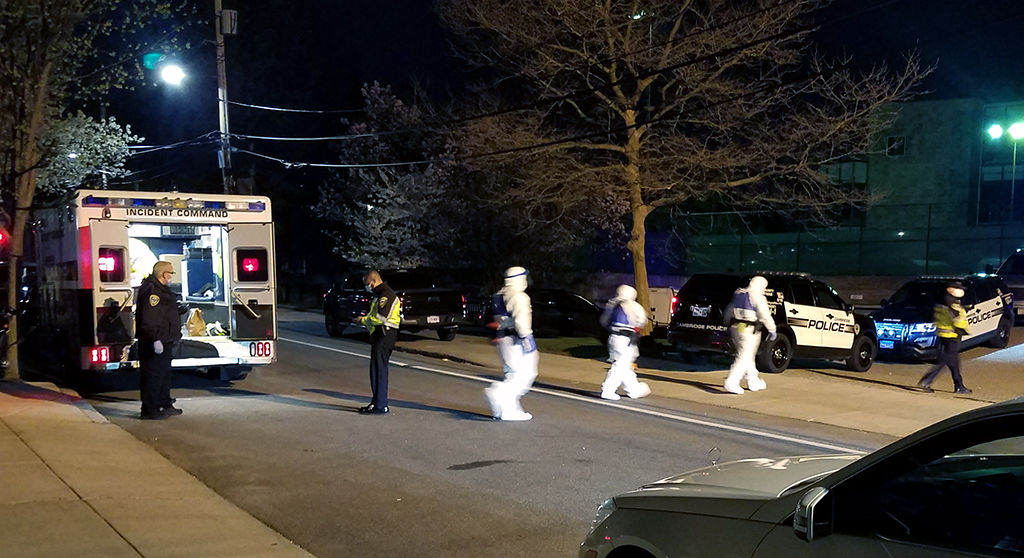 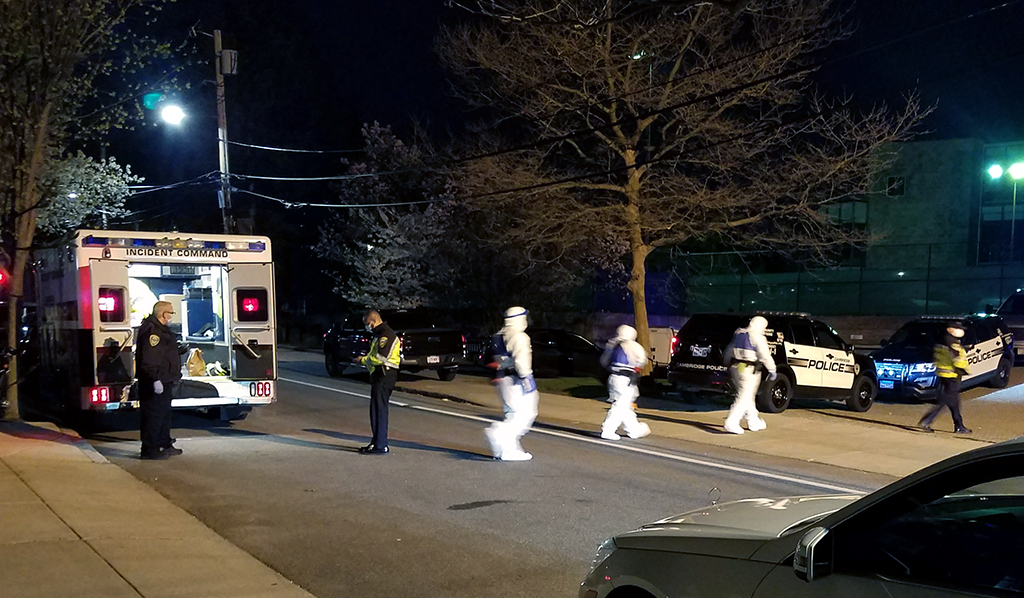 People in hazmat suits cross Friday to a temporary homeless shelter set up by the city at the War Memorial Recreation Center in Mid-Cambridge.

A temporary homeless shelter opened Saturday night at the War Memorial Recreation Center in Mid-Cambridge – after two weeks before city councillors and a day late after a last-minute change requiring guests to test negative for Covid-19. Results from tests at the city’s warming center for the homeless Thursday did not arrive until Saturday afternoon. 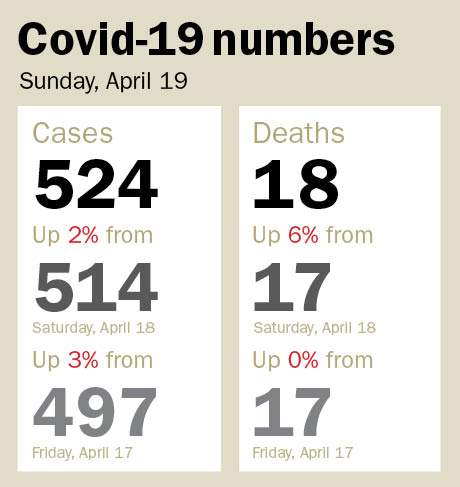 Capping two days of confusion in presenting shelter turnout to the public, city spokesman Jeremy Warnick declined Saturday to say how many people were tested and how many, if any, tested positive. He said it was in line with the Cambridge Public Health Department’s policy of not identifying nursing homes or assisted living centers with positive cases.

Nelson, who was at the warming center but who did not give his last name, said an ambulance took another guest away Saturday evening and that guest’s wife, who was also at the center, said her husband had tested positive and she, negative. “I’m worried,” Nelson said, noting that he and others in the warming center had spent hours with the infected man; the center remained open all day Saturday and guests were discouraged from leaving. When people did leave, he said, they often bought liquor and drank with other homeless people on the street, then came back to the warming center.

“They use drugs; they share their drinks,” he said. In the warming center, some guests and staff members were coughing, Nelson said, and “the city doesn’t understand” the danger of housing people together. Fifty-five homeless people have signed a petition asking the city to use hotel rooms or vacant apartments for the homeless during the pandemic, he said. “Our lives matter,” the petition says, adding that it’s “impossible to practice proper hygiene and social distancing” while living on the street or in a shelter.

Nelson said he finally got his test result – negative – at around 7:50 p.m. When he arrived at the War Memorial shelter at almost 9 p.m. after walking from the warming center in Central Square, he was the first one there, he said. The shelter will remain open during the day, unlike many facilities that house the homeless.

Warnick said anyone who tested positive would be taken to one of the regional hotels set aside for homeless people who are infected and need to isolate themselves. Those who test negative can stay in the War Memorial shelter in the field house after having their temperature checked and answering questions about their health. Warnick said some people had refused to be tested; they won’t be allowed into the shelter.

Healthcare for the Homeless will hold a medical clinic for shelter guests five times a week, Warnick said. The warming center will now close, he said.

Warming center guests were tested Thursday; people at a shelter at 240 Albany St. are to be tested next week, Warnick said. He said some who test negative may choose to stay at the Albany Street shelter instead of going to the War Memorial. The Albany St. facility is a “wet””shelter that allows guests to bring and use alcohol and drugs, while the War Memorial shelter forbids that.

City Councillor Quinton Zondervan, who had advocated for the tests, said he was disturbed that warming center guests spent two nights together and left the center during the day while people were awaiting test results. “We have no answer to the problem of reinfection,” where a person who was unknowingly infected could spread the virus to others, or someone who wasn’t could have contact with an infected person outside, Zondervan said. He said he didn’t understand why the city didn’t move people awaiting results to the quarantine area in the War Memorial, where people have separate spaces.

Warnick said that area was for people with symptoms or contact with an infected person and awaiting test results, and the warming center guests who were tested did not have symptoms or previous contact. Any homeless person with signs of illness would have been tested earlier than Thursday, he said, urging verification by Susan Feinberg, spokeswoman for the city health department. She did not respond to an email.

Zondervan said he was told that 40 people were tested. The quarantine area has space for only 20 people. Warnick said that area was “operational, and several individuals who tested positive while in quarantine were transported to the regional isolation centers.”

On Friday evening, when the shelter was scheduled to open,  no one except police were at the entrance to the fieldhouse .The city did not say whether anyone was expected and did not explain the delay until Saturday afternoon.

City officials surprised neighborhood residents and the School Committee when they announced on March 30 that the city would use the War Memorial athletic facility to house homeless adults and prevent the spread of the Covid-19 coronavirus. People without a home have no place to isolate themselves if they test positive for the virus, and gathering places for the homeless don’t offer enough room for social distancing, advocates for the homeless said.

The War Memorial, which houses Cambridge Rindge and Latin athletic programs and community recreation, had the advantage of allowing quarantine, isolation and shelter all in the same building, city officials said. The original plan called for a 20-bed area for people with symptoms of coronavirus who were awaiting test results, a place for 25 to 50 people who had tested positive and needed to isolate with access to medical help, and a shelter for 50 to 100 healthy people in the field house.

Several councillors questioned the plans, especially housing a large number of people in undivided shelter space. Councillors Zondervan and Jivan Sobrinho-Wheeler said the city should seek separate rooms in Harvard and MIT dorms or in hotels to prevent infection from spreading; vice mayor Alanna Mallon called for partitions between the cots in the field house. City officials rejected the ideas.

Still, the plans had changed twice by Wednesday. First, city officials said people who had tested positive would not stay together in an isolation unit in the building; instead they would be sent to the Freepoint Hotel on Alewife Brook Parkway. Then, on Wednesday, city spokesman Jeremy Warnick confirmed that the deal between the state and the hotel had fallen through. Instead, homeless adults with the virus would go to a hotel in Lexington – the Aloft, city councillors were told.

On Thursday, the plan changed again, this time answering some objections by councillors. The city said it would test homeless people for Covid-19 before admitting them to the shelter, and only those testing negative could enter.

Some show lack of interest

When the shelter opened Friday evening, the only homeless person in the vicinity was a man in a sleeping bag next to the CRLS arts building. When he woke up, he said he was not waiting to go into the shelter and had slept outside the arts building for several years. He was healthy and didn’t want a test, he said. That man was in the same place Saturday evening.

Including not being a “wet” shelter for homeless who may be drinking or using drugs, the War Memorial shelter – costing at least $500,000 contributed by Harvard and the Massachusetts Institute of Technology – was not for families and might be uncomfortable for homeless youth, city officials have said over the past weeks.

A Mid-Cambridge resident reported seeing an ambulance, fire engine and police cruisers pull up to the site Friday around 8:15 p.m., with three people in hazmat suits emerged from the ambulance, crossing the street and walking up the ramp to the gymnasium. But an officer – part of the 24-hour security detail that’s been at the scene – said they had “no idea what is going on,” the resident reported.