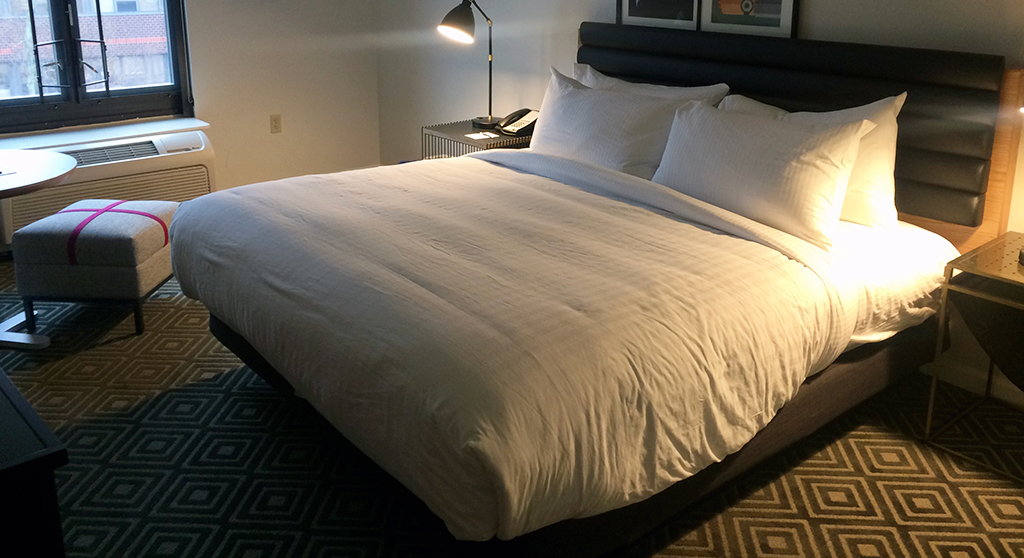 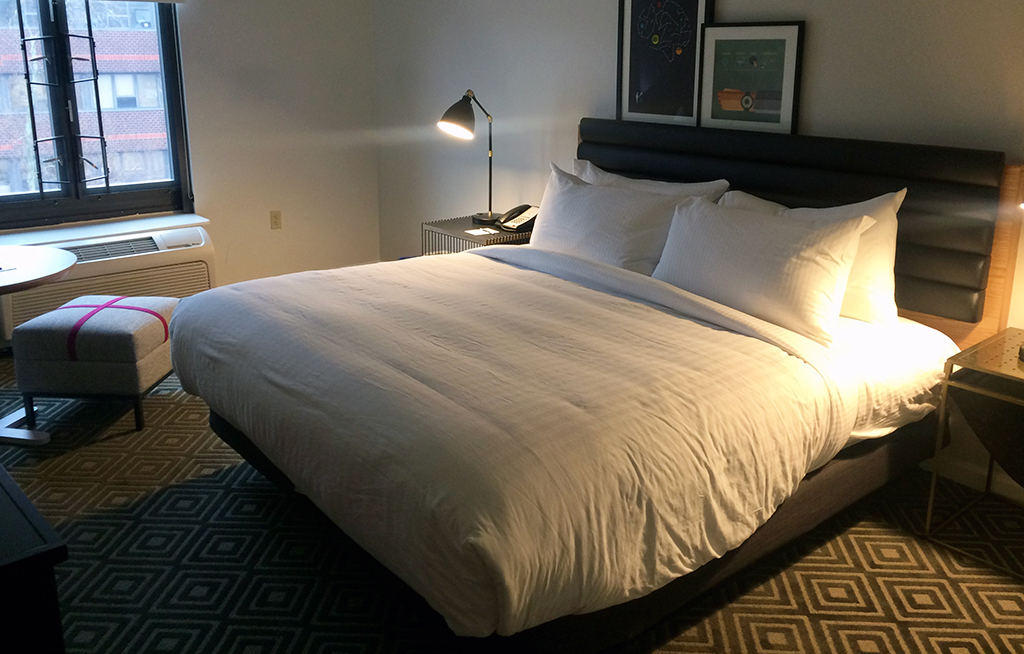 A room at the Freepoint Hotel on Alewife Brook Parkway, which will be used to host homeless people who are infected with coronavirus. (Photo: Marc Levy)

The city opened a 20-bed unit at the War Memorial Recreation Center on Tuesday to house homeless people who are waiting for results of a Covid-19 test and need to quarantine themselves – but no one showed up on the first day. A more controversial shelter in the building gymnasium is scheduled to open Friday.

The temporary shelter is the city’s answer to warnings that homeless people could spread the virus widely since they have no space to self-quarantine and must spend the day in close proximity. Last month, First Church shelter director Jim Stewart wrote to City Manager Louis A. DePasquale that unless the city came up with a solution “the health and well being of all members of the community will be seriously compromised.” Homeless people with the virus could infect police and other first responders, who could spread the infection to the general public.

The facility houses athletic programs of the currently closed Cambridge Rindge and Latin School campus and community recreational programs, and the path to converting it to a homeless shelter has been rocky. The School Committee, neighborhood residents and councillors were taken by surprise when city officials announced the decision March 30. 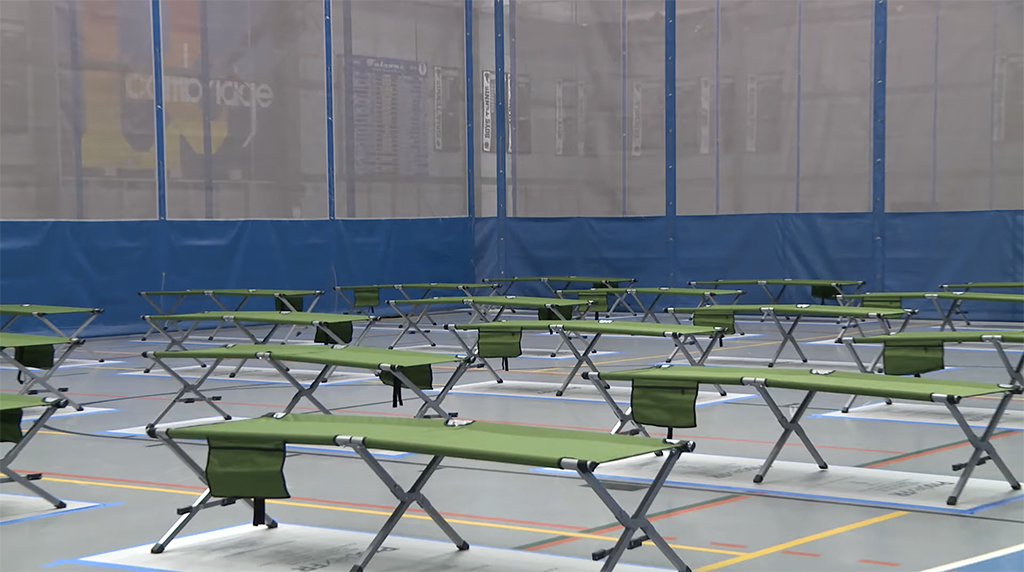 Homeless people who are not known to be infected with coronavirus are invited to a temporary shelter at the War Memorial Recreation Center in Mid-Cambridge.

Originally the city planned to include the 20-bed quarantine unit; a 25- to 50-bed area for people who have tested positive and are in isolation; and the shelter for 50 to 100 people. Those plans changed when the state came up with hotel rooms at the Freepoint Hotel on Alewife Brook Parkway for homeless people who are infected. The unit that was to hold infected people in isolation will now be an “overflow” area if the hotel runs out of space.

City officials have said the city’s largest shelter at 240 Albany St. is too crowded, and a warming center in the basement of the Senior Center in Central Square is scheduled to close this week, making the shelter in the gym necessary. “We need to get people inside as soon as possible,” said councillor Marc McGovern, a social worker with ties to the homeless community.

On Monday, some councillors continued to voice reservations about the project, and two condemned a city video showing construction work at the shelter, though for different reasons. Vice mayor Alanna Mallon said the video showed beds lined up in the gymnasium with no partitions, risking the spread of infection from people without symptoms.

“You know, when I looked at that video, and I saw that picture, it was very shocking to me to see just cots in a gym. I think we need to be delivering human services in a humane way. And I really want to stress tonight that I think there needs to be physical barriers and partitions both for the medical aspect of it and as well as the human aspects,” she said.

Councillor Patty Nolan voiced a different complaint about the city video, embedded here: It shows city officials and construction workers not practicing social distancing, she said. “I really hope that someone goes back and re-does some of that video footage, because it is contrary to the best practices we’ve been talking about in terms of many of our city leaders not wearing masks and protective equipment, a couple of construction workers not even having masks while inside – and they’re within 2 feet of each other,“ she said.

In an interview Tuesday, Nolan said: “I was disappointed if not stunned to see within the first minutes there were instances of people without masks and right next to each other.” Two of those people were DePasquale and Chief Public Health Officer Claude Jacob, she said.

Nolan was so upset that she asked DePasquale to edit out the parts that showed the violations of Covid-19 precautions that city officials have been promoting for weeks, she said. The video had not been changed as of Tuesday.

Councillors Quinton Zondervan and Jivan Sobrinho-Wheeler pressed the city to look for hotel and dormitory rooms for homeless adults. “We all agree that the War Memorial is better than nothing,” Sobrinho-Wheeler said. But the city has empty hotels and dorms, and putting people together in a group shelter could be risky if a person without symptoms is contagious, he said.

Several people who said they were homeless tried to speak in the council’s public comment session on Zoom before the meeting, but couldn’t be heard. Others succeeded. “How do we do social distancing when we have no place to go?” one woman asked. Another woman said she and her boyfriend were worried about having a safe place “for our baby when it’s born.” She asked for information about hotels and dorm rooms that would be open to the homeless “so families could … stay together.”

A man said the War Memorial “is not a great solution” but perhaps “the best temporary solution.” He also suggested asking hotels to donate rooms, saying, “Warehousing people in a gymnasium doesn’t seem like it would work; it seems like it would put people at higher risk.”

One thread running through the discussion was lack of testing for the virus. The second round of a surveillance program at the city’s seven nursing homes and assisted living facilities is on hold while the Broad Institute, which is doing the testing, waits for more test kits, expected Thursday or Friday. The program is unlike any other in the state because all residents and workers at the sites are being tested regardless of whether they have symptoms.

The first results showed how little public health officials know about the extent of infections. A total of 203 residents and workers tested positive; previously the Cambridge Public Health Department knew of only 48. The department also announced that six residents and workers have died of Covid-19; it wasn’t known whether any had been tested in the surveillance program.

When Zondervan asked whether homeless people could be tested before staying in the shelter, police commissioner Branville G. Bard Jr. said everyone will go through a temperature check and answer questions about his or her health. The intent “is to screen everyone … but not necessarily to test everyone,” he said.

“Are there no concerns then about transmission from presymptomatic individuals?” Zondervan asked. “I think that’s a concern always,” Bard said. Shelter guests will be given a mask and gloves, he said.

DePasquale told councillors that the Cambridge Health Alliance has enough supplies to test a total about 120 or 130 people a day at its mobile testing site next to Somerville Hospital and in its hospitals and clinics. When the Alliance opened the mobile site March 18, officials said it could perform 80 tests a day; CHA has postponed plans for two additional sites because of lack of supplies.

Zondervan had filed a policy order seeking to have the War Memorial “repurposed” as a testing site and quarantine area for the homeless. He withdrew it for reconsideration at the council’s next meeting after a majority of councillors indicated that they wouldn’t vote for it.