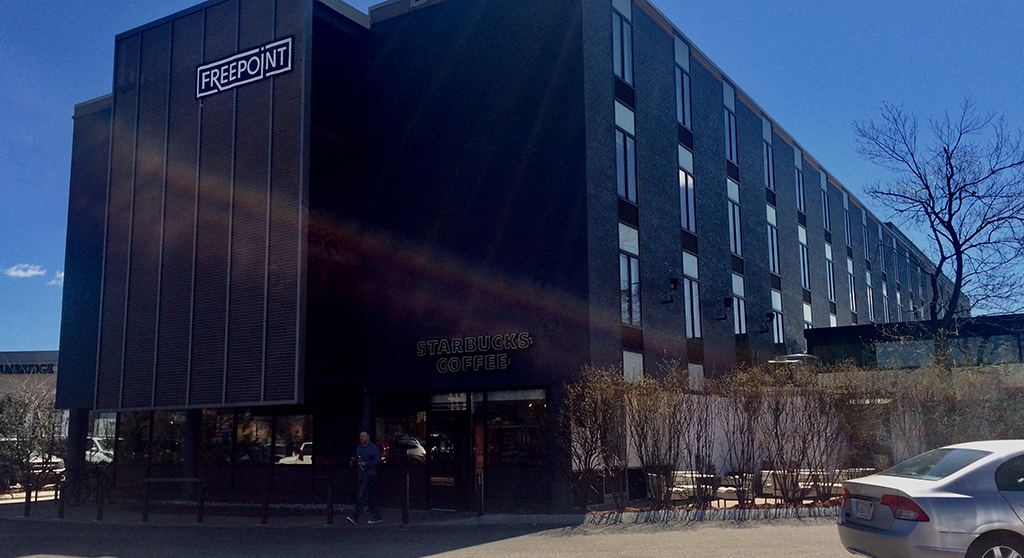 The Freepoint Hotel in Alewife opened in the spring of 2017. (Photo: Marc Levy)

A deal to house homeless adults infected with coronavirus at the Freepoint Hotel in Cambridge has fallen through. Instead, they will be taken to “a regional hotel” outside the city, said Jeremy Warnick, a spokesman for the city, on Wednesday.

Warnick confirmed the collapse of the agreement between the hotel and the state after Cambridge Day asked for response to a report that the Freepoint was not going to take homeless people who had tested positive for Covid-19, as had been announced by the city and state on April 10. City Manager Louis A. DePasquale had told the City Council on Monday that the hotel would start accepting them on Thursday or Friday.

Acting on a tip, a reporter called the Freepoint Wednesday and asked if that was true. A receptionist said: “I don’t think so.” In another sign that the plan had changed, the hotel was accepting reservations into next week.

State spokespersons and a hotel manager didn’t respond to emails and phone messages. Warnick said the state would have to answer questions about why the agreement fell through.

It was the second change in the city’s plans to house homeless adults at the War Memorial, the athletic center for Cambridge Rindge and Latin School and the community, to prevent the spread of the coronavirus. Originally the complex was to include three areas: a 20-bed unit for homeless people who were awaiting test results and needed to be quarantined; an area for 25 to 50 people who were infected and had to remain in isolation; and a shelter for 50 to 100 homeless adults who were not sick.

The quarantine unit opened Tuesday; as of Wednesday no one was staying there, Warnick said. The shelter, in the field house, is expected to open Friday.

After the state reached an agreement with the Freepoint, city officials said they would keep the isolation unit as an “overflow” area in case the hotel ran out of space. That is still the plan, Warnick said Wednesday.

Homeless people who are diagnosed with Covid-19 will be taken to a hotel in Lexington to spend their isolation, Warnick said. He did not name the hotel, though the City Council was told it was the Aloft, a Marriott branded site near the Concord line. Later, homeless people with the virus will go to a hotel in the region, he said, also unnamed.