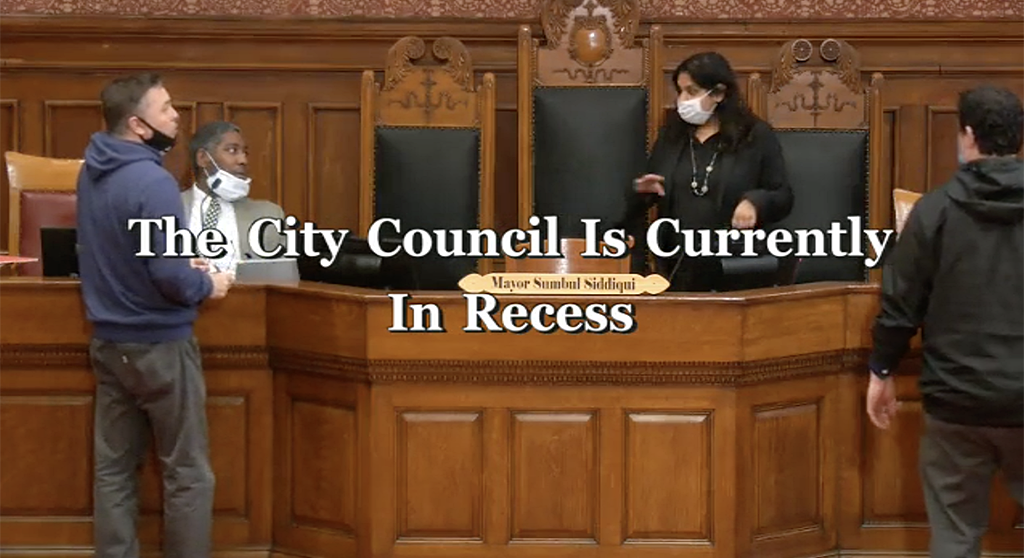 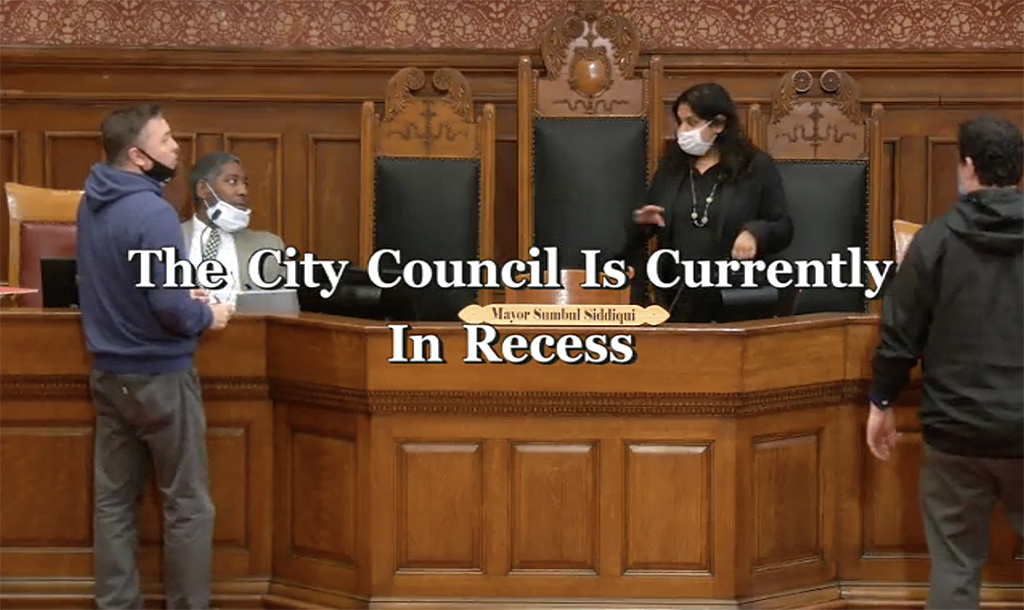 Officials talk over next steps after the City Council meeting Monday got Zoombombed, seen in a screen capture from 22-CityView.

The City Council took a 16-minute recess Monday after its meeting’s public comment period got Zoombombed. That is, the official use of the Zoom video conferencing platform was joined by people who jeered, yelled insults and, at around a half-hour in, put up an image of men engaged in oral sex alongside the faces of people waiting to talk about a homeless shelter and safe behavior during a coronavirus pandemic.

As the image appeared, video technicians for the 22-CityView broadcast service cut away to Sullivan Chamber, where city clerk Anthony Wilson could be seen leaning suddenly away from his laptop in surprise.

“I’m going to call a recess, because there’s some inappropriate visuals coming through that we need to take care of,” Mayor Sumbul Siddiqui could be heard saying from her office in City Hall.

A recess followed in which Siddiqui was seen onscreen coming to the chamber’s dais for discussion – unheard by people watching online – with Wilson, an audiovisual technician and councillor Marc McGovern, who was only at City Hall because the evening’s technology wasn’t going smoothly even without the inadvertent X-rated broadcast.

Since coronavirus made meeting in person biologically and politically unhealthy, most councillors have attended by voice only, while public comment has been handled via the popular Zoom software, which lets speakers’ faces be seen. On Monday, councillors were in the meeting via Zoom, and there was an order on the agenda to use the service to get the council’s committees back to work too.

But there were frequent problems Monday in which people couldn’t be heard or hear what was happening, continuing off and on throughout the night’s 5.5-hour meeting – some likely due to a learning curve on use of the mute button either by Wilson, as administrator, or by participants at home trying to talk. McGovern sprinted to City Hall to sit at his desk because he couldn’t make himself heard long enough for Wilson to know he was attending remotely.

On the other hand, Monday also saw the unveiling of live transcripts, putting the meeting’s spoken words on a separate screen where the action could be followed by the hearing impaired – a step the city has struggled to take since announcing closed captioning would be part of a flawed audiovisual upgrade in the summer of 2014. Wilson found a way to make full stenographic transcripts available starting in February, but they trailed meetings by weeks as clerks became familiar with the process.

“We’re going to get Zoombombed”

Zoombombing has been a plague of the newly virtual world introduced by the Covid-19 pandemic, but a widely discussed one, with the technologically adept learning ways to prevent it and the company issuing software patches and changes in protocols to help prevent it. Resident Saul Tannenbaum, eyeing the Zoom address being used by the city, called it at 5:32 p.m. just as the meeting got started: “We’re going to get Zoombombed, aren’t we?” And later offered advice online on avoiding the problem – unlikely to have been seen by city staff.

Councillor Patty Nolan was disappointed by the technological stumble, saying, “We’ve had four weeks to work on this.” And others were left shaking their heads online: “Our grandparents can make Zoom work, but somehow the City of Cambridge can’t?” asked a Twitter user identified as Etienne Martone.

“We will move forward and go from here. There may be issues that come up,” Siddiqui said, returning to expressing regret more than four hours later as the meeting wrapped up. “We will work diligently to make sure that never happens again. Because none of us want to see that or hear that.”