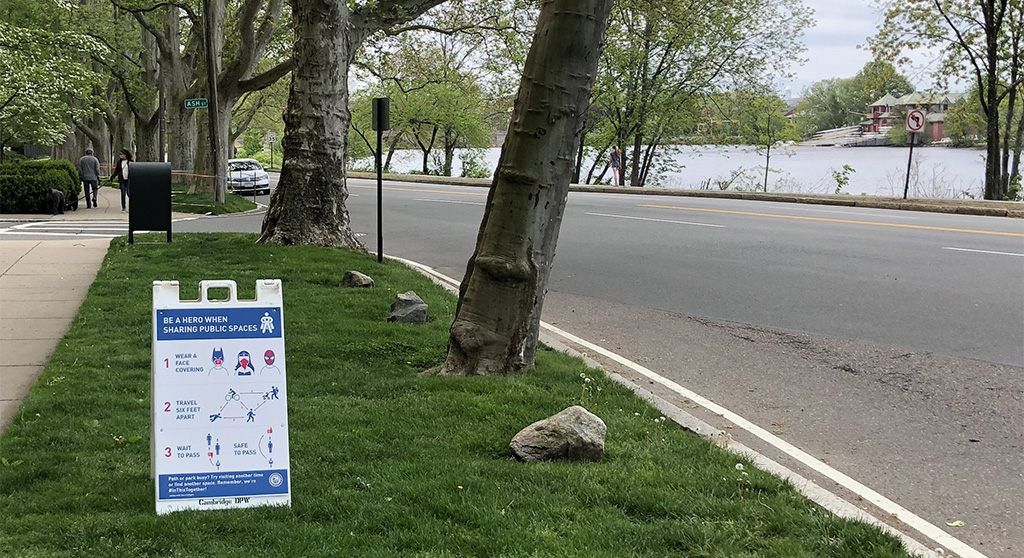 You’d think Memorial Drive (the area around Harvard Square, called “Riverbend Park,” when closed to car traffic) would have been packed Sunday from the combination of a holiday weekend, pent-up coronavirus demand and the sheer allure of the road. Anyone who’s traveled it knows Memorial Drive is sheer sex.

But photos and video seen on social media, including from city councillors, showed that was not the case. As of 6 p.m., police had “nothing of significance” to report.

Here’s a look from councillor Patty Nolan via Twitter:

And from vice mayor Alanna Mallon:

Councillors started asking in March for the City Manager’s Office to look at closing some neighborhood streets to drive-through traffic and using Memorial Drive for exercise, but City Manager Louis A. DePasquale resisted, even delaying the opening of Riverbend Park past when it usually opens for the year and finally allowing only an extremely limited two-Sunday test to prove it’s safe. (The second test is next weekend.) Police commissioner Branville G. Bard Jr. told councillors there would be a heavy police presence for the tests, with his department “in constant contact with [the state] and the state police.”

Instead, it was just a sunny but brisk day, with glowing green grass, wind cutting across the Charles, and masked runners, walkers and bicyclists spread safely across Memorial Drive’s sidewalks and traffic lanes.

But just as reasonable was the fear that this approach would sabotage a test of Riverbend Park by turning it into a two-Sunday event instead of just a feature of Cambridge life, little different from Cambridge Common or John F. Kennedy Memorial Park, the green space that lies between Harvard and Memorial Drive. Neither have been overcrowded during the coronavirus shutdown.

The city has a panel of experts that sagaciously if not courageously made the city trail so many others, though the city manager has similarly been his usual laggardly self at providing any of the reports from the panel asked by the council; only the mayor, who attends, really knows firsthand if the experts truly advised as the city manager says. Anyone can get it wrong once or twice, but for a city manager who has an obstinately unexplained refusal to consider a widely desired feasibility study of municipal broadband (for far, far longer than he resisted opening roads) this looks bad: He had a panel of experts advise a municipal broadband feasibility study (in September 2016) and has ignored it. He says he had a panel of experts advise against opening roads for exercise, and he followed it. The City Manager’s Office has convened both sets of experts. Similarly, DePasquale has been talking frequently of being in constant contact with other metro mayors, but choosing when Cambridge goes its own, idiosyncratic way.

It’s hard to know what’s really going on here in a city run like Cambridge. But then, it’s hard to argue the evidence of a day with “nothing of significance” going on except safe recreation under a shining sun.