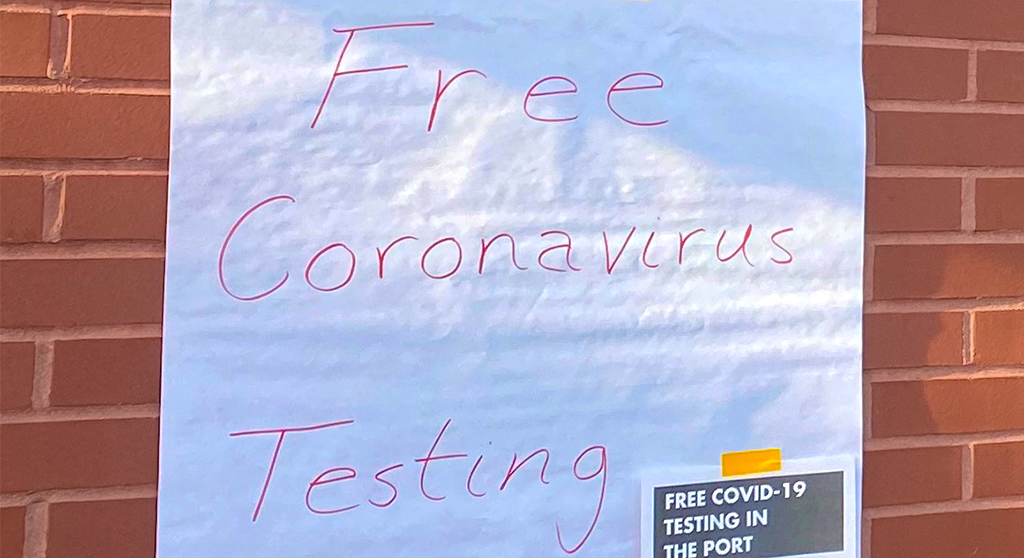 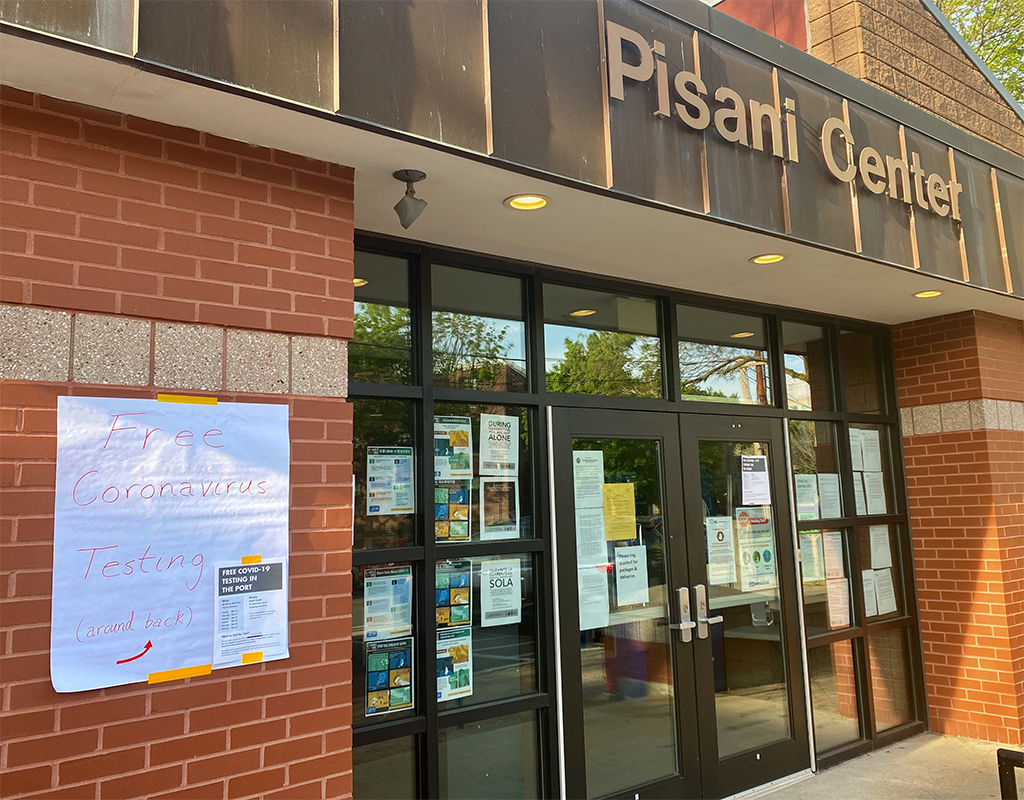 Coronavirus testing has moved on from the Pisani Center in The Port, with a city councillor suggesting more publicity was needed to get more people coming in. (Photo: Marc Levy)

North Cambridge will be the next neighborhood to get its own Covid-19 mobile testing site, possibly by next week. With Cambridgeport, the neighborhood is one of two new virus “hot spots,” Chief Public Health Officer Claude Jacobs told city councillors Monday, but another factor could be telephone calls from residents to Mayor Sumbul Siddiqui.

Siddiqui, who grew up in affordable housing in North Cambridge, co-sponsored a policy order Monday calling for testing in that neighborhood. “I had multiple conversations with [Jacob] over the last few weeks about particularly bringing some testing sites to this area, as I received a number of calls from residents, who, for many reasons, couldn’t come to East Cambridge,” she said.

The Cambridge Health Alliance has offered testing next to its clinic on Gore Street since May 8, inviting any Cambridge resident regardless of symptoms. And the city’s overall testing rate, the number of people tested per 100,000 population, continues to rank high among Massachusetts communities, according to the latest figures posted Wednesday by the state Department of Public Health. A total of 11,894 Cambridge residents have been tested, a rate of 10,546 tests per 100,000 population. That puts the city among the top 8 percent of Massachusetts communities.

The neighborhood “heat map” posted daily by Jacob’s public health department doesn’t seem to show that North Cambridge has a particularly high rate of Covid-19 cases. On Wednesday it was 76 cases per 10,000 residents, lower than East Cambridge, The Port, Wellington-Harrington, and even tiny Cambridge Highlands, whose population is so small that the case rate might not be the best measure of infections.

North Cambridge had the second-highest number of Covid-19 cases on Wednesday: 106. “That’s a lot of people testing positive, and they live far away” from the current testing site on Gore Street in East Cambridge, the department statement said.

North Cambridge also has several large housing developments for low- and moderate-income tenants. Black residents make up 23.5 percent of its population; Asian/Pacific Islanders make up 17.1 percent; and Hispanics make up 8 percent, according to a neighborhood profile by the Community Development Department. Covid-19 infection rates have disparately affected black people and low-income residents.

Tests are available from noon to 8 p.m at the Jefferson Park Clinic, 266-B Rindge Ave., on Tuesday, Thursday and June 13. Information is here.

Pushback over The Port

Meanwhile, councillor E. Denise Simmons is pushing to bring testing back to The Port, also citing phone calls. Simmons had persuaded Jacob to open a site there two weeks ago; it closed on Saturday after six days spread out over that period.

Simmons said on Monday that after the site closed she got three phone calls from “people hearing a little about it, but not knowing.” She asked Jacob to reopen testing at the Pisani Center, even once a week.

No, he said. “We don’t have any immediate plans today. As the need arises, we stand at the ready.” He added: “Keep in mind, the availability of testing kits, wear and tear on the staff, the focus is to be in North Cambridge next week. I don’t want to overcommit the resources.”

Simmons was not to be defeated. She had co-sponsored the North Cambridge test site policy order, and when it came up, she introduced an amendment requesting the Public Health Department to “reconsider” reopening the site in The Port. “I hope we can encourage through this order, not only to do what they said they were going to do, but go back to the neighborhood and continue,” she said. “When they do come back, make it clear it is short-term. And do a little stronger outreach than they did. I applaud what they did, but I hope that in North Cambridge, they will do a bigger push to let people know.”

The other hot spot that Jacob identified is Cambridgeport, which also has a lower rate of infections per 10,000 residents than several other neighborhoods. Jacob didn’t say Cambridgeport will get a testing site, but the department statement said Cambridgeport has the third-highest number of cases. On Wednesday the number was 82. “More positive cases in a neighborhood is one factor that can increase the likelihood of community transmission,” the department said.

The public health department in partnership with the Broad Institute of Harvard University and Massachusetts Institute of Technology has now tested about 4,000 people in targeted programs, Jacob said: at nursing homes and assisted living centers, homeless shelters, public housing developments for seniors and disabled tenants, and The Port.

The two most recent testing initiatives, in public housing and The Port, didn’t find many cases, Jacob said. A total of 776 public housing tenants and 212 people at The Port site were tested, he said, and “we had a very low positivity rate.”

Demand for tests appears modest. About 30 percent of tenants in the senior public housing developments refused or didn’t answer the door, though lack of information and some early morning visits on Memorial Day could have played a part. At The Port site, 212 people were tested in six days, or an average 35 each day.

One testing program in Cambridge has hardly been mentioned. In April, medics from Pro EMS collected blood samples from nursing home and assisted living residents and staff for antibody tests. The residents and workers gave those samples along with the nose and throat samples that were analyzed for the virus itself.

Antibody tests identify people who’ve had an infection in the past. The Broad Institute hasn’t released the results of the antibody testing in Cambridge long-term care facilities to the city health department or to individual facilities.

Michael Mina, assistant professor of epidemiology at the Harvard T. H. Chan School of Public Health and associate medical director of the clinical microbiology lab at Brigham and Women’s Hospital, who worked on the antibody testing project, said the Broad Institute has to meet new requirements of the U.S. Food and Drug Administration before it can disclose the results.

After the samples were collected in Cambridge, “the FDA came down very hard on serology [antibody tests], and this has led the lab to have to get different documentation in order to release the results,” Mina said. “We are working as fast as we can with them but, at the same time, this has caused a lot of delays on their end.”

The federal agency initially allowed virtually any antibody test maker to sell its products, but cracked down after scientists showed that many of the tests on the market gave incorrect results.

At a conference call with reporters Monday arranged by Harvard T.H. Chan, Mina said new, less expensive and faster virological tests are being developed that could allow repeated testing as businesses reopen. Nursing home staff could also be tested regularly to catch new infections, he said. That would protect residents, Mina said.

People could test themselves at home and get the result “almost immediately,” he said. Without these easier, cheaper tests, “the resources haven’t been there,” Mina said. “It’s been an extraordinary effort to test just once. The thought of doing that every week is not sustainable.”