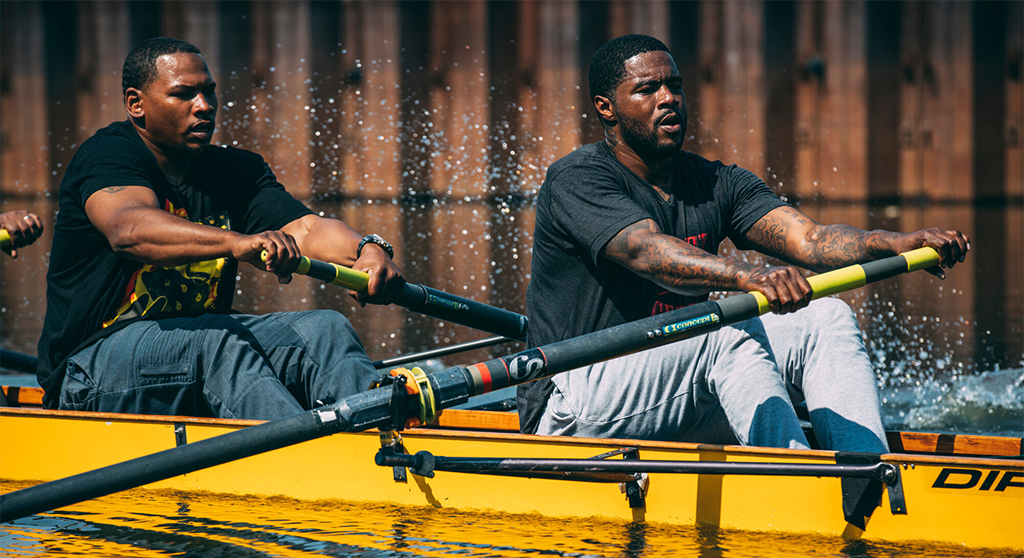 Adam Bhala Lough’s documentary dives into rise of the alt-right, beginning with footage of the America Nazi party assembly in the 1930s at Madison Square Garden and bookending with the now notorious Charlottesville march. Primary talking heads are white supremacist Richard Spencer, born in Boston, who coined the term “alt-right” – and became famous for being punched in the face – and Daryle Lamont Jenkins, an antifa activist who documents and exposes white supremacists. It’s intriguing to try to follow some of the rhetoric and logic espoused by the supremacists, until the the grim footage of the car crashing into the crowd in Charlottesville, Virginia. Lough wisely just sits back and lets the hatemongers do what they do with unabashed smugness (the reason Spencer caught that right to the head).

An ambitious feature directorial debut for British playwright Jessica Swale revolving around a quirky author (Gemma Arterton, Strawberry Fields in “Quantum of Solace”) who in the wartime British countryside is given a young Londoner evacuee (Lucas Bond) to tend. She’s reluctant, to say the least. They’re both misfits of sorts for the time – she had an interracial affair with another woman while married. The film may spend too much time dithering in backstory, and some of the turns toward the end feel too convenient or contrived, but the tenuous and tender chemistry between Arterton and Bond carries the film along easily and is bolstered by the gorgeous photography of the southeast coast of England.

Hollywood lost a legend when Olivia de Havilland passed aways last week at the age of 104. De Havilland made nearly 50 films in her long career and was Oscar nominated five times (winning twice), including a nod for her bravura turn here as a young wife incarcerated in mental institute after having a breakdown from past traumas. Leo Genn is George Sanders-esque as her attending psychologist. The journey to wellness is complicated by a cold Nurse Ratched disciplinarian, and the “pit” of the title is the lower levels of the asylum, where grim scenes of rec room madness are cemented by the excellent and vast supporting cast. De Havilland would finally win a Best Actress Oscar the following year for her turn as a young well-to-do in “The Heiress.”

One of the early films that would make de Havilland a household name and even has an uncredited (and unused – or so it is said) early contribution from F. Scott Fitzgerald, is now under cultural scrutiny for its romanticizing of the slave-owning South. The film, directed by Victor Fleming (after George Cukor was fired) is a gorgeous production from an aesthetic and technical standpoint. One of the first technicolor films made by Hollywood, the panning shot of injured and dead soldiers littering a street remains unforgettable. The casting of Scarlett (Vivien Leigh) and Rhett (Clark Gable) remains iconic, even as the film comes under questions of intent and embrace. Context and reflection are necessary and important when sitting down to re-screen.

The first of eight collaborations between de Havilland and Errol Flynn (they were the other Hepburn-Tracy). De Havilland is bubbly yet sassy as the daughter of a governor who is kidnapped by Flynn’s escaped prisoner/slave-turned-pirate. A classic swashbuckler from Flynn, whose charisma and star power remains eternally bright.

The film world lost another big one when Alan Parker died late last week. The British director was best known for his creative infusion of pop music into varied works such as “Fame” (1980), “Evita” (1996) “The Commitments” (1991) and “The Wall” (1982) – which remains a brain blow that needs to be re-seen (not available on streaming right now) – as well as hard-hitting dramas such as “Birdy” (1984), “Midnight Express” (1978, see below) and “Angel Heart” (1987). He helmed this depiction of racial divide in the civil rights-era South based on actual events, making it something of a true crime flick about the murder of three civil rights activist from the North. The small town where an old-school local investigator (Gene Hackman) and an RFK-picked northerner (Willem Dafoe) try to put the pieces together is Klan territory. The pairing of the two leads pays big dividends. Parker and the film would go up for Oscars, but win only Best Cinematography.

The real-life travails of Billy Hayes (Brad Davis), who gets busted smuggling drugs in Turkey and goes through a kangaroo court trial and hellacious prison term, was something of a PSA to me as a kid. It takes you deep in the bowels of despair, conveyed palpably by Davis – who should have been nominated for an Oscar. Like “The Snake Pit,” the lower levels of the prison are eerie chambers of madness and worse. Parker and the film would be nominated for Oscars (this was his only other nod) with screenwriter Oliver Stone and composer Giorgio Moroder. John Hurt (also nominated) and Randy Quaid round out the incredible supporting cast. The score by Moroder is infectious and chest rattling; he would collaborate with Stone two years later on “Scarface.”

Ang Lee (“Life of Pi,” “Crouching Tiger, Hidden Dragon”) directed this adaptation of Rick Moody’s dark novel about fractured couples in a swanky Connecticut enclave who engage in boozing and wife swapping to brush away the suburban malaise of the ’70s. The film’s smartly told through the eyes of the children (Katie Holmes, Elijah Wood, Christina Ricci and Tobey Maguire) who bear the fallout. The incredible cast also includes Joan Allen, Sigourney Weaver, Kevin Kline, Jamey Sheridan and Henry Czerny as the adults playing games that have circumstances.

Richard Gere and Diane Lane star in this adaptation of a Nicolas Sparks’ life-lesson novel, set in a quaint, coastal North Carolina inn where an edgy businessman (Gere) and a troubled married woman (Lane) form a bond that clearly has some complications. The film reminds me some of “The Secret: Dare to Dream,” another twee weepy with amiable leads and sentimental platitudes. A quick, light feel-good romance.

Local filmmaker Mary Mazzio’s documentary about the first all-black crew team in the county, made up of gang members from Chicago’s tough West Side. The plot arc as the team – assembled in the 1990s – gets back together for a reunion race couldn’t be more topical or inspirational in light of the current Black Lives Matter movement and calls for police accountability and reform.