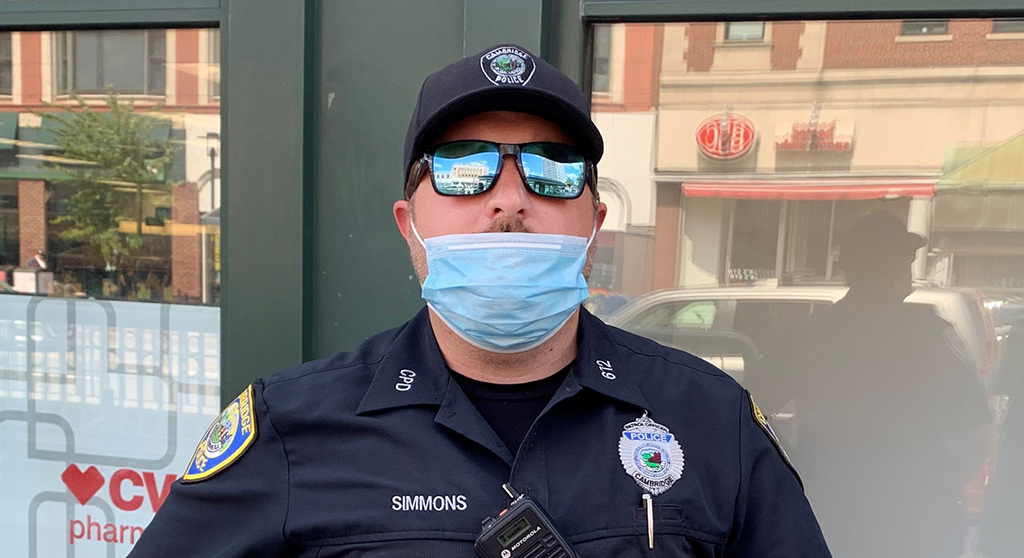 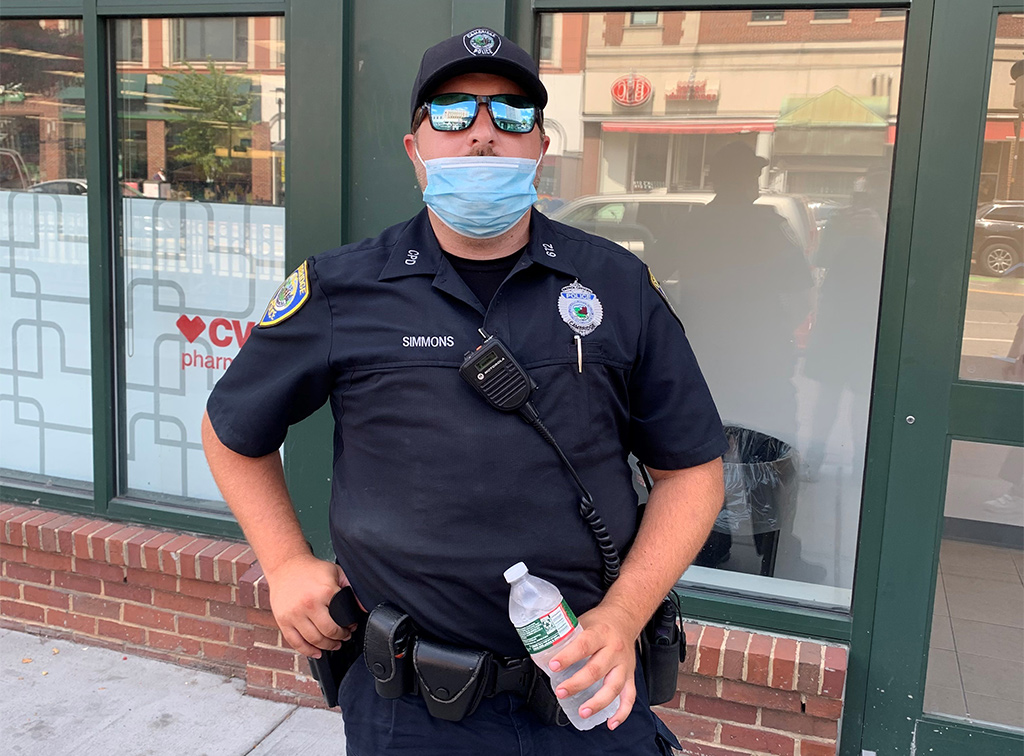 A Cambridge police officer is seen July 28 in Central Square wearing a mask the wrong way to guard against the spread of coronavirus. (Photo: Jim Wheaton)

A Cambridge police officer in crowded Central Square refused a request to wear his anti-coronavirus mask properly so it covered his nose as well as his mouth, a Boston lawyer says. And when the attorney later complained, a dispatcher allegedly told him that mask wearing is “a matter of freedom” and “we don’t live in a Communist country yet.”

Jim Wheaton, 60, described the incident at a special City Council meeting Wednesday to discuss requiring body cameras for police. Wheaton, who runs a legal clinic at Boston University and the Massachusetts Institute of Technology that represents student entrepreneurs, said it happened July 28 as he and his daughter, 27, were walking through the square in mid-afternoon as part of their daily travels for exercise during the pandemic.

The officer “just didn’t care,” Wheaton said in an interview. “It’s part of this attitude” on the part of some police in Cambridge and elsewhere that the mask-wearing edict doesn’t apply to them, he said.

He was particularly concerned because he has moderate to severe asthma and his daughter has a disability, putting them both at increased risk if they get infected with Covid-19, Wheaton said. Wearing a cloth mask mostly protects other people if you are infected and it helps prevent spread of coronavirus by people who have no symptoms and don’t know they have the virus.

Wheaton said police commissioner Branville G. Bard Jr. called him after the council meeting – Wheaton had told councillors that Bard never responded to his calls before the meeting – and “in fairness, he understands this is a problem. He understands he has officers out there who don’t always comply.”

Bard also told him that another officer, properly masked, who watched the encounter should have intervened under the department policy requiring police to step in if they see a colleague violating rules. 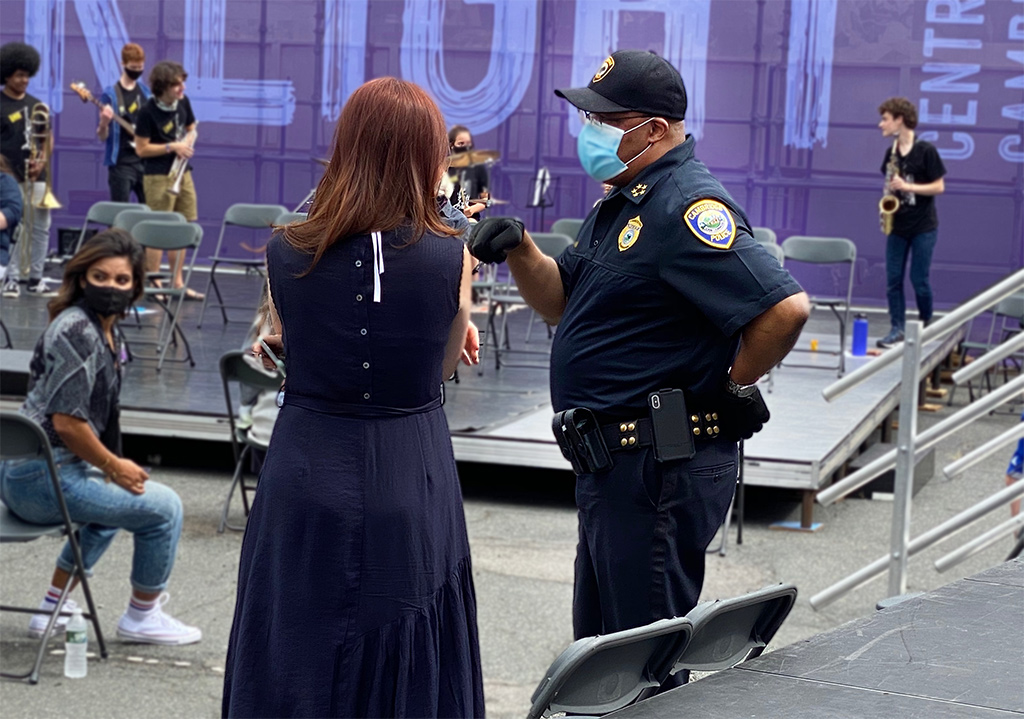 Wheaton said while he spoke to the officer who wasn’t properly masked, another pedestrian passed by within inches and when he pointed out that the other person wasn’t 6 feet away, the unmasked policeman insisted he was. When that happened, the other officer at the scene silently pointed to a closed-circuit camera that may have recorded the situation, Wheaton said.

Wheaton also said that when he initially complained, he was transferred to a lieutenant who hung up on him. And the dispatcher who talked about Communist rule erroneously told him the city’s mask order allows people not to wear masks outdoors, he said. The rule, which was relaxed in July for the summer, requires people to wear face coverings outdoors unless they know they can remain at least 6 feet from anyone else. Wheaton said he believes that no one on a city sidewalk can be sure they can meet that requirement, and especially no one in Central Square. At many times, groups of people who appear to be homeless are gathered closely in the square and not wearing masks, and it is difficult to remain 6 feet from others.

Wheaton said he had spoken to Boston Police Commissioner William G. Gross, Boston University Police Chief Kelly Nee and National Guard Major Gen. Gary W. Keefe about officers and guardsmen not wearing masks, and they had responded by reminding officers of the requirement. It didn’t have much effect on Boston and Boston University officers, but compliance among National Guard soldiers rose to almost 100 percent, Wheaton said.

The publicly aired story about masks and a “Communist country” follows a May incident in which a department superintendent, Jack Albert, accidentally used the department’s official Twitter account May 3 in an online conversation to bash U.S. Rep. Joe Kennedy III as “another liberal fucking jerk” like U.S. Sen. Ed Markey. Bard followed that in June with scripted remarks to the City Council that tried to discredit white public commenters talking about issues of race. “I heard a bunch of people looking for their ‘I’m a black ally’ receipts, hoping that they could somehow use it to pay off white guilt,” Bard said.

Councillors made no decisions at Wednesday’s meeting; some councillors said body cameras are warranted and others didn’t take a position or questioned how it would help. Mayor Sumbul Siddiqui said a seven-month randomized study in Washington, D.C., found that police wearing cameras didn’t use force significantly less often than those not wearing them. Bard, who introduced body cameras to Philadelphia Housing Authority police when he headed that department, said they could add transparency and increase trust and said he “is a general proponent.”

Bard also said storing images in the cloud would be the most expensive element of establishing a body camera program.

The city would have to decide how to protect the privacy of citizens who are photographed, ensure that officers turned on the cameras and audio, and would probably need to reach agreement with police unions, among other things, Bard said. The city might also need to get permission from the state Legislature through a home rule petition, city solicitor Nancy Glowa said.

Councillors agreed that more discussion should follow. No further meetings were scheduled.