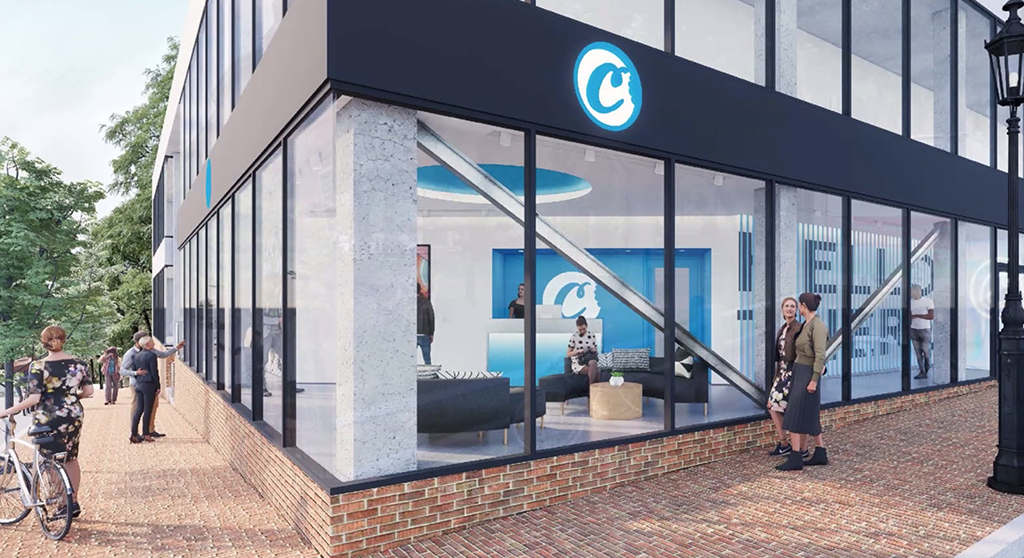 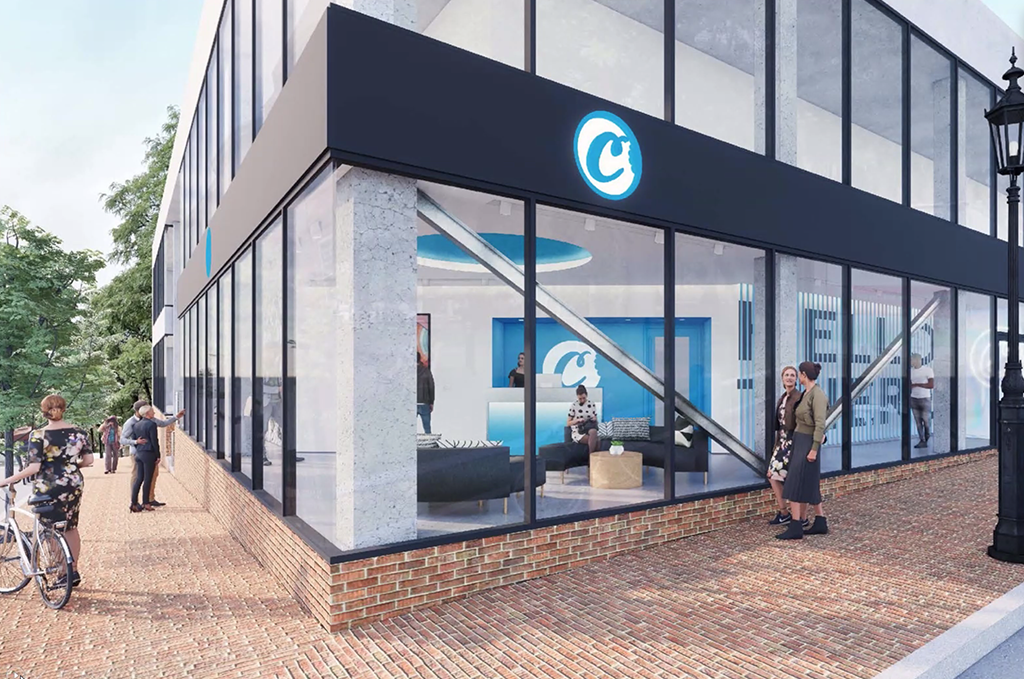 A rendering shows a proposed look for the pot shop Cookie on Winthrop Street in Harvard Square.

A cannabis shop called Cookie proposed for Harvard Square was introduced Thursday with a mix of community welcome and worries, and the store’s landlord released a letter explaining how he could oppose such businesses so bitterly a couple of years ago but seek to profit from one now.

Cookie would go in Raj Dhanda’s Crimson Galeria at 57 JFK St., across from Winthrop Park, taking up a 2,539-square-foot ground-floor space that was once a Staples. (A grocery store has been mentioned for Staples’ former basement space.) It would be a franchise of an international chain but 51 percent owned by the local Blue Enterprises – with a team including three members of Cambridge’s esteemed Moses family, Malaika, Taba and Maisha, and Brookline’s Damond Hughes, who has experience in real estate and in the liquor store business. Because Cookie itself is minority owned, the local franchise would fall fully into the “economic empowerment” category of cannabis shop ownership, unlike the medical marijuana dispensaries that are eager to add recreational pot to their menus.

Handsome renderings of the proposed storefront emphasized a mural for passersby and no sense of what was being sold inside, and even the name of the business would be skipped in favor of a simple logo showing the stylized letter “C” for “Cookie,” in sensitivity to the tourists, families and young people typically thronging the square. 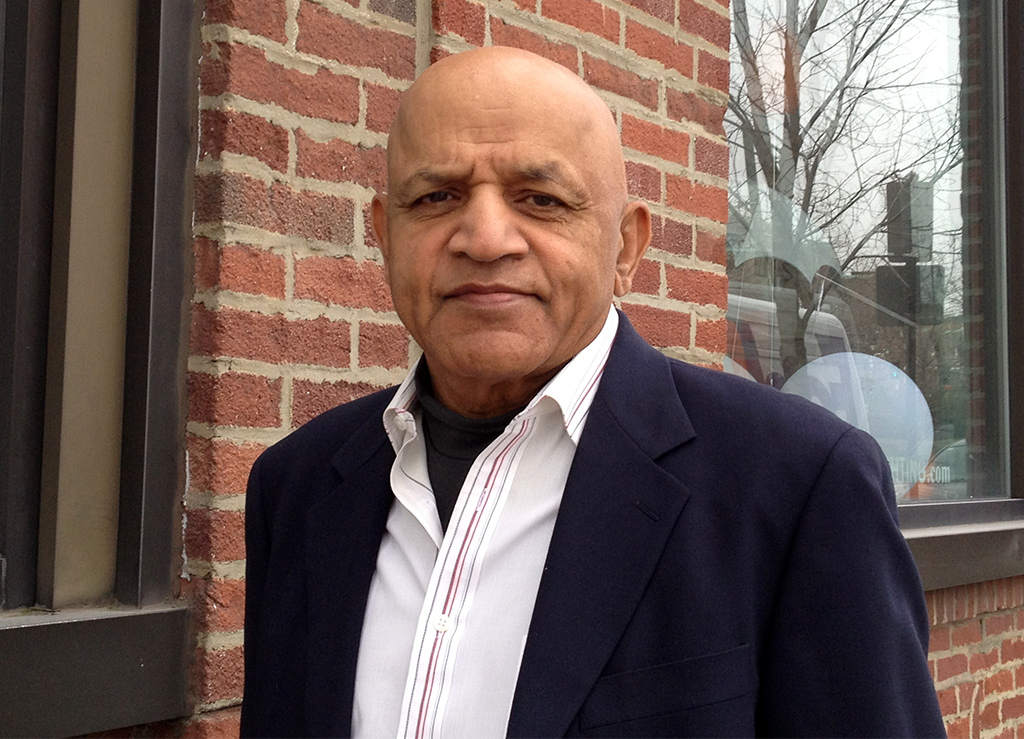 It would be just a few storefronts away from Healthy Pharms, a medical marijuana dispensary sold and rebranding as Mission as the result of a lawsuit from Dhanda filed in 2017.

“Marijuana businesses make bad neighbors,” Dhanda said in his suit, citing “pungent odors, attracting undesirable visitors, increasing criminal activity, driving down property values and limiting the rental of premises.” He claimed his property value had dropped $27 million because of Healthy Pharms and sought $81 million in triple damages, saying the the business was part of a racketeering conspiracy because pot isn’t legal federally.

Dhanda’s turnaround to lease space for Cookie didn’t go unnoticed during the Zoom video conference call Thursday in which the business team engaged with members of the public for nearly three hours.

Manny Ramirez, who runs the Black Sheep Bagel Cafe at 56 JFK St. with Shoshanah Garber, said he already has trouble with marijuana use on the street by customers of the neighboring Blue Moon Smoke Shop, in a building also owned by Dhanda.

“I’m concerned that the landlord of this facility also owns that smoke shop, and he can’t control what’s going on his building. I’m concerned that the same landlord was 100 percent against Healthy Pharms opening to the point of suing because this would bring down real estate value and many other values in Harvard Square – yet is now okay less than 20 months later in renting this space to you guys,” Ramirez said.

The business team was stuck trying to answer for a situation it had no involvement in. Malaika Moses said she believed Dhanda was “working on reconciling some of the past grievances he’s had with the community,” including working on an open letter explaining his position. 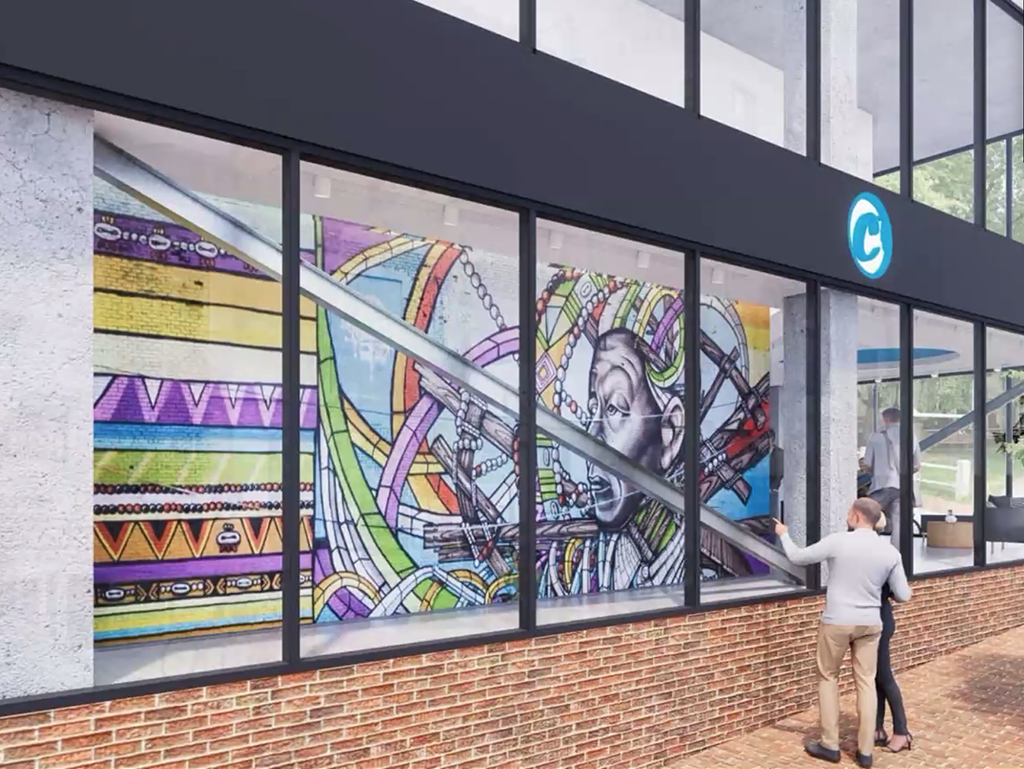 For them it was simple, she said: “Our team has reached out to many different landlords in that area, and he was the only one to actually be willing to sit down and say, here’s a lease opportunity.”

That letter, sent almost simultaneously, had two major themes: Dhanda’s wanting to help Blue Enterprises and Cookie, in part because he has felt discriminated against as an immigrant and person of color; and explaining his new position on cannabis shops.

“Along with the general public, my opinion on the cannabis industry has evolved. I realize now that prior views I had on many aspects of the industry were misinformed. I realize that at times in my opposition to prior projects, my characterizations of the industry at large were at times based on misconceptions,” Dhanda wrote.

He was skeptical of Healthy Pharms because he had information indicating its owners were “planning to quickly flip the operations to a separate investor once the permit was obtained, and perhaps to allegedly never operate it themselves, which ultimately proved to be essentially true in February 2019,” he said. It was impossible Thursday to ask what difference ownership made to the concerns outlined in his lawsuit, especially in a square where out-of-town ownership is common. The change of ownership in February 2019 came out of a confidential mediated settlement of his lawsuit that also, according to his lawyer, brought Dhanda “a substantial payment.”

“My vigorous opposition” to Healthy Pharms was because its ownership structure “made it hard to know who we as a community were dealing with,” Dhanda wrote. “The exact opposite is true with regard to the new dispensary.”

Healthy Pharms had been owned by Paul Overgaag of the Red House and Charlie’s Kitchen restaurants, fixtures in Harvard Square for decades. He confirmed Friday that the only reason Healthy Pharms sold – moving ownership to Canada from Cambridge – was because of Dhanda’s lawsuit. “We had an extremely large liability on us, of $81 million, which would have pretty much bankrupted all of us. And we were afraid of it. And because we’re afraid of it, we found a suitable buyer,” Overgaag said. No sale had been in his mind before the lawsuit.

When Blue Enterprises reached out, Dhanda said, he “was inspired by and felt included by their approach, and their vision of bringing equity to an emerging industry … The biases and barriers they had faced were known to me. The closed doors they had navigated in this city were known to me.”

Repeatedly during the Thursday call, residents of the square praised the proponents behind the Cookie franchise and expressed their support for the business – but not at the proposed location.

Their concerns, largely centered around the park that Cookie would border, seemed almost without answer: Ramirez and others said they knew it would be impossible for Cookie to guarantee its customers didn’t smoke in the park because people already smoked marijuana there, without Cookie existing; Kathleen Reed, senior minister at University Lutheran Church, seconded that the smell of cannabis already filters into her 66 Winthrop St. facilities, but also that from her front steps she can see people “downing not nips, but whole pints, in one long draft of whiskey. This is my neighborhood.” Suzanne Preston Blier of the Harvard Square Neighborhood Association said reluctantly that the group opposed Cookie because of the “billboard” for pot it would present to the park, even for a “product nearly all of us support to be legal,” largely because of the playful names of Cookie’s product, which might appeal to kids. Yet by law, Cookie would not be able to show or advertise anything having to do with its product on the building or through its glass.

The Blue Enterprises team members said they were committed to working with the community to find mutually acceptable answers, but Taba Moses had a pointed question of his own.

“I’ve heard that you guys say you support cannabis, and you support economic empowerment. What I want to know was, what was put in place with Mission, being that they’re 50 feet away from the same park?” Taba Moses said, noting that Mission would surely be looking to sell recreational pot as soon as it could.

“I’d like to propose that we work with you guys, the city and the neighbors to figure out what it was that you created with the dispensary down the street that made you feel like it’s okay for them to be 50 feet away, because there’s no big difference between [our] 20 feet and 50 feet, right? If you’re going to smoke in the park, you’re going to smoke in the park,” he said.

This article was updated Aug. 28, 2020, with comment from Paul Overgaag.