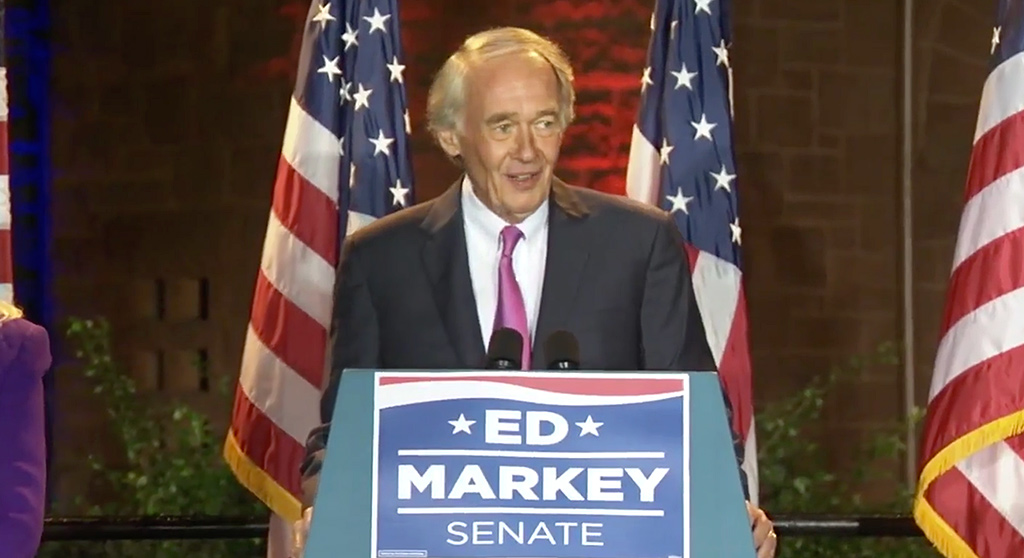 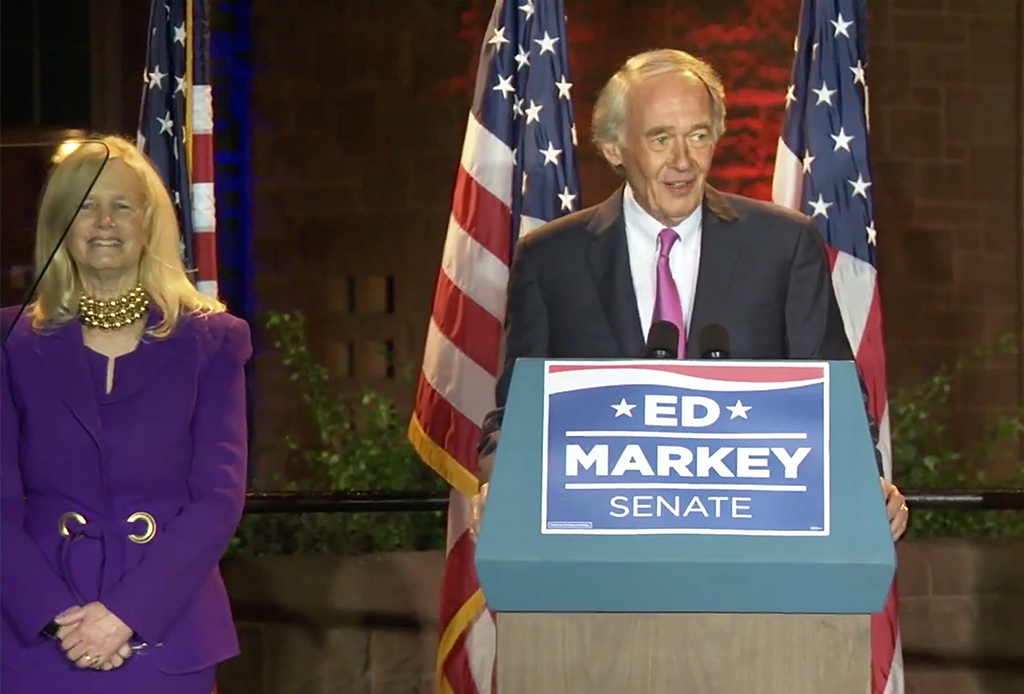 U.S. Sen. Ed Markey speaks to campaign workers and supporters Tuesday in Malden. With him is his wife, Susan Blumenthal.

In Tuesday primary voting, Democratic U.S. Sen. Ed Markey beat challenger U.S. Rep. Joe Kennedy III and will go to defend his seat in the November general election from Republican Kevin O’Connor (who beat Shiva Ayyadurai by a statewide result of 60 percent to 40 percent). Statewide, Markey led Kennedy 55.5 percent to 45.5 percent with more than 85 percent of the polls reporting in as of 1:30 a.m.

Statewide, Markey maintained a lead over Kennedy from the start of results being reported, most often edging into the double digits. Kennedy conceded the race at around 10:30 p.m., marking the first time a member of the Kennedy political dynasty lost a race for Congress in Massachusetts. He gave up his 4th House District seat to vie for Markey’s.

Markey was first elected to the U.S. House of Representatives in 1973, serving there until joining the U.S. Senate in a 2013 special election when John Kerry was appointed secretary of state to President Barack Obama.

Cambridge entered the primary with 71,469 registered voters but 32,503 ballots cast, city election officials said Tuesday. That’s 46 percent turnout in a city with a highly transient population of renters and students.

Somerville’s unofficial numbers show voters cast 25,682 total ballots. In the primary between Markey and Kennedy, there were 24,585 votes cast in Somerville: 19,169 for Markey to 4,781 for Kennedy, or 78 percent to 20 percent. (On the Republican side, O’Conner took 517 votes in Somerville to Ayyadurai’s 377. With the 915 total Republican ballots cast in the race, that gave O’Connor 57 percent vs. 41 percent for Ayyadurai.)

But in general, incumbents ruled the night.

Second Middlesex: Democratic state Sen. Patricia Jehlen beat challenger Gary Fisher soundly, with statewide results reported as giving Jehlen 84 percent of the vote to 16 percent for Fisher. In Cambridge, Jehlen took 8,166 of 10,626 total votes cast in the race, compared with Fisher’s 2,451 – or 77 percent to 23 percent. In Somerville, the incumbent took 19,387 votes to Fisher’s 3,782, or 84 percent to 16 percent. Jehlen was first elected to the Senate in 2005 to represent Somerville, Medford and parts of Cambridge and Winchester.

24th Middlesex: Democratic State Rep. Dave Rogers beat challenger Jennifer Fries and faces no Republican in November. With 87 percent of precincts reporting as of early Wednesday, districtwide Rogers had 60 percent of the vote to Fries’ 40 percent, but that was not thanks to Cambridge, where had 787 votes out of 2,055 cast in the race, while Fries took 1,265 – or 38 percent to her 62 percent. Rogers has held the seat since 2013, when he ran to replace Belmont’s William Brownsberger for a district that includes all of Belmont and part of Cambridge and Arlington.

27th Middlesex: Erika Uyterhoeven defeated Catia Sharp to fill the vacancy left by retiring state Democratic Rep. Denise Provost, with Somerville’s unofficial numbers giving 8,674 votes to Uyterhoeven and 5,313 to Sharp (with 14,012 ballots cast, Uyterhoeven took 62 percent of the vote to Sharp’s 34 percent). That’s despite allegations Uyterhoeven was not a resident of the district for the required year before the election and voted in Cambridge’s municipal election in 2019. The State Ballot Law Commission decided in June that she could remain a candidate, though – and without a viable Republican candidate, it looks like Uyterhoeven will be taking Provost’s seat in a district entirely in Somerville. Provost had served as a state representative since 2006.

29th Middlesex: Longtime Democratic activist and Democratic State Committee member Steve Owens will be taking over for Jon Hecht, who decided not to run again after holding his seat since 2008. Owens took 60 percent of a districtwide vote (with 79 percent of precincts counted early Wednesday) in a three-way race with Mark Sideris, who took 25 percent of the vote, and David Ciccarelli, with 15 percent. In Cambridge, Owens got 3,454 of a total 5,448 ballots cast, with Sideris second at 1,215 and Ciccarelli third with 760. As a percent breakdown, Owens improved on his districtwide take by getting 63 percent of the vote to Sideris’ 22 percent and Ciccarelli’s 14 percent. The district includes parts of Cambridge and Watertown.

34th Middlesex: Democratic State Rep. Christine Barber kept her seat in a race with challenger Anna Callahan, taking 3,458 votes to Callahan’s 2,421 in Somerville. Barber has held her seat since 2015; her district includes parts of Somerville and Medford.

Governor’s Council District 6: Democratic incumbent Terrence Kennedy looked safe from challenger Helina Fontes districtwide with 74 percent of votes reported as of 1:43 a.m. This Kennedy, after serving since 2011, led by 55 percent to Fontes’ 46 percent. But in Cambridge, Fontes took 15,195 votes to Kennedy’s 11,384 (a 57 percent to 43 percent win among ballots cast in the race by Cantabrigians); in Somerville, Fontes took 14,061 votes to Kennedy’s 8,051 (an even more lopsided result, at 64 percent for Fontes to 36 percent for Kennedy).

Polls were open from 7 a.m to 8 p.m.; heavy turnout statewide looked due to early voting and mail-in ballots becoming an increasingly large part of the mix. Early voting drew around 180,000 voters, Secretary of State William Galvin told media, contributing to the more than 768,000 Democratic ballots and 88,000-plus Republican ballots already received at the start of the week. With another 250,000 Democratic voters and 50,000 or more Republican expected at the polls Tuesday, statewide there might be 1.3 million votes total, Galvin estimated.

Cambridge election commissioners said they would meet at 1 p.m. Wednesday  to review provisional ballots. Their meeting can be attended via Zoom video conferencing.