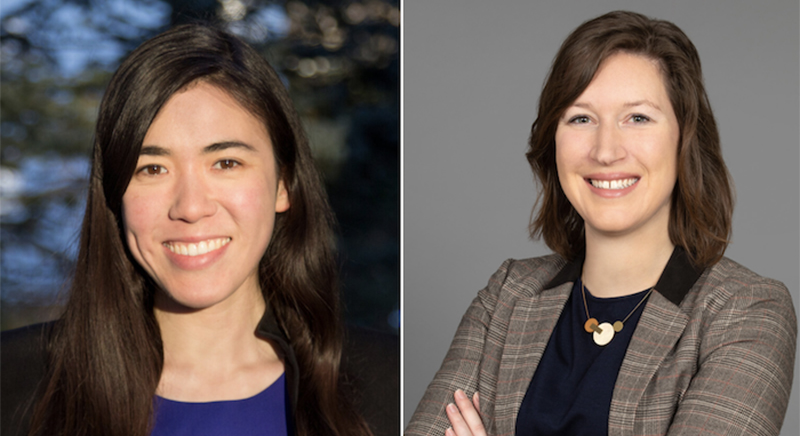 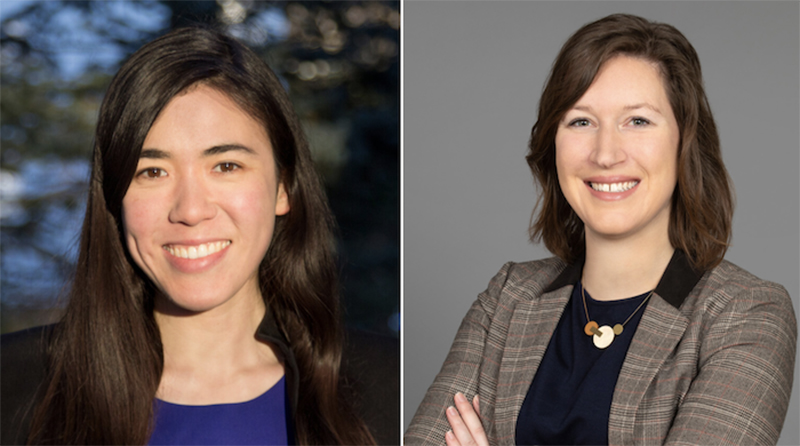 Erika Uyterhoeven and Catia Sharp are candidates for an open 27th Middlesex district seat in the state House of Representatives.

Close watchers of state politics expected the race to fill the vacancy left by retiring state Rep. Denise Provost to be hotly contested. The well-liked Somerville representative has held her seat in the 27th Middlesex District since 2006, and it seemed likely that several hopefuls would enter the contest for what could be a once-in-a-generation opportunity.

When the signatures were filed, though, only two candidates emerged – Erika Uyterhoeven and Catia Sharp. Without a viable Republican candidate, the winner of the seat will likely be determined in a Sept. 1 primary. But what the race lacks in numbers and duration, it’s already made up for in spectacle.

As this article was being reported, the candidates await a state ruling on Uyterhoeven’s eligibility to run. This month, her campaign had to go before the State Ballot Law Commission to respond to claims made by the Sharp campaign that Uyterhoeven was not a resident of the district for the required one year before this November’s election. Another complication: Uyterhoeven voted in Cambridge’s municipal election in 2019.

“I have every possible document under the sun proving that I am a resident of the 27th district of  Middlesex,” Uyterhoeven said. “These allegations are not truly about the soundness of our elections, but it does seem like it’s a political ploy given that it’s coming directly from my opponent.”

Reviews of the candidates’ stands on key issues reveal little space between Sharp and Uyterhoeven; both pledged to prioritize climate change, housing, criminal justice reform, education and transportation. Either should be able to play nicely with the other left politicians at the state and local level, and either should be in line with the average local voter.

For voters looking to distinguish between Sharp and Uyterhoeven, there is the experience they bring to the table, and personal stories have been front and center.

Katie Wallace is a veteran local campaign organizer who met with each of the candidates shortly after they entered the race. After making the rounds, Wallace said, “I felt confused about some of the things that Erika said that did not make sense to me. I felt that she was not being transparent.”

Wallace, who now works for Sharp’s campaign, said those doubts spurred her to impugn Uyterhoeven’s past and current living situation, leading her to eventually question the candidate’s public statements about her background. In addition to the residency issue, Wallace has called out how Uyterhoeven champions her growing up “in a working class home,” frequently describing herself in public appearances and campaign materials as the only child of a single immigrant mother who was a unionized flight attendant.

“Her union fighting on her behalf and on behalf of tens of thousands of other workers gave me the opportunity to go to college,” Uyterhoeven wrote about her mother on a Boston Democratic Socialists of America candidate questionnaire. “I am who I am because of organized labor.” She has won endorsements from Boston DSA (of which Uyterhoeven is a member), the Boston Teachers Union and Mass AFL-CIO.

Wayland’s annual list of residents confirms that Uyterhoeven and her mother – who is an immigrant from Japan, according to a Somerville Journal candidate interview – lived in a townhouse in the suburb from 1987 to 2009. The lists also substantiated that her mother indicated her occupation was “flight service manager,” a kind of senior flight attendant, from 1987 to 1996. But Wallace pointed out accurately that Uyterhoeven’s mother is a longtime realtor (her occupation on Wayland’s annual lists from 1997 to 2009) and landlord with a real estate portfolio that includes four units in downtown Boston that she bought before Uyterhoeven was born; a house in Newton that she purchased with another buyer in 2008; and a house in West Roxbury that she purchased in 2015.

“Obviously her mother has been supporting her,” Wallace said. “She can’t do anything on her own without her supportive wealthy mother.” The Sharp supporter also noted that Uyterhoeven’s late father, Hugo Uyterhoeven, was a prominent Harvard Business School faculty member. According to his HBS obituary, Hugo Uyterhoeven, an immigrant from the Netherlands, spent more than 50 years at Harvard, consulted for major corporations including General Electric, Royal Dutch Shell and Unilever, and served as director of “more than a dozen companies.” He owned the Wayland townhouse that Uyterhoeven and her mother lived in from 1981 to 2014.

Though Erika Uyterhoeven attended Harvard Business School, earning her MBA last year, she said she was not close with her father before his death in 2018. Aside from getting a few phone calls from him over the years, she said she was raised primarily by her mother. Asked if she was able to attend HBS tuition-free because of her father’s work at the school, Uyterhoeven noted, “I was on the most financial aid you could get,” adding that her father “did not encourage me to apply.”

As for her own employment history, Uyterhoeven’s LinkedIn page shows she has worked for three powerful corporate consulting groups over the past decade: the National Bureau of Economic Research (research assistant, 2010-2012), Compass Lexecon (senior analyst, 2014-2017) and the Boston Consulting Group (summer consultant, 2018). Jobs sometimes overlapped with stints in school – Wellesley College, the Toulouse School of Economics in France and HBS.

Uyterhoeven started working in high-level left-wing political campaigns in the same period. She was a national staffer for the 2016 Bernie Sanders presidential campaign, and worked with the grassroots organization Momentum in support of Labour Party leader Jeremy Corbyn’s 2017 general election campaign in the U.K., according to the Guardian. Here, she co-founded Act on Mass, an organization advocating for more transparency in state government, and worked on Nika Elugardo’s successful run for state representative in 2018.

Sharp, meanwhile, has a bachelor’s degree in international affairs and environmental studies from Northeastern University, according to her LinkedIn page, and spent a year as a government innovation fellow at the Harvard Kennedy School of Government. She has worked in state and county government, starting out with a stint at the Massachusetts Executive Office for Administration and Finance under Gov. Deval Patrick, where she eventually became a fiscal analyst. Sharp now coordinates Smart Justice initiatives with the Massachusetts Association for Mental Health and the Middlesex Sheriff’s Office.

“I think this race is not about huge differences of opinion,” Sharp said. “It’s really about who has done this type of work, that will accomplish this work for the people of Somerville.”

In March, Uyterhoeven bought a two-family home in Union with her husband and mother. The property cost $980,000 – covered with a down payment of $392,000 and a $588,000 mortgage. The plan was for her mother to move into one of the property’s units when she retires, Uyterhoeven said.

The purchase caught Wallace and Sharp’s attention, and raised the suspicion that Uyterhoeven had enough family money to move to Somerville to run for an open legislative seat.

“When you’re talking about representing a community, it’s really important to be part of that community,” said Sharp, who has lived in Somerville since 2013.

“[Uyterhoeven] clearly was misstating the way she grew up as a working class child of a flight attendant mother that was helped by the union,” Wallace said. “Her mother was a realtor for most of her life.”

Uyterhoeven dismissed criticisms of her background as unfair.

“This is sort of a damned if you do, damned if you don’t situation,” the candidate said. “My mom came to the United States in the 1960s. She worked as a flight attendant. No one would be asking about this if I was white. I’m very lucky my mom purchased property in the 1970s.”

Uyterhoeven declared herself a candidate for the 27th Middlesex District in January. In March, Catia Sharp also announced, and on June 5, challenged the length of Uyterhoeven’s residency, filing a formal objection with the Ballot Law Commission. Her campaign released a statement at the time:

The state constitution is clear: It requires candidates for state representative to live in the district for one full year prior to the date of the election. In the last year, it appears Uyterhoeven voted in Cambridge, not Somerville, in the November 2019 municipal elections, and registered to vote in Somerville on January 12, 2020, the same day that outgoing state Rep. Denise Provost publicly announced her retirement.

Uyterhoeven defended herself against the residency claims in a June 16 hearing, but neither she nor Sharp were willing to speak on the record about specifics from the hearing until after the State Ballot Law Commission issues its ruling. That decision is expected imminently, according to a representative for the Secretary of the Commonwealth’s office.

Uyterhoeven said she moved to Somerville in January 2019, into an apartment on Summer Street. State voting records, however, show that she dropped off the rolls in Cambridge on March 7, 2019, and became an active voter in Cambridge again Nov. 5 – Election Day – and voted there rather than in Somerville. Uyterhoeven changed her residency on the voter rolls to Somerville when she filed to run for Rep. Provost’s seat on Jan. 12.

Responding to questions about the discrepancy, Uyterhoeven said that she failed to reregister in time for Somerville’s municipal elections last fall and that despite the error, she filled out a provisional ballot from her Cambridge polling place.

“My intention was to fulfill my civic duty to vote,” Uyterhoeven said.

Confusing matters more, the state’s Office of Campaign and Political Finance shows Uyterhoeven making two donations to other candidates this year, but with her mother’s Newton property listed as her residence. Uyterhoeven said that was because the donations were made through Act Blue, which has an outdated listing of her mother’s address for billing purposes.

Ultimately, if the State Ballot Law Commission allows Uyterhoeven to stay in the House race, Somervillians in the 27th Middlesex District will settle the dispute between the candidates. According to the Sharp campaign, voters should make that decision knowing relevant facts about both aspirants.

Update on Aug. 3, 2020: The state’s Ballot Law Commission decided June 26 that both candidates could appear on the Sept. 1 ballot. Details of the decision can be found in Julia Taliesin’s coverage in the Somerville Journal.

Zack Huffman is a veteran reporter. He writes for DigBoston and VICE, and formerly reported for the Boston Courant and Bulletin Newspapers.