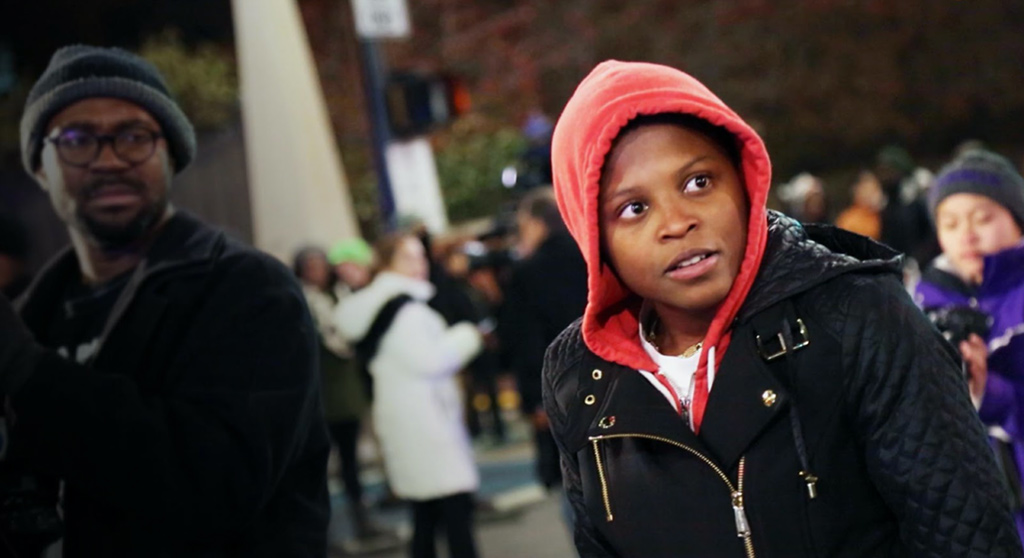 On Friday, the local documentary focal point hosts a virtual run of Ashley O’Shay’s “Unapologetic,” which follows Janaé and Bella, two abolitionist leaders of the Movement for Black Lives in Chicago, as they challenge the police department on systemic racial violence and a complacent administration. The screening is co-presented with the Roxbury Film Festival. First-time filmmaker O’Shay will be on hand for a Q&A on Nov 16.

Drew Hale’s dark delve borrows much from Thomas Harris’ Hannibal Lecter (“Silence of the Lambs”) and “American Psycho” (2000) without furthering the genre or even checking the requisite boxes. What makes Hale’s vision just compelling enough is his performance as Tom, a semi-employed L.A. actor who has a yen for flesh – or so it seems when he bites down and takes a good chunk out of his girlfriend’s bosom. Hale registers the off-kilter kick that Mads Mikkelsen nailed in the “Hannibal” TV series, but the what and the why are never really laid out. It feels like an eerie Halloween short stretched on too long.

Cambridge filmmaker Frederick Wiseman is still in the game at the age of 90 with his 48th documentary project, which trains its lens on all things Mah-ty and municipal goings-on within Gerhard Kallmann’s infamous brutalist City Hall facade in Boston’s Government Center. At four and a half hours, the film, shot in Wiseman’s classic cinéma vérité (fly-on-the-wall) style goes by in a blip, and Mayor Marty Walsh comes off as a 2020 progressive who looks hard to top. The aesthetic framing of skyline by cinematographer John Davey is an eye-pleasing wonderment, as is Wiseman’s recording of the hypnotic rhythms of trash collection and such. “City Hall” captures all that we are, were and can be, though it’s an eerie pre-Covid snapshot of our fair Hub. Screening now in the Coolidge Corner Theatre’s Virtual Screening Room and starting Friday as part of the Brattle Theatre’s Virtual Screening Room.

Ilisa Barbash and Lucien Castaing-Taylor’s hypnotic look at Montana mountaintop shepherding is Wiseman-esque in its observant, non-intrusive style. Castaing-Taylor later made “Leviathan” (2012), a riveting look at a Gloucester fishing boat mainly through the items hauled onboard. The film playing the Brattle’s Virtual Screening Room is a new restoration and an experimental first release from Harvard’s Sensory Ethnography Lab.

Brandon Cronenberg, son of creep-master auteur David, sets out on his own with this stynear-future hit-person thriller in which the operative, a lithe, elven can-do named Tasya (Andrea Riseborough), possesses the body of someone close to her target for a short few days. The virtual, psychological aspects call to mind some of dad’s signature accomplishments, namely “eXistenZ” (1999) and “Videodrome” (1983). The production values are much higher here, but the story’s not quite on par with pa; the film fails to flesh out Riseborough’s mind-melding assassin, which is too bad – when she’s in her own skin, Tasya is a compelling cross between David Bowie and Tilda Swinton. If only we knew what drives her to her deadly t

David Cronenberg transitioned out of the outré and macabre for two solid crime dramas starViggo Mortensen, “Eastern Promises” (2007) and this small-town thriller in which Mortensen’s father/diner owner efficiently takes out two hoods and is hailed as a local hero. That draws the presence of a crime boss (Ed Harris) who insists Mortensen’s Tom is a killer by the name of Joey. Cat-and-mouse identity games ensure. The cast is excellent, especially Harris, steely-eyed and snaky, with William Hurt and Maria Bello as Tom’s w

David Cronenberg’s set this pandemic pandemonium inside the confines of high-rise, whereaffliction is a sexually transmitted parasite that turns people into berserkers like in “World War Z” (2013) and “28 Days Later” (2002). Kitschy, creepy and pretty much the film – along with “Rabid” (1977) – that announced Cronenberg as a cutting-edge horror force and poised him for later masterworks such as his “The Fly” (1986) and “Dead Ringers” (1988).