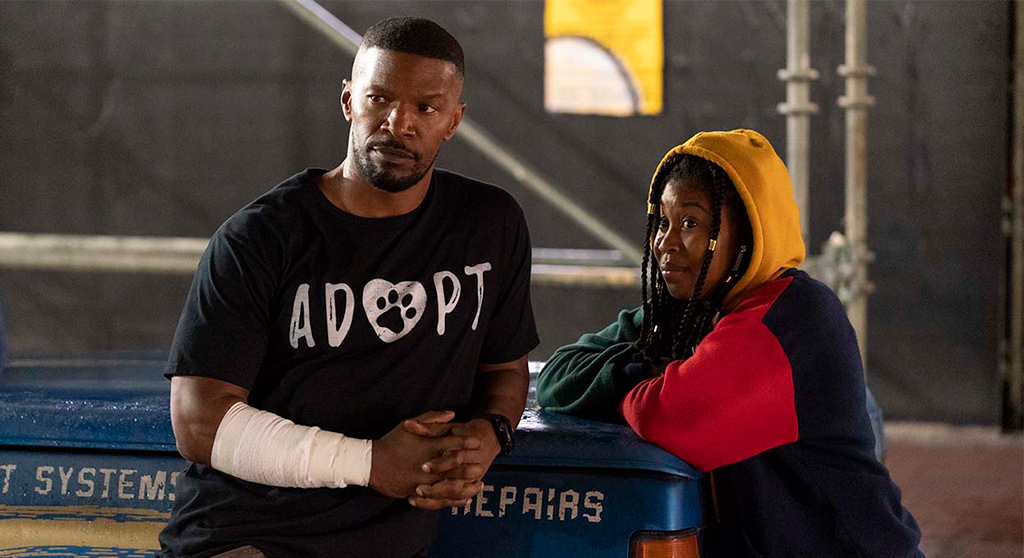 Theater rentals for you and your bubble pod to watch a favorite film are now available at the Brattle, and you can contact the theater for details. I can’t endorse or condone it; you need to practice personal safety during these challenging times.

For any Bruce Willis flick, I’m willing to lower the bar. I mean, this is the guy who made “Moonlighting” (the 1980s TV series) fun and went on to rock it in “Die Hard” (1988) and “Pulp Fiction” (1994). The charismatic actor – really more of a screen personality – has also made a ton of gump, such as this marginally passable backwoods crime drama about a big city yuppie (Hayden Christensen) who takes his family on a weekend retreat to a small Midwestern town. Willis pretty much phones it in as the police chief investigating a bank heist as Christensen and his pretty crew roll in and get tangled up with the robbers.

Super high production values make an alluring spectacle of sorts out of a wacky concept about a pill that can make you a superhero for five minutes – or a giant, spontaneous explosion. Of course, the big boost is Oscar winner Jamie Foxx and Joseph Gordon-Levitt as, respectively, a father on a mission and a cop trying to stamp out the drug trade in New Orleans. The catch about the pill is that it leverages your personality and skills for a custom super talent. One miscreant turns into filming torch and burns through walls; Gordon-Levitt’s cop can make bullets bounce off his flesh; and one bank robber gets the ability of camouflage. The pill itself is nonsensical in construct, a half-metal case housing an amber bolt of energy. Don’t think too much, just swallow.

The third installment of a now six-part action series reunites Bruce Willis with “Die Hard” (1988) director John McTiernan, folding in Jeremy Irons as a mad bomber and Samuel Jackson as reluctant partner. The provocative opener has Willis’ NYC cop John McClane wearing a sandwich board sign that says “I hate [N-word plural]” in the middle of Harlem as stipulated by Irons’ Simon. From there it’s a game of Simon Says, and if McClane and new friend don’t do as told, tall buildings go ka-boom! Irons is fabulous, but he’s no Alan Rickman.

It was announced last week that Rachel Weisz (“The Lobster,” “The Favourite”) would star in a series based on David Cronenberg’s creepy classic (based on a book by Bari Wood and Jack Geasland) about twin OB/GYNs who have professional and sexual relations with a famous actress (Genevieve Bujold). The pair also housed some pretty nasty surgical equipment in the back room. Jeremy Irons played the demonic twins; the new Amazon series will flip genders.

An eye-popping bit of history about the overthrow of the brief Iranian nationalist government in the year of the title by a coup d’état set in motion by the British and CIA that would return the shah to power, allowing foreign interests to get their hooks on oil-rich lands. Ralph Fiennes checks in to read the archival testimony of one of the British operatives key to the overthrow, because that operative is currently whereabouts-unknown. The archival footage shows Churchill and Truman in a telling light outside their bigger world stage accomplishments – Western arrogance on radiant display. The film takes a while to get you into the mix; director Taghi Amirani seems to want to share his arduous paper chase – while a necessity to make the film, it’s not interesting cinema, and detracts from the bigger picture. A perfect pairing with “Desert One,” which is playing the Brattle’s Virtual Screening Room.

Actor Ben Cross passed last week. He was best known as one of the British track athletes in “Chariots of Fire” (1981) but also played the baddie in this underrated dark horror flick about an afflicted 13-year-old girl, Anna (Charlotte Burke), who draws a lonely house on a hill and after an accident starts to have nightmarish dreams that cross reality and alter reality. In one scene there’s a little boy in the house who can’t come out to see her because she didn’t draw any stairs for him to get down – in the waking world she does so. The film is directed by Bernard Rose, who would go on to make “Candyman” four years later.

Another hardscrabble indie flick from Spencer T. Folmar (“Generational Sins”) about the opioid crisis fanning out in Rust Bucket Pennsylvania. Like “Project Power,” “Heroin” is all about drug eradication as community members take matters into their own hands in the wake of several deaths, à la Jan-Michael Vincent in “Defiance” (1981). The handsome and brooding Alan Powell plays a military vet who sounds the enough-is-enough charge. “Heroin”  is not so much about raw vigilantism as it is about standing up. Sherilyn Fenn (“Twin Peaks”) and Cathy Moriarty (“Raging Bull”) star as town matrons deeply affected. Nicholas Turturro and Brian O’Halloran (“Clerks”) also crop up in this topographical drama about a town taken under by addiction.

This exploration of the street life of teens in Los Angeles is well-meaning and powerful at its core, but director Michael Leoni makes the film nearly as much about him and his reflections as it is about his subjects. Leoni appears to be a nice, amiable human with a genuine affinity for his subject – but it’s when he stops intoning and lets the kids talk that the film finally digs under your skin.

An animated, psychedelic trip (think “Yellow Submarine” infused with anime) from Hungarian animator Marcell Jankovics (renowned for his 1974 Oscar-nominated short “Sisyphus”) that tells a rolling weave of Hungarian lore about the titled lad who grows into a Herculean entity known as Treeshaker. Quests include finding his two brothers and rescuing three princesses from the underworld where multi-headed dragons and more await. Hard to believe “White Mare” is just making its U.S. run now. The new digital restoration plays as part of the Brattle’s Virtual Screening Room.

Randall Christopher’s animated documentary – about the hunting and covert extraction of Nazi Adolf Eichmann by Mossad agent Zvi Aharoni in 1960s Argentina – is a riveting watch. The 2D animation and droll, reflective voiceover (Mark Pinter reading Aharoni’s words) is a winning mix. Christopher made the film in part to make up for his own youthful ignorance about the Holocaust.