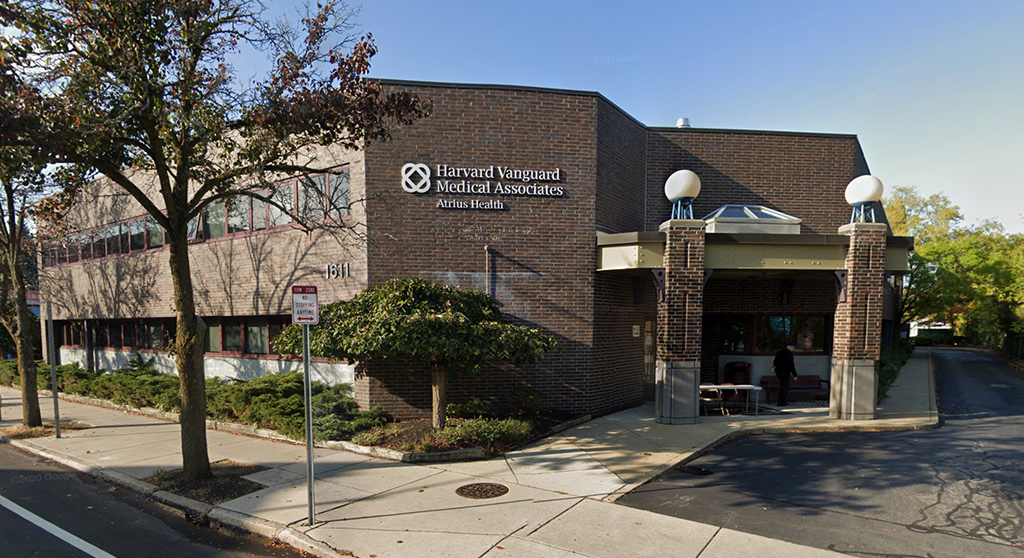 Atrius Health clinics such as this one in Cambridge didn’t get coronavirus vaccine doses to match those of other health systems operating in the city. (Photo: Google)

As people 75 and older became eligible to get a Covid-19 vaccine starting this week, some have had no trouble getting an appointment because their doctors practice at hospitals such as Cambridge Health Alliance and Mount Auburn Hospital, and the hospitals are issuing invitations. Others, who see doctors at the state’s largest independent physicians’ network – Atrius Health – are being told they must wait until at least mid-February because Atrius doesn’t have sufficient vaccine from the state.

Atrius includes Harvard Vanguard clinics in Cambridge and Somerville. It’s a mystery why the state hasn’t allocated enough doses to Atrius to inoculate the 40,000 patients it has in that age group – almost 9 percent of the estimated 450,000 Massachusetts residents who are 75 and older. Atrius chief operating officer Chris Andreoli said in a statement that the company is “working closely with the state to coordinate our vaccine rollout” and has been “impressed with their commitment and thoughtfulness throughout this massive undertaking.” An Atrius spokesman said the network had requested vaccine.

Katelyn Reilly, spokeswoman for the state Covid-19 Command Center, didn’t respond to emails seeking an explanation. State Rep. Mike Connolly of Cambridge said he’s asked specifically about Atrius, but in previous meetings involving Health and Human Services Secretary Marylou Sudders it appears that “the state is actively working out the logistics of providing vaccine to primary care practices, with a primary issue being the need to ensure the vaccine isn’t wasted or spoiled” because it comes in large quantities and must be used within a certain time.

He’s been told that large hospital systems have been able to work out the logistics “and now the focus is on setting this capacity up for smaller systems,” Connolly said. Sudders is meeting with the Massachusetts Medical Society this week on the issue, he said. Meanwhile, Connolly has requested information on Atrius and has told Sudders that “it is very important for the state to be clear about this other vaccine administration channel — and moreover, it will be very important that this channel is serviced in an equitable fashion, because we do not want it to be the case that patients of larger hospital or provider networks have better access to the vaccine than patients of other/smaller networks.”

State Sen. Patricia Jehlen of Somerville also wants an explanation. “I’d like to know that myself, as an Atrius member,” Jehlen said. Jehlen and state Rep. Marjorie Decker have criticized the state effort so far for its reliance on the Internet to find and make appointments and a dependence on mass vaccination sites accessible only by car and a complicated signup process. Decker said in a daily email to constituents: “The delivery system is failing seniors who can’t access and/or navigate the website, do not speak English, do not have transportation, or are unaware or unable to participate and engage in the vaccination process.” Jehlen said in a newsletter that “the [Gov. Charlie Baker] administration was absolutely not ready when they told tens of thousands of seniors to sign up. They weren’t ready to deliver the shots. They weren’t ready to make appointments.”

Baker has blamed inadequate vaccine supply from the federal government for problems. The governor promised to set up a telephone system for appointments this week, “but that will not solve many of these challenges,” Decker said.

Some Cambridge residents want a city-run vaccination site here. “Cambridge has fallen on its face,” said a letter to the City Council last week. The Cambridge Public Health Department has said it plans to get involved in vaccinations when the general public can get shots: in Phase 3, not expected to start until at least April. But some recent updates have implied that the only reason the city isn’t operating a local site now, during Phase 2, is that the state hasn’t allocated the necessary vaccine. City officials sent postcards to residents last week reiterating that claim. Health department spokeswoman Susan Feinberg said the city will disclose its position at the City Council meeting Wednesday.

One local issue – setting up onsite vaccinations for residents of public and private affordable housing developments for seniors and disabled residents – remains in play. The state has included those residents in Phase 2, but the Cambridge Housing Authority is still working with the city health department to get enough vaccine from the state, said housing authority executive director Michael Johnston. Legislators Decker and Connolly say they are pressing state officials to facilitate onsite vaccinations.

The state cut vaccine allocations to the Cambridge department and most other local health boards to no more than 100 doses a week, but state officials said last week that they could come up with necessary vaccine if local agencies survey tenants and report how many doses they need. At the same time, the state is holding a virtual meeting with affordable housing operators Wednesday to tell them how they could help their tenants get an appointment at a mass vaccination site such as Fenway Park or Gillette Stadium. Housing authority board members condemned that option at a meeting last month.

When the state reduced the city’s vaccine allocation, the health department had given 1,000 first responders their first dose of vaccine and was in the midst of vaccinating homeless shelter residents. Feinberg, at the public health department, has not responded to a question about whether the city has finished first-dose vaccinations at shelters.

Meanwhile, eight more Cambridge residents have died of the virus since Dec. 30, bringing the total to 116 deaths as of Tuesday. One of those who died was a resident of nursing home Neville Center, according to a state daily report; the city reported the death on Thursday but does not identify long-term care facilities with cases and deaths.

The city health department has identified one census block – the smallest geographic unit of the U.S. Census – in North Cambridge where there were 78 cases in the first three weeks of January, compared with 91 cases in the previous nine months, according to notes of the city’s Jan. 21 Expert Advisory Panel meeting. “There are several large residential buildings in this area, including subsidized, public and market-rate units,” the notes said.

The health department zeroed in on two big buildings where the city’s cadre of young Covid-19 educators went door to door to offer coronavirus tests and flu shots. City workers are talking to managers of “one set of buildings” about “better adherence to indoor gathering and mask use restrictions. In many buildings appropriate signage has been posted in lobbies and hallways near the elevator indicating capacity limits, but elevator capacity continues to make proper distancing difficult,” the notes said.

On the brighter side, Covid-19 hospitalizations at Cambridge Health Alliance’s two hospitals in Cambridge and Everett are declining and hospital leaders “are optimistic,” according to the meeting notes. Still, the prospect of new variants of the virus – three identified so far – worries scientists.

A good step would be to “emphasize in public guidance that the pandemic isn’t over and even those who have received the vaccine need to continue all mitigation measures,” the minutes say.