‘Nomadland’: Traveling stoically from job to job, and sometimes it’s cold and the van breaks down 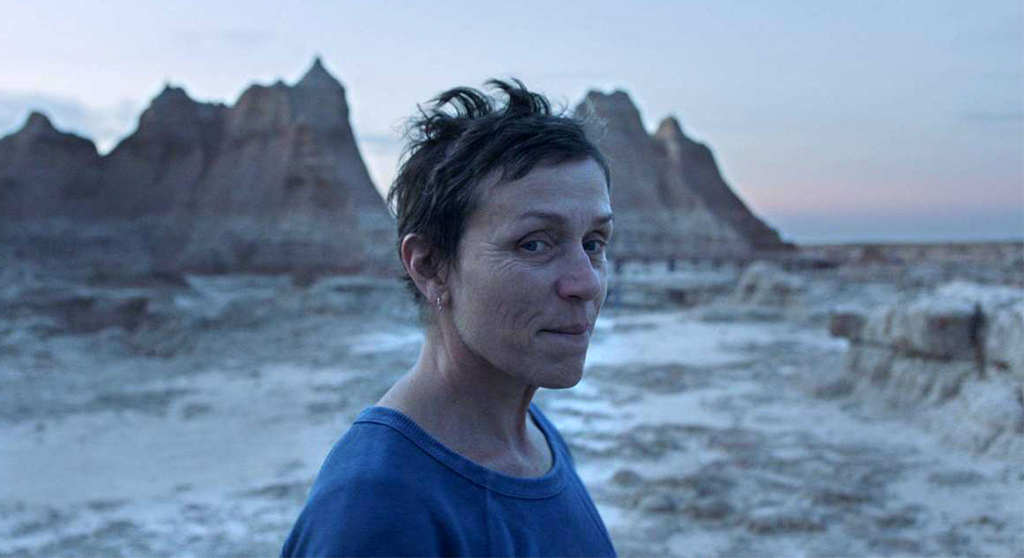 ‘Nomadland’: Traveling stoically from job to job, and sometimes it’s cold and the van breaks down

The films of Chloé Zhao, a short list that is certain to grow, are something else – a unique blend of narrative fiction and docudrama reenactments in which real folks play slightly fictionalized versions of themselves, if not just themselves. This kind of filmmaking went disastrously off track for Clint Eastwood in 2018 when he cast the U.S. tourists who thwarted a terrorist attack on a French train as themselves in “The 15:17 to Paris.” Neat idea, but the result was inert, nearly unwatchable. And yes, Jackie Robinson played himself in “The Jackie Robinson Story” (1950), but Zhao in her somber wonderment “The Rider” (2018) cast Brady Jandreau as Brady Blackburn, a horse trainer from the Pine Ridge Indian Reservation in South Dakota who, because of a giant scar across of his noggin, is told he can’t ride a horse for fear he’ll take another toss and die. Guess what? Jandreau really has that scar and lived that life that Zhao recreates from the inside out, and that’s the allure of Zhao’s craftsmanship; she’s able to capture that, from the union between man and land to the quiet, tumultuous struggles within.

Here Zhao has added to her stock, inserting a Hollywood A-lister into the mix of regular folk. Frances McDormand, however, is not your typical A-lister, ever amiable and humble in comport, but she is top tier – of that we need to be clear, lest you want to have a backyard scrap. Sporting short cropped hair, McDormand plays Fern, a semi-recently single middle-aged woman cruising the northern plains, bouncing from one seasonal McJob to the next, cleaning toilets at a Badlands glamping site and slinging grub at a rustic lodge-type resort. It ain’t pretty, but Fern seems resigned and dutiful in her tasks. It’s a way of life that affords her freedom – I half expected The Who’s “Going Mobile” to cue up, but there are times Fern comes out from a night in her comfortably worn van wrapped in three layers of blanket and the chill is bone-rattlingly real. And then that aging van dies on her.

That’s about as complicated as “Nomadland” gets. It’s not about a grand crisis du jour, but the tao of our motorized, nomadic workers and their community. The film, like the Jessica Bruder nonfiction book it’s based on, subtitled “Surviving America in the Twenty-First Century,” is a meander through meanderers who were ostensibly downsized or tossed out of the ivory tower during the 2008 financial meltdown and either couldn’t find their way back or didn’t want to.

For her cast, Zhao does what she did in “The Rider”: Linda, a seasoned nomad with a thick, lustrous silver mane, is played by Linda May; and Swankie, another big-personality road warrior whom we learn has eight months to live, is played by Swankie. You get the idea. The acting by some is great at turns, but it’s not always consistent, and you realize just what you have in someone as good and capable as McDormand (she, the film and Zhao and will continue to reap accolades; the film was part of the Day’s Top 10 Films of 2020 and it won the Boston Society of Film Critics’ Best Picture and Best Director honors). We do get a beat deeper in on Fern when she stops by her sister’s house for a visit. They live very different lives, and in that short stop we learn all we need to know about Fern and where she’s going. Fern is a lonely soul, and it’s something she embraces. David Strathairn drops in as a campground worker named, well, uhmm, Dave who takes a liking to Fern – their online profiles, should they ever get back on the grid, would be a 100 percent match – but Fern holds him at bay. “I have to do laundry,” she says to a holiday invite.

The real star of the film is the Badlands and plains, so alluring and grand and framed so by cinematographer Joshua James Richards, who collaborated with Zhao on “The Rider.” How “Nomadland” ends isn’t really the point; it’s about the journey and disconnected people connecting, finding solidarity in their transient way of existence.