‘The 15:17 to Paris’: A trio of true heroes, reenacting a tale for Eastwood untrained 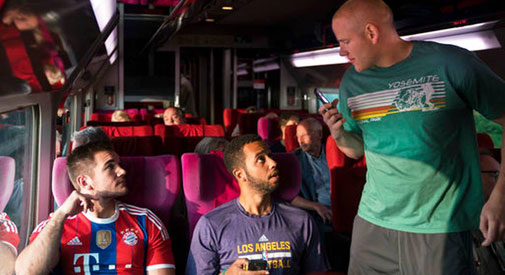 ‘The 15:17 to Paris’: A trio of true heroes, reenacting a tale for Eastwood untrained

Much will be made of Clint Eastwood’s decision to use non-actors to play themselves in “The 15:17 to Paris,” a story of American heroism abroad, when two servicemen on leave and a friend thwarted an August 2015 terrorist attack on a train. The trio acted unselfishly, out of genuine concern for the lives of others – it’s the kind of stuff movies are made of. 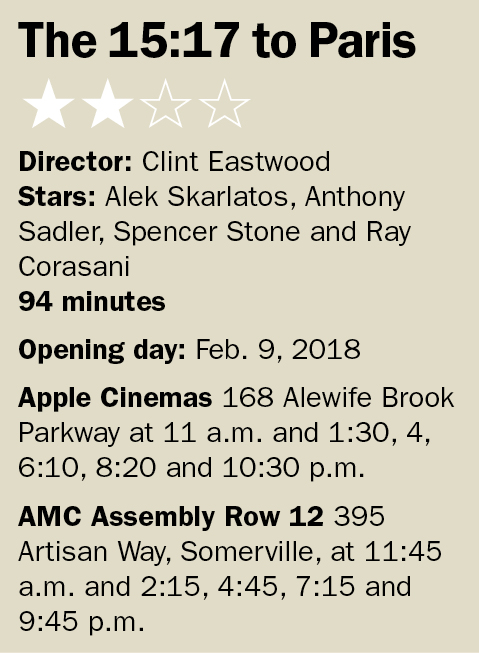 Eastwood, who’s heading toward 90, has seen it all before, starring as the “Man With No Name” in Sergio Leone’s spaghetti westerns, then making his own westerns (“Unforgiven”) and other films with subject matter ranging from the afterlife (“Hereafter”) to female boxing (“Million Dollar Baby”) and the end of Apartheid-cum-rugby (“Invictus”), as well as engaging in jingoistic flag waving, as many said of his depiction of American marksman Chris Kyle in “American Sniper” (2015) or his appearance at the Republican National Convention to help presidential candidate Mitt Romney challenge Barrack Obama, talking to that now infamous “empty chair.”

Going into the film I was fearful of such heavy-handiness, but Eastwood, dealing with a somewhat trickier and more fickle beast, sticks to the facts. Any flag waving comes from the pride that wells up in our hearts as our boys get it done, clearly on the side of the right, putting themselves in harm’s way to protect those less able – and there’s no political jiggering either, no agenda, just the flash of the muzzle of a terrorist’s gun and an impromptu response aboard a high-speed train moving steadily toward the European city of the film’s title. The final 20 minutes aboard the train are as riveting as they are harrowing, slow and quick, brutal and awkward with plenty of grimace-invoking moments and plenty of blood. It’s action reimagined in real time without showy elongation or unnecessary underscoring – a heartbeat is a heartbeat, and severed arteries let out profusely.

Where the 90 minute-ish film doesn’t quite hold an edge is in its ramp-up and philosophical focus – the repeated pontification about fatefully moving toward a singular destiny is a lot to swallow. First-timer Dorothy Blyskal, penning a script from the three Americans’ stories and the fast book penned by Jeffrey E. Stern about the incident, builds a story of three lifelong friends, Sacramento misfits minted in their failure to conform at parochial school and regulars in the principal’s office – two tagged with ADD and the other among the few black kids at the school. It’s an amiable yet hokey “Stand by Me” moment that runs on for nearly a third of the film, this after we get about 30 seconds of the shooter (Moroccan-born Ayoub El Khazzani, played by Ray Corasani) hauling an AK-47 out of a duffel bag in the train’s bathroom.

It takes even longer to get back to the action on the train, as the boys, now older and played by themselves, struggle to find their vocation in the world but remain close. The wooden but handsomely chiseled Alek Skarlatos has gone into the National Guard and been sent to Afghanistan to aid in police duties; Anthony Sadler enrolled at Sacramento State; and Spencer Stone, the most charismatic of the lot and resembling something of a younger Woody Harrelson in countenance and personality, tries to make it into an elite program in the Air Force and fails due to tardiness. The film ultimately becomes more about Stone’s journey than that of his mates. As the narrative has it, Stone faced more challenges and, when the fight on the train breaks out, he’s the one who’s large and in charge and laying it all on the line – he nearly lost a thumb from the terrorist wielding a box cutter and applied life-saving measures to victims in the aftermath.

Stone may find a future in film; the other two, I’m not so certain. The hodgepodge of narrative showing the bonds of friendship (over and over) and the three separate paths to the train ultimately becomes an unnecessary slog. Eastwood, a capable and competent filmmaker, seems to have trusted the script and his non-actors more than his instincts. Peter Greengrass’ “United 93” (2006) or the forgotten 1967 classic “The Incident,” in which a New York Subway car is terrorized by two hoods, with the passengers unable and unwilling to act individually or collectively, are similar in construct yet more effective – the stories of the individuals are told  through  their actions in that moment, not a rewind or backstory digression that saps the narrative’s forward movement. The film might have made a riveting 30-minute dramatic recreation, but as is, Clint makes three heroes’ day, and rightfully so. Their names will float again briefly to the top, and this meandering film and their collectively so-so screen go will be forgotten shortly after.