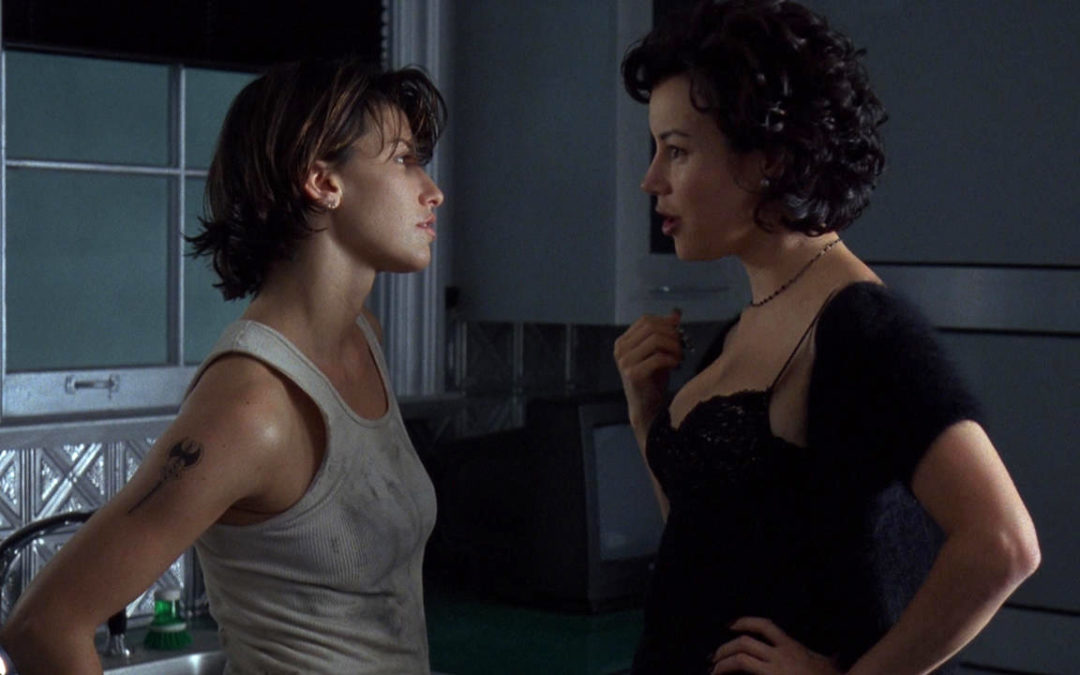 Wicked Queer at the Brattle, ‘Bound’

The Wachowskis, best known for their game-changing work on “The Matrix” trilogy and other sci-fi/fantasy films such as “Jupiter Ascending” (2015) and “Cloud Atlas” (2012), signed on as a filmmaking force back in 1996 with this far more intimate but no less formative debut. An erotic neo-noir, “Bound” hasn’t gotten the credit it deserves for style- and barrier-pushing. Gina Gershon and Jennifer Tilly star as Corky and Violet, lovers looking to frame Violet’s violent boyfriend (Joe Pantoliano) to make it look like he stole millions of stashed mob money. The chemistry between Gershon and Tilly is electric. Despite being shot on a shoestring budget, the film impresses stylistically, wearing its pulpy and noir-ish influences on its sleeve, creating a refreshingly campy crime thriller that has become something of a cult classic. “Bound” streams as a part of the Boston Wicked Queer Film Festival via The Brattle Theater. (Allyson Johnson)

In the near future, the Internet of things has connected nearly everything, even our brains, in something called “The Tangle,” while there are those who try to get offline and hide from the far-reaching digital tentacles. “The Matrix” this is not, with much of the film being talky bits in windowless rooms where participants are concerned with the murder of a Tangle operative. A gumshoe (Joshua Bitton) seems to have all the answers, and for that he undergoes some torture. Hazmat suits, noir-ish attire, cheesy FX, overbaked dialogue (“You know we have the weight of the world on our shoulders”; “This is no country for old men”; and so on) and old-school rotary phones all add to the sci-fi cockamamie. Steaming on Amazon Prime. (Tom Meek)

Adapted from her short film of the same name, Emma Seligman’s dark, satirical coming-of-age story opens with Danielle (Rachel Sennott) having an “Oh daddy” tryst with Max (Danny Deferrari), her financial benefactor; Danielle is an art student who can’t make ends meet, and so she babysits and dabbles in sex work – something of a hard sell at first, especially after we meet her parents (Polly Draper and Fred Melamed, both excellent), but just a minor, early bump. The real heat to Seligman’s barbed comedy comes when Danielle and Max wind up at the same wake/shiva later that day; Danielle with her parents, Max with his wife and newborn baby. Further complicating matters are Danielle’s peevish ex-girlfriend Maya (Molly Gordon) and an incriminating, missing cellphone. Seligman draws it all out with a hot fire threatening in every scene. The tactic gets a bit overplayed but in the end, the performers, deep into their roles and Seligman’s vision, hold it tight on its track of dark dysfunction. At the Landmark Kendall Square Cinema, 355 Binney St., Kendall Square. (Tom Meek)

Languorous, long and littered with quirk, Azazel Jacobs’s tale of entitled ennui might not be everyone’s cup of tea. In construct, it feels like something from the pages of a J.D. Salinger book if adapted by David Lynch. You might ask, would that not be Wes Anderson? Well, yes, but this is decidedly more dour, and not as even as an Anderson offering. The plot centers on Frances Price (Michelle Pfeiffer), a New York socialite who has run out of cash in the wake of her husband’s death. Connections provide a free crash pad opportunity in Paris; the only dilemma is how to get there frugally. A cruise ship is the answer. In tow is Frances’ son, Malcolm (Lucas Hedges, “Manchester by the Sea,” “Let Them All Talk”) a malcontent who for mercurial reasons walks out on his stateside fiancée (Imogen Poots, “The Father”) and hooks up with a cynical psychic (Danielle Macdonald, “Patti Cake$”) while crossing the pond. Once in France there’s a seance to talk to Frances’ ex (Tracy Letts) and some freaky business with a black cat. Not all of it gels, but Frances and Malcolm’s indignant arrogance is a powerful magnet; chin up, eyes down the nose judging the rest of the world with bare pockets. At the Landmark Kendall Square Cinema, 355 Binney St., Kendall Square. (Tom Meek)

An interesting take on the admissions scandal that made front page news because of the high-profile universities (USC, Stanford), celebs (Felicity Huffman, Lori Loughlin) and people of power involved. In his pursuit, filmmaker Chris Smith (“Tiger King,” “American Movie”) mixes in archival footage, talking heads (agents, college officials, recruiters and admissions consultants) and re-dramatizations. There’s so much of the latter that if you didn’t know it bore the “documentary” tag, you might think it a fictional film based on real events. Smith’s lens homes in on Rick Singer, the court jester of the whole debacle, who targeted less popular college sport teams in need of funding (water polo, crew), telling desperate parents he could get their kids in with “a donation.” Then there’s the whole test-taking scam. Singer, who doesn’t appear in the film – just footage – gets played by Matthew Modine in damning dramatizations. Singer not only got rich off the scheme ($10 million); he also rolls over on his clients and works his con game skills for the FBI. The entitlement and arrogance on display all around overwhelms, though there are those like the Stanford sailing coach who get caught in the crosshairs of something they’re not fully aware of and pay the price. You feel bad for them, but not so much the others openly on the take with grave avarice. An unequal playing field if ever there was one. Streaming on Netflix. (Tom Meek)

Larry Rippenkroeger, best known for his stunt work on “Waterworld” (1995) and the “Die Hard” films, makes his directorial debut with this lo-fi throwback that has the guttural, sophomoric tang of, say, “Caddy Shack” (1980), “The Sure Thing” (1985) or “Hot Tub Time Machine” (2010). It’s not quite on par with those cheeky classics, and a dicey do given the social milieu (#MeToo, etc.) that Rippenkroeger pulls off after initial gags such as “Honky Kong” (throwing kegs at drunk golfers trying to come up out of a sand trap) and “Camel Towing” (a car towing service) look to be tone-deaf record scratches. Instead of golf or skiing, we get Jet Ski racing. The new kid on the circuit (Glenn McCuen) and the bad-boy cheater champ (Brian Combs) are pretty, generic hunks that are hard to get vested in. Old champ and coach (Trevor Donovan) is a hunk with more than two dimensions and Max Adler as pit crew and “Camel Tower” driver Danny “Dog” Bassett adds a needed goofy, sidekick schtick with aplomb. Available for rent and purchase on Amazon Prime, Apple+ and other services. (Tom Meek)