‘The Father’: Unforgettable visit with a patriarch who increasingly can’t remember his own family 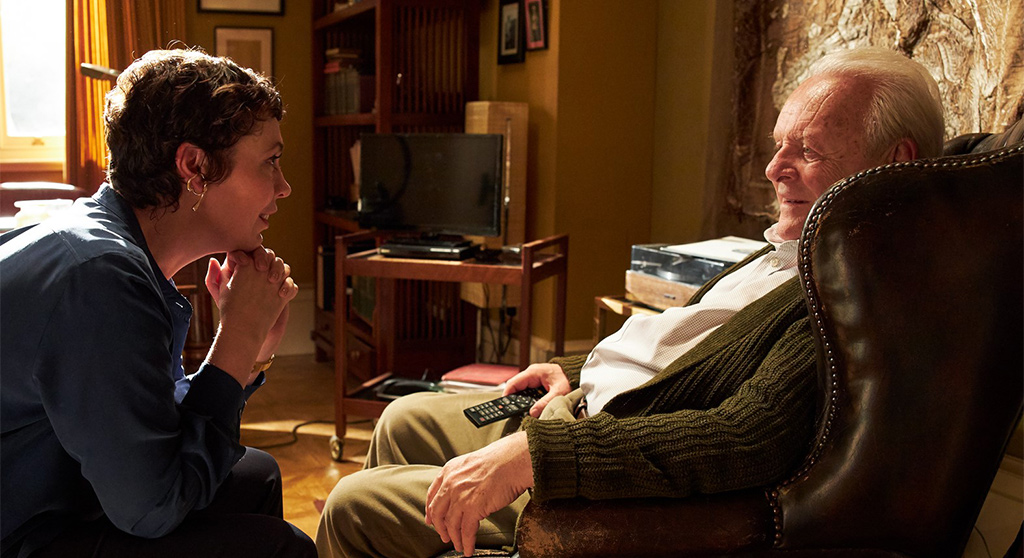 ‘The Father’: Unforgettable visit with a patriarch who increasingly can’t remember his own family

In “I Care a Lot,” the recently released Netflix film, Rosamund Pike plays an opportunistic caregiver who imprisons the elderly afflicted with dementia (getting their power of attorney and dumping them in prison-like convalescent homes) and bilks them of their life savings. It’s a slickly made film with a repugnant underbelly – I mean, how can heroes legitimately prey on the weak and infirm? “The Father” stars Anthony Hopkins in a masterclass performance as a memory-challenged senior who may have made a perfect mark for Pike, except for the fact Pike’s deceit took place in our fair Hub and “The Father” unfurls across the pond in England.

What “The Father” also has going for it is Olivia Colman as Anne, the daughter of Hopkins’ aging elder – named Anthony, of all things. Later we see Anne played by Olivia Williams, and Anne’s husband, Paul, is played by Mark Gatiss and then Rufus Sewell. So may Annes, Olivias, Pauls and Anthonys. Is this a Charlie Kaufman film, you might ask. Sure, it’s a bit of a head spin on paper, but it’s masterfully orchestrated by first-time filmmaker Florian Zeller, adapting his stage play. The rooted point of view is that of Anthony’s, so when we first glimmer Paul (Gatiss) in a room in Anthony’s flat it’s as if he’s stumbled upon a burglar – “Who are you?” he barks like a once-feared alpha dog grown long in the tooth. The whole movie proceeds this way, through the eyes of an unreliable narrator; Hopkins’ immersive portrayal helps show what it’s like to see your mental faculties dim in real time. Coleman, so fiery a Queen Anne (that name again) in “The Favourite” (2018), is somber, soulful and deeply compassionate here. It’s a perfectly subdued performance, as Anne’s life with her own growing family has been put on hold, in a sense. Her frustration is clear despite being tucked way down as she remains dutiful and supportive, first and always. Sewell’s Paul is not so restrained, allowing frustration and pain to erupt into anger.

If I had one thing to nit about “The Father” – which is ultimately an uplifting take on a dour and gut-wrenching topic – it’s that Anthony’s flat and the facilities that Anne and Paul take him to are all top-notch: the best medical care, the best people, all wonderfully nice. Having gone through this a few times and talking to others who have traveled the same painful path, the struggles in reality are much deeper and darker. Not all facilities look like ribbon-cut clinics, not everyone can afford the best care and not always can you calm the demons in someone as easily as they do on screen. Did I mention elder abuse, identity fraud and check forgery? The kind, compassionate aide Laura (Imogen Poots) is an angelic presence, one I rarely saw along the way. I don’t want to say “The Father” is a fantasy, but it’s not reality, or at least not a reality most face. It is painful and honest and brilliant and smart in its orchestration, and in the work by Hopkins and his supporting cast. The heartbreaks are there from the start, and continue right up through the bittersweet end. As with all all-too-true journeys, they ripple onward for days in small, sharp shockwaves.