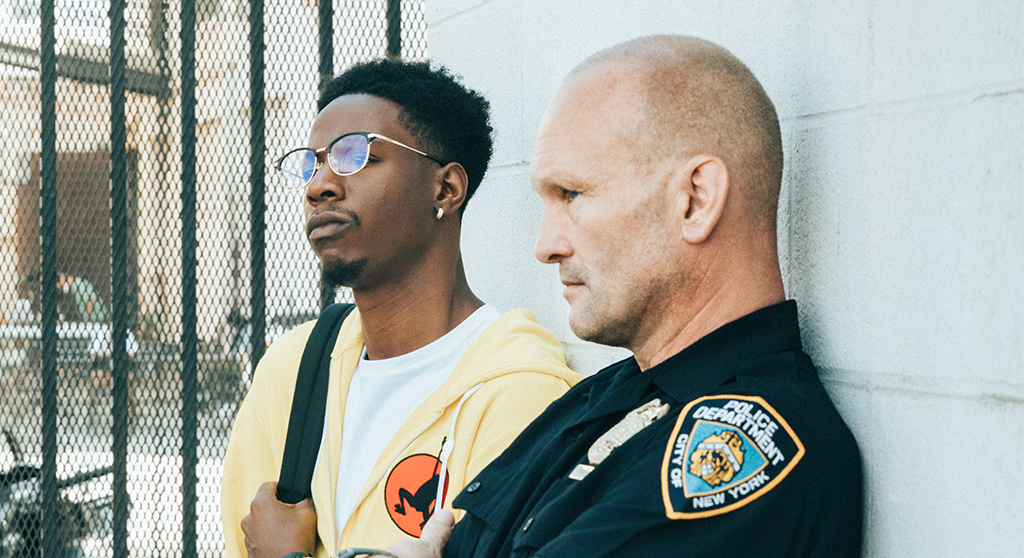 Playing through The Brattle Theatre’s virtual screening rooms are Sky Hopinka’s experimental debut feature “Maɬni – Towards the Ocean, Towards the Shore,” exploring the death myth of the Chinookan people in the Pacific Northwest, and the DocYard’s latest offering, “Shared Resources,” Jordan Lord’s film debut about debt – specifically the filmmaker’s parents’ bankruptcy and the physical and psychological repercussions of restructuring after implosion. Lord will partake in a live, virtual Q&A with DocYard curator Abby Sun on Wednesday.

A film steeped in the hate and oppression of South African apartheid of 1981, when Mandela is in still in jail, the Cold War is raging and military service is mandatory for all white males 16 and older. Oliver Hermanus’ film focuses on Nick (Kai Luke Brummer), one not as eager as his compatriots to get to the front. To get there, there’s off-the-charts brutal hazing, and about the best any enlistee can hope for is a person of color to enter the mix to draw the barbaric authoritarian ire. Nick’s real apprehension lies in his same-sex orientation, which he buries because being gay in South Africa society, let alone in the military, is almost as bad as being black. Hermanus’ spare, stark tone never fully lets us in; we feel on edge for Nick, but Hermanus hangs far too much on the cruelty from above and never opens up enough for Nick to bud. The cinematography, composition and score are majestic, yet sadly feel wasted on the two-note material. At Landmark Kendall Square Cinema, 355 Binney St., Kendall Square.

Melancholy drives this deeply intimate drama about lonely souls who fall into a relationship and struggle with mental illness, if not hide it all together. The film centers on the budding relationship between Katerina (Emilie Sofie Johannesen) and Nik (Raffaello Degruttola), immigrants from Norway and Italy working as nurses at a North London hospital. Throughout the film Nik and Katerina talk to confidants (or therapists), and their responses are always pat and subdued; just what ails either is held back from us, just as they hold back from each other, but there’s clear trouble boiling just under the surface that eventually erupts in stark and surprising ways. The film is directed in a neorealistic, documentary style by Degruttola, whose father had a bipolar affliction like depicted in the film, and the performances by Degruttola and Johannesen feel lived in and genuine. It’s hard to put a tag on “Transference,” but you have to admire its ambition in flagging mental illness in a unique way. On Amazon Prime.

A comedic riff on the superhero genre (think the recent “We Can Be Heroes”) written and directed by Ben Falcone (“The Boss”) that teams Melissa McCarthy (Falcone’s spouse) with Octavia Spencer as former BFFs turned have and have not. Spencer’s Emily Stanton has made it big in biotech; McCarthy’s Lydia Berman is more of the crassly punchy, down-on-her-luck terror we witnessed in “Bridesmaids” (2011). They both knock around Chi-town, where “miscreants” (basically family-friendly X-Men mutants) are both a terror and political concern. As far as the mayoral race is concerned, one miscreant named Laser (Pom Klementieff, “Guardians of the Galaxy”) has it out for candidate William “The King” Stevens (Bobby Cannavale). Emily decides to fight back, imbuing Lydia with super strength and her with invisibility and the taser gun from hell – they’re, wait for it, Hammer and Bingo. While the two have good comic timing and appeal, there’s nothing fresh or appealing plot-wise. It feels like a cheap knockoff, with poor Jason Bateman in the mix as the man with crustacean pincers known as The Crab. On Netflix.

A beguiling documentary about Italian gentlemen of a certain age who make a living sussing out valuable subterranean truffle fungus and selling it in a high-demand market. What’s so intriguing is the esoteric and enigmatic process of foraging in the deep woods with trained dogs and the aggressive barter process for their findings (a truffle can go for $90 to several hundreds of dollars per ounce). Most of the men profiled are in their latter years (late 80s, even), weather-worn, etched with character and characters in their own right – their dogs too. The cinematic framing by Michael Dweck and Gregory Kershaw poetically captures the diametric differences between the hillside community scanning the woods and living in humble abodes with that of the hustle and bustle of the truffle market where buyers seem to hold the upper hand and are constantly talking down the quality and price. At Landmark Kendall Square Cinema, 355 Binney St., Kendall Square.

This B-level sci-fi chiller is all dressed up in Lovecraftian garb (it feels very “Color Out of Space” like) as 16-year-old Liberty (Ema Horvath) has strange and sexually charged interactions with mom’s new, beefy ecologist beau (Trey Tucker). When we meet John Smith coming out of an Adirondack lake, it’s like Bo Derek in Blake Edward’s “10” (1979) with the camera hugging his every ab. When Liberty raises the issue that John takes a “scientific” interest in her, mom (Mena Suvari, from “American Beauty” – yes, it has come to this) waves it all off, seemingly doped up on something. The mood and atmosphere by first-time feature filmmaker Braden R. Duemmler is quite compelling and riveting, but when the red glow in the lake and the lamprey larva in the basement make their way in, let alone a few WTF continuity jumps, the eerie ride becomes bad camp. On Netflix.

This Oscar-nominated live-action short film (it’s 32 minutes) by Travon Free and Martin Desmond Roe is essentially “Groundhog Day” (1993) if you were George Floyd or Breonna Taylor. No laughing matter, and yet the film is a dark comedy in which Carter (Joey Bada$$), an amiable graphic designer, wakes up in the bed of a beautiful woman he met the night before and gets up to go home to let his dog out – but never makes it because each time he’s questioned, restrained and suffocated, or shot to death by officer Merk (Andrew Howard, who has the tang of Jason Stratham to him). The two leads are fantastic, and the film moves in smart, varying ways. At Landmark Kendall Square Cinema, 355 Binney St., Kendall Square, and on Netflix.