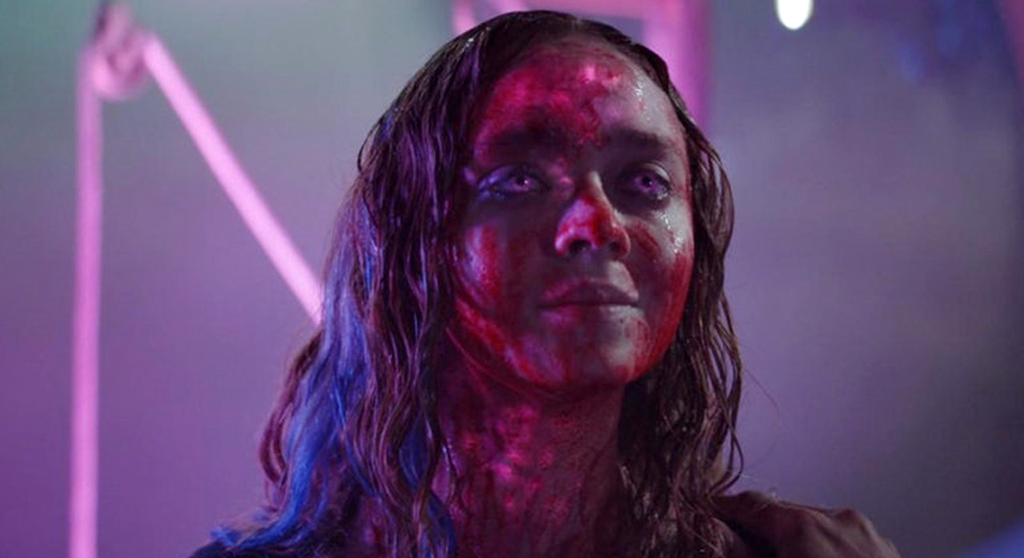 If you were tickled pink by Nicolas Cage doing his goofball gonzo best in the bloody revenge thriller “Mandy” in 2018, sharpen your knives for another foray into the freaky with some genuinely glorious hambone-gnawing moments. In this adaption of H.P. Lovecraft’s favorite story, “Colour Out of Space” – which has had several cinematic spins, including “Die, Monster, Die!” back in 1965 starring Boris Karloff – Cage plays Nathan Gardner, trying to live off the grid in the farmhouse he grew up in under the thumb of a controlling patriarch. 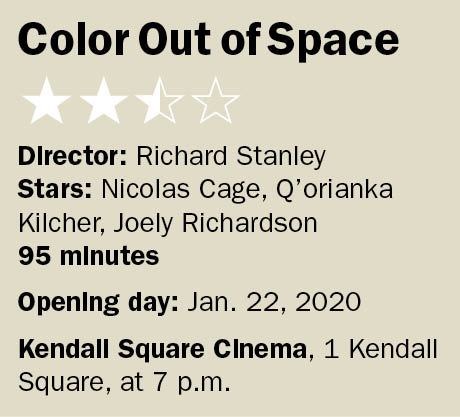 The pursuit of Eden (in the fictional town of Arkham, which Lovecraft situated in our fair state and used often in his tales, though the film’s not shot here) doesn’t last long. Nathan’s attempt at growing tomatoes isn’t going so well – he’s a Gardner who can’t garden – though his alpaca endeavor seems to be doing marginally better. Then there’s Nathan’s wife, Theresa (Joely Richardson) who’s wildly unhappy with the spotty Wi-Fi and can’t work, while their daughter Lavinia (Madeleine Arthur) practices Wiccan rituals in the woods.  Rounding out the nuclear-plus clan are big brother Benny (Brendan Meyer) who gets stoned while tending to the woolly creatures in the barn and the youngest, little Jack (Julian Hilliard), something of  mama’s boy who becomes drawn to the voices he hears in the old well out front.

Things get really weird after an electrical storm drops a meteor in the front yard. The anemic tomatoes suddenly grow plump and large – but taste like crap – while fuchsia mushrooms crop up and a large technicolor dragonfly bemuses Jack. It’s all a wonderment, until the dog goes missing and mom goes into a hypnotic trance while paring vegetables in the pantry – the scene is the edgiest moment in the film and one that’ll have you wincing before anything goes wrong. Turns out the meteor’s an alien invasion of sorts that’s transported a “color” here to contaminate the water supply, mutating/possessing those who quaff it. Watching Nathan pull a clingy jellyfish creature from the shower drain will give you as many second thoughts about entering the bathroom as “Psycho” (1960) did.

Things work their way into John Carpenter’s “The Thing” (1982) territory. Tommy Chong pops up as the tripped-out hippie down the lane and the small-town cops are late to the game as Cage’s Nathan starts to do his very best Jack Torrance. You want to say you’ve seen it all before, but you have to remember Lovecraft was a contemporary of H.G. Wells, penning tales of the outré long before Stephen King was in diapers or John W. Campbell cooked up “Who Goes There?” (the basis for “The Thing”). The film also marks something of a comeback for director Richard Stanley, who, after coming to notoriety for his 1990 “Terminator”-esque thriller “Hardware” had a nasty fall when given a chance to helm a passion project, “The Island of Doctor Moreau” in the mid-90s. Yes, the one based on Wells’ book and starring Brando and Val Kilmer – and from which he was fired and replaced a week or so into principal photography, after a litany of production problems (forming a rich narrative in its own right). Since then Stanley made a series of documentaries, including “The White Darkness” (2002) about voodoo and, more recently, returned to genre with a segment of the horror anthology “The Theatre Bizarre” (2013). “Color Out of Space” sets Stanley comfortably back where he started. The film looks far more polished than its modest $6 million budget. It’s not fully consistent or narratively clear, but it is a ghoulish pleasure to see Cage ditch his ho-hum dad and dive into the lunatic fringe.