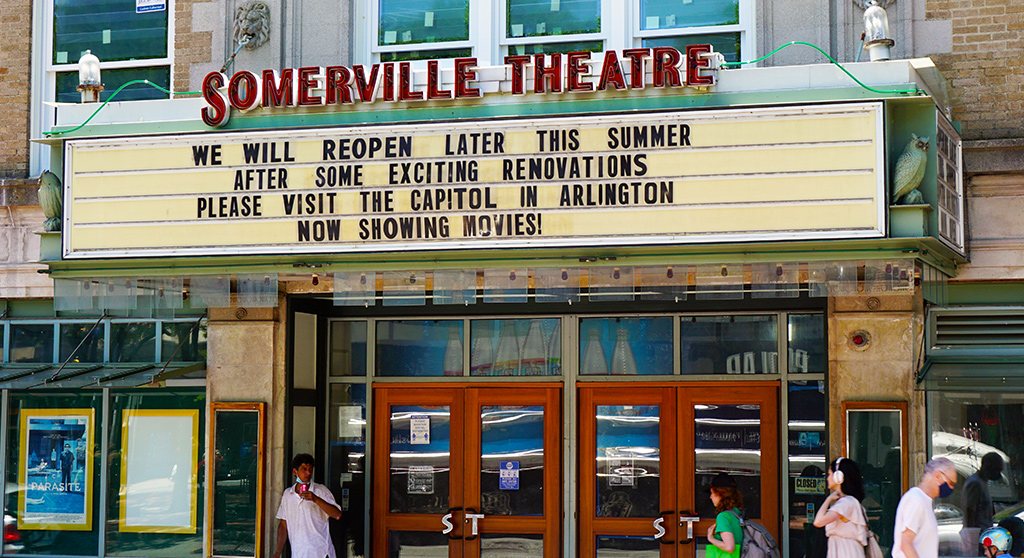 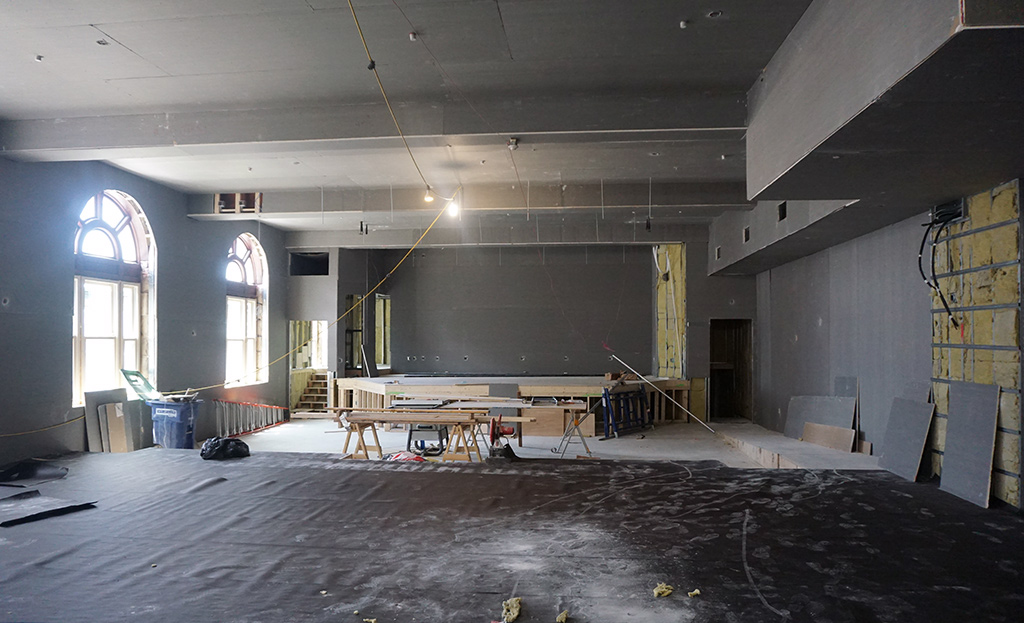 Frame One is building the Crystal Ballroom at Somerville Theatre in Davis Square. (Photo: Tom Meek)

The pandemic had its own victims in the film business, with the ShowPlace Icon and the ArcLight – luxe theaters that opened just before the pandemic in the Boston area – shuttered for good. On the upside, the Coolidge Corner Theatre just announced an expansion that includes two new screening rooms and a community space, and all Cambridge theaters have reopened or are about to. So what’s going on with the Somerville Theatre in Davis Square? The Capitol Theatre in Arlington, also owned and run by Frame One Theatres, has been up and running for a few weeks, but the Somerville cine, host to screenings and live performances since 1914, remains ominously dark.

“We’re undergoing renovations and a changeover,” theater manager and newly minted creative director Ian Judge said during a recent visit to the iconic structure. The lobby is in the middle of a refurbishing; the bar is now set back, and the concession and merchandise area has been expanded. That far too “homey” bathroom just off the lobby is getting a much needed makeover. The biggest change is upstairs, where two movie houses are being returned to their original ballroom format. 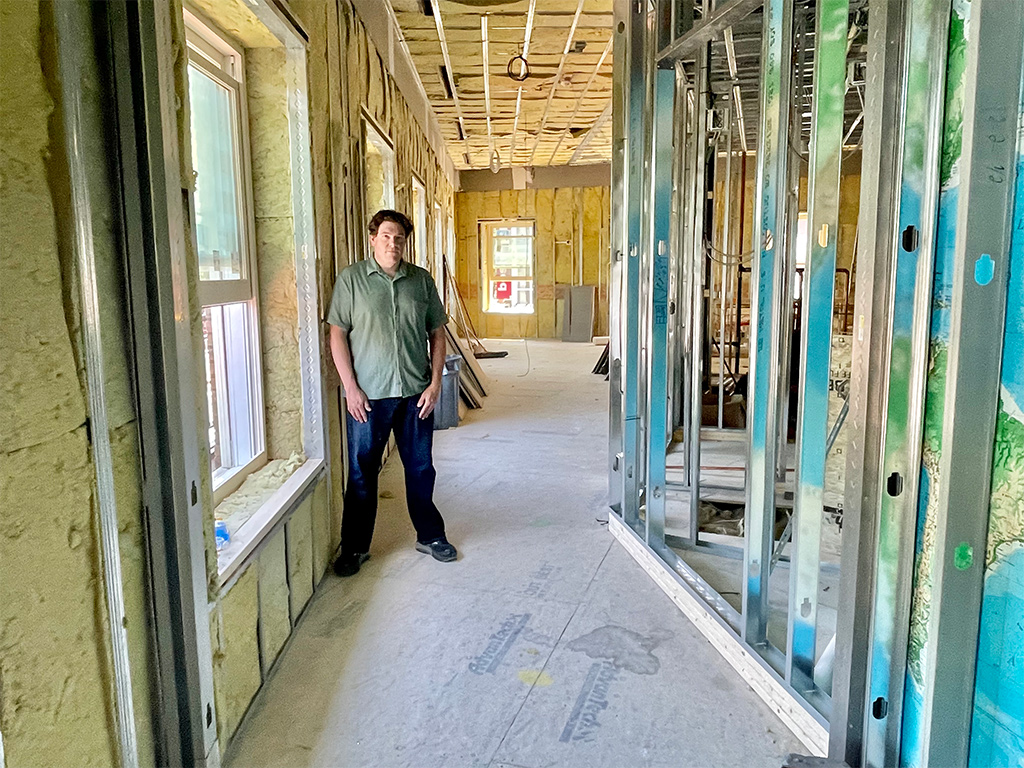 What that means is that the theater will now host a nearly 500-person-capacity performance hall dedicated to live music, special events and private engagements such as weddings and corporate gatherings. “We had remodeled the downstairs theaters and knew we had to do something with the upstairs,” Judge said. With the pandemic and six screens in Arlington (and potentially two more coming in Harvard Square), Frame One decided it could fill different needs.

The new/old hall has an airy amphitheater-like vibe and a space that could be turned into a cozy bar in the back, with a coatroom to boot. Judge said the room could also be used for special screenings, which is good news for Independent Film Festival Boston, but likely never would be opened as just a public bar. (“I could see us doing something like trivia nights,” Judge said.) The main focus will be booking music acts, something Davis Square has lagged in since the amps went silent at Johnny D’s back in 2016. The space, which was known as the Hobbs Crystal Ballroom back in the day – it’s in the Hobbs Building – will now be the Crystal Ballroom at Somerville Theatre. Its capacity will be far greater than the 300-plus that Johnny D’s seated, just short of the 525-person hall The Sinclair offers in Harvard Square. The main downstairs theater, which has a capacity of almost 900, will continue its mixed-use operation as a cinema and live performance venue. The new configuration will have two entrances for each space. 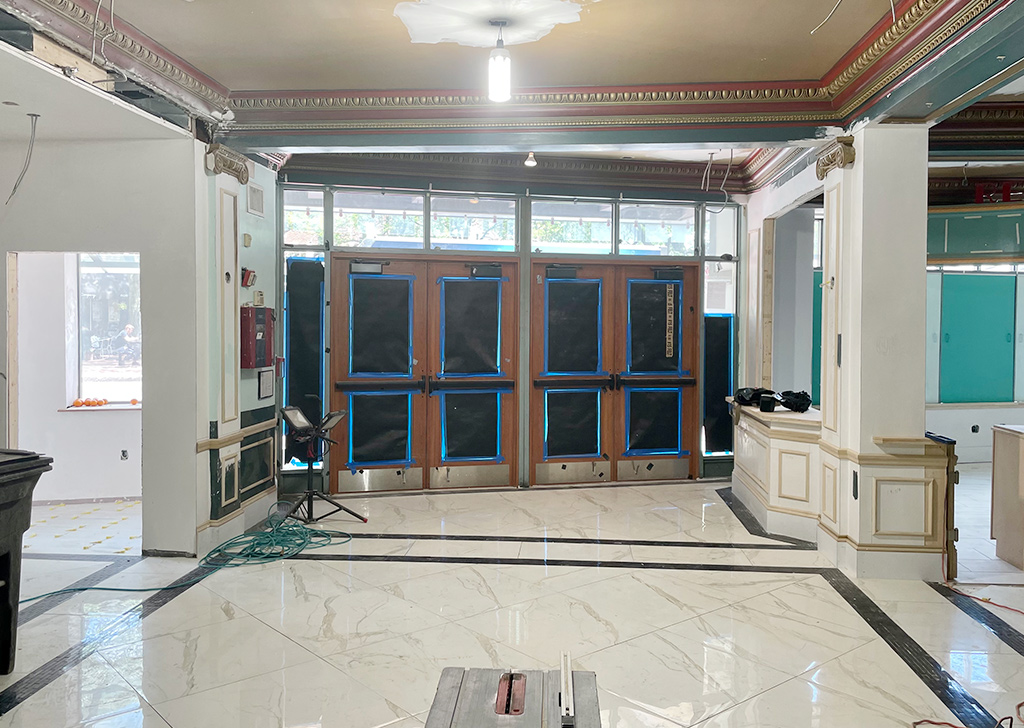 The Somerville Theatre lobby is getting a touchup as well. (Photo: Tom Meek)

Judge, who had been furloughed for a year, will oversee the cinema and the new ballroom, while longtime staffer Peter Mattchen will take on day-to-day general manager duties. The Crystal Ballroom is expected to open in the early fall; opening for the three movie screens should be mid- to late summer with, Judge said, a new ability to show 4K films and a re-honed focus on 70mm exhibition; the Somerville and Coolidge are two of few theaters in the United States equipped to exhibit the classic, grand format. Frame One’s involvement in a plan for two Harvard Square movie houses (replacing a cinema that went dark in 2012) continues, though the project is stalled.