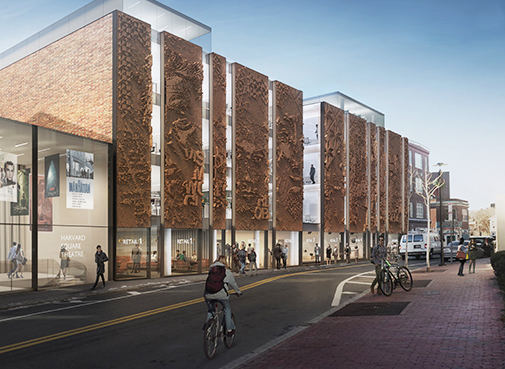 Retail and office uses will be added on Church Street, Chan says
By John Hawkinson

Renderings show the proposed design for a renewed cinema and retail complex on Church Street in Harvard Square.

The Harvard Square Theatre at 10 Church St. will be redeveloped into a mixed-use, 60,000-square-foot building with two lower-level movie screens; street retail; and five stories of office space above, it was announced this morning. 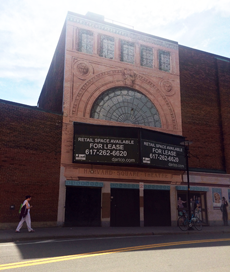 Billionaire investor and owner Gerald Chan and his team presented initial plans to revitalize the years-vacant property, which has been empty since AMC shut down its screens and moved out in 2012. The presentation came at a private meeting of Harvard Square neighbors and city officials, and was met with acclaim.

Chan has been under fire for some time about the vacant site, with the City Council pushing for answers about his plans and proposing potential penalties for vacant properties. Nearby restaurants on Church Street have suffered after the theater shut its doors, including the closing of nearby restaurant Fire + Ice last year.

The lead architects for the building are Paulo Martins Barata and Luis Teixeira of Promontorio, based in Lisbon, Portugal. They are joined by local architect Elizabeth Whittaker, founder of Merge Architects; Whittaker is also a professor in practice at Harvard’s Graduate School of Design. 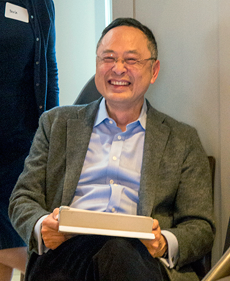 Chan introduced his staff, led by attorney and former Cambridge mayor Anthony Galluccio, and emphasized his delegation to the team: “They’re going to tell you about it: I don’t know about details and stuff, but it’s going to be good!”

“I love it! I think it’s great!” said city councillor Jan Devereux, who leads the council’s economic development committee and has been particularly concerned with development in Harvard Square.

“Gerald Chan has clearly heard the council’s and the community’s concerns,” councillor Leland Cheung said. “I’m delighted to congratulate him and his team on finding a way to deliver exactly what I’ve been championing on behalf of residents – a theater/retail plan that will activate the street, bring thousands of shoppers to Harvard Square and provide a venue for families to enjoy.”

It was Cheung who had called Chan’s slow process “like a cancer on Harvard Square.”

Suzanne Blier, a Harvard professor who has been active in Harvard Square preservation and critical of a separate proposal to remake the Abbot building a block over, praised the project: “This is stunning. The design is fabulous. It shows what you can do with real planning going forward. I’m really excited.” 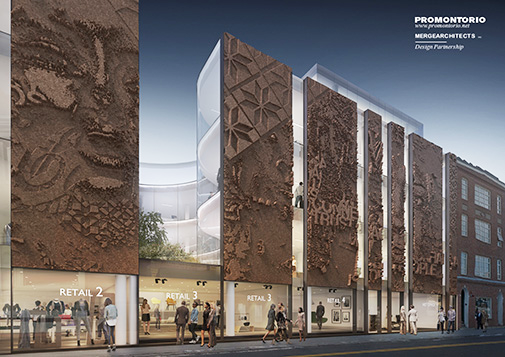 An architect’s rendering shows ground-floor retail and peeks through to a courtyard at the level of the second floor.

Barata, the project architect, said the complexity of Cambridge is “so similar in so many ways to the European problems of the city,” and noted that the project is boxed in by a Harvard office building above Club Passim on Palmer Street and buildings along Massachusetts Avenue – neither of which are part of the project, and are under different ownership.

The building is proposed to be 68 feet in height, with a circular “cutout” – a glazed second-floor courtyard that offices will look out onto and will let in light. Because the proposed height is between 60 and 80 feet, a Planning Board special permit will be required.

The building’s Church Street façade is intended to be textured with significant artwork – “a wall that becomes a canvas of the memory of the place” – and will be broken up by nine vertical window slits, plus the courtyard cutout. The window system is intended to echo the pilasters of the theater. Barata suggested that the material might be a mixture of cork, which is native to Portugal, and cement. The artist has not yet been identified.

The two theaters would collectively seat about 300 people, and would be accessed through a lobby and concession area, all below ground, reached by a large spiral staircase and elevator.

Renderings show a ground-floor theater office and entrance and space for three or four retail tenants.

The proposal’s top two floors of office space would be set back from the rest of the building, and have glass windows along their span.

Because the existing building is in the Harvard Square Conservation District, demolition of the existing building will require approval of the Cambridge Historical Commission. But Charles M. Sullivan, executive director of the commission, said he did not think the building exhibited significant exterior architecture worth preserving. Sullivan said the commission would look carefully at the proposed replacement; it is charged with finding the replacement to be “appropriate for or compatible with the preservation or protection of the district.”

The Planning Board will also review the project for its height and square footage.

“I think the programming’s pretty good. I think the courtyard is a brilliant idea” said Hugh Russell, a member of the board who attended the presentation.” 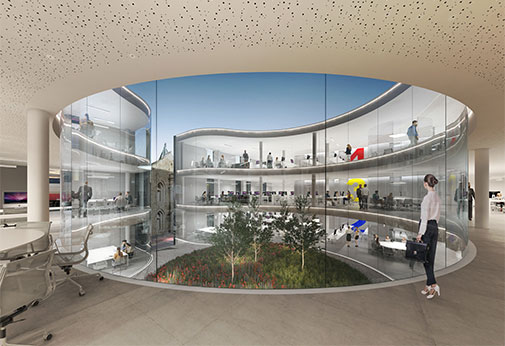 Offices look onto a courtyard in the building proposed for 10 Church St.

The movie theater will be operated by Richard Fraiman, who owns and operates the Somerville Theatre in Davis Square and the Capitol Theatre in Arlington. The team anticipates showing modern blockbusters as well as classic and independent films. The below-grade screens will use around 15 percent of the area of the building, supported by concessions, beer and wine, and “some food,” Galluccio said. “So it really becomes a night out.”

“Two screens of those sizes are very needed in Cambridge,” said Ned Hinkle, creative director at The Brattle Theatre down the street. “We certainly welcome new blood and new activity in our area, as well as all over Boston. … Ultimately, more is more when it comes to people being able to see movies the way they were meant to be seen, and not streamed on their computers. We look forward to working with them.”

Galluccio also praised the city’s recent zoning change to increase flexible use of basements by relaxing density restrictions on that space, saying “that’s a catalyst that helps make this work.”