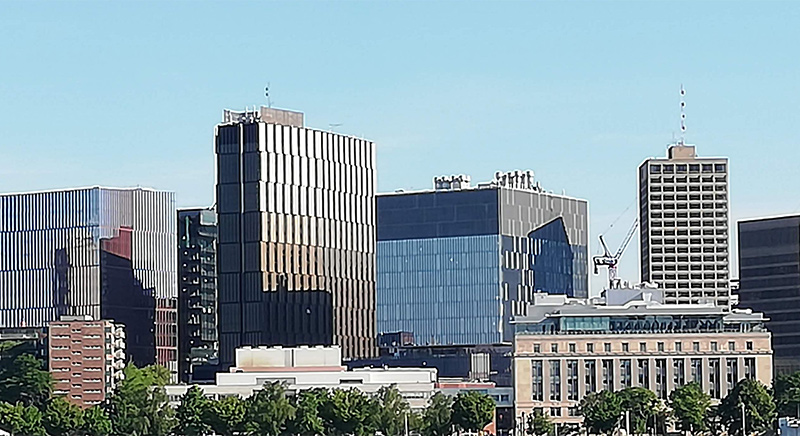 This isn’t Manhattan. It’s the Cambridge skyline as seen from The Esplanade in Boston. (Photo: Philip Sego)

In the 1970s, America was in the midst of an economic downturn. Municipal tax revenues were falling, as was personal income. Unemployment was increasing. The inflation rate was nearing an all-time high. Cities and towns struggled to pay for essential municipal services such as teachers, police, fire protection and trash pickup.

Throughout the United States, local governments began to increase taxes to make up for this shortfall. This led to a backlash from cash-strapped homeowners. In California in 1978, a tax revolt took hold in which voters passed a landmark law that severely limited the ability for municipalities to raise taxes. Dubbed “Prop 13,” it passed by a nearly 2-to-1 margin.

In Massachusetts, leaders in the anti-tax effort created “Proposition 2½,” modeled on California’s tax-cutting measure. Proposition 2½ was created by the Citizens for Limited Taxation, a conservative group headed by crusader Barbara Anderson. It promoted smaller government and fewer regulations. This law was ultimately passed by Massachusetts voters 56 percent to 40 percent.

Since the inflation rate was between 6 percent and 12 percent immediately after passage of Prop 2½, the state’s communities were reeling. With lowered tax revenues, many city services were cut, libraries were closed, teachers were fired and playgrounds and parks deteriorated. The only way a municipality could stay afloat was to curtail spending on expected and essential services.

As the situation became more dire, municipalities latched onto a loophole: increasing property taxes on new construction. To keep city services running and to keep up with inflation, the only option was to encourage new construction that could generate high revenue every year.

Cambridge was well-positioned for development. The city had recently upzoned – changing its zoning to encourage denser development. The eastern part of the city, including Kendall Square, Lechmere and North Point, were largely abandoned properties and brownfield. Being almost next to downtown Boston and on the green and red subway lines, these locations were highly desirable. The Alewife area was also largely undeveloped. There were pockets of former industrial zones in Cambridgeport. A large number of residential properties throughout the city had significant “headroom” (the difference between what was allowed by zoning and what had been built).

In 1995, Cambridge lost rent control through an effort led by, among others, Denise Jillson, the current executive director of the Harvard Square Business Association. It’s estimated that more than 15,000 residents were forced to leave their homes as rents skyrocketed. Property owners began converting former rental properties to condos that could sell at high prices. A “townhouse” ordinance allowing denser zoning started creating tear-downs and infill buildings. The destabilization of the surrounding neighborhoods that had begun after Prop 2½ had burst onto the residents.

Under the reign of former city manager Robert W. Healy, the city concentrated on creating a steady stream of new construction, filling the city’s coffers with new tax revenues exempt from Prop 2½ limitations. At the same time, city salaries of top administrators were increasing, requiring larger budgets. To maintain these larger budgets, the city needed a constant and reliable flow of new construction. And since commercial construction was taxed at approximately double the rate of residential construction, the city looked at building more dense tall buildings.

Citizen groups began to push back. As a result of increasing traffic, the city’s air quality had been worsening steadily. The city had been disregarding an order by the Environmental Protection Agency that banned new commercial parking garages, approving multiple garages. A neighborhood group, the Cambridge Citizens for Livable Neighborhoods, filed suit and forced the city to comply.

Other communities, from Alewife to East Cambridge, began to push back against the onslaught of construction and destabilization. But with the enormous financial incentive and the city manager’s control of boards and commissions, the battles were typically lost. Although a few members of the City Council objected to the rampant development, they too were drowned out by the tidal wave of money and the inherent weakness of Cambridge’s “Plan E” form of government. Many councillors cozied up to the developers, knowing that with proportional representation voting, their chances of reelection actually increased by using municipal money to bring their constituents new schools, nice parks, senior centers, youth centers and programs, a new library, and the other trappings a wealthy city can buy.

In an ominous warning, in 2014, a past director of the Community Development Department was asked what the city would do when Lechmere, Kendall, North Point, “Simplex” and Alewife were fully developed: “We’ll start redeveloping.” This means upzoning an area, tearing down what’s there, and building something bigger and denser. And if anyone is paying attention to new building throughout Cambridge, it is clear that “redevelopment” is happening now. Throughout the city, backyards are being filled with multi-unit condos; a new tower was built at Massachusetts Avenue and Main Street. Another tower is planned for The Middle East site. The list goes on.

Developers make stunningly large profits in Cambridge. They have created a message that the only way to bring down the cost of housing is to create more of it, as if it followed the laws of supply and demand like eggs or milk. The obvious flaw in this is that demand is, for all intents and purposes, infinite, while the city’s infrastructure can carry about 120,000 – close to our current population.

It has been estimated that 1 million people wish to call Cambridge their home (and far more wish to live in the Boston metro area), though that’s open to debate: That estimate, done years ago by the Cambridge Citizens for Livable Neighborhoods, is based on an insatiable, overheated real estate market. With an average annual increase in home values of 8 percent to 12 percent, buying property in Cambridge has attracted buyers from around the globe, and bank interest rates hovering at less than 1 percent and a doubling of the world’s money supply in the past decade has placed enormous property speculation pressure on the entire Boston area. What’s driving the market is outside investors and real estate investment trusts, yet the trusts don’t even need to rent out the properties they buy or build; just owning them yields a handsome return on investment.

While there may be a few zoning “activists” who believe zoning is simply bad, and that the city should not have limits of height or density, it’s important to remember that not long ago, slaughterhouses clustered around Gore Street were built by a residential area because there was no zoning. Tanners dumped carcinogens, glass companies belched coal ash tainted with lead, arsenic and other toxins and the city’s less affluent neighborhoods suffered from pollutants and waste. Anyone who had lived near a restaurant or bar learned that zoning restrictions protect residents. Zoning also sets the character of a community. People who wish to live in a condo with restaurants and bars nearby have zones that allow this; others who wish a small yard for their children can have that. This isn’t “exclusionary” – it’s setting aside some areas with different characteristics and protecting all residents regardless of their economic status.

There are good arguments for development. Providing affordable housing can be a good reason. Zoning variances that allow an increase in affordable units, especially near transportation hubs, can be a very important tool. Unfortunately, this is too often subverted by greedy developers who push for an enormous zoning increases by throwing in a few affordable units. But common sense tells us that building a tower with dozens of condos selling for $2 million and a few affordable units does not contribute to a diverse city.

There are numerous problems with the haphazard, unbridled growth Cambridge encourages. Besides the obvious problems of traffic, exceeding the capacity of the T, city services and existing utilities and increasing pollution, the greatest problem that cannot be avoided is climate change. Much of the city is already prone to flooding, and the eastern third is built largely on landfill – much of it merely 7 feet above sea level. A storm surge will soon inundate a portion of the city. The areas directly by the river are likely to become uninhabitable by the end of this century.

The addiction to growth is also short-sighted because infrastructure isn’t exactly scalable – utilities will need to be replaced, not simply expanded. Streets that handle 1,000 cars a day can’t simply handle double or triple the volume. Schools, fire protection and police will all need new facilities. One could argue that the city needed a new police station and a new water facility. But the question isn’t whether we need these; the question is why: It’s like a Ponzi scheme in which we need to rebuild infrastructure because our population is increasing because we want more development to pay for more infrastructure – with no end in sight.

When will it be enough? How many people should we have? Who has the right to answer this critical question? Right now, it is the developer’s voice that prevails, supported by the city’s insatiable appetite for more tax revenue and protection of a meaningless bond rating.

Proposition 2½ created a loophole that demands continued development to support an ever-expanding city budget. It is time for a serious conversation about salaries in our city, a reasonable and sustainable budget, and a vision for how large we want Cambridge to be. It should be led by Cambridge citizens, and not by developers.

Phil Sego is a resident of Norfolk Street and the author of numerous zoning petitions.