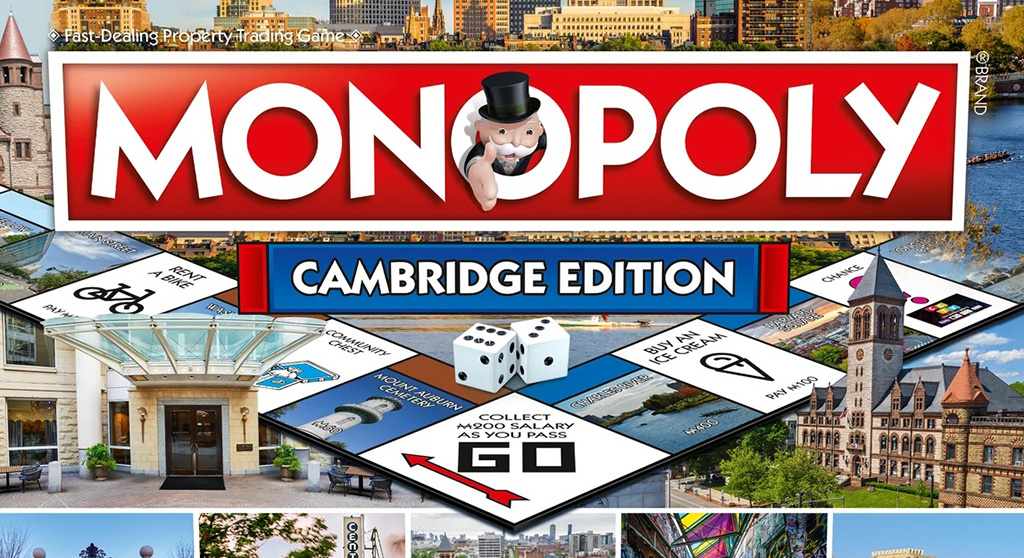 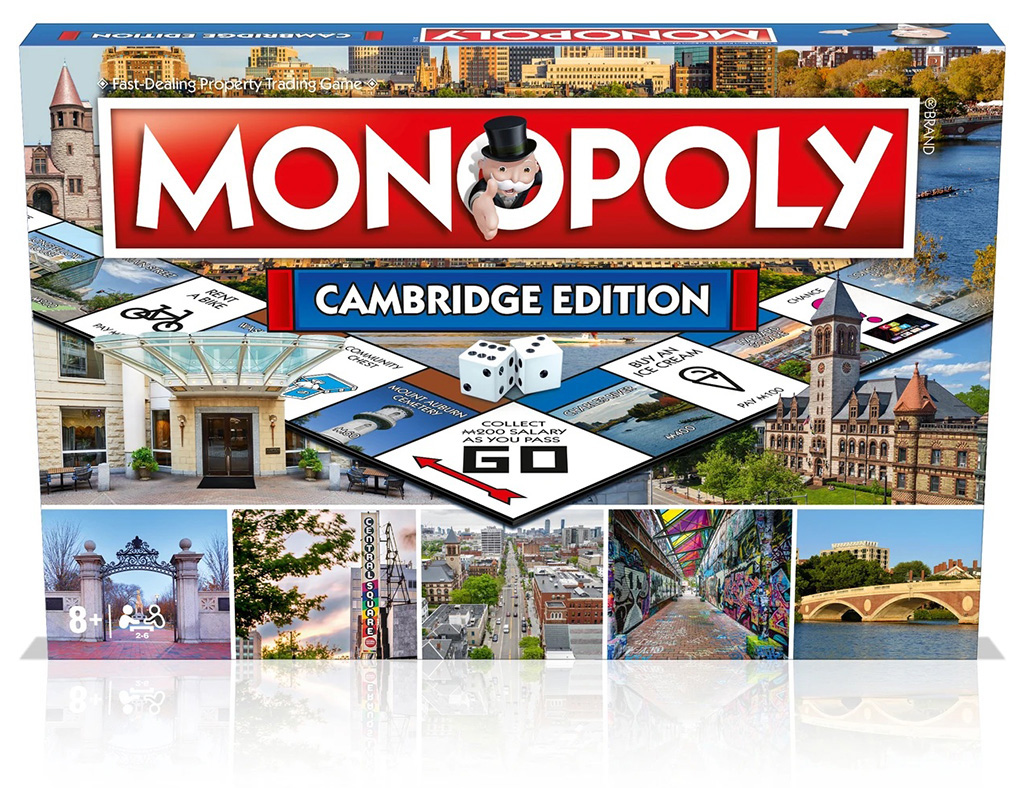 The Cambridge version of Monopoly was released in November by Top Trumps USA.

Home to plumbers and philosophers, geneticists and custodians, descendants of long-ago immigrants and new residents, Cambridge risks sacrificing diversity and history to profit-driven development. We face a polarizing challenge pitting out-of-town investors against long-term conservation and sustainability efforts. The classic board game Monopoly was patented back in 1935, but the Cambridge version – yes, it exists – makes special sense today.

“OWN IT ALL!” screams the headline on the Monopoly game box. Kendall Square, Longfellow House, even City Hall and the Charles River are up for grabs. For those fighting out-of-control development it looks like a nightmare with a pair of dice. To those pushing to “build, baby, build,” it’s a dream come true. Often this is accompanied by pushback on long-standing building preservation efforts, conservation districts and environmental drives to safeguard mature trees and open spaces.

As one of the most densely populated cities in the United States, Cambridge doesn’t have many open lots to build on. Proposals such as the now sidelined, misnamed “Missing Middle” zoning petition promised to open the floodgates to larger and higher buildings where double- and triple-deckers now stand. Current tenants would be hard pressed to make a down payment or pay rent in the new luxury housing.

Advocates of building “a bigger Cambridge” want to go further, loosening zoning rules so investors and developers can simply build more. All homes, single-family and multi-unit alike, could be scooped up by the highest bidder, torn down and replaced by much larger, much more profitable buildings. Some additional units would be created but would go to those able to pay sky-high market-rates.

Most of us look back with horror on the days massive bulldozing of neighborhoods was admired. Even in Massachusetts, it was government that condemned neighborhoods such as Boston’s West End and the hundreds of homes in Roxbury razed for the never-built Inner Belt highway. Now it’s the private sector that puts a bullseye on homes in hot markets. Outside of enacting sensible tenant protection laws, how can city governments help residents stay in their housing? How can we promote smart growth that adds homes without overwhelming neighborhoods? How can we stop this real-life Monopoly game in our cities?

Cambridge Citizens Coalition leaders support ending exclusive single-family zoning districts in our city. Cambridge has one of the lowest percentages of single-family homes among American cities at just 7.2 percent. Making it possible to create units within existing homes is a smart way forward. CCC also endorses an areawide approach to housing, transportation, parking and infrastructure for our largest employers. These issues are addressed in an Advancing Housing Affordability zoning petition recently taken up by City Council.

Constructive zoning changes cannot do everything, but they will help especially when coupled with other policy changes: adding more affordable housing transparency and oversight, and more support for renters; employing the U.S. Housing and Urban Development’s Affirmatively Furthering Fair Housing program; and a plan to mitigate heat islands and flooding impacts. 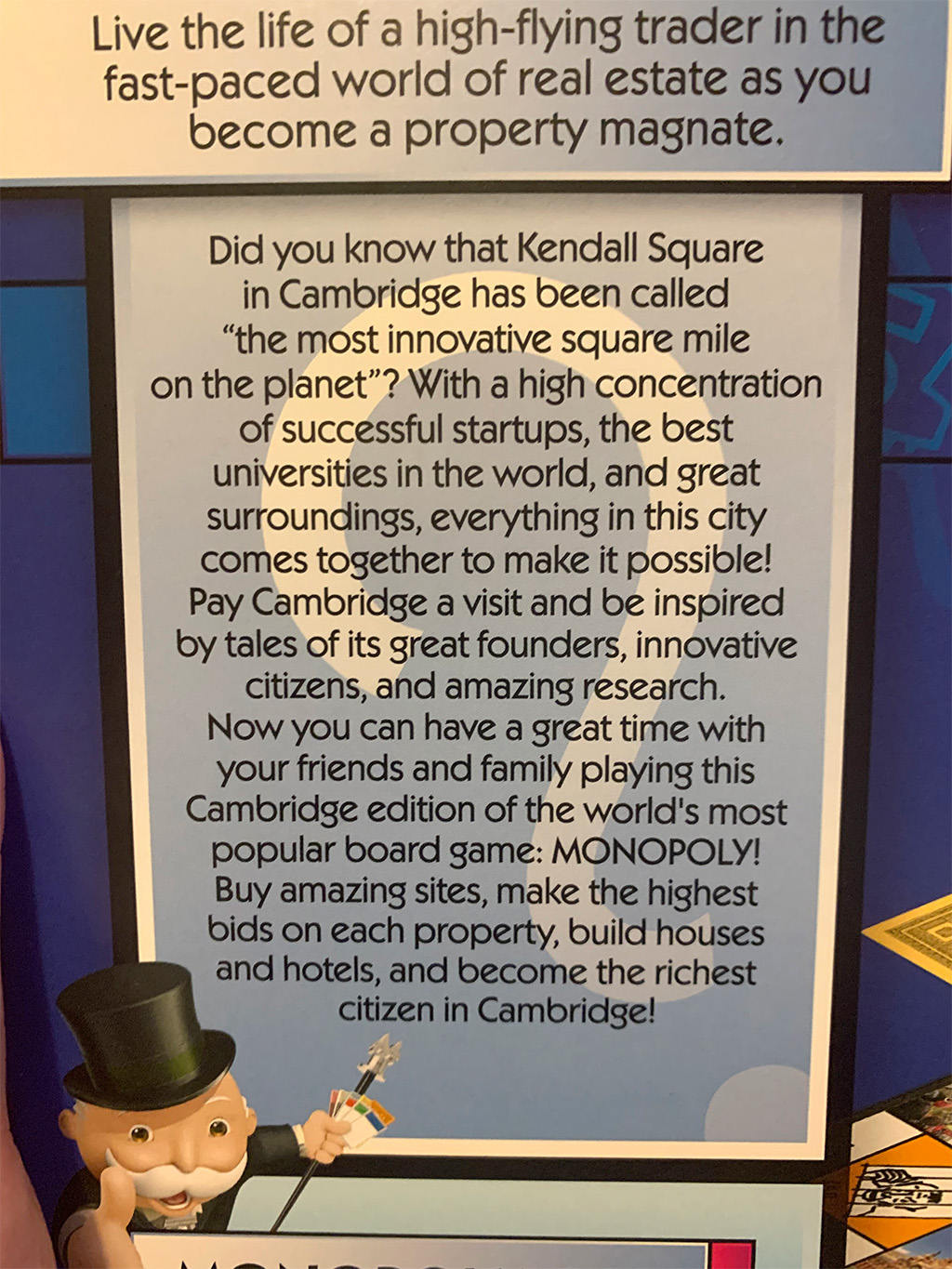 Some developers and their friends say that demolishing our long-sustainable historic homes and cutting down our mature trees is sound environmental policy. It is not. It is greed that fuels this kind of disregard for green space in an already tightly packed city and shows a lack of concern for the well-being of all Cantabrigians.

One issue to address in Monopoly game terms is a petition before the Ordinance Committee on Wednesday to greatly restrict citywide architectural preservation efforts and neighborhood conservation districts. This petition, which clearly oversteps state law and city ordinance, is a reaction to preservation efforts in East Cambridge, one of the hottest development areas, and indeed global markets. If approved, this petition would make new NCDs harder to create and put current ones at risk, removing professional requirements for committee members. In the end, who benefits from these proposed changes? Not current residents – homeowners or renters – but rather those seeking to rush the process such as investors and developers who have no reason to work with their neighbors on compatible design. While the Cambridge Citizens Coalition strongly supports architectural change, building new structures and repurposing old ones, we believe that good design is critical in a dense and deeply historical city such as ours.

The basic rule of Monopoly is to build as much as you can on as many properties as possible. Again, the box says it all: “Buy amazing sites, make the highest bid on each property, build houses and hotels, and become the richest citizen of Cambridge!” For many, that’s a threat, not a promise. It’s time to put sanity back into our public policy and rein in the forces that have turned our city into a real-life board game that celebrates profit over community.