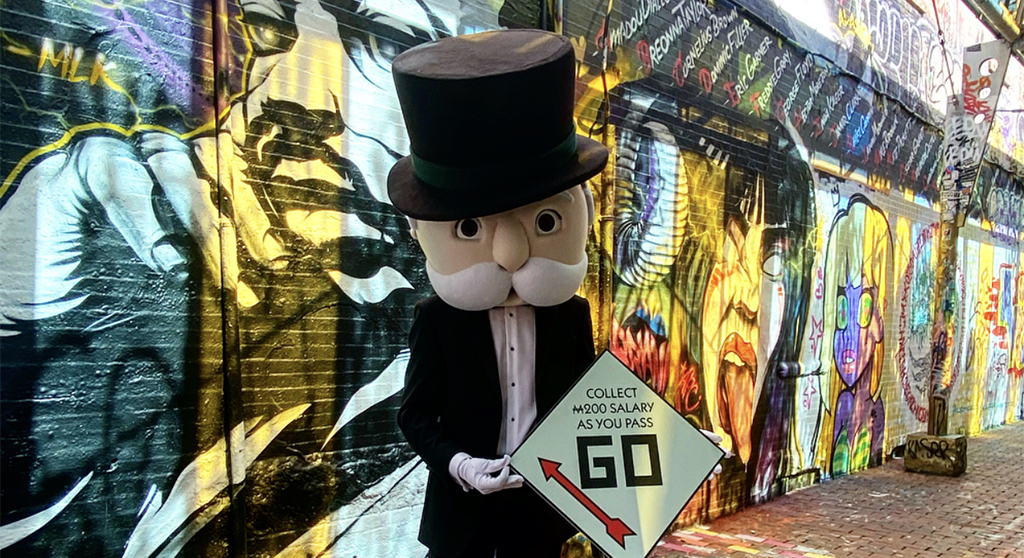 And felt right at home.
By Marc Levy 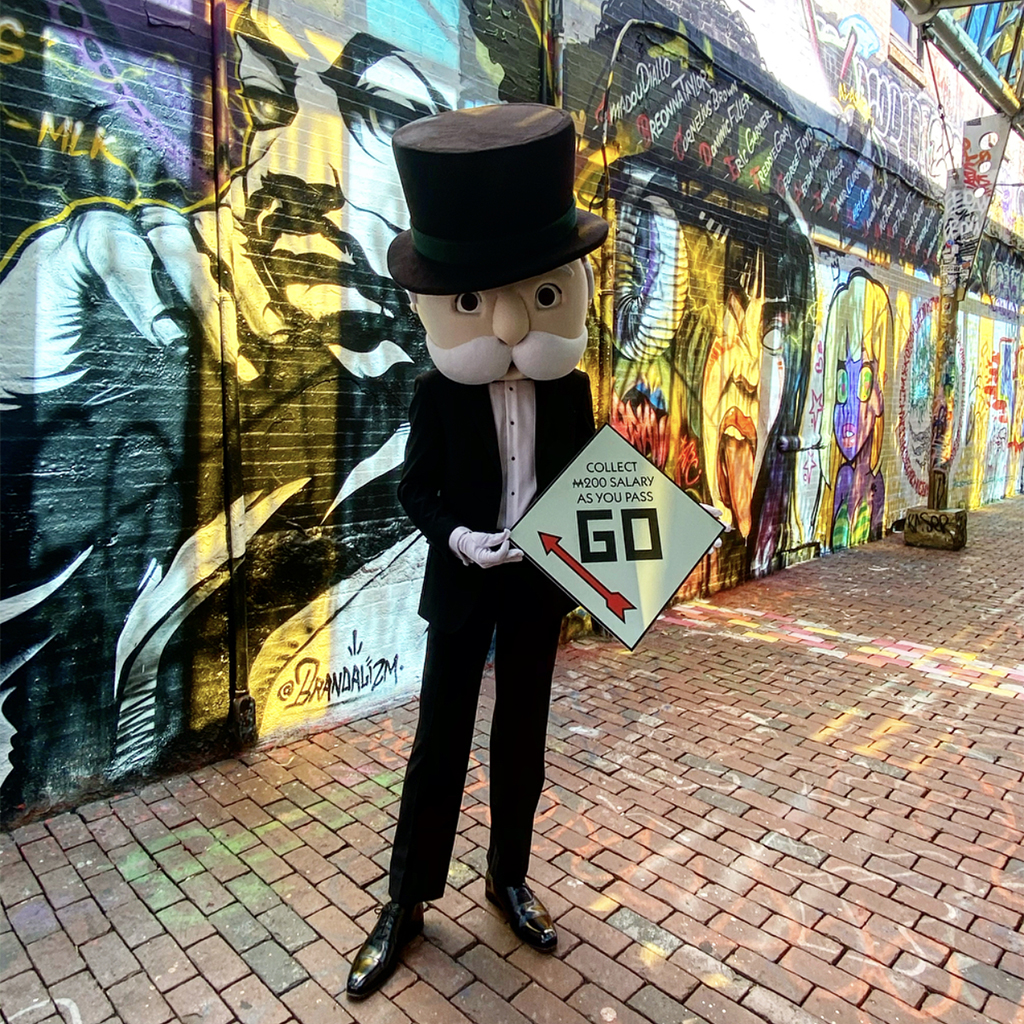 Mr. Monopoly came to Cambridge on Wednesday for a publicity stunt: Visiting and posing in his tux and giant, mustachioed plutocrat’s bobblehead in some city landmarks – including at City Hall with Mayor Sumbul Siddiqui – to call attention to the fact a customized Cambridge edition of the game will be for sale by November. Suggestions for local place names, taken until October, will replace traditional stops on the board such as Marvin Gardens.

People and institutions are playing along. Under the #CambridgeMonopoly hashtag on Twitter, Club Passim and the Hong Kong are lobbying for spaces; residents are proposing the original Legal Sea Foods spot in Inman Square, and “MIT as Boardwalk and Harvard as Park Place.”

It’s all in good fun, I guess, and it’s an honor, of sorts, that this is the “first time ever [that] locals are asked to engage and help design the board,” in the words of the event publicists.

“This edition will bring residents and nonresidents together in exploring Cambridge’s beautiful, diverse and rich history, all while playing this iconic game,” Siddiqui said in a press release, giving as wholesome an excuse as possible for this happening: “Since we are all spending more time with our loved ones during this time, this game will bring fun and history home for all to enjoy. This is for the people of Cambridge and a celebration of all we’ve been and our dreams to come.”

If only there weren’t so many layers to this. If only this weren’t so fundamentally gross.

Monopoly began as something vaguely socialist called “the Landlord’s Game” in 1903, invented by a woman named Elizabeth Magie as “a practical demonstration of the present system of land-grabbing with all its usual outcomes and consequences” – but Magie created a second set of rules for fun in which one person got rich and the other players got crushed. Then Magie got crushed by a man who stole credit and got rich off her work. Now we all know Monopoly as a game of crushing other players by gobbling up real estate, developing the land, collecting cash and charging others rent to squeeze them into bankruptcy. It is a celebration of wealth and cruelty, if not a how-to, in a country that has all but given up on the codified notion that individuals or their corporations shouldn’t have a monopoly on anything.

And soon we’ll have an edition set in Cambridge, where surging real estate prices and rents leave many residents scrambling annually for a way to stay in the same city as Club Passim and the Hong Kong, MIT and Harvard – what a delightful reminder to take with us as we’re squeezed out to Somerville, and then Medford, and then Malden. (Let’s not even think too much about the fact that the manufacturer of the official Cambridge version of Monopoly under license from Hasbro is a company called Top Trumps.)

“We want to ensure that Cambridge Monopoly is an accurate portrayal of what locals love about the city,” says Top Trumps’ George Shrimpton.

But much of what people love about Cambridge is disappearing as quickly as they might be suggested for a space on the board, and not just because of economic pressures from a coronavirus lockdown. From Cafe Pamplona and the Grolier poetry bookshop to The Middle East and [email protected], much of what’s special about the city exists in squares where hotels are going up and rents with them; and homes are wiped off the board and replaced by bigger structures that demand bigger payouts every time you make it around.

It’s such a painfully obvious parallel that it doesn’t even amount to metaphor: Cambridge Monopoly is a real estate game of winners and losers, and there are a lot more losers. Cambridge Monopoly isn’t much in the popularized, mythologized spirit of Cambridge, though it’s perfectly in keeping with the grotesquely plodding nature of, say, taking the EMF music community – a thing that “locals love about the city” – and turning it into a literal facade of itself for the sake of having more upscale office space. On the next round, look for it to happen to The Middle East’s restaurants and clubs. Yet both could be enshrined forever on a Cambridge Monopoly board to represent a “diverse and rich history” full of places that can be visited only there, and only in the form of such game pieces as a top hat … or the boot.

Cambridge Monopoly is a game that isn’t a game, and enjoying winning it means you’ve taken the wrong lesson from it – like glorifying the anarchy of Tyler Durden or hoping Walter White gets away after all the drug dealing. In this case, it was the personification of a robber baron in formalwear that came to town Wednesday, prancing cutely from the Charles River to Graffiti Alley with the message that Monopoly is all in good fun, and Cambridge Monopoly is an honor. And that we should all play along.