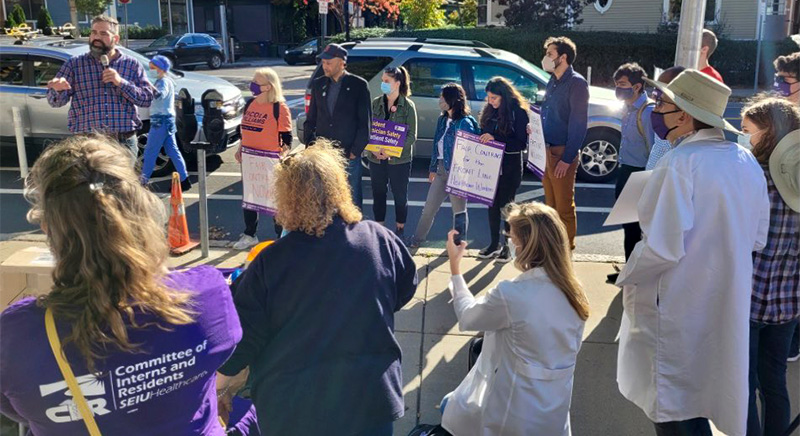 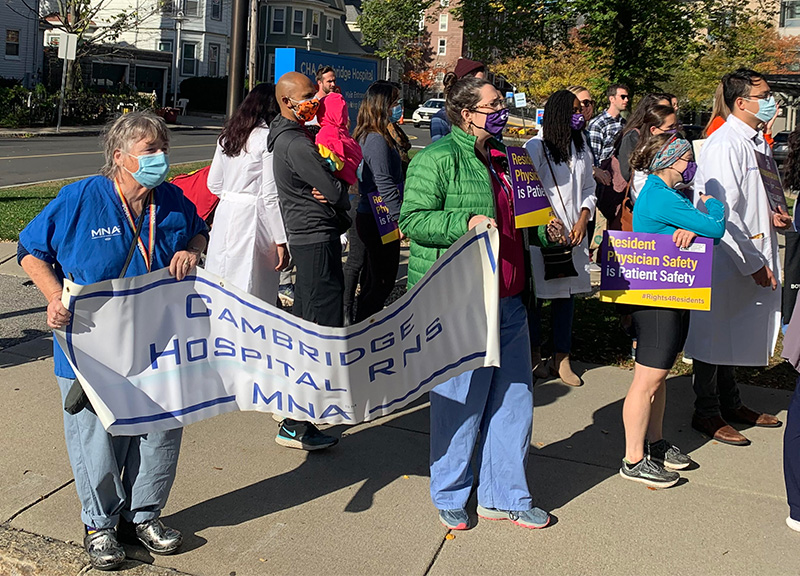 Resident doctors at Cambridge Health Alliance – physicians in training after graduating from medical school – say the health care system is refusing to give them a fair contract after relying on them for frontline care during the pandemic. The doctors’ union says the Alliance offered a wage increase that doesn’t keep up with inflation and has refused to guarantee that their current mental health provider won’t change. In response, CHA spokesman David Cecere said the contract offer is fair and the Alliance recognizes the value of its residents, including their “immeasurable role” in dealing with the pandemic.

The resident physicians see it differently. “We work so much. We work so hard for our patients, even when it sacrifices our own health,” said Maryam Robinson, a third-year family medicine resident. “This is totally disheartening and exhausting,” she said of the contract negotiations, which came after residents “helped keep the hospital afloat” during the pandemic. Robinson, a single parent, said her salary of $69,056 wasn’t enough to cover child care, forcing her to send her son out of state to stay with family members. Then the pandemic prevented her from visiting him, she said. Now 5 years old, he has returned to live with her.

Robinson’s pay would qualify her and her son for low-income housing in Cambridge, where the income limit for some units is 80 percent of the area median income, or $77,000 for a family of two. And although housing costs are higher in Cambridge than in many surrounding areas, CHA residents, interns and fellows are paid less than their counterparts in most Boston hospitals, according to figures provided by the union.

The doctors are members of the Committee of Interns and Residents, a national union representing 20,000 doctors in training; the CHA unit numbers 112 interns, residents and fellows. The committee is a local of Service Employees International Union, which represents many unionized health care workers. Relatively low-paid residents and interns often form the backbone of the workforce in teaching hospitals such as the Alliance’s.

“We have made every effort to come to an agreement with CIR and have in fact reached agreement on many of their proposals. We are confident that our offer is fair, supports outstanding patient care and reflects respect for the tremendous contributions our resident physicians and interns provide to patient care,” Cecere said.

Cecere said the Alliance held 11 negotiating sessions with the union in the past six months in an attempt to reach “a fair contract.” Training doctors “is essential to CHA’s mission to serve our communities, and our interns and resident physicians play a critical role in delivering high quality care to our patients. They also played an immeasurable role in our ability to manage the Covid-19 crisis,” he said.

“As a public health system providing essential and often underfunded services [such as behavioral health], Cambridge Health Alliance is a key asset to our community. We also strive to be an employer of choice, prioritizing fair wages and benefits for our employees,” Cecere said.  The Alliance is “committed to providing competitive salaries for our employees across all job roles.”

It’s the second time a union has accused the Alliance of disregarding the needs of employees who made extraordinary efforts to help during the pandemic. The Massachusetts Nurses Association said during contract negotiations in April that nurses had gone from “heroes to zeroes,” and protested at sites in Cambridge and Somerville. In the end, CHA was able to consolidate its vacation, holiday and sick time system, which the union had opposed. The contract was ratified by only two votes.

CHA has told the Committee of Interns and Residents its final offer is a 2.5 percent raise from the date the contract is ratified until Jan. 1, then a 1 percent raise on that date and every 6 months until June 30, 2024, said Erica Lee, a first-year psychiatry resident and a member of the union negotiating committee. There would be no increase for the period from June 30 this year, when the current contract expired, until ratification, she said. The union estimates the offer is half the rate of inflation.

Lee said the private company that now provides mental health benefits to residents “has been incredibly helpful.” The services are available on call and come from a provider that’s “not affiliated with the institution,” she said, referring to the Alliance. “Continuing it is absolutely crucial. We will need something to cope with the trauma” of caring for Covid patients and others during the pandemic, she said.

The Alliance won’t promise to keep the provider or give the union a say in any decision about changing it, Robinson said.

Lee said psychiatry residents have been facing a tremendous increase in patients affected by the pandemic, exacerbated by isolation. The doctors are seeing “suicidality, homicidality, psychosis,” she said. “We’re overwhelmed,” she said. “To have this onslaught of patients who … come in in dire circumstances, it’s distressing.”

After many staff providers left CHA because of dismay over long waits for services and more data-driven decisions about providing care, “there was a two- to three-month wait for [referrals] after walking into the emergency room,” Lee said.

Her statement bore out assertions from two groups of providers, who wrote to the board of trustees in July about a crisis in mental health services. An Alliance spokesperson said the waiting list was not as long as the groups had said but did not disclose how long it was.

Lee said residents are “doing our best to make up” for a shortage of staff. For example, third-year psychiatry residents took on more outpatients, those who have not been admitted to the hospital, she said.

Union members held a demonstration outside Cambridge Hospital on Halloween. They were joined by city councillors Quinton Zondervan and Jivan Sobrinho-Wheeler, councillor-elect Burhan Azeem and state Rep. Mike Connolly. All pledged their support. There was no mention of the issue at the City Council meeting Monday.

The city and the Alliance have close ties; the Alliance sprang from the former Cambridge City Hospital, and CHA operates the city’s public health department in return for getting about $8 million a year from the city. City Manager Louis A. DePasquale must approve members of the Alliance’s board of trustees and sits on the board and heads its finance committee.

Robinson, the family medicine resident, said she and many of her colleagues chose CHA for their residency because of the Alliance’s mission of “care for the people … To be at the center of making that happen for our patients every day, then to be treated like we’re so disposable, it’s incredible and disheartening.”

This post was updated Nov. 10, 2021, with clarifying language from the residents’ union around patient referrals and mental health benefits.