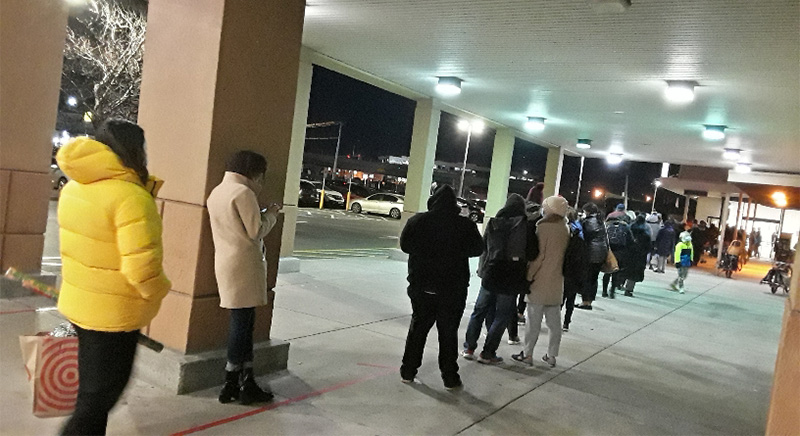 Cambridge reported 75 new cases of Covid-19 among residents Tuesday, apparently the largest daily number of infections since April 10, 2020, when 90 were identified. The cases Tuesday brought the seven-day average rate of infections to 18.4 per 100,000 population.

City health officials had expected an increase after Thanksgiving gatherings and travel. The Cambridge Public Health Department said it doesn’t know of any “significant clusters” of infections at this time. “It is possible that the increase in cases is related to Thanksgiving travel and get-togethers, and CPHD will continue to closely monitor local and state case data,” the department said in its daily Covid email update.

Reported infections among Cambridge residents spiked in April 2020 after the health department initiated groundbreaking surveillance testing of every resident and employee in the city’s three nursing homes and four assisted living facilities, The result exposed 203 cases – 169 in residents – after city health officials had known of only 24. The state moved to test every resident and staff member in long-term care facilities statewide after the city’s initiative.

Recently, no new cases in Cambridge long-term care residents and staff have been reported for months. Most cases are occurring in younger residents – those in their 20s and 30s and those 19 or younger.

In Tuesday’s email, the health department urged residents to get vaccinated and obtain a booster shot if eligible. On Monday, the Centers for Disease Control and Prevention strongly recommended that everyone 18 and older who is fully vaccinated get a booster shot if it’s been six months since their last Pfizer or Moderna vaccination, or two months after a J&J shot.

The CDC said the emergence of the omicron variant made vaccination especially important and urged people to get tested if they feel sick. Cambridge offers free testing on Sundays at 50 Church St., Harvard Square; Mondays and Thursdays at the CambridgeSide mall; and on Wednesdays at St. John the Evangelist Church, 2254 Massachusetts Ave., North Cambridge.