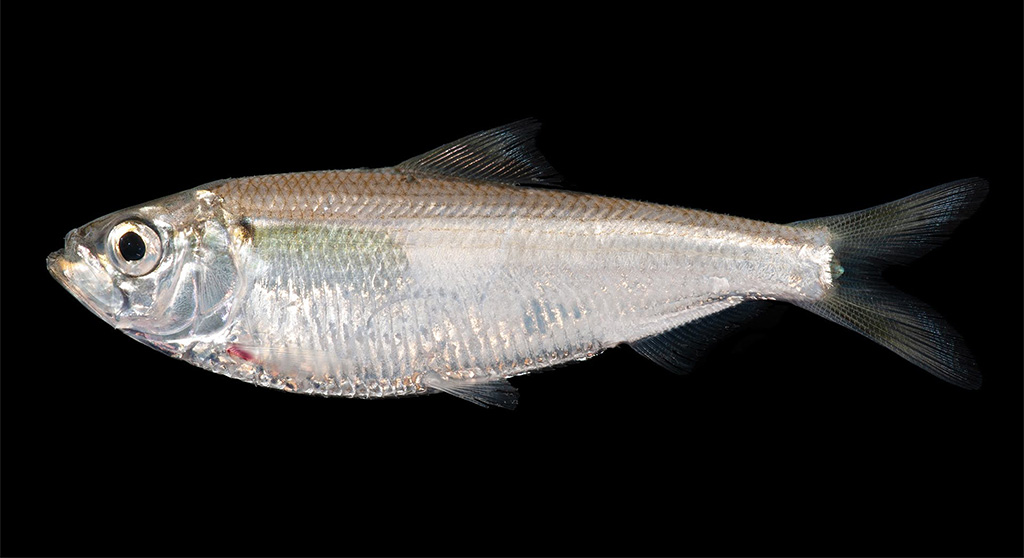 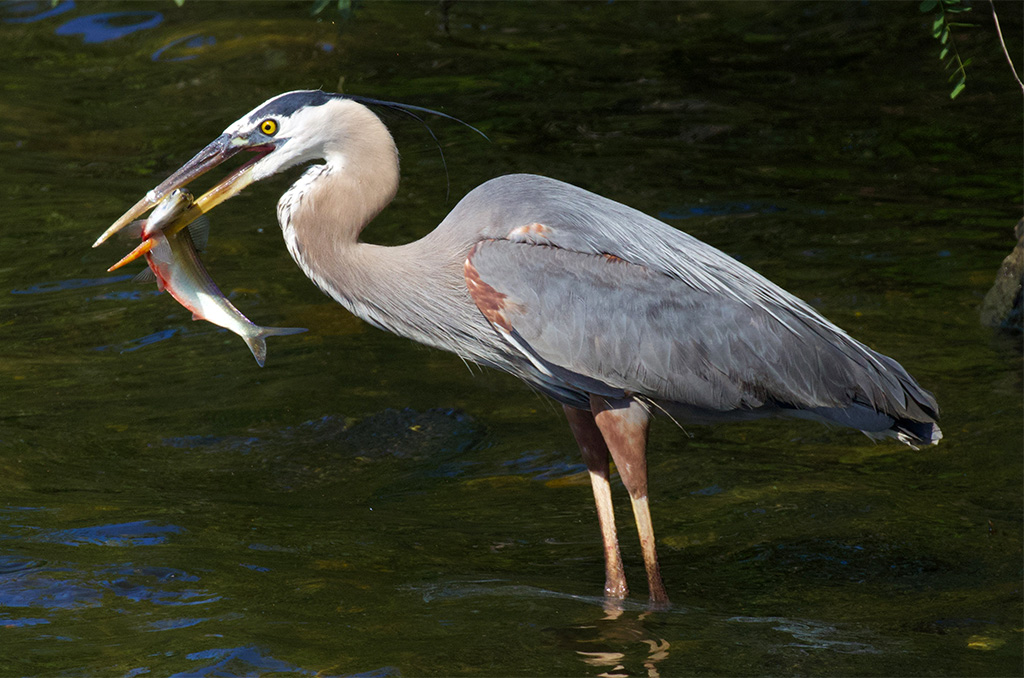 River herring, such as alewives, are preyed upon by many birds, such as this great blue heron at the Mystic lakes. (Photo: Brian Rusnica)

Alewives be a kind of fish which is much like a Herring, which in the latter end of Aprill come up to the fresh Rivers to spawne, in such multitudes as is allmost incredible, pressing up in such shallow waters as will scarce permit them to swimme, having likewise such longing desire after the fresh water ponds, that no beatings with poles, or forcive agitations by other devices, will cause them to returne to the sea, till they have cast their Spawne.

English ironworker William Wood wrote this about New England alewives in 1634. Back then, alewives were much more numerous. According to William Wood, “I have seene ten thousand taken in two houres by two men, without any wayre at all, saving a few stones to stop their passage up the river.”

Alewives were important as food and fertilizer for indigenous peoples living throughout eastern North America from Nova Scotia to North Carolina. You may have heard that indigenous groups buried fish as fertilizer when they planted crops. Well, alewives were the fish they used. It is likely that the Wampanoag Tisquantum, or Squanto, showed the pilgrims how to “fish their corn,” by placing alewives in the ground with corn, beans and squash seeds planted over them. The colonists preferred their method of planting crops in rows, but they recognized the benefit of using alewives to fertilize their corn, barley, peas, pumpkins, squash and beans.

Thomas Morton wrote that one acre of corn fertilized with alewives yielded as much as three acres without the fish. Alewife-fertilized cornfields were so important to the survival of European settlers that dog owners whose dogs dug up cornfields were fined. If the dog owner did not pay the fine, the dog could be shot. In 1623, the Plymouth Colony introduced the first known fishery regulations in North America to protect these fish. 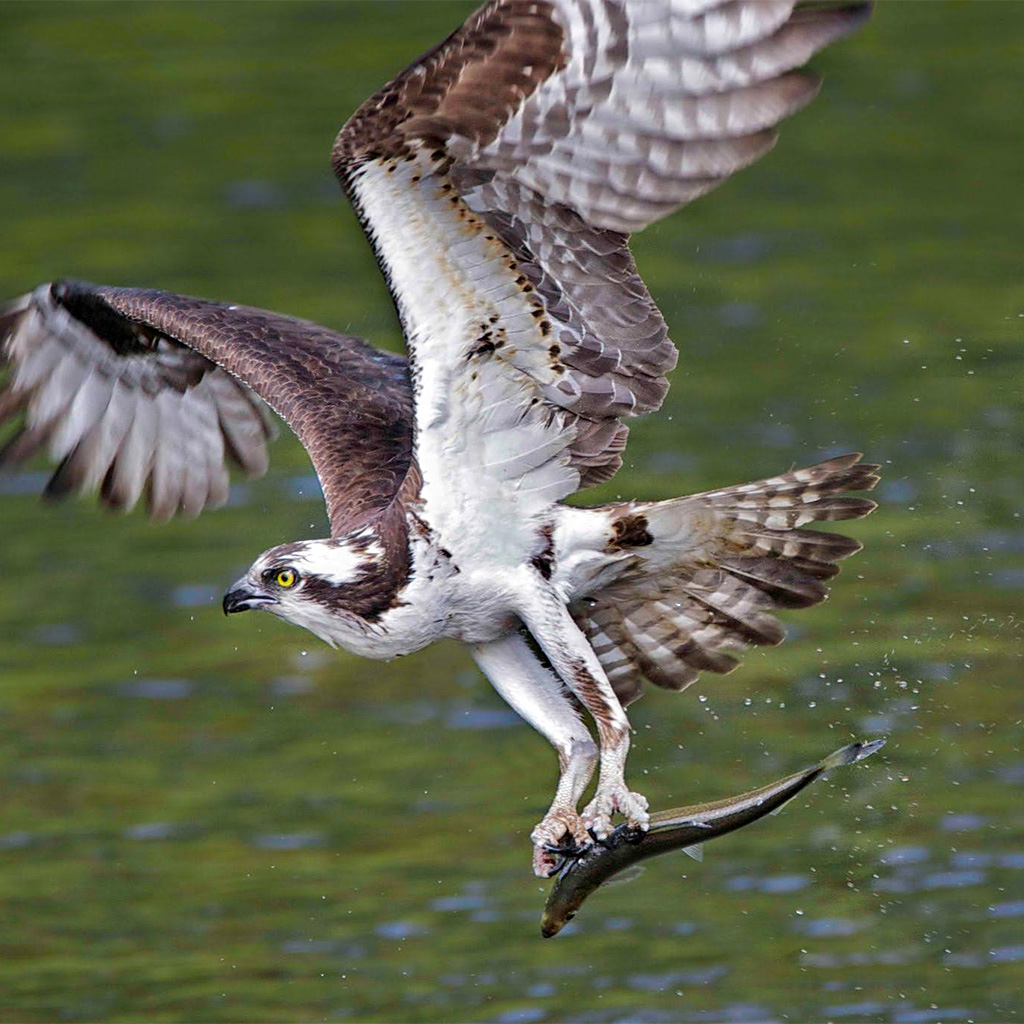 In 1634, the General Court granted Cambridge (then called Newtowne) the right to take over the fish weir of native people along the Alewife Brook (then called the Menotomy River). The brook was clear and deep and 20 feet wide in places. The weir was 740 feet downriver from what is now Massachusetts Avenue. Settlers leased the weir and sold the fish to Cambridge residents. The first to do this, John Clark, was required to deliver some of these fish to the few indigenous people who were still alive, as they were no longer allowed to fish in the river. In the 1630s, two men obstructed this fish weir, and the court estimated 200,000 alewives were lost that would have gone to Cambridge farmers, leading to the “impoverishing of divers poor families.”

The Alewife Brook remained an important fishery until the Civil War, when toxins from nearby tanneries polluted the water. Pollution also entered the river from sewers and a cemetery. In 1875, Somerville built tide gates that reduced the alewife run even further. 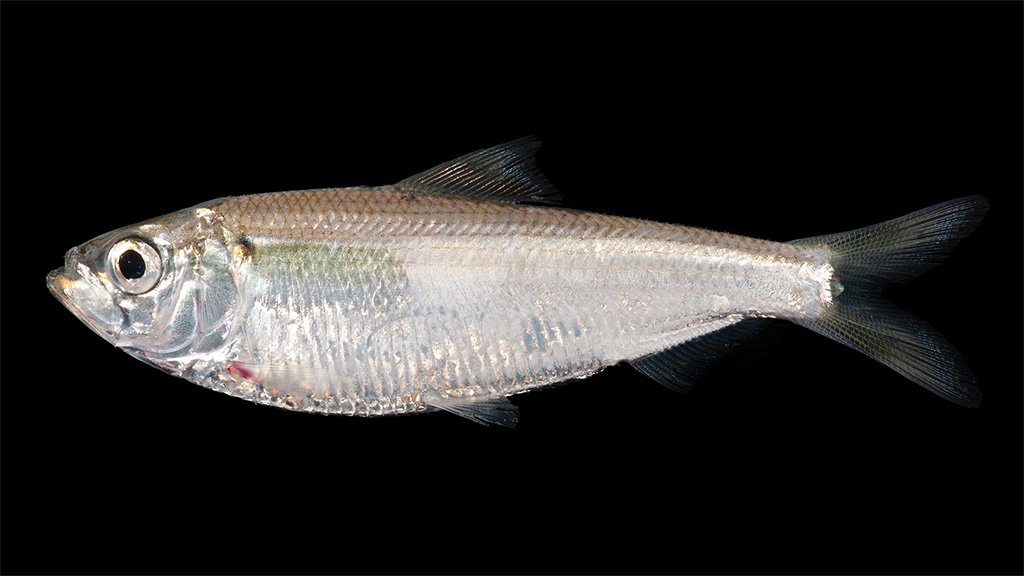 Alewives are silver with a greenish back and large eyes. They have a black shoulder spot behind each eye. (Photo: Robert Aguilar, Smithsonian Environmental Research Center)

The original native name for this fish was likely pronounced aloof, but Europeans transformed aloof into alewife because of the fish’s resemblance to a portly female tavernkeeper. According to John Josselyn, in a 1670 account of his voyages to New England: “The Alewife is like a herrin, but has a bigger bellie therefore called an Alewife.” Salted or smoked alewives stored well throughout the winter. It wasn’t until refrigeration became common in the 20th century that shopkeepers sold the many varieties of fish that are common in the modern era. Today the Massachusetts Division of Marine Fisheries prohibits recreational or commercial harvesting of alewives due to concern about their depleted numbers.

Alewives are sea-run fish that spend most of their life in the ocean, but triggered by day length, they return to spawn in the freshwater rivers and lakes where they were born. An average alewife is less than a foot in length and weighs about half a pound. Large alewives can be 14 or more inches. Europeans were so dependent on alewives for winter survival that feuds arose whenever a dam was built that prevented alewives from reaching their spawning grounds. 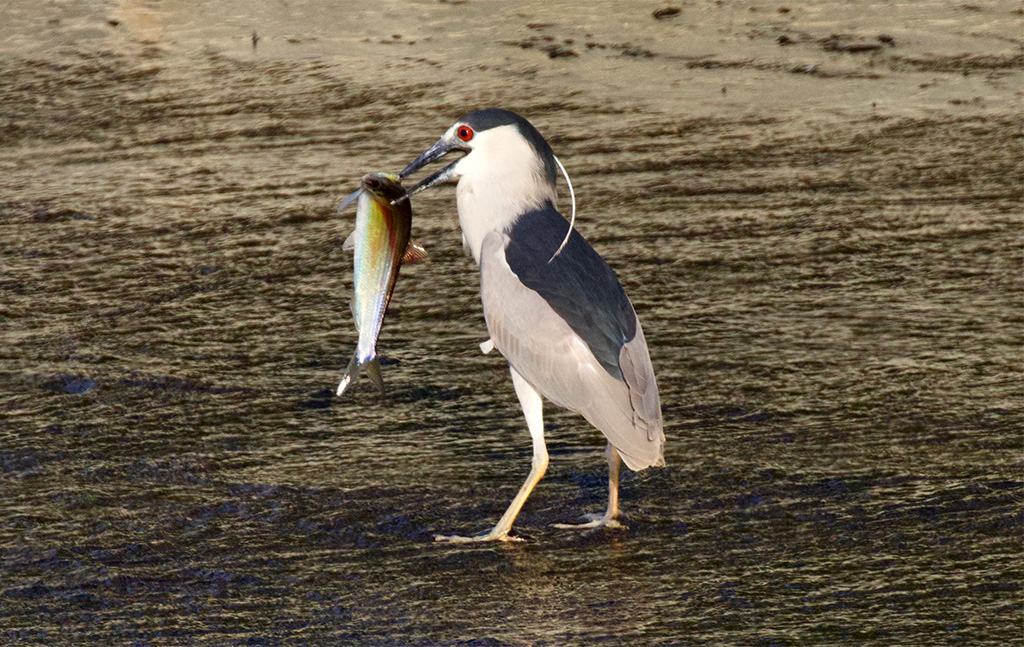 A black-crowned night heron feasts on a herring on the Mystic lakes. (Photo: Brian Rusnica)

Every spring, alewives, guided by their sense of smell, migrate upstream from the ocean to rivers, ponds and lakes to spawn. Some males return when they are 3 years old. Females return when they are about 4 years old. In earlier times, spawning herring ranged from 3 to 10 years old. These days, the herring are almost all 3- and 4-year-olds. One female can lay more than 300,000 eggs; males fertilize them at the same time. Then the eggs settle to the bottom of the river or lake. After spawning, the adults head back downriver to the ocean; some will return the following spring.

After the eggs hatch in a few days, baby alewives live in the pond or lake where they were born eating zooplankton, small organisms that drift with water currents. As they grow, they feed on larger bottom-dwelling crustaceans. Baby alewives have a very high mortality rate: fewer than one out of 80,000 will migrate back to the ocean. In the late summer to fall, when the surviving alewives have reached 1 to 6 inches in length, they swim downriver to the ocean where they finish growing into adults. 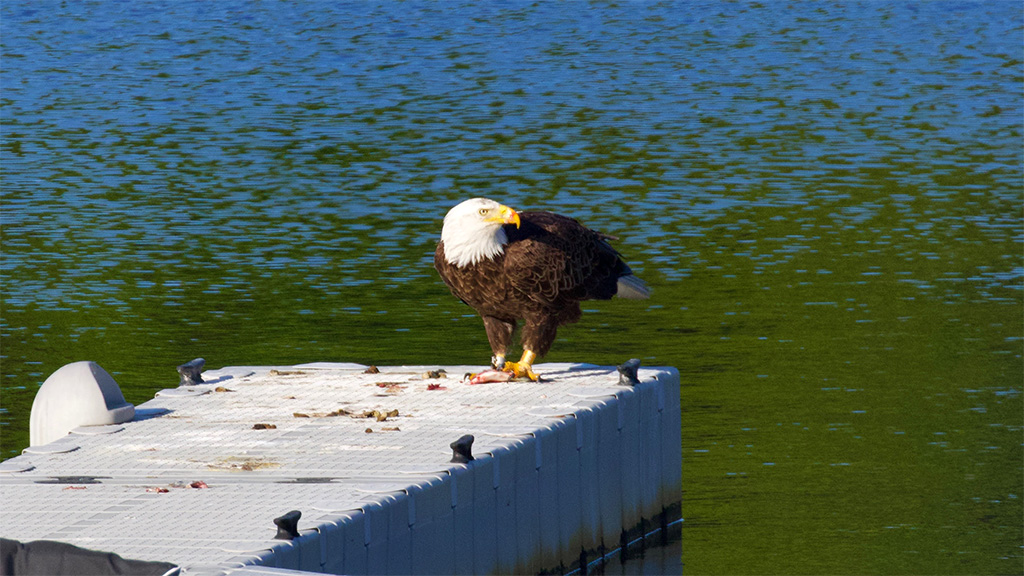 In Cambridge, the Alewife Brook flows into the Mystic River watershed. Alewife station, at the end of the red line, is named after these once numerous fish. Today, unfortunately, there are no longer alewives in the brook named after them. According to watershed scientist Andy Hrycyna of the Mystic River Watershed Association, the Alewife Brook is highly polluted and has very low levels of dissolved oxygen, so river herring do not want to use it. 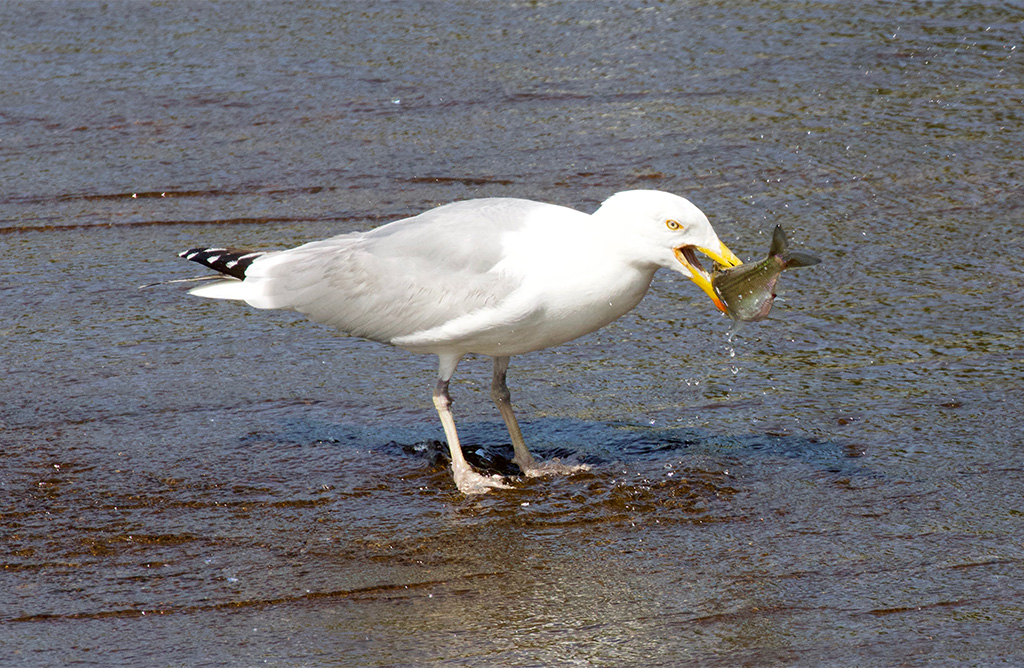 Gulls are one of many types of birds that prey on river herring. (Photo: Brian Rusnica)

In 1903, a malaria epidemic hit four cities in the Alewife Brook Great Swamp area. To remove stagnant pools of water, engineers rechanneled the Alewife Brook into a concrete ditch between Fresh Pond and Route 2. In addition, combined sewer overflows dump excess water during heavy rainfall into the Alewife Brook. These discharges prevent sewer backups into homes but harm the water quality in the river. There used to be a dozen CSOs that dumped sewage into the Alewife Brook in Arlington, Cambridge, Somerville and Belmont. Now there are six, so some improvements have been made. But addressing the problem costs money, and progress has been slow.

Although alewives are not an endangered species, in many places their habitat is threatened by dams along spawning rivers. Nearby on the Mystic River, for example, alewives are still abundant – perhaps not as abundant as they were in the 1600s, but they are doing well enough that there is cause to be hopeful about their future. Alewives on the Mystic River travel from the ocean through the Amelia Earhart dam upriver to the Lower Mystic Lake. There is a dam between the upper and lower Mystic lakes. Until recently, alewives could not get from the lower lake to the upper lake, so people hauled the fish over the dam in buckets, called a bucket brigade.

An alewife as painted by Ellen Edmonson, 1927.

In 2012, engineers rebuilt the dam to include a fish ladder and eelway. Now alewives can travel through the dam to reach the Upper Mystic Lake, which increases their breeding habitat by 60 percent. The Mystic River Watershed Association is working to open up additional breeding grounds north of the Upper Mystic Lake. Since 2012, the number of herring migrating through the dam has increased from around 200,000 to as many as 800,000 in some years. You can become a citizen scientist and help count the river herring without even leaving your living room.

Alewife populations have declined throughout much of their North American range – the entire Eastern Seaboard – due to overfishing in the ocean, dams, drought and habitat loss. But with good management practices, we may once again return to days such as this:

Misticke [Medford] is seated by the waters side very pleasantly … At the head of this River are great and spacious Ponds, whither the Alewives preasse to spawne. This being a noted place for that kinde of Fish.