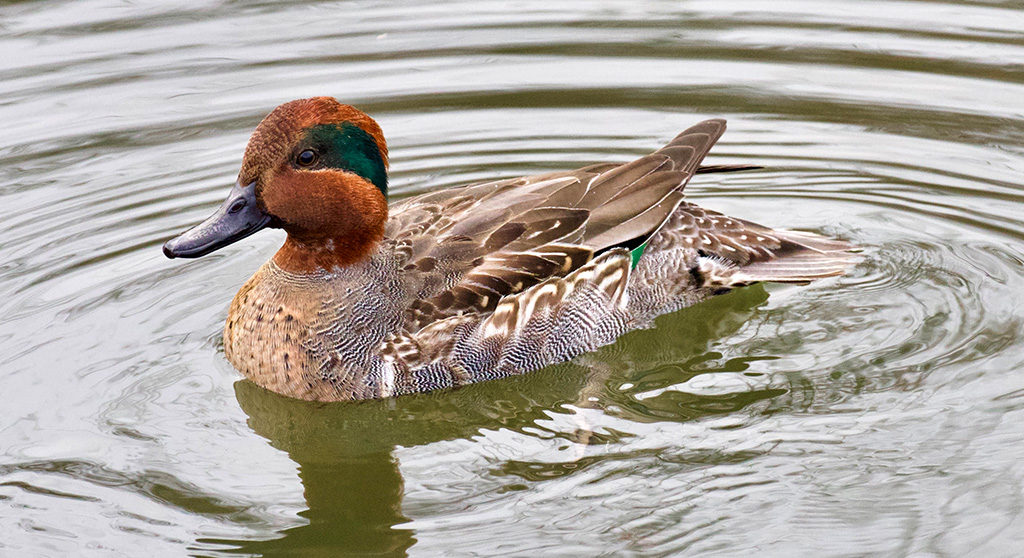 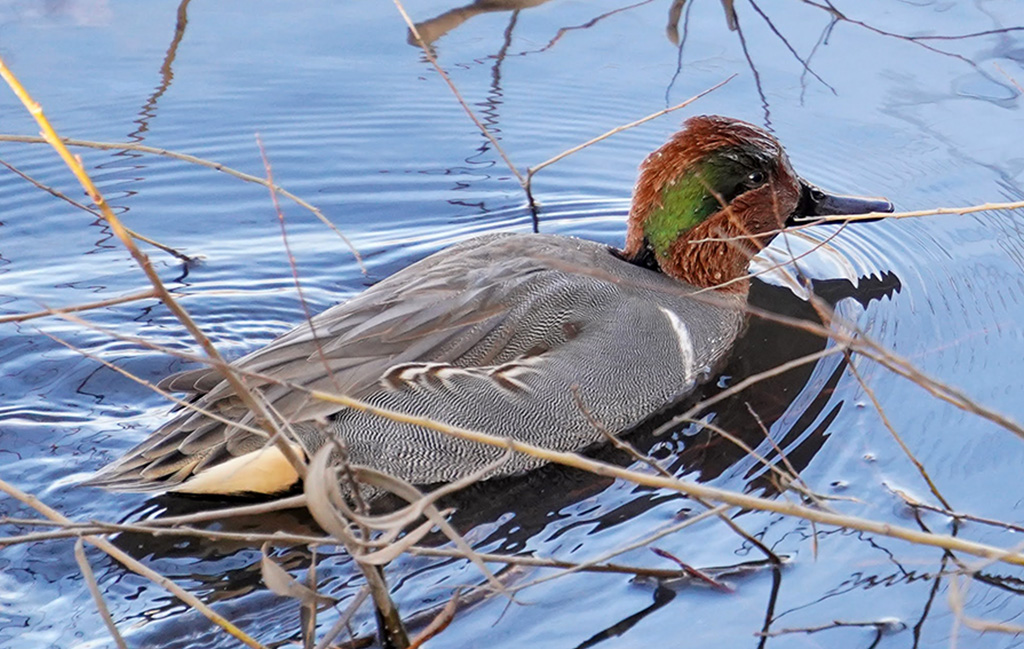 A green-winged teal forages near Alewife in December. Adult males have a narrow white stripe extending on the shoulder. (Photo: Jeanine Farley)

In this tale of two kinds of wildlife, Thomas Morton, sea captain and pirate Richard Wollaston and a couple of other profiteers came to North America in 1624 with 30 indentured servants as part of a trading venture. They formed a trading post called Mount Wollaston on land shared by the Massachusett people in what is now Quincy. There they began trading guns and liquor with the Massachusett for furs and supplies.

In 1626, Wollaston traveled to Jamestown, Virginia, where he sold some of the indentured servants to tobacco planters as slaves. This angered Morton, who urged the remaining servants to rebel. According to William Bradford, Morton said:

You see  that many of your fellows are carried to Virginia; and if you stay … you will also be carried away and sould for slaves with ye rest … I, having a parte in the plantation, will receive you as my partners and consociats; so may you be free from service, and we will converse, trad, plante, & live togeather as equalls, & supporte & protecte one another.

This seemed like a good idea to the servants left behind, so they collaborated with Morton. Wollaston never returned to Massachusetts. Morton renamed the colony Ma-re Mount (Merrymount), a play on the Latin for sea (mer), the mother of God (Mary) and the emotion (merrie). 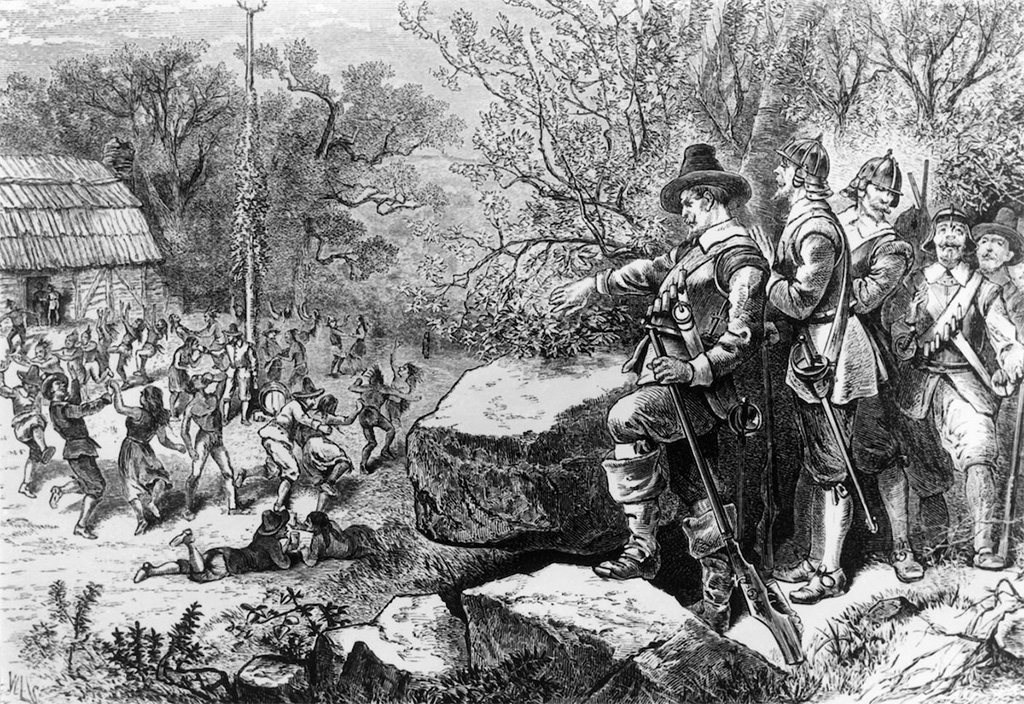 Thomas Morton set up a maypole in his Merrymount colony where residents danced and drank and “frisked,” angering Pilgrims and Puritans.

According to the governor of Plymouth Colony, William Bradford, the settlement suffered under Morton:

After this they fell to great licenciousnes, and led a dissolute life, powering out them selves into all profanenes. And Morton became lord of misrule, and maintained (as it were) a schoole of Athisme [atheism].

Despite Bradford’s disapproval, Morton’s settlement and trading post became quite financially successful – more successful than the settlements of the Puritans in the Massachusetts Bay Colony and the Bradford’s pilgrims in Plymouth. Morton was not steeped in the religious conservatism of the Puritans and the Pilgrims. In fact, he was quite the opposite, celebrating both Anglican and pagan English traditions. In the spring, Morton set up an 80-foot pine maypole in Merrymount dedicated to Bacchus, the Roman god of wine and merriment. There his men danced and drank and “frisked” with Massachusett women.

This heathen behavior angered the Pilgrims and Puritans. Bradford wrote of this debauchery in “Of Plymouth Plantation”:

They allso set up a May-pole, drinking and dancing aboute it many days togeather, inviting the Indean women, for their consorts, dancing and frisking together … Morton likwise (to shew his poetrie) composed sundry rimes & verses, some tending to lasciviousnes, and others to the detraction & scandall of some persons, which he affixed to this … idoll May-polle.

Morton described the festivities this way in a song he wrote himself:

Lasses in beaver coats come away,
Yee shall be welcome to us night and day.

The Puritans told tales of debauchery and heathenism at Merrymount. Morton felt he had set up a multicultural utopia, or at least a successful trading outpost. It’s not clear how the Massachusett felt about all of this, but William Bradford had had enough. He demanded that Morton stop selling guns to the Massachusett. Morton refused. Bradford then sent Myles Standish to arrest him. Morton surrendered peacefully. According to Bradford “if they had not been over armed with drinke, more hurt might have been done.”

Morton was taken away without food to a deserted island off the coast of New Hampshire. Soon, he found a ship back to England, only to return the following year in 1629. He was arrested again by the Puritan leader John Endicott of New Salem, who chopped down the Maypole and burned the settlement, including Morton’s house. Morton again was sent back to England.

And now to the teals 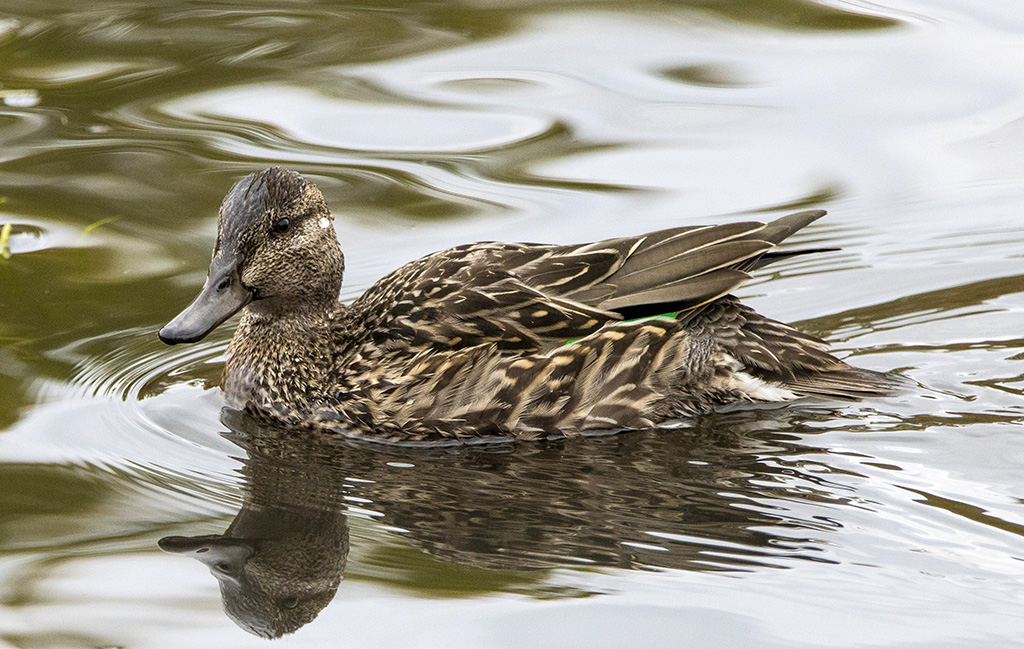 Females are brown and look much like mallards. You can just barely see a patch of green on the wing. (Photo: Richard George)

What does any of this have to do with the green-winged teal (Anas crecca), you ask? Well, after Thomas Morton was exiled to England, he wrote a three-volume book, “New English Canaan,” about his experiences in Massachusetts. The first volume was about the history and beliefs of the indigenous people he encountered: “I found two sortes of people, the one Christians, the other Infidels; these I found most full of humanity, and more friendly then the other.”

The third volume was an unflattering denunciation of the Pilgrims and Puritans and their policies in the colonies. In it he refers to Myles Standish as “Captain Shrimpe” because of his short stature. Of course, this book was not well-received in New England and became the first book banned in the Americas.

The second volume, though, was about the plants and animals of New England.

It is here that Morton writes about green-winged teals: “Teales there are of two sorts, greene winged, and blew winged: but a dainty bird. I have bin much delighted with a rost of these for a second course. I had plenty in the rivers and ponds about my howse.” This is the first recorded documentation of the green-winged teal in Massachusetts, and in the 1600s at least, the birds were plentiful.

More about the teal 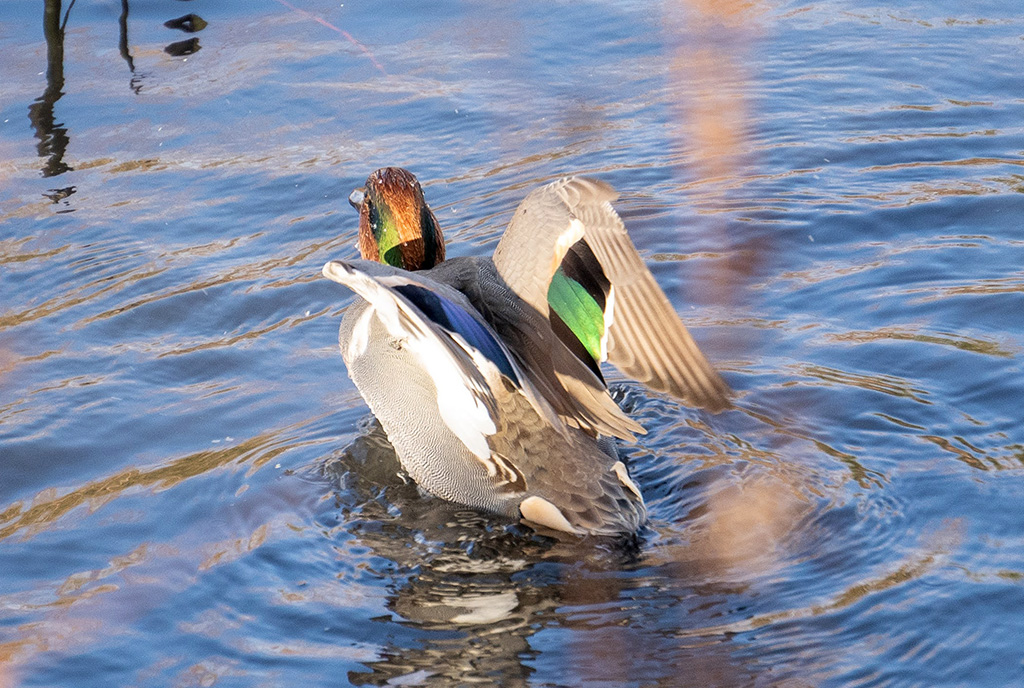 Male and female teals have green wing patches that are mostly hidden when not in flight. (Photo: Jeanine Farley)

The green-winged teal is a small duck that feeds by dabbling for plants in the water. The males have a vertical white stripe on their shoulder and chestnut brown heads with a green stripe. Females look much like a female mallard, although slightly smaller. If the duck flashes a wing, however, you will see a shiny emerald wing. These ducks nest near water.

There are two kinds of ducks: dabblers, who upend themselves to feed from submerged plants, and divers, who swim underwater to find plant food. Green-winged teals are dabblers. Dabblers skim food from the surface of the water or use their bill to filter mud from mudflats. More than any other type of duck, green-winged teals like to eat from mudflats. Dabbling ducks can also take flight directly from the water; diving ducks need a running start along its surface.

Green-winged teals begin to nest as soon as the snow melts. A female usually lays six to 11 eggs, which she incubates for three weeks. A few hours after they hatch, the chicks leave the nest. Green-winged teal youngsters have the fastest growth rate of any duck. 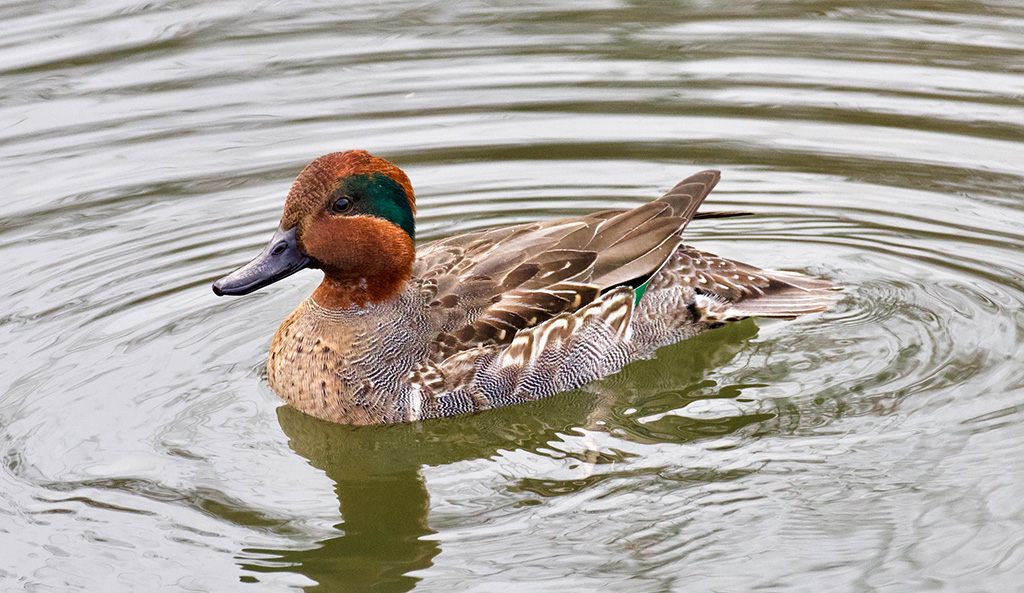 A green-winged teal in January in Alewife Brook Reservation. Males have a chestnut brown head with a wide green stripe behind the eyes. (Photo: Brian Rusnica)

The chicks sometimes return at night for a few days, but they find all of their own food. After about 35 days, they are able to fly.

Green-winged teals can be found in Eastern Massachusetts, Connecticut and Rhode Island during the winter. In spring and summer, they breed in most of Massachusetts, as well as northern Vermont and Maine. In other parts of New England, you will see these birds only during spring migration (which can begin as early as February) and fall migration.

Although green-winged teals were abundant in the 1600s of Thomas Morton, they were heavily hunted in the 1800s and over time became rare. In the 1900s, the birds were protected, and since then their population has increased. Today, however, green-winged teals depend for survival on undisturbed wetlands, which are threatened by increasing human developments.