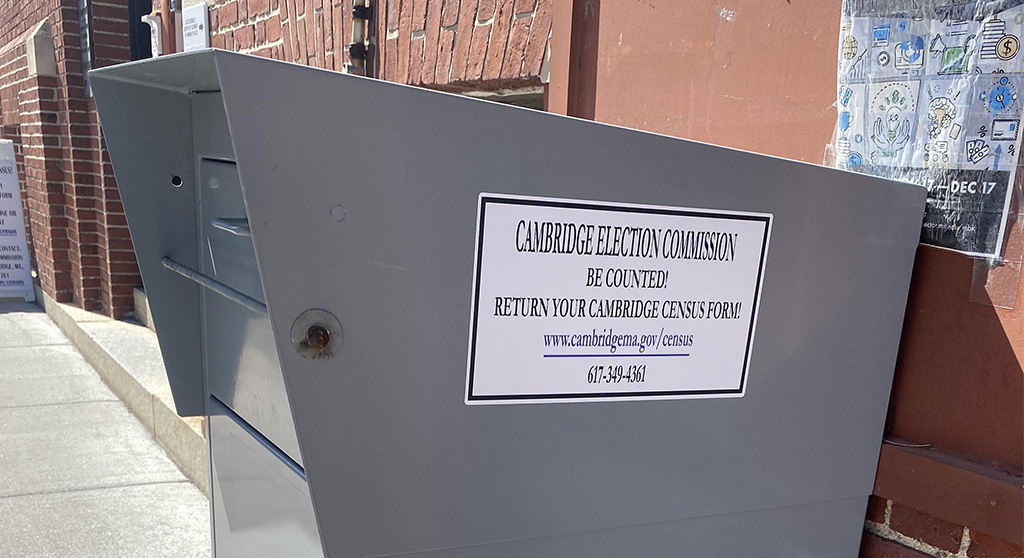 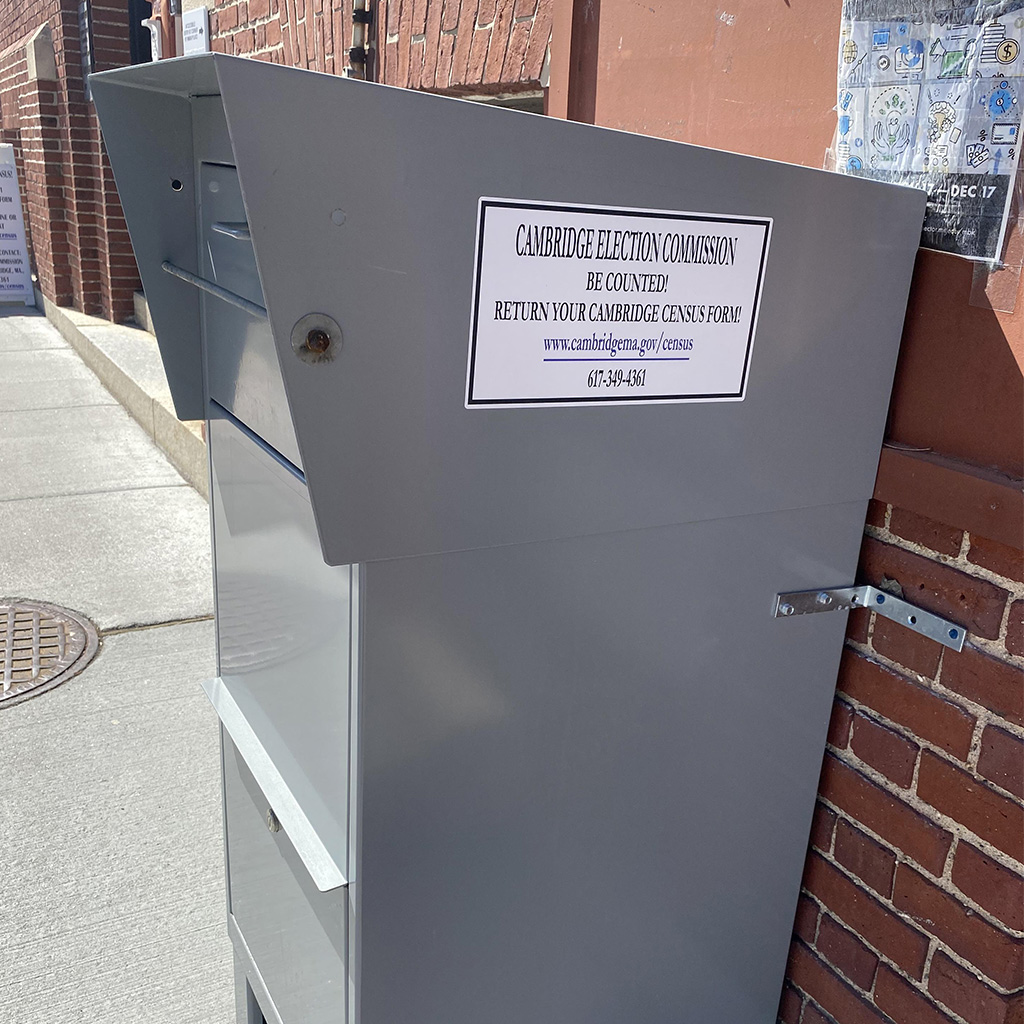 A city dropbox is set up to receive census forms in 2021. (Photo: Election Commission)

Updated Cambridge population numbers based on the 2020 Census have deflated the city’s Covid-19 vaccination performance, with slightly lower vaccination percentages overall but bigger drops in vaccination figures for some age and racial and ethnic groups. The city used the updated numbers for the first time Thursday, creating a different vaccination picture overnight.

Cambridge’s population increased to 118,403 in 2020 from 105,162 in 2010, according to an announcement from the Census Bureau in August. Yet until now, the Cambridge Public Health Department had used lower population estimates from 2019 to calculate the percentage of Cambridge residents and those in demographic subgroups with at least one vaccine shot, fully vaccinated and boosted. Total Cambridge population was set at 111,989, or 6,414 less than the 2020 figure.

These numbers came from the state Department of Public Health, which delayed using 2020 Census figures because it feared that the Census Bureau’s adjustments to protect privacy of individuals could “distort the data” when used to calculate rates and percentages, an official said last year.

Now the state is providing vaccination figures to Cambridge and other communities based on higher population. The new numbers adopt the Census Bureau’s total population count of 118,403 for Cambridge, but it’s not clear whether the demographic breakdown is different from the 2020 Census figures.

It had been obvious for months that some of the vaccination percentages in the city’s Covid-19 dashboard were wrong because population figures were too low – some age groups had more people vaccinated than the total number in that age group. For example, last October the dashboard said there were more residents over 75 who had received at least one vaccine shot than the total population over 75. The discrepancies only grew as more people got vaccinated. This month there were more teenagers from 12 to 15 reported fully vaccinated than the total in that age group.

As of Thursday, that is no longer true. And the math means the percentage vaccinated has gone down. The drop was slight for the total Cambridge population that is fully vaccinated – to 73 percent with the updated population numbers, versus 76 percent before the changes.

The impact of the changes in some demographic groups is larger. For example, after the change the proportion of black residents fully vaccinated fell to 77 percent from 84 percent; Hispanic residents to 56 percent from 69 percent; and Asians to 68 percent from 73 percent.

Cambridge Public Health Department spokesperson Dawn Baxter said the drop in vaccination rates for nonwhite residents had been expected, since the 2020 Census showed population increasing for all demographic groups except white residents. Baxter said the health department is continuing to “target the groups who may have greater barriers to access, and we are confident that we are reaching a diverse group of residents. Data as of 7/18/2022 indicate that of the vaccinations CPHD has administered to date, residents who are Hispanic, black and multiracial represent equal or higher proportions than their representation of the population in the city.”

The city’s announcement of the change noted the small decreases in vaccination percentages for the total population and emphasized that there hadn’t been change in the number of residents who are vaccinated. The more accurate population figures also mean that more Cambridge residents haven’t been vaccinated.

For example, the updated numbers work out to almost 32,000 Cambridge residents not fully vaccinated. Before the change, the number reported as not fully immunized was about 26,000.

In other coronavirus changes and developments, some of the city’s nursing homes and assisted-living centers have recently reported more infections among residents and staff, and a resident of an unnamed long-term care facility died of the virus, according to the city’s Thursday report.

Testing with results that are reported to health authorities continues to drop sharply, similar to the trend worldwide. There were 8,388 tests in Cambridge in the two weeks ending July 9, compared with 30,916 in the first two weeks of May, according to the city’s Covid-19 dashboard. Still, the percentage of people testing positive has remained well above 7 percent; in the early days of the pandemic some public health experts said a positivity rate above 5 percent meant there was not enough testing.

The reported numbers have become a less reliable sign of transmission levels as more people use rapid tests at home and do not report the results to public health agencies, city health officials have said. Virus levels in Cambridge sewage, which don’t rely on individual test results, show levels rising recently in three of four neighborhoods.