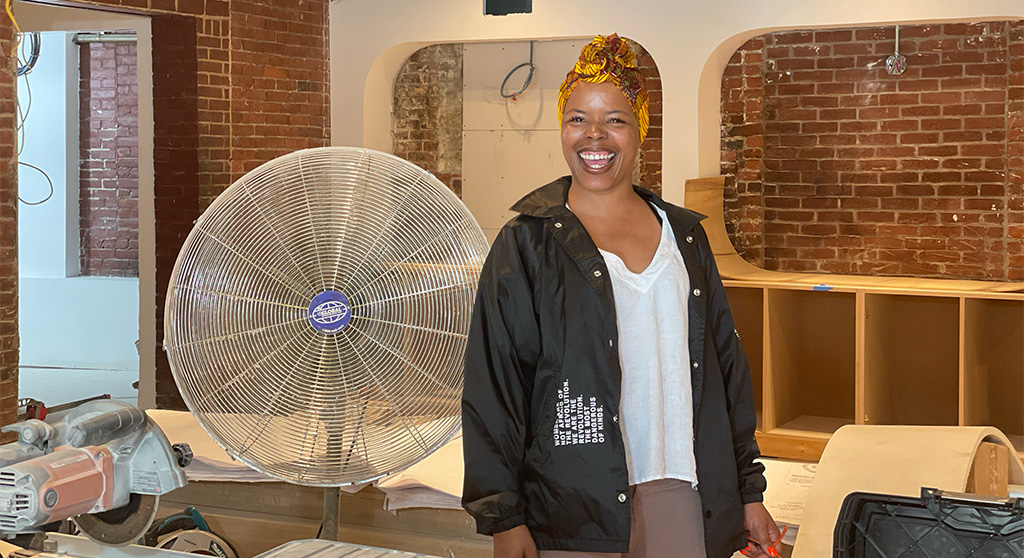 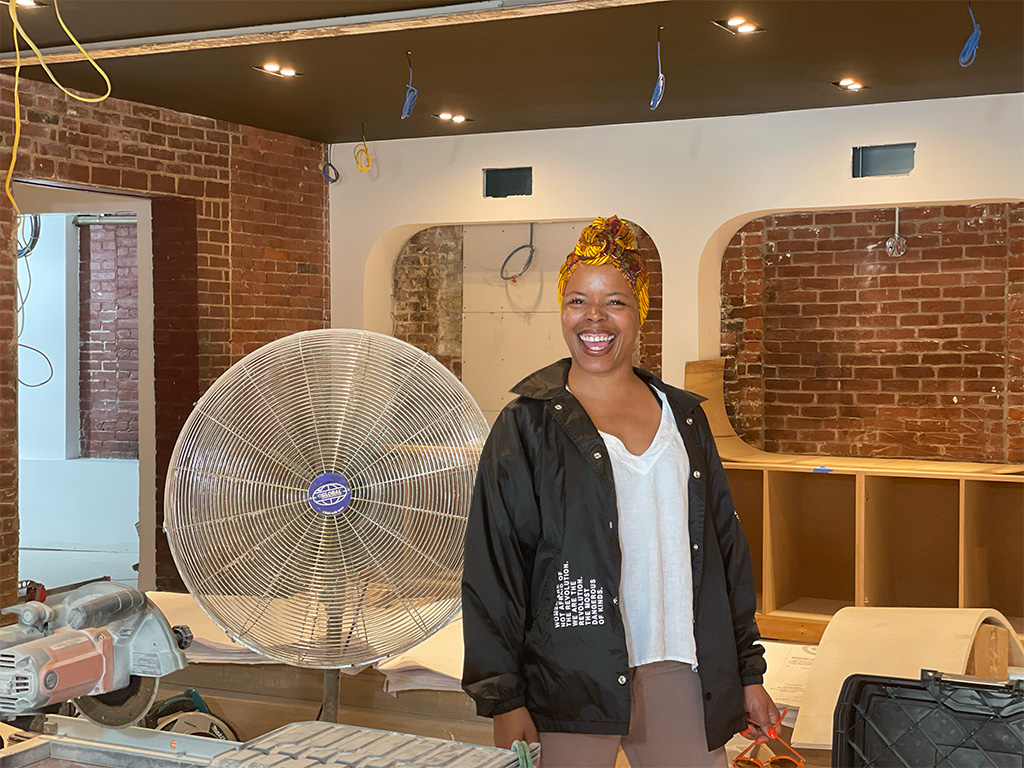 It may seem like a sign of changing times when the Yamba Boutique cannabis shop opens in what is often referred to as Harvard Square’s “Carriage House.” It is to the store’s owner, Leah Samura.

“The fact that it was a police station before it was a carriage house, you know for me just brings it full circle,” said Samura, delighted that the historic home of local law enforcement charged with prohibiting marijuana possession would turn into a site for cannabis education and sales.

The 31 Church St. location off Massachusetts Avenue, next to Lizzy’s Ice Cream, represents a “full circle” move in another way for the boutique owner: Harvard Square is where she and her husband, Sieh, met as teenagers, during a summer program at the Phillip Brooks House, a student-led nonprofit at Harvard.

The boutique will be the second cannabis retail operation for the couple, together since that meeting when she was 14, but saying she was 16, and he was 17. In April, Sieh launched Yamba Market, along with Yamba Joint, a community space in the same building, on Massachusetts Avenue in Central Square. But whereas Market is just that – a tastefully designed, modern day agora of cannabis products arrayed in glass display cases – Boutique will be more about creating a lifestyle. 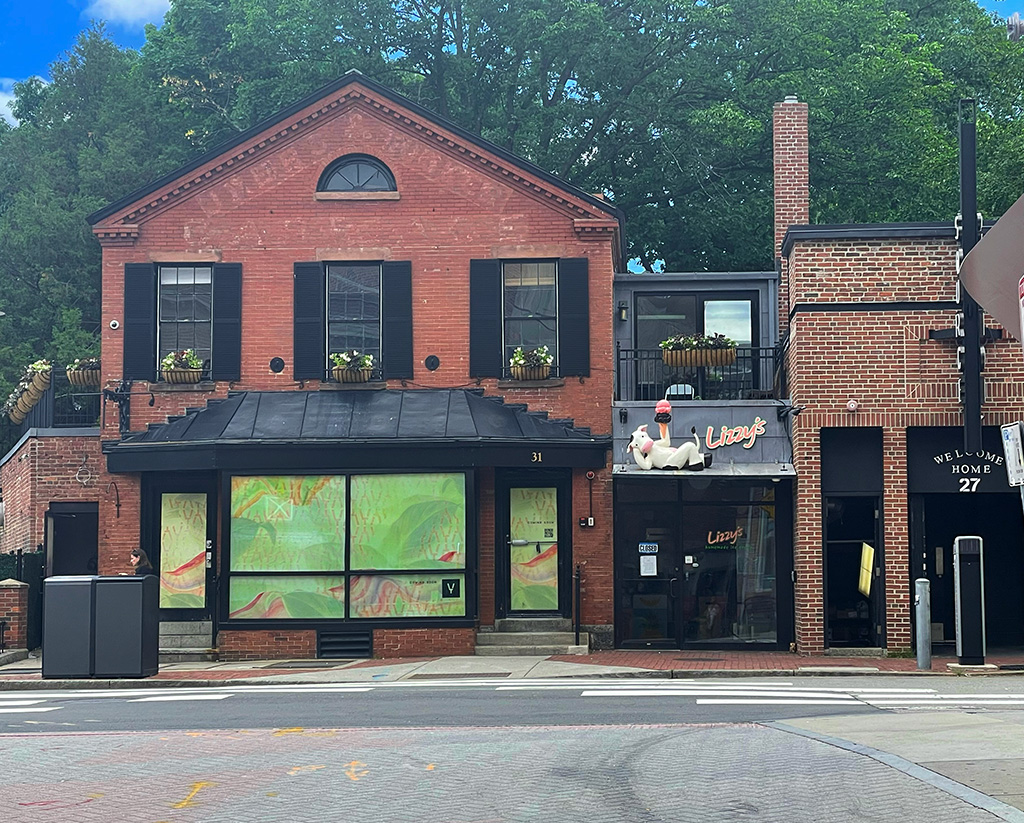 “We like to say that Market is cultured cannabis and that Boutique will be curated cannabis, meaning that it’s more than just selling flower,” Leah said. “I want to carry olive oil, honey, hot sauce, barbecue sauce – things that that we use every day, to make cannabis part of our everyday life. Everybody doesn’t want to just smoke weed, you know?”

Leah also has a specific audience in mind: “Those of us who are often left out of things.” By that, within the cannabis industry, she means consumers who are older, or identify as LGBTQ, or women of any age. “That’s who I want to educate. That’s who I want to learn to believe and know that they can be a part of the cannabis community and culture too.” The programs she has in mind for the second floor at Yamba Boutique reflect that, including demonstrations and lectures that integrate cannabis with healthy lifestyles, from yoga to cooking and sex-positive practices.

For someone who has spent a lifetime trying to remove stigmas and upend stereotypes for herself and others, Yamba Boutique is a logical step. Leah began her career as a social worker, counseling teenage mothers like she and her mother before her, having gotten pregnant at 16 and 14, respectively. “I wanted to try to remove the stigma that we have as teen moms, that we are nothing and that our lives are gonna be ruined.” With the encouragement of a mentor at the Urban League, she soon pivoted from counseling to technology training for underrepresented populations, convinced she could empower others while earning a better wage. 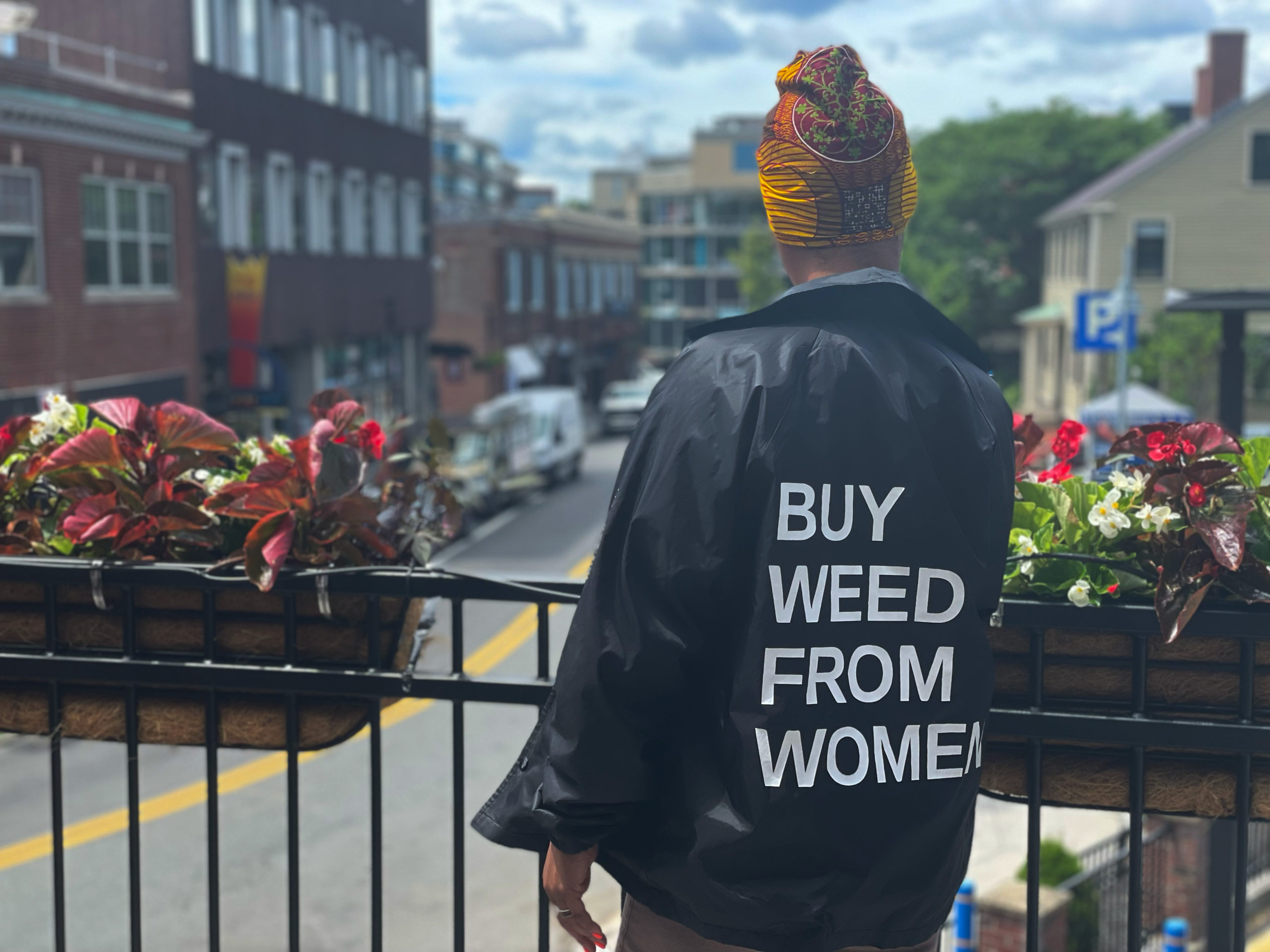 Sieh credits his wife with the pair’s formal introduction to the medically prescribed marijuana market almost 20 years ago, when he was suffering from post-Iraq War PTSD and fibromyalgia. As Leah described it, “he was just in so much pain, and I would tell him that you need to really smoke some weed.” He resisted until he had to give up his dream job with the National Park Service at the Harbor Islands. “One day I came home from work, and he was in extreme pain. I could see it on his face. I just rolled a joint for him, lit it and put it to his mouth and made him smoke it. And I saw his face relax from the first puff.”

Sieh quickly became an advocate and then an activist, lobbying for legalization in Massachusetts. Leah was a more reluctant player. Ashlyn Plunkett, a cannabis consultant, laughed recalling the Samuras at the inaugural class of an incubator program for product developers run by the company Sira Naturals. “Sieh brought her literally, and I use that word in the correct form, kicking and screaming and crying into the cannabis industry.” An eye-opening experience at the incubator – when the couple’s Purient “bedroom cannabis” lubricant topped all other new products in sales – radically changed Leah’s frame of mind. 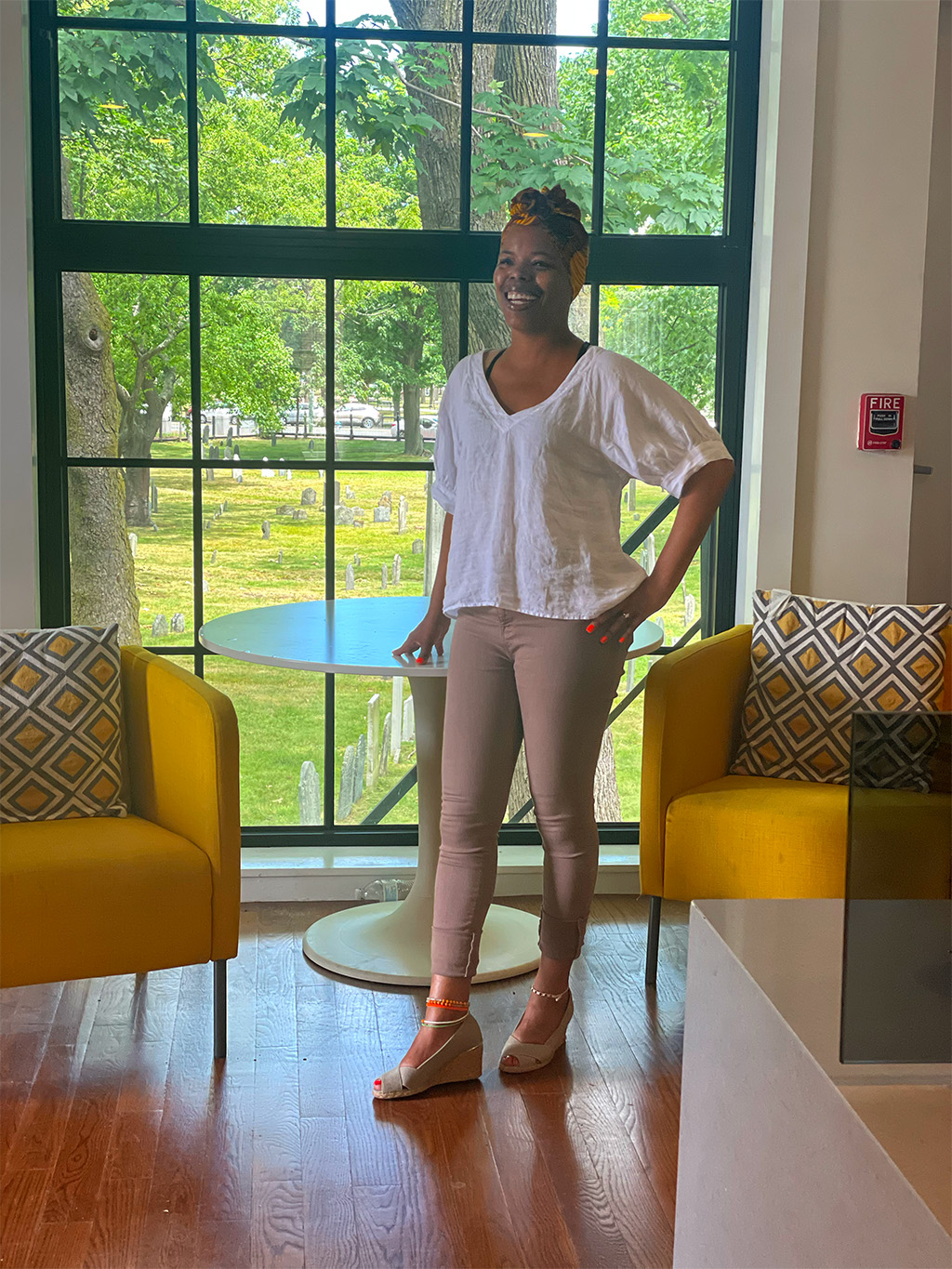 Today, as she stands in the shell of her new site on Church Street, clad in her signature “Buy Weed from Women” jacket, Leah waves her arms, gesturing with a few grand sweeps to suggest some of the magic she hopes to create in the boutique. “You’re gonna see gorgeous curves – and I’m talking about real curves and the curves in the arches. And then we will have this live plant wall that I think that will be just absolutely gorgeous. I can’t wait to see it.” Like Yamba Market, her shop will feature baskets made by the women of Indego, a women’s cooperative in Africa, in honor of the heritage she and Sieh represent.

For customers, the boutique will be a true wrap-around experience, Plunkett said. “[The interior] will have a designer feel, you know, feeling like you walk into a place that’s smaller in scale, but large in personality with feminine elements much different from what Market represents.” From the moment customers walk in until they get home and unbox their packages will reflect the vision, from custom wallpaper to a display window that will be a statement, changing seasonally, she said.

While the Samuras benefited from participation in the state’s Social Equity Program (providing free, statewide technical assistance and training “for individuals most impacted by the War on Drugs, marijuana prohibition, disproportionate arrest and incarceration,” as well as reduced application fees), they faced more than a few obstacles since committing to their two Cambridge locations. Among them, the city’s relatively high barriers to entry for cannabis operations, an absence of traditional bank loans or state funding and a three-year carrying cost of close to a half-million dollars on rent alone for their two properties.

But Leah said she has always been more motivated than most. “I wanted more out of life. Growing up, they used to tell me that I act like a white person because I read all the time and did things in a certain way that wasn’t like everybody else in my family” – aspects of her personality that Sieh was drawn to “from our first meeting,” he said. “She was taking charge of her life.”

Yamba’s 1864 brick building housed the police chief and other law enforcement for 10 years. What followed, according to a The Harvard Crimson, was industry: carriage manufacturing, then the Clark and Mills Electric Co., a boys’ clothing store, Steve’s Ice Cream, a Starbucks coffee shop and hair salon and finally a Community Phone shop. It’s from here that Leah plans to grow Yamba Boutique into a women-oriented “cannabis brand and lifestyle,” supporting dozens of employees, within five years.

First comes an opening. The boutique is estimated to start welcoming customers this fall, depending on supply chain issues and final permitting from the city expected by month’s end.