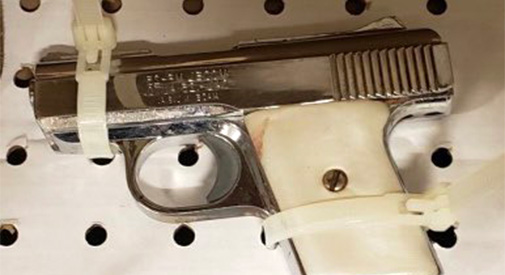 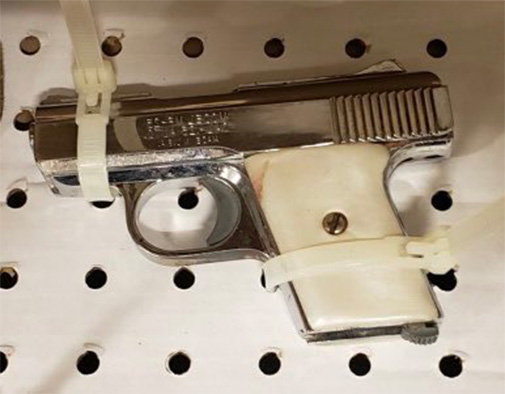 This gun was recovered Saturday in Cambridge Common after an incident in Harvard Square, police said. (Photo: Cambridge Police Department)

A man got in a fight outside a late-night restaurant in Harvard Square and fired a shot in the air from a gun he wasn’t licensed to have – and was quickly found and arrested, police said in a Saturday email.

Kenneth Madden, 26, Reading, was taken into custody early Saturday and faces several firearms charges, including carrying a loaded firearm without a license, possession of a loaded firearm and discharging a firearm within 500 feet of a building, said Jeremy Warnick, director of communications and media relations for Cambridge police.

Madden was seen head-butting a victim during a fight at around 2:30 a.m., firing a shot into the air – injuring no one, so far as police know – and running from Church Street toward Cambridge Common, according to a police account. That’s where officers found him; on a nearby electrical box, a loaded gun was found as well, officers said.

Meanwhile, a shell casing was recovered after being found in a Church Street parking lot.

“For the second time this week, an illegally carried loaded gun was removed from Cambridge’s streets by police officers,” Warnick said.

The previous incident came Tuesday, as police responded to a report of a car parked illegally in a private parking lot and found a loaded gun, a scale and bags of marijuana. It led to the arrest of two 23-year-old Cantabrigians, police said.