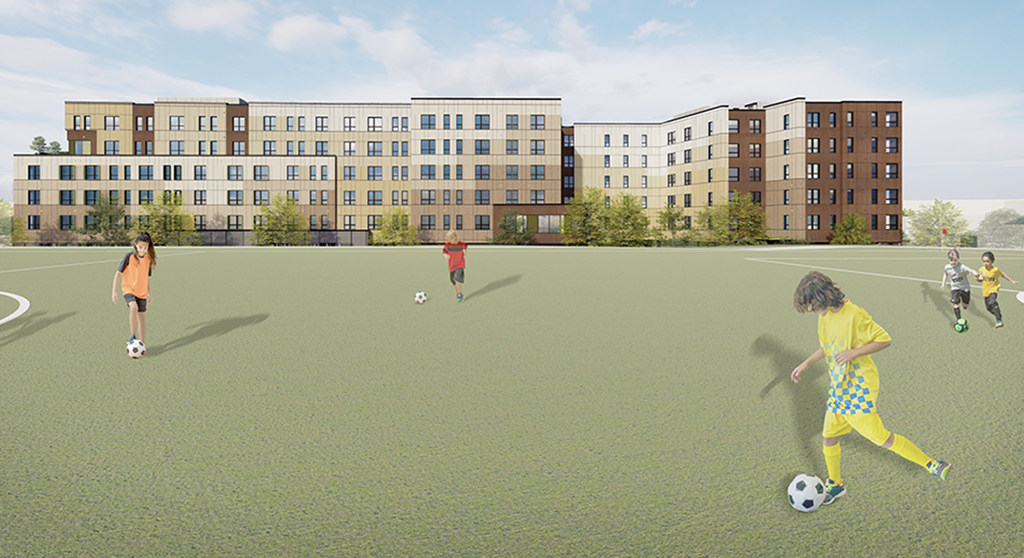 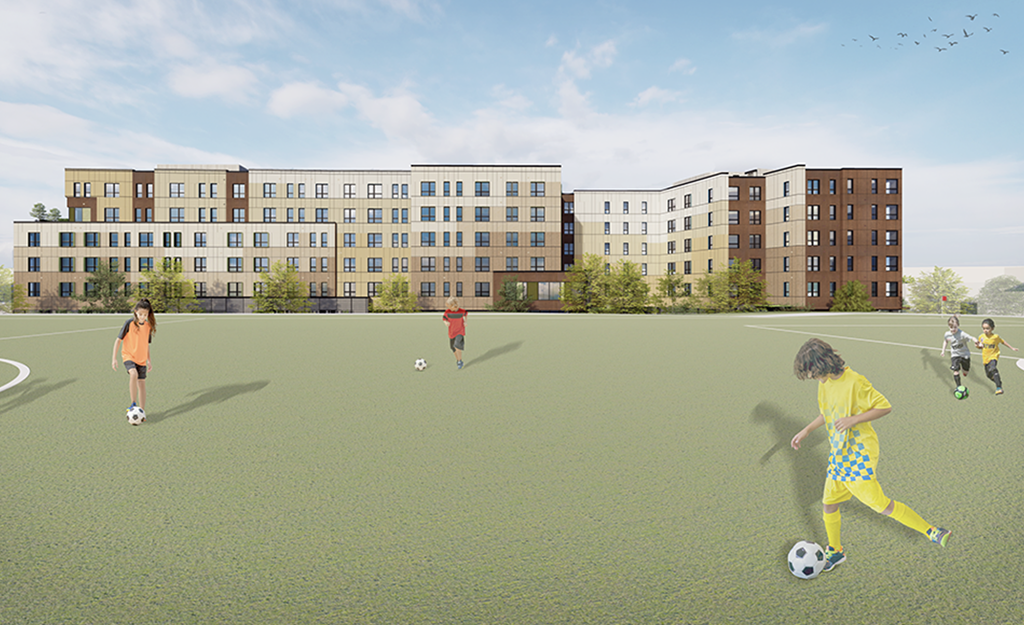 The 107 affordable units coming to New Street next to Danehy Park are an Affordable Housing Overlay success story with an asterisk, councillors say. (Rendering: RODE Architects)

The first report on the effects of Affordable Housing Overlay zoning seemed to raise as many questions as it answered, but city councillors decided Monday at their sole meeting of the summer to keep wondering until they could hold a comprehensive Housing Committee hearing.

Under the zoning passed Oct. 5, 2020, more than 25 sites had been assessed for potential development and five AHO developments were underway, according to the Community Development Department report. But the simple spreadsheet attached also noted in a “status” column that there were some projects by nonprofit developers Just A Start and Homeowners Rehab Inc. labeled “decided not to pursue,” and others tagged “offer rejected.”

“I’m really curious,” vice mayor Alanna Mallon said about the statuses. “I don’t think that tonight is the night to get into the whys.”

The designations jumped out at councillor Marc McGovern as well. Though he wasn’t sure how much information the nonprofits would be willing to share, he suspected there were still “some financial decisions that didn’t make [a project] viable” in some neighborhoods.

What was beneath the “decided not to pursue” and “offer rejected” statuses could lead to changes in the zoning to make it work better, they said.

The zoning is intended to eliminate design limits and hurdles for developers putting up buildings of 100 percent affordable housing – including in parts of the city dominated by single-family homes and so far lacking in affordable units. By allowing more density that brings a bigger financial return, developers of affordable housing should be able to compete better for buildable lots with developers of market-rate housing.

But also standing out from the study was how many projects fell within the overlay zoning by a kind of fluke, councillors said, or at least without meeting the goal of expanding into new neighborhoods.

“What we’re seeing is that they’re largely on existing properties, right? If you look at Jefferson Park and the property on New Street – that was sort of a happy accident,” Mallon said. Councillor Patty Nolan agreed, saying that while it was “heartening to see the number of units being produced, the reality is that even the New Street property was done before the AHO came in. It was a result of prior council actions.”

Those two projects were highlighted in the report as having completed the AHO community and advisory design review processes and being on the cusp of requesting building permits, at least once the final funding needed to begin construction has been secured, the report said. Jefferson Park Federal redevelops a former public housing development to end with 278 new affordable rental units. The development at 52 New St. is all-new construction that will put 107 affordable rental units next to Danehy Park – but in a neighborhood that already has significant affordable housing compared with other parts of the city.

A key aspect of the zoning was to see “geographic spread,” Nolan said, and it’s not yet happening.

The concern, and a focus on height and density, unfairly downplays the success of another aspect of the AHO, McGovern said.

“That these projects have moved forward as quickly as they have and haven’t been bogged down in red tape and legal opposition and things that we see in other projects is really the key point here,” McGovern said. “Yes, it is true that some of these projects were in the pipeline already, but they wouldn’t be at the point they are if they were not AHO projects.”

The council voted 9-0 to refer the report to the Housing Committee, run by city councillor E. Denise Simmons. She said a hearing would be scheduled as soon as possible.