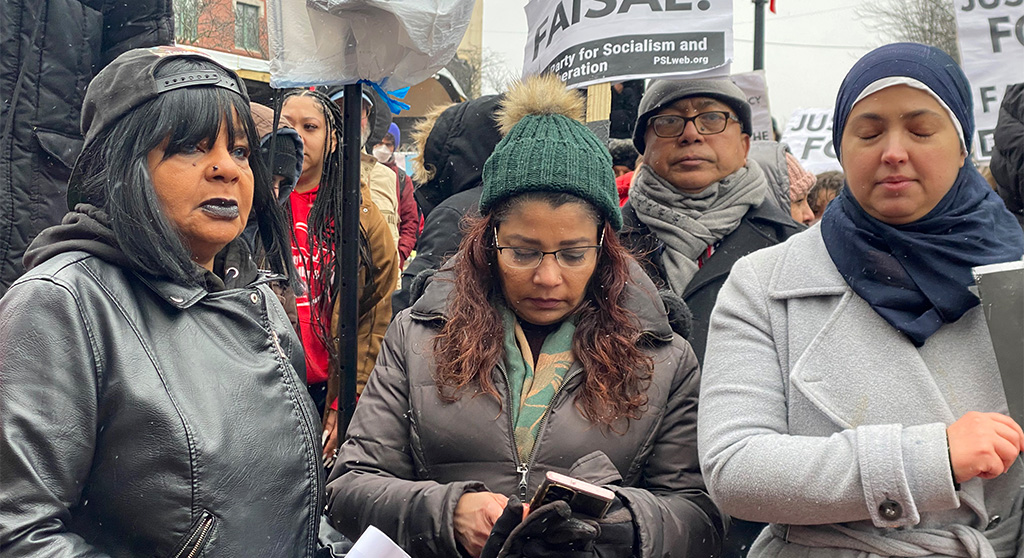 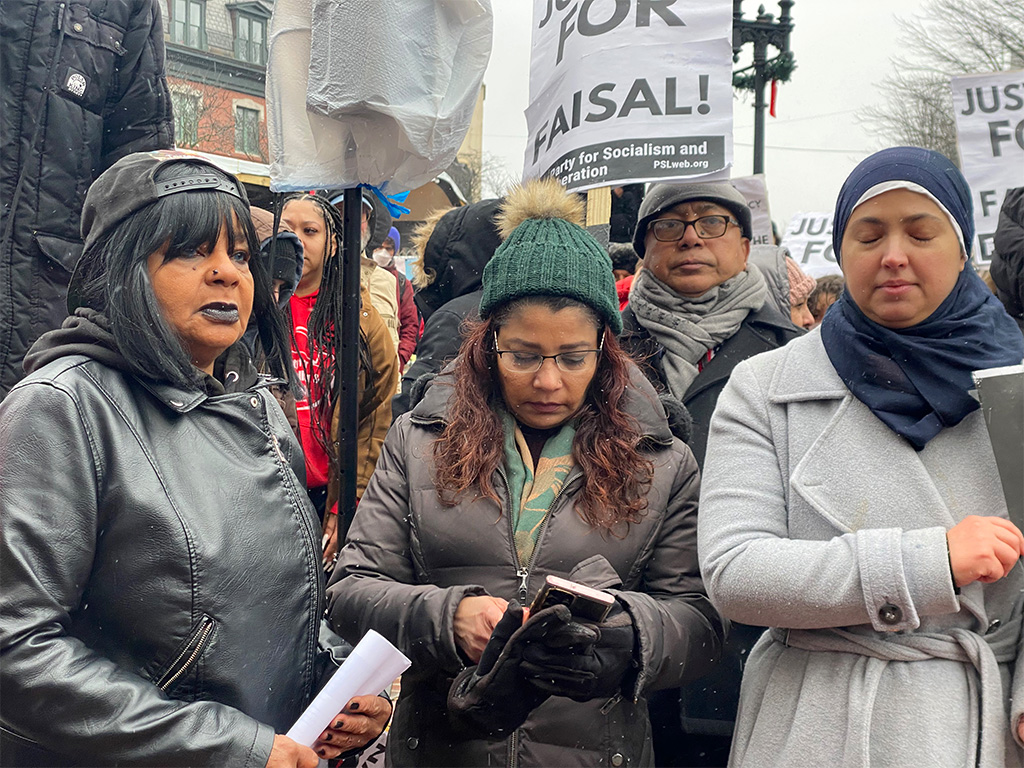 Complaints about a lack of police body cameras faded Saturday at a protest over the death of Arif Sayed Faisal, a 20-year-old in Cambridgeport, as attention shifted to the lack of an unarmed response for people experiencing mental health crises.

Faisal was killed by police Jan. 4 after a neighbor saw him outside his family’s apartment, cutting himself with glass and a large knife. In a narrative laid out since, a police officer – a seven-year veteran of the force – shot him after he ignored a nonlethal “sponge” round fired at him and moved toward police carrying the blade.

But speaker after speaker at a frozen Harvard Square protest that drew as many as 200 people said Faisal was no threat to the community and should have been talked down rather than shot at.

“I see a moment when someone of our community does what is right and makes a phone call for help when they see a crisis. And instead of being met with the care and the concern and the medical assistance that is needed, [it is] met by armed force,” said Nichole Mossalam, director of the Islamic Cultural Center of Medford and former executive director at the Islamic Society of Boston in Cambridge. “And a life is cut short in a hail of bullets. Is that right?” 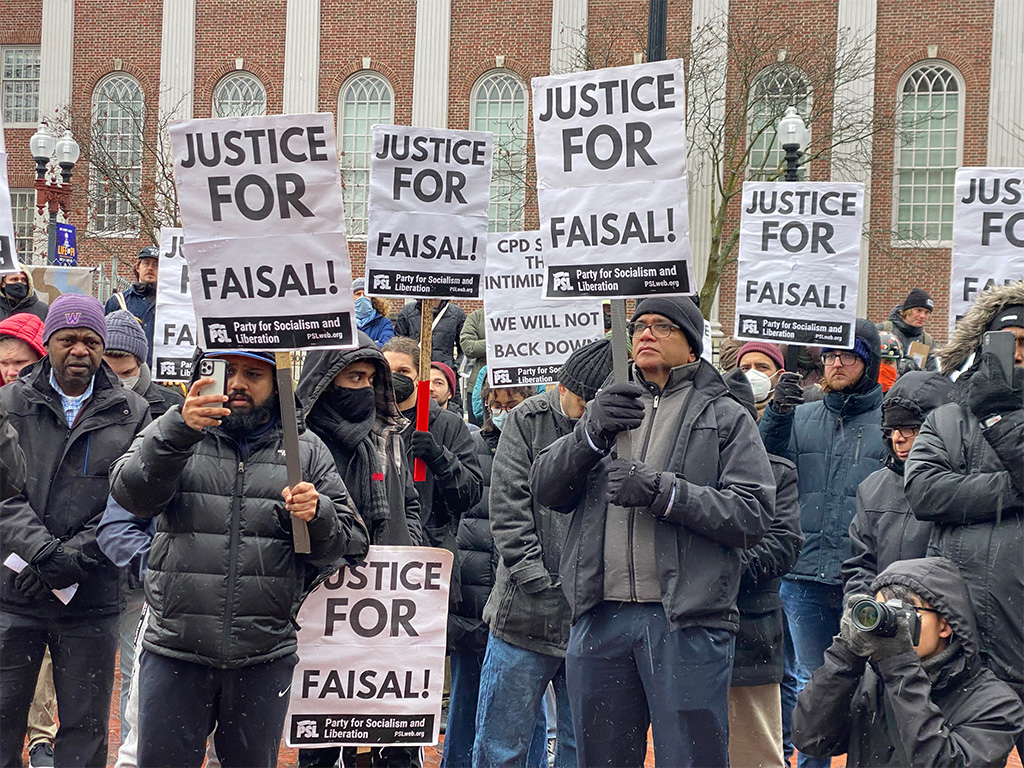 Another speaker at the event, which took place in spitting rain and sleet in 34-degree temperatures, was Hope Coleman, whose son, Terrence, was killed by Boston police in 2016 in another instance of people seeking help for people in crisis. Coleman said she called for an ambulance for her son, and was shocked when police arrived. “I said, ’I didn’t call for you all,’ and they said ’We’ll give it a try.’ I said no,” Coleman said. “They shot my son twice.”

In the summer of 2020, after the killing of George Floyd by Minneapolis police, alternative responses to armed officers were debated in Cambridge and led to dual proposals: one for an independent Holistic Emergency Alternative Response Team, conceived and to be run by citizens; the other was for a new city agency called the Community Safety Department.

A majority of the City Council supported $3 million in funding for the new municipal agency, which is due to begun operating next month or March, emergency services director Christina Giaccobe told members of the council’s Public Safety Committee in December.

Heart, meanwhile, was stymied in getting city money or a contract to begin work, but has continued to prepare independently.

At a meeting Thursday, City Manager Yi-An Huang told gathered community members that he had met with Heart three times since October and was coordinating an initial $300,000 contract with the organization. “We are certainly moving forward with funding [from federal Covid relief funds], and I think there’s strong support from the City Council for working with Cambridge Heart,” Huang said. “I’m actually looking forward to working with them [as] an alternative response that I think we really value.”

For some reason, the new Community Safety Department wasn’t mentioned at the meeting.

Amanda Rosanna, a responder for Heart, said at Saturday’s protest in Harvard Square that Faisal should have received an unarmed response such as her organization could provide – acknowledgment of a mental health crisis, empathy and support, instead of “a display of strength and power which results in the person running from crisis … if a skilled trauma-informed practitioner were called to the scene instead of police, Faisal’s behavior could have been fully deescalated with words.”

“We have trauma-informed tools and skills that we know how to use and yet we aren’t allowed to use them,” she said, criticizing the city for taking three years to begin offering funds while increasing the police budget to $73.5 million from $63.4 million in 2020. “The fact that many city officials have dragged their feet and dismissed the community call for an alternative has led to the killing of a young person from our community.” 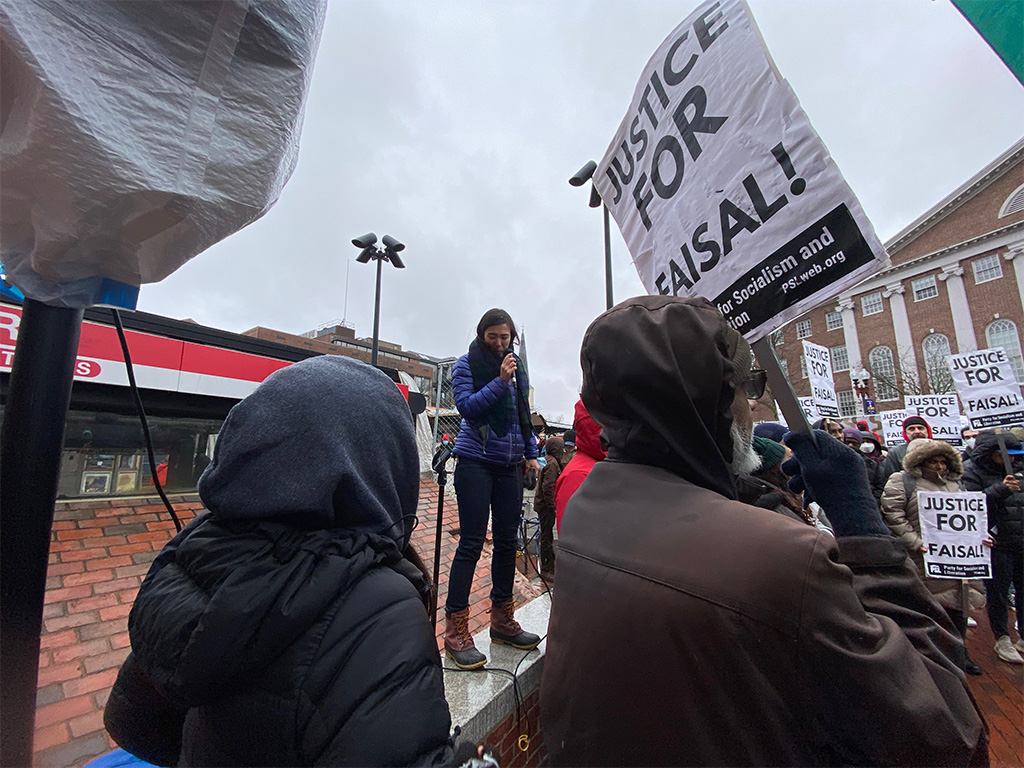 The protest drew state Reps. Mike Connolly, who serves parts of Cambridge and Somerville, and Erika Uyterhoeven, who serves Somerville – where Faisal attended high school, graduating in 2020 before moving on to study computer engineering at the University of Massachusetts, Boston.

Connolly urged funding and city support for the Heart program, which was “contemplated as part of the way to respond to a crisis such as this.” He called Faisal’s death “particularly outrageous” after years of conversation with Heart and a focus “on armed response to mental health crises and wanting to ensure that when people are in a moment of crisis, it’s not a death sentence. Despite all of the efforts, despite all of the conversation, despite all of the pronouncements, Faisal lost his life.”

Uyterhoeven recalled that she ran for office in the aftermath of Floyd’s killing, amid conversation about defunding police. “I watched how that was acceptable for about two months, and how the following year it became something you can’t say anymore,” Uyterhoeven said. The killing of Faisal showed why the concept retained value even locally, where she said she was “sick and tired of hearing ’Look at what a progressive community we are here in Cambridge or Somerville’ … I can’t tell you how often I’ve heard our police are different. ‘We’re different here. We have community police.’”

“It’s bullshit,” Uyterhoeven said, calling for the abolition of “prisons and policing that is not public safety.”

Throughout the protests over Faisal’s death there have been calls for police body cameras and criticism that Cambridge officers don’t wear them, because they might provide objective evidence of what took place Jan. 4 immediately before shots were fired. Those calls began to be deemphasized Thursday with a public comment that sounded like Cambridge city councillors’ concerns in instituting an anti-surveillance ordinance in 2018.

Husain Rizvi, of the Muslim Justice League, said that funding police body cameras would be giving them “a shiny new toy for killing one of our own” and result in “so much footage of us and our community members on the street who don’t have investigations on us, which would be held in their servers.”

In the weekend protest, body cameras were deemphasized again, this time by Mossalam.

“Body cams are great. They’ll give us answers, because we want answers. But what do we really want? What is the core of our issue?” Mossalam said. “Justice. We want change, and no more criminalizing of mental illness.”

No charges or discipline are seen to await officer from shooting, making release of name unlikely