In video from candidate for state rep, Chomsky seems to answer controversy 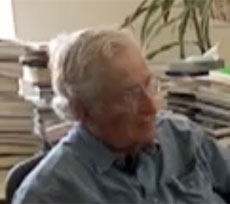 In video from candidate for state rep, Chomsky seems to answer controversy

While Democratic state Rep. Tim Toomey had more endorsements to tout in the final days of his race for reelection in the 26th Middlesex District, independent challenger Mike “No Money” Connolly let one of his endorsers answer for him in a controversy sparked in a Tuesday debate.

When Republican candidate Thomas Vasconcelos asked about the details of Connolly’s “No Money” pledge during the debate, calling it “a gimmick” and being quickly echoed by Toomey, Connolly said it was only as much a gimmick as any effort to get attention for a cause. While he wants money out of politics, the example he chose of another attention-getting effort for a good cause — Rosa Parks’ civil rights-era refusal to move to the back of the bus — proved provocative.

While neither opposing candidate responded, Toomey supporters online have leaped on the quote, and The Cambridge Chronicle blog reposted a one-minute, 29-second YouTube video clip bearing only the headline “Cambridge state rep candidate compares campaign to Rosa Parks ‘gimmick.’” (The editor of the Chronicle, Scott Wachtler, resigned for personal reasons before the video went up. It was posted by a metro editor at the Chronicle’s parent company, former Chronicle editor David Harris.)

Noam Chomsky did respond, though, in a war of YouTube videos made all the more interesting by the fact the Massachusetts Institute of Technology professor made his comments Aug. 15, a full two and half months before Connolly debated.

The video, taken as Connolly talked formally with Chomsky before accepting a giant check for zero dollars — the candidate’s website has a button anyone can push to “donate” zero dollars — shows Chomsky talking at length about the effect of money on politics before Connolly says, “If this campaign succeeds, others will see it as an example.” He has accepted $632 in donations of campaign materials, with $382 of it coming from his campaign manager; Toomey, he has noted, has taken in $35,338, all as straight donations of money.

“Probably a large majority of people would agree [getting money out of politics is] what they want. And if they see it’s possible — like we don’t just have to give up — it could take off. That’s the way things start,” Chomsky said in the video.

“Take the civil rights movement,” Chomsky said. “It has a long history, but the modern civil rights movement really took off in 1960 when a couple of young kids from a black college sat in at a lunch counter. Of course they were arrested and brutalized, and that could have been the end of it. But instead a couple more kids came in, and pretty soon [we had] the Freedom Riders and registration and the March on Washington. The women’s movement was exactly the same. It began with women talking to each other in small consciousness-raising groups and before too long it had [brought on the] biggest change in the country and in fact the world in the modern period.”

Chomsky, as the author of dozens of books on U.S. foreign policy and a column for The New York Times News Service, is known for his political beliefs as well as for his work in linguistics. Connolly has posted three clips from their Aug. 15 talk.

The clip in which Chomsky talks about the civil rights movement ends with him posing for a picture with Connolly, his fiancée, Kacy Karlen, and the giant check.

Connolly’s biography says he was born in Dorchester and raised in a low-income public housing project in Norwood after his parents divorced. At age 16, he was offered a full athletic scholarship to Duke University and later went to Boston College for a law degree. He explained after Tuesday’s debate that he felt “inspired” by the leaders of the civil rights movement.

On Thursday, Toomey announced his endorsement by U.S. Rep. Michael Capuano, a former mayor of Somerville. The 26th Middlesex District includes parts of Cambridge and Somerville.

Toomey is on the City Council in Cambridge, and Connolly has said during public debate that residents of Somerville have felt slighted by the dual demands on Toomey’s time and possible tilt toward his hometown. The response by Capuano, who serves Somerville as U.S. rep for the 8th Congressional District, seems to address that.

“Whether it’s putting union construction workers back on the job in North Point, co-sponsoring last session’s transgender rights bill, or diving into the details of transportation policy, Tim gets up every morning and works hard for Somerville and Cambridge,” Capuano said. “He was a progressive before it was fashionable to be called ‘a progressive,’ and he’s never been afraid of standing up to powerful special interest groups. I’ve worked closely with Tim for the last 20 years, and I can tell you that he’s a rarity in politics: a lifelong public servant whose only ambitions are to make life better for the people in his district. The people of Somerville and Cambridge are lucky to have him as their representative on Beacon Hill, and he has my full and unreserved endorsement in this year’s race.”

In addition, on Friday the incumbent reminded voters he had the endorsements of the mayors of both cities.

“Rep. Toomey gets how cities work. He understands both the challenges and the opportunities of running a city like Somerville, and I’m grateful for his tireless advocacy and rock-solid leadership in the State House,” said Joseph Curtatone, mayor of Somerville.

The candidates first debate for the Nov. 6 election was held Oct. 17 in Somerville. The video from that debate: