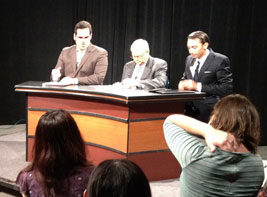 Medical marijuana, transgender inmates, reproductive rights, immigration policy and a crumbling overpass in Somerville all got a hearing Tuesday at a three-way state representative candidates’ debate for the 26th Middlesex District, but it was issues of campaign finance, clean elections and legislative corruption and efficiency that got the most attention.

Independent Cambridge challenger Mike Connolly and his “No Money” campaign pledge was a beneficiary of the interest as well as a target, as he had a ready response for citizens’ questions in the debate’s second segment but had to explain and defend his pledge when the third segment rolled around with direct questioning from the other candidates: Democratic incumbent Tim Toomey, also of Cambridge, and Republican Thomas Vasconcelos, of Somerville.

The district includes parts of Cambridge and Somerville.

The 90-minute debate followed the format of the candidates’ first meeting, held Oct. 17 at Somerville Community Access Television in Union Square, and even had the same moderator in Joe Lynch, host of the channel’s “Greater Somerville” show. This one was hosted at Cambridge Community Television in Central Square and broadcast live on the city’s cable Channel 8. With only some 20 audience members fitting into the studio during filming, members and supporters of the three campaigns watched from a neighboring restaurant.

Like the first debate, this one had opening statements; unlike it, there could also be closing statements, as Vasconcelos gave briefer, more measured responses than in his first outing and Lynch kept tighter rein over candidates in the third segment.

“I’m not going to let it happen, what happened at the Somerville debate,” Lynch told the candidates. “Be cognizant of the fact we have a time limit.” But he also pointed out that the direct questioning — asked for by Vasconcelos when the campaigns decided on formats and led by him each night — was “the fun part” and that, with the Scott Brown-Elizabeth Warren debate for U.S. Senate canceled, “the eyes of Cambridge and the state” were on the 26th.

The first 15 minutes of “the fun part” was about Connolly’s “No Money” pledge.

“This is supposedly the foundation of your campaign. However, I have identified a few troubling cracks in that foundation … really one major concern,” Vasconcelos said. “I was going through pre-election reports that were filed to the Office of Campaign and Political Finance and discovered that two individuals actually donated the combined total of $632.19. Don’t you think you’re misleading voters with your ‘no money’ pledge when you’re accepting contributions … and I know they’re not actual U.S. dollar amounts, they’re in-kind contributions, but you’re still receiving contributions.”

Toomey added that he thought Connolly was being “somewhat disingenuous” with his pledge and wanted to know “Who’s behind the curtain?”

The candidates have had two reporting periods — pre-primary, stretching from the start of the year to Aug. 19; and pre-election, starting Aug. 20 and ending Oct. 19. In the two periods:

“There is the letter of the pledge, and that is I don’t accept any cash — any money — but then there is a spirit to what I’m doing, and for the people involved in the campaign, it’s the spirit that really attracts them. You’re right, $600 in cash, $600 in palm cards and signs, that doesn’t really make a huge difference. But there is a genuine spirit, and it really matters to people,” Connolly answered his opponents. “The reason I’m getting attention is not me, it’s not because of in-kind contributions versus cash contributions, it’s because people are hungry for an alternative to the status quo.”

He also noted that his approach was made clear from the start, pointing to the first media coverage he got — a June 21 article in The Cambridge Chronicle that explained “Connolly said he is not accepting any money and is instead spending roughly $50 per week out of his own pocket. He is accepting services-in-kind.” 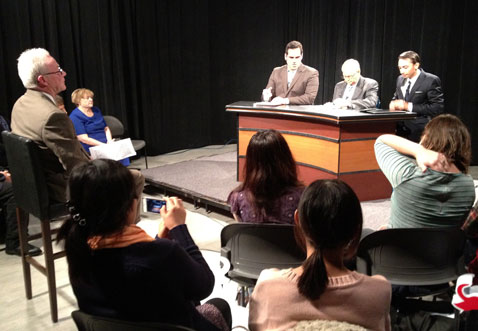 Candidates for state representative in the 26th Middlesex District are caught in the glare of spotlights at Tuesday at Cambridge Community Television while they are moderator Joe Lynch prepare for a debate. (Photo: Marc Levy)

Several times during the debate Vasconcelos said he agreed with Toomey on various issues, and they were united again in critiquing Connolly’s pledge: Each called it “a gimmick.”

Connolly conceded it was a gimmick, in that it was a ploy to draw attention and support for a campaign that would spend a “fraction” of what a veteran campaigner such as Toomey would spend. “There is a marketing element to it, but it is also grounded in substance. Take Rosa Parks. When she refused to get out of her seat, in some ways that was a gimmick. If she really wanted the bus to take her where she was going, she would have gotten up and moved when she was asked,” Connolly said. “She was trying to make a point.”

“If you listen to what these guys are saying, they make it sound like I’m some kind of swindler,” Connolly said.

The other candidates protested, saying that wasn’t their intention.

Toomey protested again after Connolly said donations to charities from the Toomey campaign — to Little League teams or religious festivals, for instance — could also be a form of advertising, especially when signs identify “state Rep. Toomey” as the source of funds. “I don’t look for recognition or attention. I do those because of the values instilled in me by my family,” Toomey said. “I don’t want anyone to think that I have a sign I put up there.”

“Most of what he said was inaccurate,” Toomey said of Connolly, noting the law’s use in an election that “proved it really didn’t work, and in 2002 voters repealed that law by a 3-to-1 [ratio]. It was the voters who actually repealed that law when all was said and done. It was an amendment in a state budget from the Senate to not put the money in there, and I had to vote against it — if I’d voted against that amendment, I would have voted against the whole budget, and that would have meant no services for any citizen.”

That doesn’t reflect the situation as described by The Phoenix or the state chapter of the nonpartisan, nonprofit advocacy organization Common Cause. In a summary of the issue pointed to by Connolly after the debate, the group put the blame on Toomey’s legislative body, the House, and its leader Tom Finneran, who “raised over $700,000 from corporations to defeat it [via a] deceptively worded advisory referendum.”

Toomey pointed out that he tried for a cap on spending, such as a limit of $50,000 for a race for state representative or $125,000 in a race for state senator, as well as a cap on donations from people and unions of $100 apiece.

“Everyone is for clean elections, there’s no question about that at all,” Toomey said.

Vasconcelos reminded watchers of his libertarian roots several times during the debate, including his belief that government should not be using taxpayer money to pay for campaigns. “Individuals such as Rep. Toomey are perfectly capable of raising their own funds,” he said.

An educated populace could vote out the politicians it didn’t like, he said, which is why “the best way to tackle reform is full transparency. A lot of times money is shifted around and we don’t know exactly who is donating to who.”

During a part of the debate not related to campaign finance, Connolly told Toomey he was hearing from constituents “concerned you’re pro-life” and asked about his endorsement in 2010 by Massachusetts Citizens for Life, a group that describes itself as “pro-life” and says “Ending legal abortion is the centerpiece of the pro-life agenda.”

First of all, I have a zero percent rating from Massachusetts Citizens for Life, so once again Mike, you’re incorrect. I think everyone knows my position on this — that I am personally opposed to abortion. But in the 20 years that I have been at the State House there has not been one vote to limit or restrict abortion rights taken by myself. My position in the legislature has always been to minimize the number of unwanted pregnancies that occur in Massachusetts. And to that end, I voted for the three bills Naral has called its legislative victories of the past 10 years. I voted for all three: to require insurance companies to cover contraception, to allow over-the-counter access to Plan B and to create buffer zones around reproductive health clinics so women going in there for services are not harassed. And right now I’m co-sponsoring two bills that are supported by Planned Parenthood: comprehensive sex education, which I’ve always supported … and safe pregnancies for incarcerated women. Over the past years I have sponsored and secured increased funding for family planning agencies throughout the commonwealth and have several awards in recognition.

“I think I have a zero rating from Massachusetts Citizens for Life and from Naral. I do not respond to their questionnaires,” Toomey said.

However the pro-life group gathered its information, and while it may be in opposition to Toomey’s record on Beacon Hill, Connolly appears to be right about how the group ranks Toomey. In its 2010 ratings recorded by Project Vote Smart, Massachusetts Citizens for Life awarded Toomey a 100 percent; in a PDF election guide for the current race, it says Toomey is pro-life and Connolly and Vasconcelos are “anti-life.”

In the current Naral Pro-Choice Massachusetts voters guide, Connolly and Vasconcelos are listed as “pro-choice” but not endorsed and Toomey is listed as having a “mixed” record, which it defines as being a candidate who “supports a woman’s right to choose with certain restrictions.”