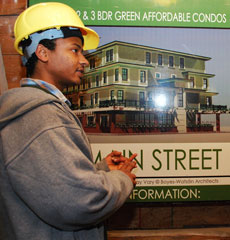 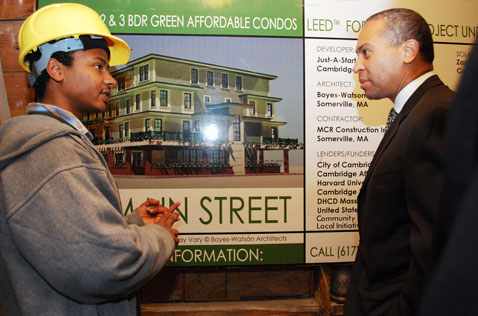 A hearing into home rehabilitation programs prompted testimony with a lot of happiness and a little horror Wednesday, with some homeowners praising Just-A-Start and Homeowners Rehab Inc. as giving stellar results, service beyond the call of duty, more mortgage relief than was asked, calming and counseling and “amazing care, [like] a family member.”

But Craig Kelley, the city councillor running the Public Safety Committee meeting, had stories of renovation problems dating back 16 years to when he was a leader of the North Cambridge Stabilization Committee, as well as a handful of recent anonymous e-mails and the attendance of  residents who were still emotional over damage they said the agency had caused at their homes.

Loretta Haynes told of checking in daily on her parents’ home on Upton Street for eight months while work was being done through Just-A-Start contractors, only for walls to go up without insulation – causing a frozen water meter and flooding two years ago – and sewer, heating and air-conditioning problems. She went to a neighbor’s home to look at her own roof and discovered an $8,000 compressor was simply never installed. One contractor disappeared without doing work, but with her money, she said. Her mother, who’d been reluctant to take out a mortgage to pay for work on a house that had been paid off for years, had to take out a second mortgage for $14,000 to fix problems from the first round of construction. 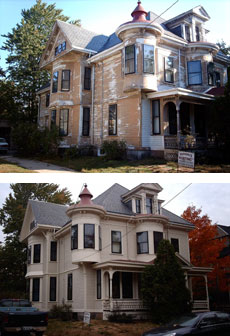 The Facebook page of Homeowners Rehab Inc. shows some of the work it does as before-and-after photos. (Photos: HRI)

“She talked about it to her last day, how she hated to leave me with that burden,” Haynes said. “It tore my mother up so much that she went to her grave thinking about that instead of pleasant things. If Just-A-Start had done its job, that wouldn’t have happened.”

Roseanne Gilmer of Rindge Avenue had a complaint about HRI, in part, she said, because the agency told her she must start with Lead-Safe Cambridge, putting her out of her home as painting and window and door replacements were done wrong. In her house, as well as Haynes’, walls went up without insulation, she said. “I could go on for hours.” She complained of having to pay more to have bad work corrected over the course of four years after doing the contracting herself, crediting the agency with doing good roofing and landscaping but otherwise botching the work it oversaw. “All I wanted was my work to be done right,” she said loudly.

While eight homeowners were called to speak in favor of the agencies, only two had criticism to share.

A prominent but silent presence in the room was Shirley Graham, a Kinnaird Street resident who has taken Just-A-Start to court after a contractor’s attempt to fix her sinking foundation put her home “in imminent danger of collapse,” according to a structural engineer she brought in, and cost her the ability to rent out two floors of her triple-decker for income.

“It is unfortunate that occasionally things go wrong. It is certainly something we’d like to avoid in any way possible,” said John Hixson, a board member of HRI for three decades. “We’ve helped hundreds of people stay in their house.”

Money on the table

Chris Cotter,  housing director at the city’s Community Development Department, agreed the programs were key to helping especially lower- and moderate-income residents keep “living in very valuable homes they’d otherwise be forced to sell.” And he noted the increasing struggle to keep the programs active as federal money, including the Community Development Block Grants that make up so much of the funding, “has been declining pretty precipitously in recent years,” a situation that could worsen with Congress’ so-called sequestration agreement.

Actual figures were in short supply, though. Cotter said that in the past five years more than 200 households had received funding for the Home Improvement Programs, but he didn’t have a dollar amount beyond knowing the average cost of a job was $25,000. When pushed by councillor Minka vanBeuzekom, Cotter added that the city’s commitment of block grant funds was just under $600,000 for each agency’s loans and overhead expenses. Kelley calculated that the average mortgage held by Just-A-Start was $51,047, making for more than $5 million in mortgages since 2002 – with the highest-value mortgage being $297,000 and the lowest being $1,800.

Peter Munkenbeck, a Just-A-Start board member and Cambridge lawyer, said that over the past two decades his agency had served more than 500 owners and 900 units of housing for $14 million in construction financing – or more than $700,000 a year. Just-A-Start’s current portfolio is about $4.5 million, he said.

“So there is certainly a lot of money on the table here,” Kelley said.

The exploration of finances made up little of the hearing, though. Much of the councillors’ time was spent on how the agencies did their rehabilitation work and ensured quality – and what could cause the occasional horror story such as those told by Haynes, Gilmer and Graham.

Explanations of the contracting, oversight and inspections process were given by Cotter; Cambridge Commissioner of Inspectional Services and Building Commissioner Ranjit Singanayagam; Bob Costa, senior project manager for HRI; and Munkenbeck, who explained how the agency is approached by people with often serious problems in their home and provided loans to be paid back at from zero to 3 percent interest. (In exchange, the agencies become holders of homeowners’ mortgages, which Cotter noted serve as liens.)

“The rehab specialists work directly with the homeowners and the homeowners in turn are responsible for hiring the contractor,” Munkenbeck said. “The homeowners do not authorize payments until they are satisfied that the work that’s been done in their unit has been appropriately addressed.”

The agencies use smaller but licensed and insured contractors with proven track records, the officials said. When a license is taken from a contractor, the city is notified, Singanayagam said.

Costa clarified that contractors can’t be paid by his agency until work is done and the owner is satisfied, and that his rehab specialists might hold back 10 percent of a contractors’ pay to ensure final touchups are done. In addition, while the officials insisted the agencies are not the general contractor for rehab jobs, Costa said his rehab specialists were “on site daily to check on the progress of the work and to make sure that the contractor is following specifications.” How the specialists report those daily checks is up the individual, though.

When Kelley asked how the agencies handled a dissatisfied client, Cotter and Costa said the issue would be “addressed.”

“I’m at a loss, how with all this oversight how the stories I’ve heard over the past 16 years can happen,” Kelley said. “I’m struggling to see how it can happen with a general contractor on site and daily visits [from rehab specialists].”

There would be further hearings to find out, Kelley said. By the time they are held Graham’s case might be resolved and people on all sides of the matter could feel more free to talk about its origins and outcomes – and how to prevent court cases from resulting if future clients respond to a disastrous round of repairs as Graham did: by refusing to let the same contractors who caused problems keep working on her house to fix them.

Another question that could be answered – neither Just-A-Start board members, officials or lawyers would do so when asked after the hearing – is what the agency intended to do with Graham if she accepted a mediation offer of $43,000 that meant surrendering the mortgage on her home. Graham and her lawyer began the case on March 30, 2009, by asking for a temporary restraining order against foreclosure, which a judge granted indefinitely April 10, 2009, while the case was in mediation –  rejecting Just-A-Start’s request not to grant the injunction.

“Throughout its history, Just-A-Start has never foreclosed on any loan,” Munkenbeck said.