Instead of foreclosure, homeowner in bad-repairs case gets fresh start in court 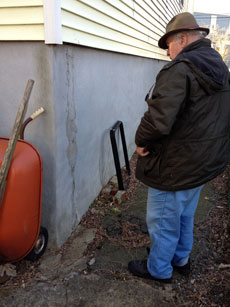 Instead of foreclosure, homeowner in bad-repairs case gets fresh start in court

Richard Clarey looks at the base of Shirley Graham’s home on Kinnaird Street to see if a crack resulted from bad repairs to the home’s foundation. (Photo: Marc Levy)

A homeowner’s fight against foreclosure and the agency that damaged her home with bad repairs will pick up again in a month – with the homeowner represented by a new attorney.

A lawyer for the agency, the Just-A-Start Corp., said he accepted the continuation of the case for 30 days, but asked Superior Court Justice Kimberly S. Budd to bar the public from future court dates.

Budd didn’t answer immediately, and Just-A-Start faces another, different kind of public hearing in the meantime: City councillor Craig Kelley has scheduled a Jan. 16 hearing of the Public Safety Committee he chairs to look at Just-A-Start Corp., a similar agency called Homeowners Rehab and “alleged substandard work” done with state and federal money funneled to them by the city. Kelley and fellow councillor Minka vanBeuzekom have been alarmed by several allegations made against Just-A-Start and HRI, including an active case on Upton Street, and the city’s ties to them.

None of this was known New Year’s Eve, when a court appearance seemed to end badly for Shirley Graham. Budd told her a mediation agreement she signed would go into effect, likely costing her the triple-decker she owns at 48 Kinnaird St. as Just-A-Start foreclosed. But the judge reconsidered the same day and ordered the sides back to court in Woburn for a Friday hearing.

“Upon further reflection, the court finds that a further hearing is necessary in the interests of justice,” said Budd, alerted to questions in the case by an outburst Monday by city attorney Richard Clarey.

As the case seemed to be wrapping up Monday with Graham and her lawyer, James P. Keane, largely silent, Clarey stood from the back of the court to say Graham had been coerced.

“They’re taking advantage,” Clarey said. “She never saw the papers they’re dragging her in today to sign.” He said Friday that he’d never done such a thing before, but couldn’t bear to stay silent.

Graham also spoke up, saying “I’ve told Mr. Keane over and over again I didn’t want to sign.”

Budd told Clarey he was not allowed to speak – she’d already denied Kelley’s request to speak – and at first indicated that with papers signed, there was nothing she could do for Graham.

“I’m sorry it didn’t work out the way you hoped it would,” she said.

Yet she did call the sides back in, mainly to accept Keane’s resignation as Graham’s lawyer and grant the 30-day stay. That gives Keane time to transfer his case files to the next attorney and for Graham and her new lawyer to confer. The lawyer taking up the case is Dennis A. Benzan – a childhood friend of Graham’s son – of the Cambridge firm Altman & Altman.

Benzan told Graham to start by getting new estimates of what it would cost to fix her home. She brought Just-A-Start in to correct her home’s sinking foundation in 2005, a $40,000 job that ballooned to $75,000 in loans secured to the agency by her own mortgage. A structural engineer says the home has been “in imminent danger of collapse” since the repairs, and one estimate in February put the cost of correcting the problem at $65,938. Benzan wanted to be sure an estimate included the cost of getting the home’s two rental units back in shape; Graham hasn’t been able to earn income from them for about seven years.

“This has been a long time. It’s taken a toll,” Graham said.

Keane, of Charlestown firm Keane, Klein & Duffey, declined to say after court why he was withdrawing from the case, but said Graham was free to speak. She said Keane had claimed a “conflict of interest” after Clarey spoke up at the previous court date, although it was not clear what he meant.

Keane had encouraged a $46,000 settlement from Just-A-Start on a home assessed at $653,400, Graham said. The new attorney’s move suggested a more aggressive stance.

Clarey, vanBeuzekom and others who have been following Graham’s case were surprised by Budd’s reconsideration, but Clerk of Courts for Middlesex County Michael Sullivan said the justice had made the decision on her own, and that such actions “are not unheard of” from judges in either civil or criminal cases.

“They want to take everything into account,” Sullivan said.