Judge halts foreclosure, orders homeowner and agency back to court ‘in the interests of justice’ 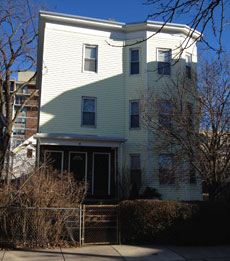 Judge halts foreclosure, orders homeowner and agency back to court ‘in the interests of justice’

In a quick courtroom hearing Monday, it looked like Shirley Graham had no legal options remaining and would lose her home of 41 years on Kinnaird Street. But on Wednesday, Graham learned that Superior Court Justice Kimberly S. Budd had ordered her and the Just-A-Start Corp. back to court for a further hearing Friday.

“Upon further reflection, the court finds that a further hearing is necessary in the interests of justice,” Budd said.

Just-A-Start, based at 1035 Cambridge St., is a nonprofit, tax-exempt community development agency that does housing rehab using loans made from state and federal money. The money is funneled through the city, which promotes the agency aggressively, two city councillors said Friday.

The loans are secured by a homeowner’s mortgage. As of Friday, it looked like Just-A-Start would use its position as mortgage holder to throw Graham out after a dispute in which the agency’s 2005 repairs made her triple-decker home’s foundation worse rather than better.

Graham said Monday in court that she’d been tricked into signing the releases and mediation forms that would allow Just-A-Start to foreclose on her $653,400 home for a settlement of $43,000.

The judge had seemed to ignore the claims Monday in court, but her order later that day showed otherwise.

Alan LaBella, deputy director of housing at Just-A-Start, did not answer messages left Monday after court.

Graham’s lawyer, James P. Keane of Charlestown firm Keane, Klein & Duffey, will try to withdraw from the case, leaving her to represent herself, said attorney Richard Clarey, who has been helping Graham with her case.