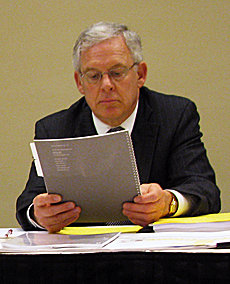 Chris Bator, a federal prosecutor since 1990, is co-chair of the Legal Committee for the Cambridge Redevelopment Authority. (Photo: Marc Levy)

The Cambridge Redevelopment Authority is due to receive a report from special counsel at a May 15 meeting, said Kathleen Born, chairwoman of the authority’s board.

The minimum that the Boston law firm Donnelly, Conroy & Gelhaar has been doing since being appointed by the board Nov. 5 is looking into the personal finances of Joseph Tulimieri, who was executive director of the authority from 1982 until his forced resignation Sept. 27. The five-member board, all of whom became active in April 2012 after a 32-month “quiet period” with zero board activity, had identified irregularities in how Tulimieri assigned himself salary, bonuses, part-time wages and retirement compensation.

In a Nov. 20 article in the Cambridge Chronicle, Born is quoted as saying the law firm had an open-ended budget starting at an estimated $65,000 and a charge to “examine whether salary increases and other benefit enhancements received by the former executive director were properly authorized.” The Chronicle’s Erin Baldassari reported that Born “did not say if the probe would look deeper.”

Two of the authority’s most faithful citizen participants said they would be disappointed, to say the least, if the Donnelly, Conroy & Gelhaar report was limited to looking at whether Tulimieri gave himself money improperly.

“If we get a whitewash, I’ll be furious,” Kaiser said. “I would have expected a lot more.”

While answers may come May 15 on that point, Hoffman echoed Kaiser in saying “people assumed there would be a real look at things, not whitewash No. 2.”

City Council candidate Tom Stohlman was more cautious in assessing whether the authority board had implied an independent counsel would look at anything more than Tulimieri’s own pay package.

If the report is limited to Tulimieri’s pay, though, there remain many questions about what Tulimieri was doing during that 32-month “quiet period”; whether anything he did during that time was legal; and why the authority’s longtime counsel, Foley Hoag, didn’t do anything about it.

Bylaws and the board

Tulimieri didn’t have responsibility for appointing members of the board; City Manager Robert W. Healy has that power for four members, with the state having authority for the fifth. But over the years board members have been allowed to stay past the end of their terms whether they retired, resigned or moved away.

The state appointed Barry Zevin as its member Sept. 27, 2009, and then-city clerk Margaret Drury – now a board member herself – swore Zevin in on Oct. 23, 2009, and told the state so in a letter dated four days later. Through a quirk of the process, Zevin’s term technically expired a month later. As he’d been told he would be contacted to take part in board activity and never was,  he assumed “somebody else had been appointed,” he said last spring.

Although Tulimieri was told by the state Zevin had been appointed and was used to working with board members whose terms were technically expired, he never contacted Zevin, basically signaling the start of the “quiet period” with Tulimieri as a one-man authority. The former executive director has also claimed no action on trying to correct the lack of board members. When asked in March 2011 how the authority was doing business, Tulimieri said the board had three members – enough for a quorum – even though he was in the midst of his 30th consecutive month without a board meeting.

Monthly board meetings are required by the authority’s bylaws.

When the rooftop garden deal benefiting Google drew attention, the situation finally came to an end. Zevin was activated and Born, Bator, Drury and final member Conrad Crawford were appointed and sworn in.

According to current authority counsel Jeffrey Mullan, “the bylaws are pretty clear [that power] does lie with the authority,” but it is not clear that then-counsel Sandra Shapiro took any steps to ensure Tulimieri was following the bylaws either in acting under orders of the board members; calling meetings of the board; or seeing that either of those bylaws were literally possible.

Residents were united in calling Shapiro and Foley Hoag’s involvement in the look-back report a conflict of interest.

“You have legal counsel writing a report on its own activities,” Stohlman said, followed by  Hoffman calling it “such a colossal conflict of interest,” Carol Ballew saying that, “if anything, I’d have expected an independent review,” Michael Brandon asking for “outside counsel at the very least and possibly even with law enforcement authority” and Charles Teague summing up that “it’s clear bad things happened. Unfortunately, it’s clear the bad things continue.”

The “look back” at the 32-month “quiet period” had been promised in July, with Born saying the review would “evaluate whether appropriate votes and procedures were taken during that time and followed in the absence of a full quorum.”

The board accepted the report in September. Although members of the public were appalled and numerous shortcomings were cited, Born said the report “was exactly what we expected and very well done, and I would like to congratulate counsel on it.” It was labeled a “final report,” although members of the board took pains to assure the public that their plan was to accept the report and likely discuss it over the course of several meetings, with Born saying “it wasn’t just whipped off as ‘accepted’ tonight.”

I want to assure members of the public that if the board has any reservations or worries about this, we can always ask for an independent review. But right now this is definitely the place to start. This law firm knew the material better than anybody else. It may be all the board decides we need and it may be a beginning, but we needed this context in order to begin to have this discussion about whether there was anything that needed to be remedied or redone or not.

Discussion of the report appears on no agenda since its acceptance. Nor has there been off-agenda discussion by the board to the best recollection of the most frequent attendees of board meetings.

Tulimieri resigned the same month that the report was accepted, and the announcement of an independent counsel accompanied his departure.

An independent counsel report May 15 on “whether salary increases and other benefit enhancements received by the former executive director were properly authorized” will beg the questions: If salary and benefit actions Tulimieri took on his own weren’t properly authorized, how could the actions he took alone on development in Kendall Square be properly authorized – especially since Foley Hoag has said “actions taken in the absence of a quorum do not survive”? If they were proper, where is the documentation or precedent showing it? If they weren’t, why didn’t Foley Hoag take action?

The board meets at 5:30 p.m. May 15 in first-floor community room of Cambridge Police Department headquarters, 125 6th St., near Kendall Square.