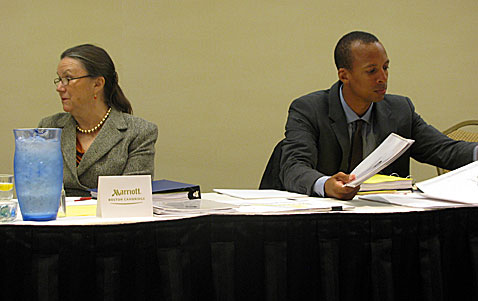 After seven members of the public expressed disappointment and some alarm in a legal review delivered at Wednesday’s meeting of the Cambridge Redevelopment Authority, the five members of the authority’s board surprised them by calling the review an “excellent starting point” and exactly what had been requested.

“It was exactly what we expected and very well done, and I would like to congratulate counsel on it,” board chairwoman Kathy Born told Jeffrey Mullan and Sandra Shapiro of the law firm Foley Hoag.

The members also took pains to assure members of the public that their plan was to accept the report and likely discuss it over the course of several meetings, with Born saying “it wasn’t just whipped off as accepted tonight.”

But much of the talk during the board’s look at what was called the “final report” was about issues public comment largely ignored, such as a lengthy, detailed discussion of the ramifications of extending the Kendall Square Urban Renewal Plan for a short time or long time. The people speaking during public comment, including the writer of this story and two critical analyses of the Foley Hoag report, assumed the lawyers who wrote the report and board members who assigned it were interested in understanding how the authority could have found itself as it was in the spring: having had no active board members for more than two years.

During that time, executive director Joseph Tulimieri presented a controversial project to the City Council with developer Boston Properties, and it was described as coming from the Cambridge Redevelopment Authority. The City Council voted for the project 7-2 in March, followed by the city manager bringing forward four board members; the fifth, appointed by the state, was confirmed as still being on the board although he had never been contacted to appear at a meeting and believed he was no longer a member. All told, Tulimieri went two years and eight months taking actions without a board despite bylaws saying his role was to administer a board’s plans. The authority’s legal counsel, Shapiro, allowed this to go on despite a bylaw saying board meetings were to be held monthly.

How exactly this happened is a mystery that was not examined or even asked about in the Foley Hoag report, and Foley Hoag’s dual role as part of the two-year, eight-month so-called “quiet period” and then examining what happened in that time was a theme sounded by speaker after speaker.

“You have legal counsel writing a report on its own activities,” Tom Stohlman noted, followed by  Heather Hoffman calling it “such a colossal conflict of interest,” Carol Ballew saying that, “if anything, I’d have expected an independent review,” Michael Brandon asking for “outside counsel at the very least and possibly even with law enforcement authority” and Charles Teague summing up that “it’s clear bad things happened. Unfortunately, it’s clear the bad things continue.”

While asking that there be no scapegoating — clearly not a worry with the Foley Hoag report — resident Steve Kaiser targeted City Manager Robert W. Healy during public comment as being slow to fill vacancies after being warned long ago there was a need. Asked who had warned Healy, Kaiser said it was Tulimieri itself who said he had alerted the city manager to the problem, and said copies of those communications were somewhere in authority files.

In March, contrary to saying he was sounding the alarm, Tulimieri told Cambridge Chronicle reporter Andy Metzger that he had three board members and that it wasn’t “interfering with any of the decisions that have to be made. [It’s] just the simple matter of collecting a quorum.”

On Aug. 22, though, after Tulimieri talked about his inability to get a board member to sign a budget audit, he was asked directly what he did to alert Healy or anyone else that board members were needed. His answer: “The individual responsible for appointing the board, and the City Council — responsible for concurring in that — was well aware of what they had to do.”

When asked how Healy and the council were “well aware,” he said only:

You have an agency, and you have members appointed by the City Council and that body, an appointing authority, should know when term limits expire.

“May be all the board decides we need”

Still, it is unclear if any board members will show interest in exploring why Tulimieri and Shapiro let the lack of board members and meetings go for some 32 months. There has been little interest so far, despite months of public comment and media reports asking how and why the “quiet period” situation dragged on, resulting in an ongoing furor and extended complications over the Boston Properties project — which was presented by Healy as being a matter of urgency but has not broken ground nearly seven months later.

“I want to assure members of the public that if the board has any reservations or worries about this, we can always ask for an independent review,” Born said. “But right now this is definitely the place to start. This law firm knew the material better than anybody else. It may be all the board decides we need and it may be a beginning, but we needed this context in order to begin to have this discussion about whether there was anything that needed to be remedied or redone or not.”

As the board takes potentially the next several months to discuss the report, it is also talking with an independent consultant about how it will operate after Tulimieri leaves. He retired Dec. 31, 2010, during the “quiet period” when there was no active board, and decided to stay on working part-time at $113 per hour. Last year, between his retirement benefits and part-time wages he took home about $222,898.